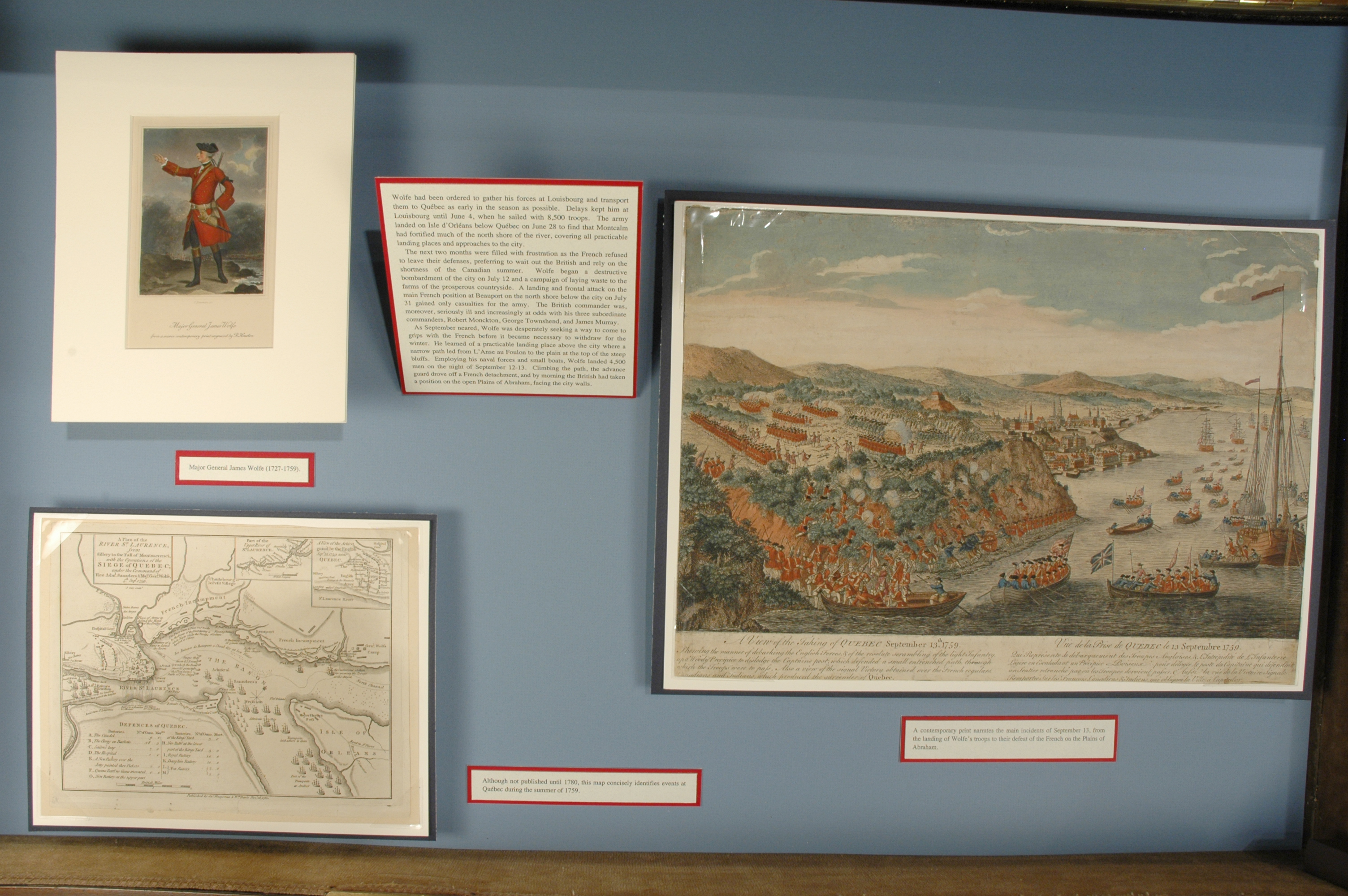 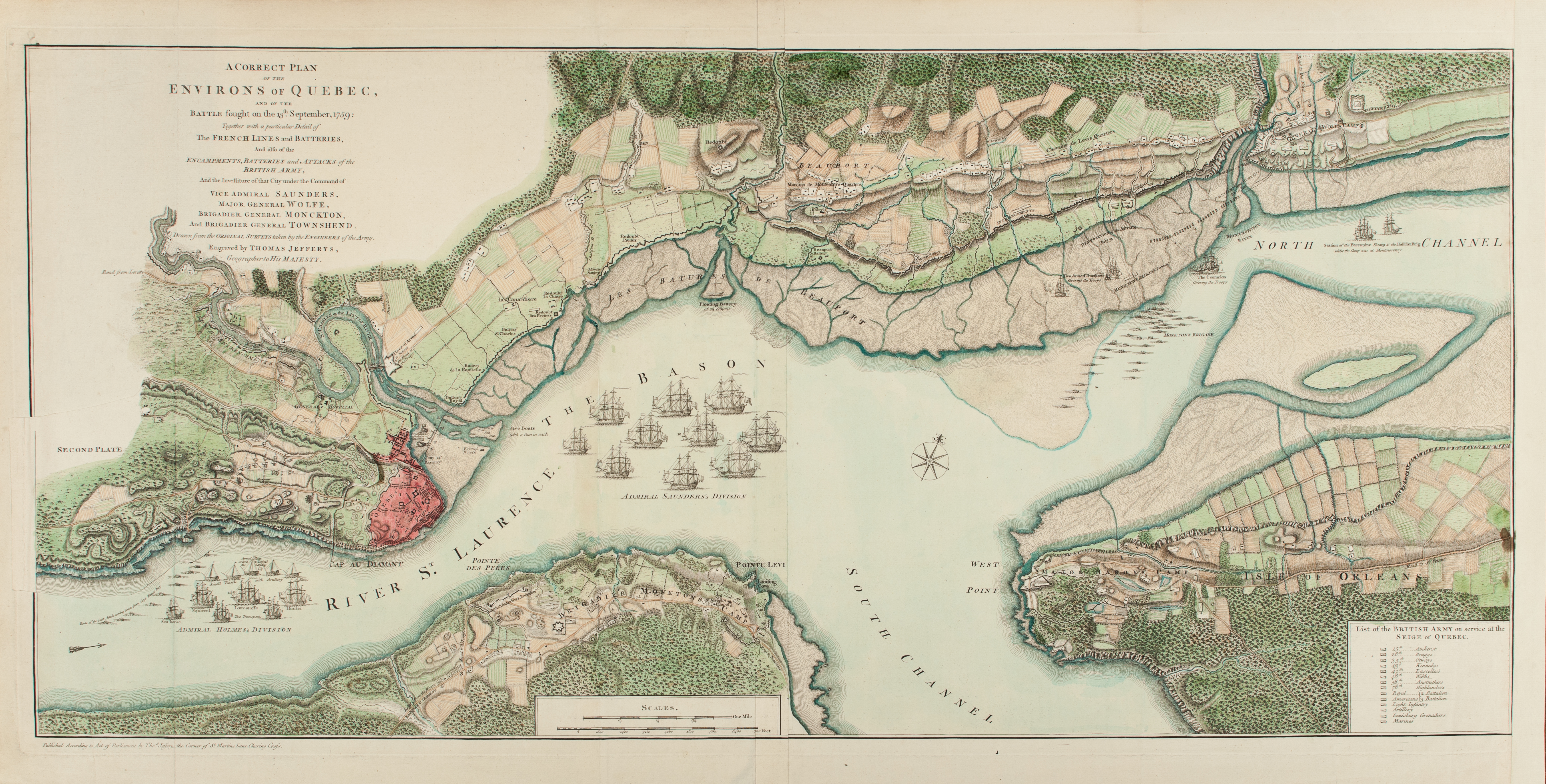 Wolfe gathered his forces at Louisbourg and transported them to Québec as early in the season as possible.  Various delays kept him at Louisbourg until June 4, when he sailed with 8,500 troops.  The army landed on Isle d’Orléans below Québec on June 28 to find that Montcalm had fortified much of the north shore of the river, covering all practicable landing places and approaches to the city.

Thomas Jefferys’s finely detailed topographical map summarizes the major events of Wolfe’s blockade of Québec.  The battlefield of September 13 (left) includes an overlay that lifts to allow a reader to see both the first and final positions of Wolfe’s troops. 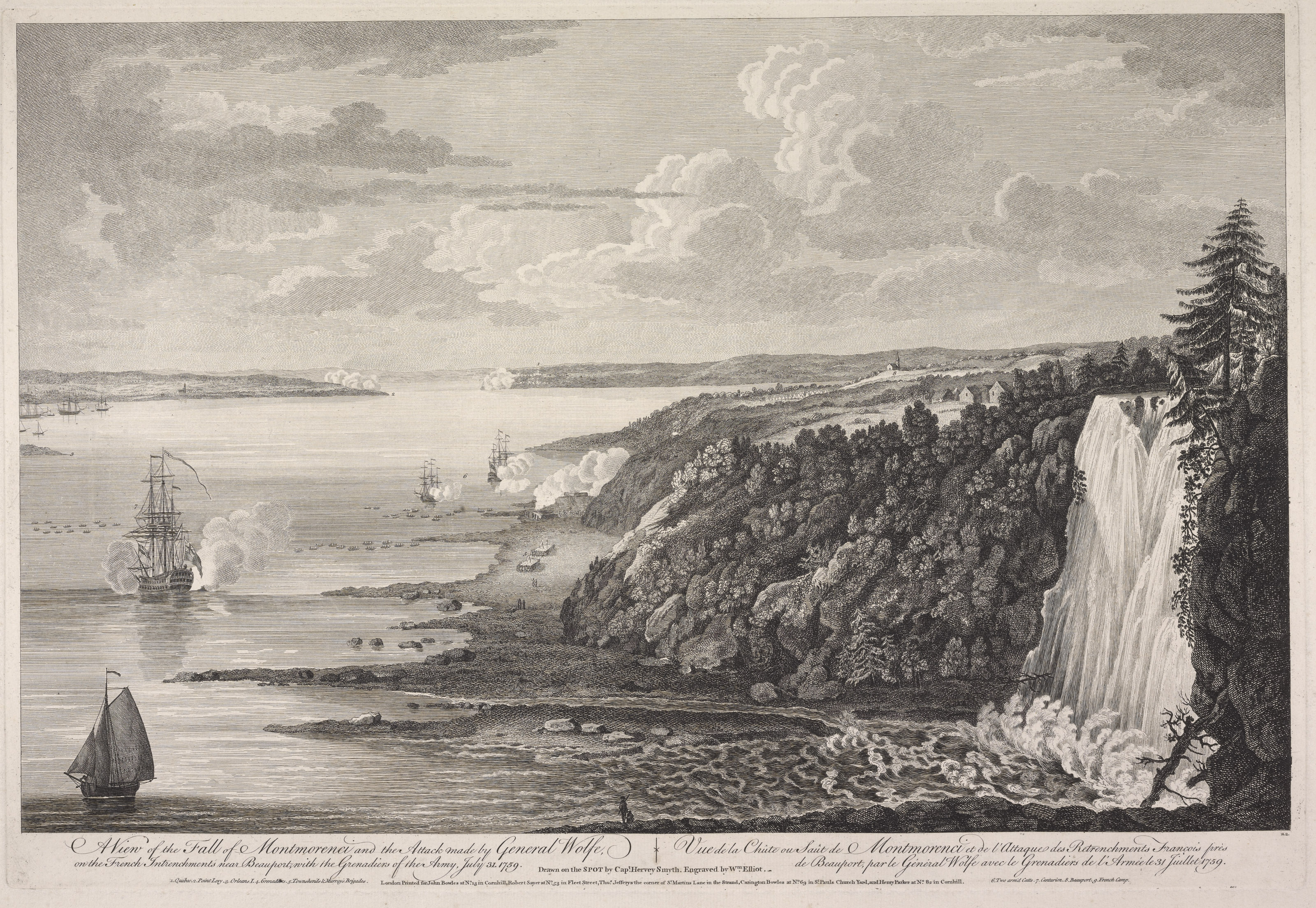 William Elliot (1727-1766), engraver, after Hervey Smyth (1734-1811), A View of the Fall of Montmorenci and the Attack made by General Wolfe, on the French Intrenchments near Beauport with the Grenadiers of the Army, July 31st 1759. From Scenographia Americana. Copperplate engraving. London, [1768]. Graphics Division, Prints.

The next two months were filled with frustration as the French refused to leave their defenses, preferring to wait out the British and rely on the shortness of the Canadian summer.  Wolfe began a destructive bombardment of the city on July 12 as well as a campaign of laying waste to the farms of the prosperous countryside.  A landing and frontal attack on the main French position at Beauport on the north shore below the town on July 31, however, gained only casualties for Wolfe’s army.

Hervey Smyth’s view includes the landing and battle on the Beauport shore in the middle distance.  French general the Marquis de Montcalm had fortified the high ground from the falls to the town, seen in the distance.  His troops easily repulsed the British attack of July 31.

As the summer wore on, it was apparent that the British commander was seriously ill and increasingly at odds with his three subordinate brigadiers, Robert Monckton (1726-1782), George Townshend (1724-1807), and James Murray (1721-1794).  Wolfe needed somehow to bring the defenders to battle. 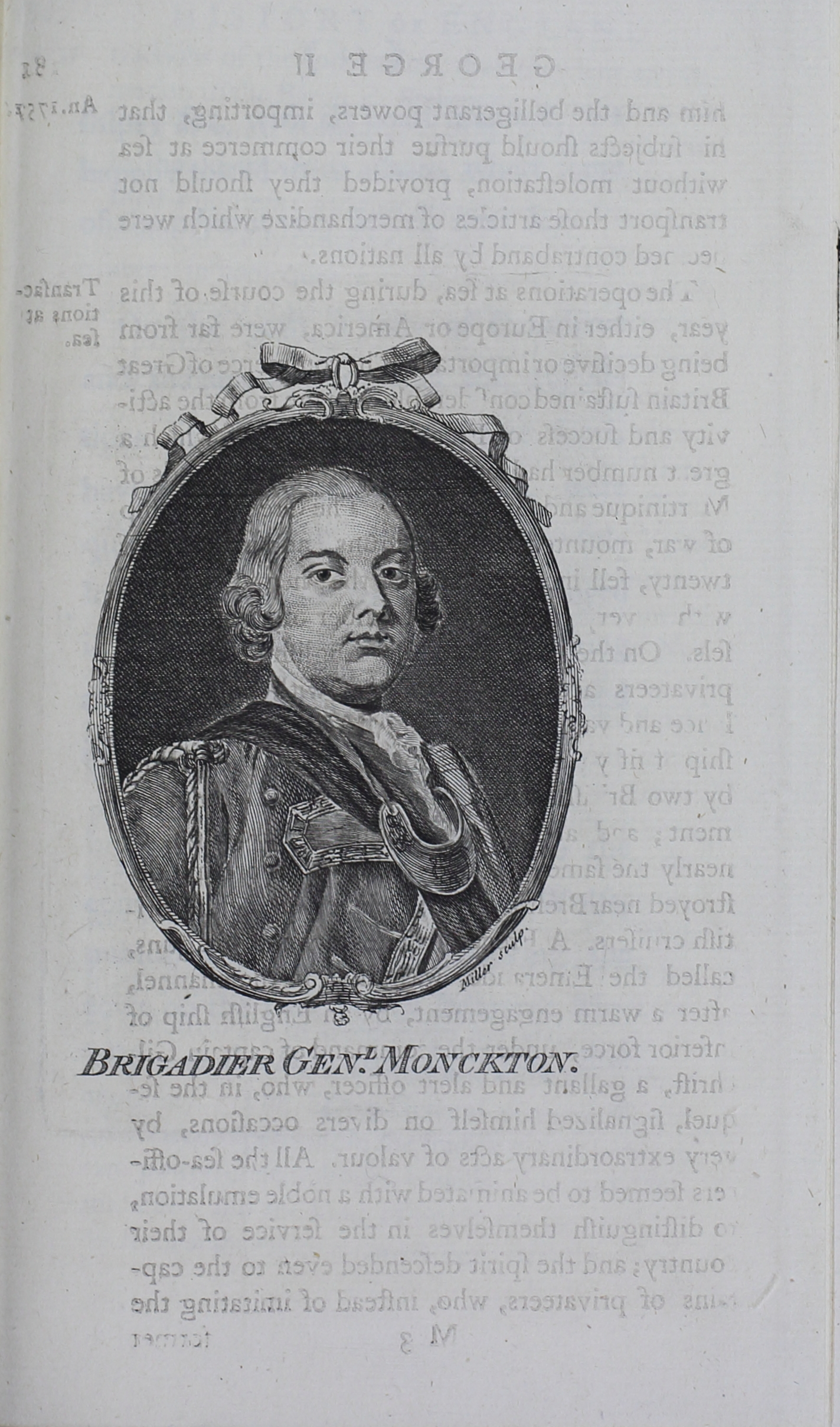 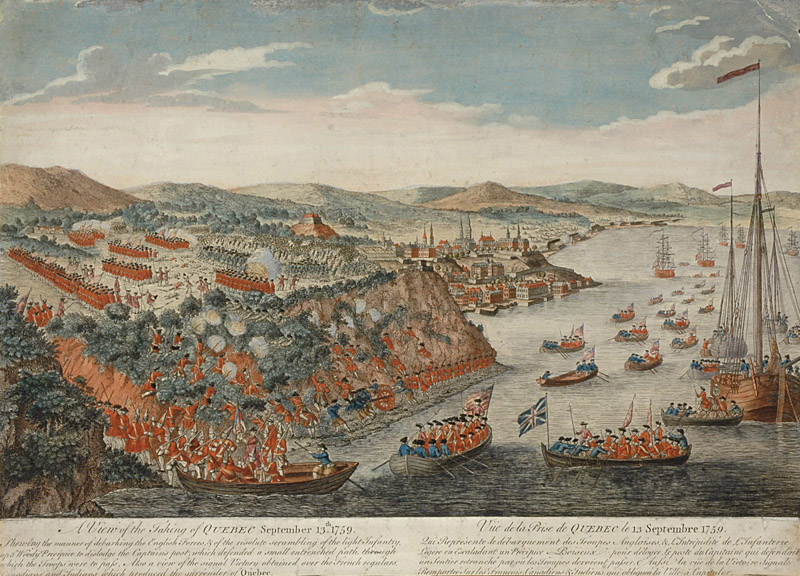 As September neared, Wolfe was desperately seeking a way to come to grips with the French before it became necessary to withdraw for the winter.  He learned of a practicable landing place above the city where a narrow footpath led from l’Anse au Foulon to the plain at the top of the steep bluffs.  Employing his naval forces and small boats, Wolfe landed 4,500 men on the night of September 12-13.  Climbing the path, the advance guard drove off a French detachment, and by morning the British had taken a position on the open Plains of Abraham, facing the town walls.

This eighteenth-century print is one of several versions of a scene that first appeared in the London Magazine of May 1760.  The composition narrates the main incidents of the landing and battle with no regard for scale. 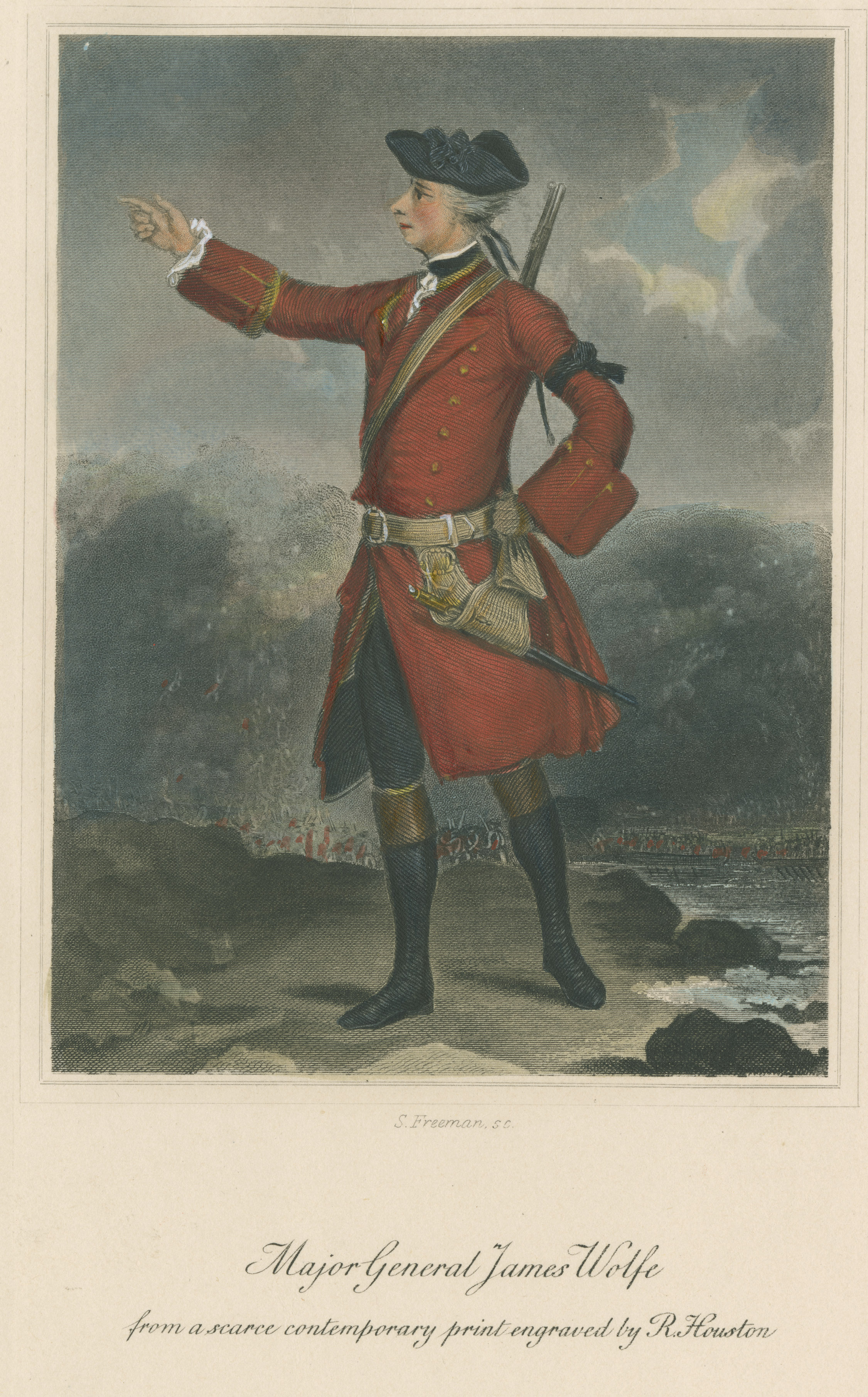 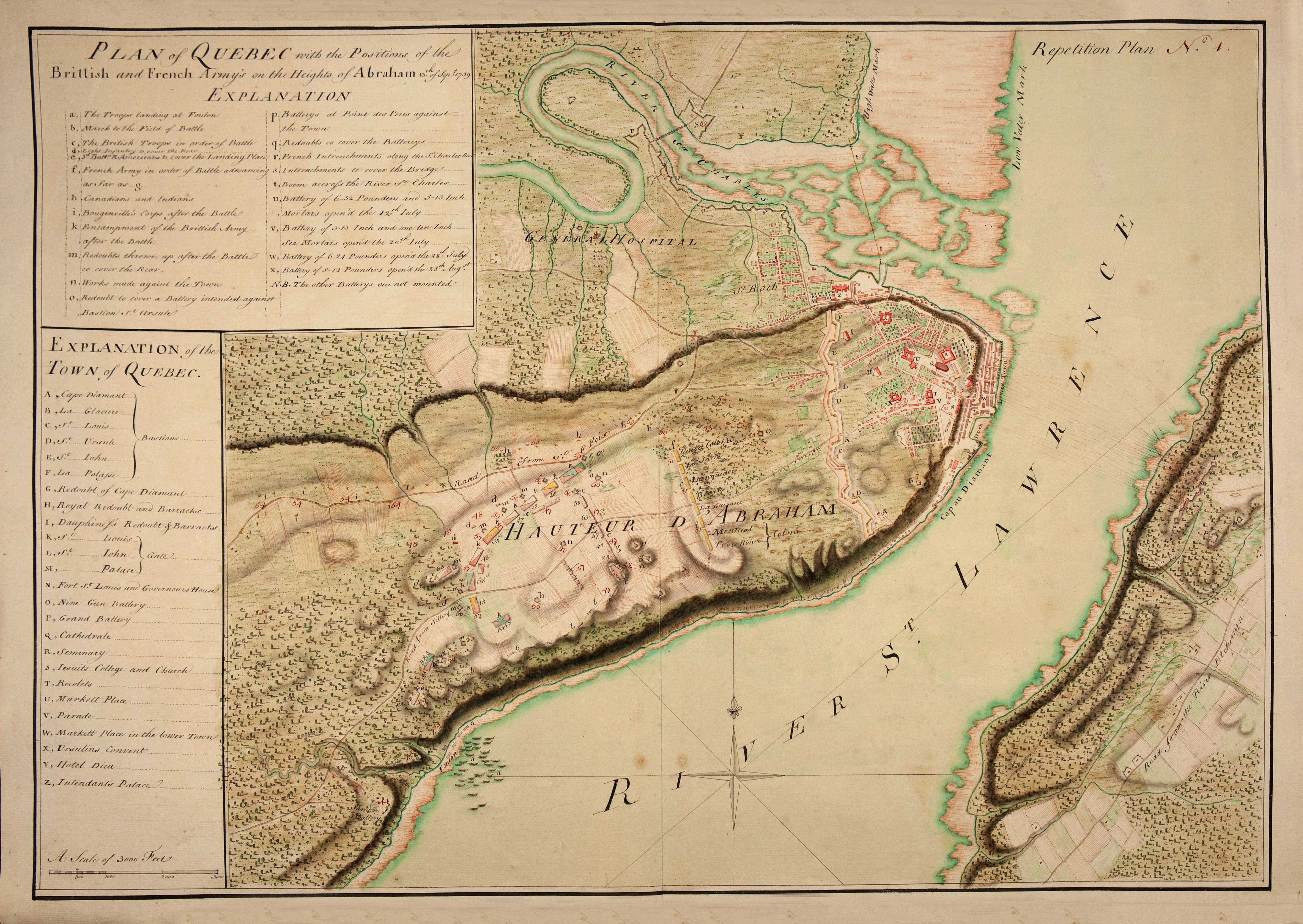