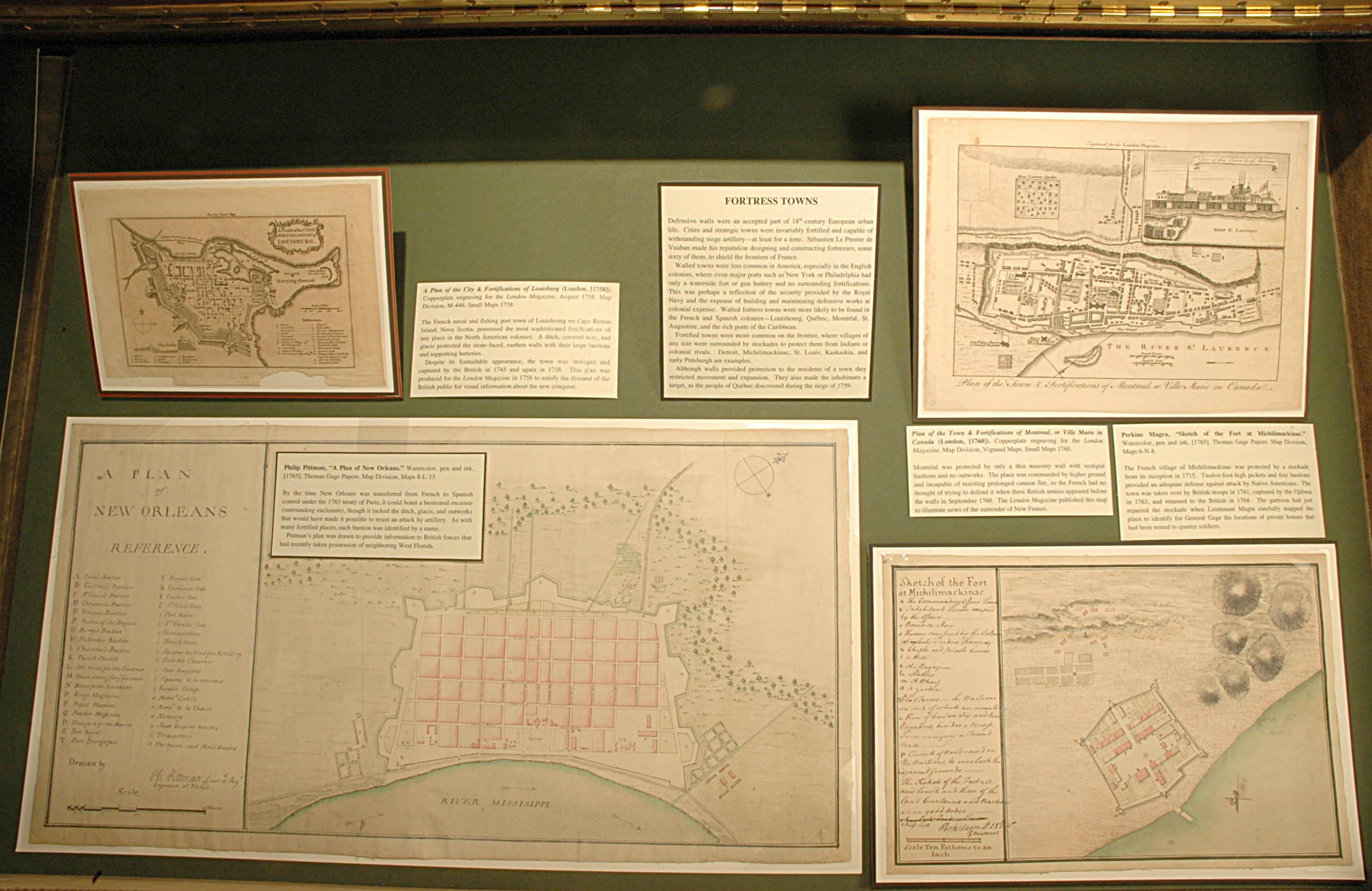 Defensive walls were an accepted part of 18th-century European urban life.  Cities and strategic towns were invariably fortified and capable of withstanding siege artillery—at least for a time.  Sébastien Le Prestre de Vauban made his reputation designing and constructing fortresses, some sixty of them, to shield the frontiers of France.

Walled towns were less common in America, especially in the English colonies, where even major ports such as New York or Philadelphia had only a waterside fort or gun battery and no surrounding fortifications.  This was perhaps a reflection of the security provided by the Royal Navy and the expense of building and maintaining defensive works at colonial expense. Walled fortress towns were more likely to be found in the French and Spanish colonies—Louisbourg, Québec, Montréal, St. Augustine, and the rich ports of the Caribbean.

Fortified towns were more common on the frontier, where villages of any size were surrounded by stockades to protect them from Indians or colonial rivals.  Detroit, Michilimackinac, St. Louis, Kaskaskia, and early Pittsburgh are examples.

Although walls provided protection to the residents of a town they restricted movement and expansion.  They also made the inhabitants a target, as the people of Québec discovered during the siege of 1759. 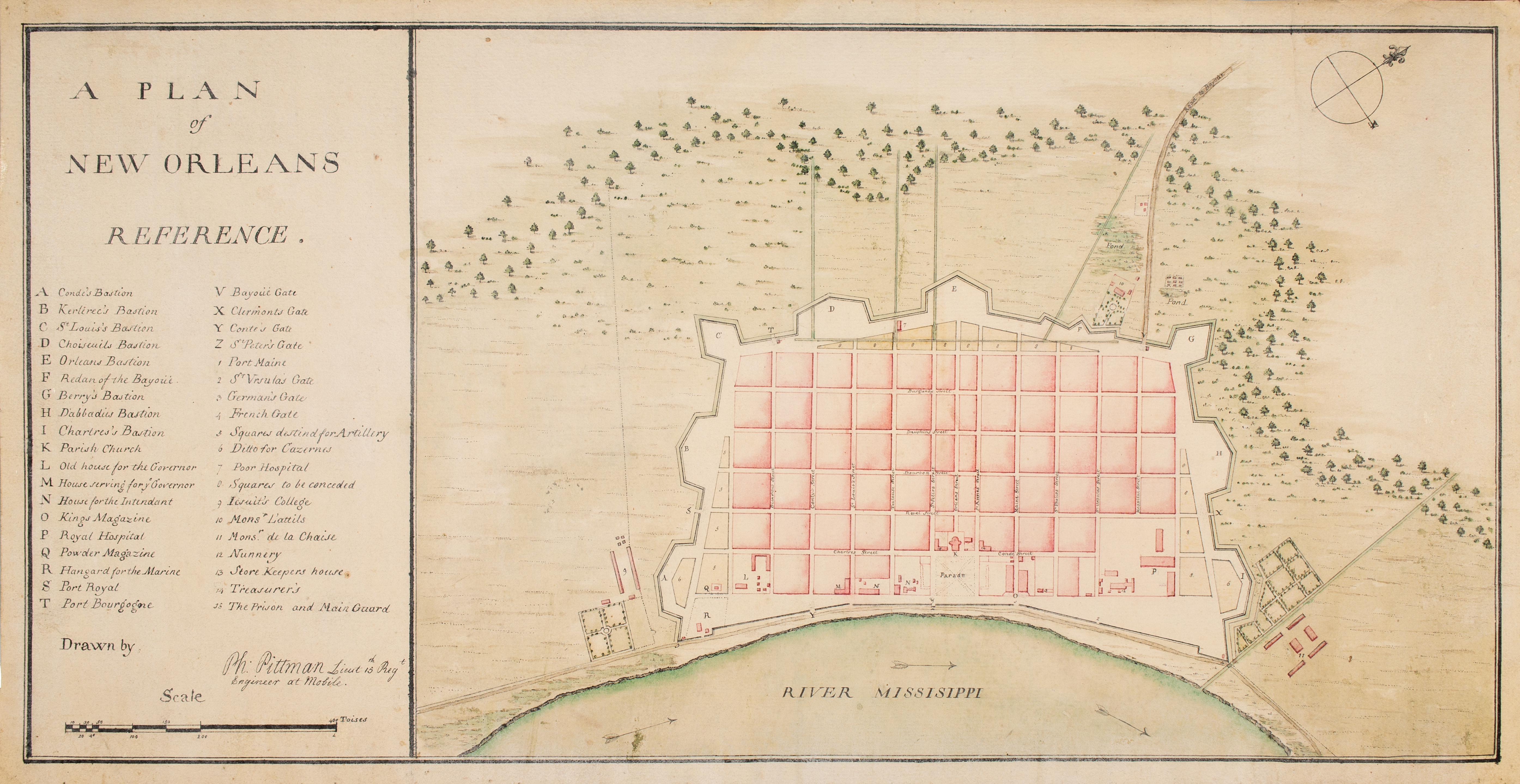 By the time New Orleans was transferred from French to Spanish control under the 1763 treaty of Paris, it could boast a bastioned enceinte (surrounding enclosure), though it lacked the ditch, glacis, and outworks that would have made it possible to resist an attack by artillery.  As with many fortified places, each bastion was identified by a name.

Pittman’s plan was drawn to provide information to British forces that had recently taken possession of neighboring West Florida.

The French village of Michilimackinac was protected by a stockade from its inception in 1715.  Twelve-foot-high pickets and tiny bastions provided an adequate defense against attack by Native Americans.  The town was taken over by British troops in 1761, captured by the Ojibwa in 1763, and returned to the British in 1764.  The garrison had just repaired the stockade when Lieutenant Magra carefully mapped the place to identify for General Gage the locations of private houses that had been rented to quarter soldiers. 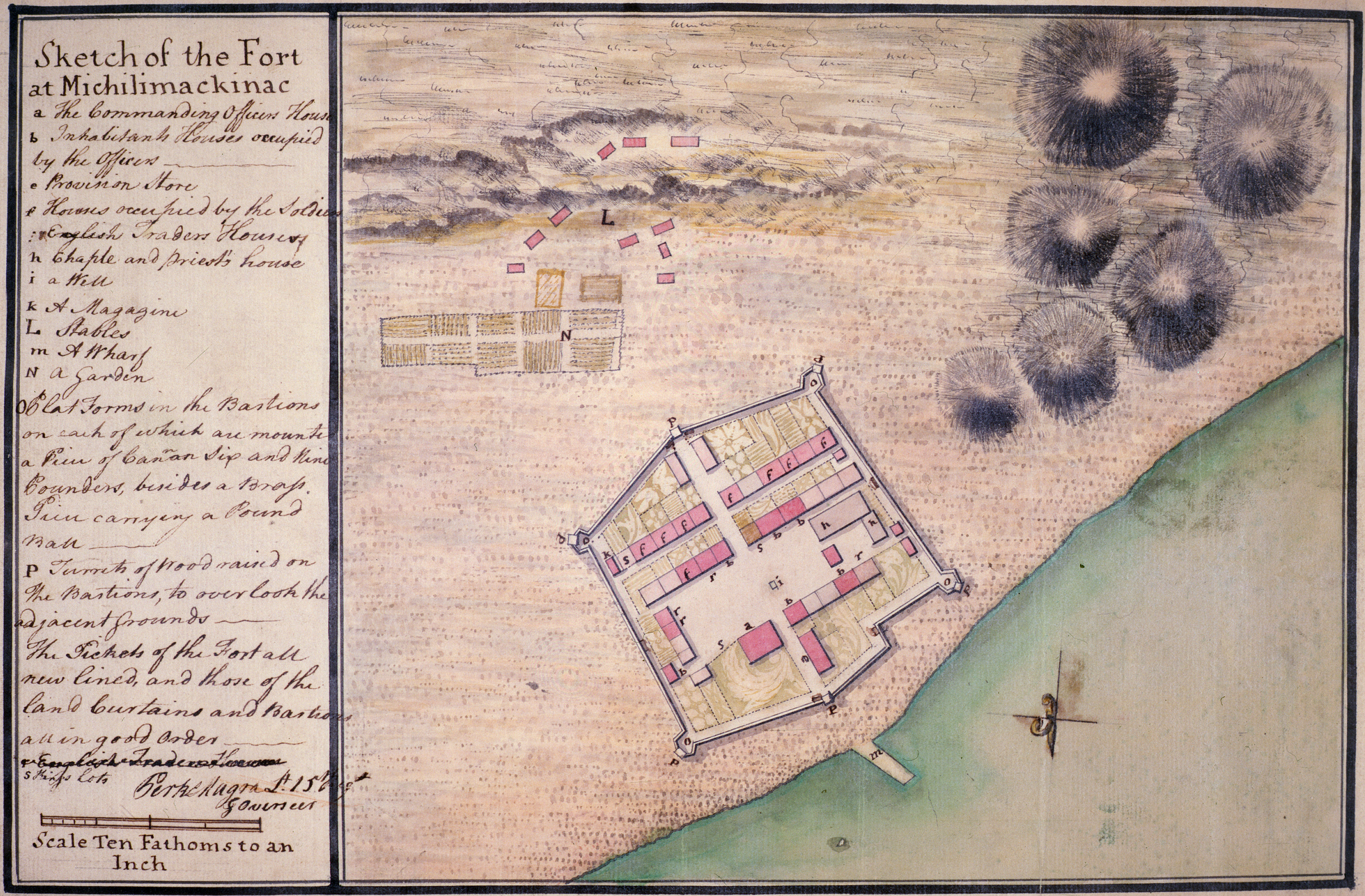 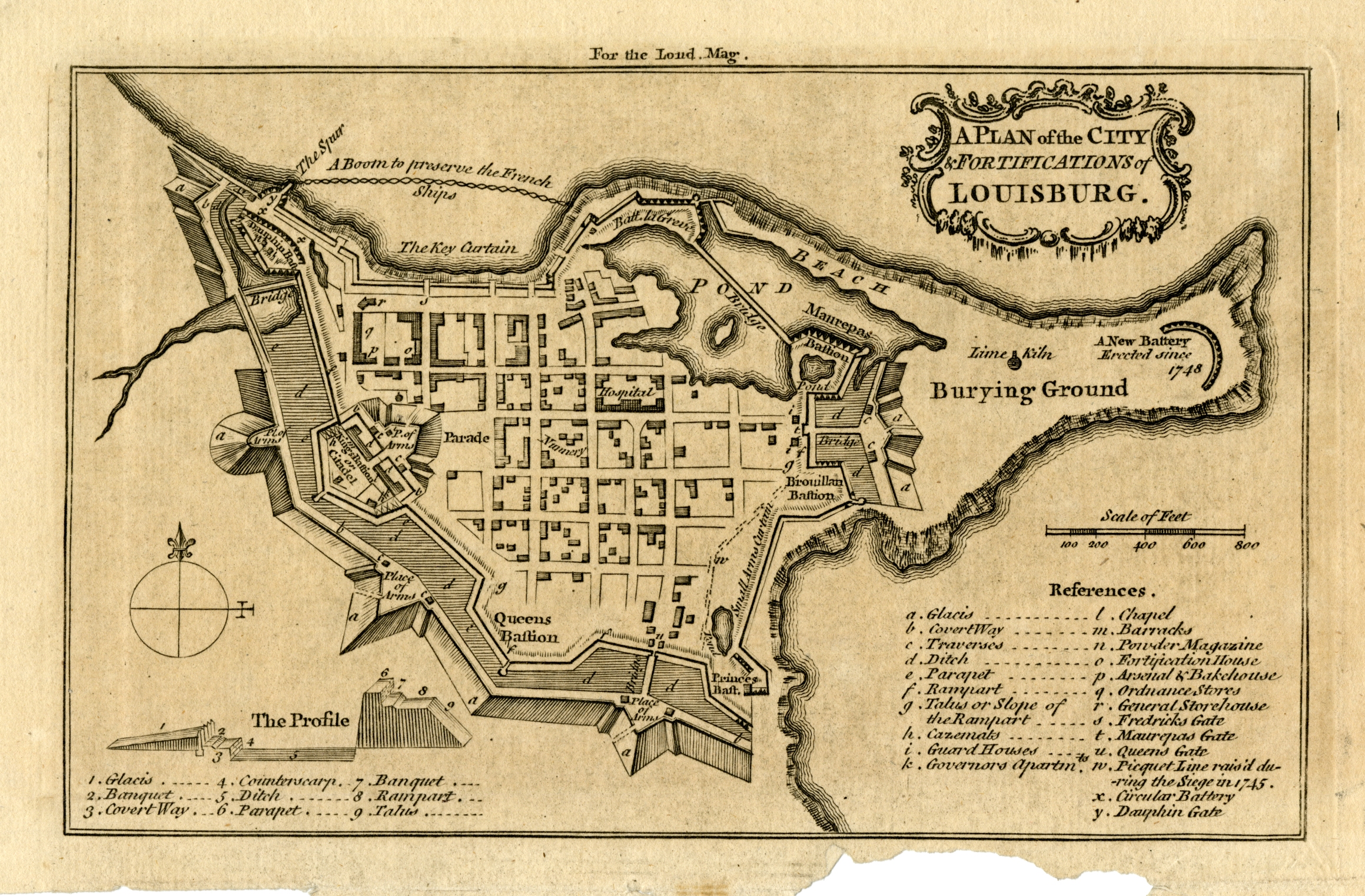 The French naval and fishing port town of Louisbourg on Cape Breton Island, Nova Scotia, possessed the most sophisticated fortifications of any place in the North American colonies.  A ditch, covered way, and glacis protected the stone-faced, earthen walls with their large bastions and supporting batteries.

Despite its formidable appearance, the town was besieged and captured by the British in 1745 and again in 1758.  This plan was produced for the London Magazine in 1758 to satisfy the demand of the British public for visual information about the new conquest.

Montréal was protected by only a thin masonry wall with vestigial bastions and no outworks.  The place was commanded by higher ground and incapable of resisting prolonged cannon fire, so the French had no thought of trying to defend it when three British armies appeared before the walls in September 1760.  The London Magazine published this map to illustrate news of the surrender of New France. 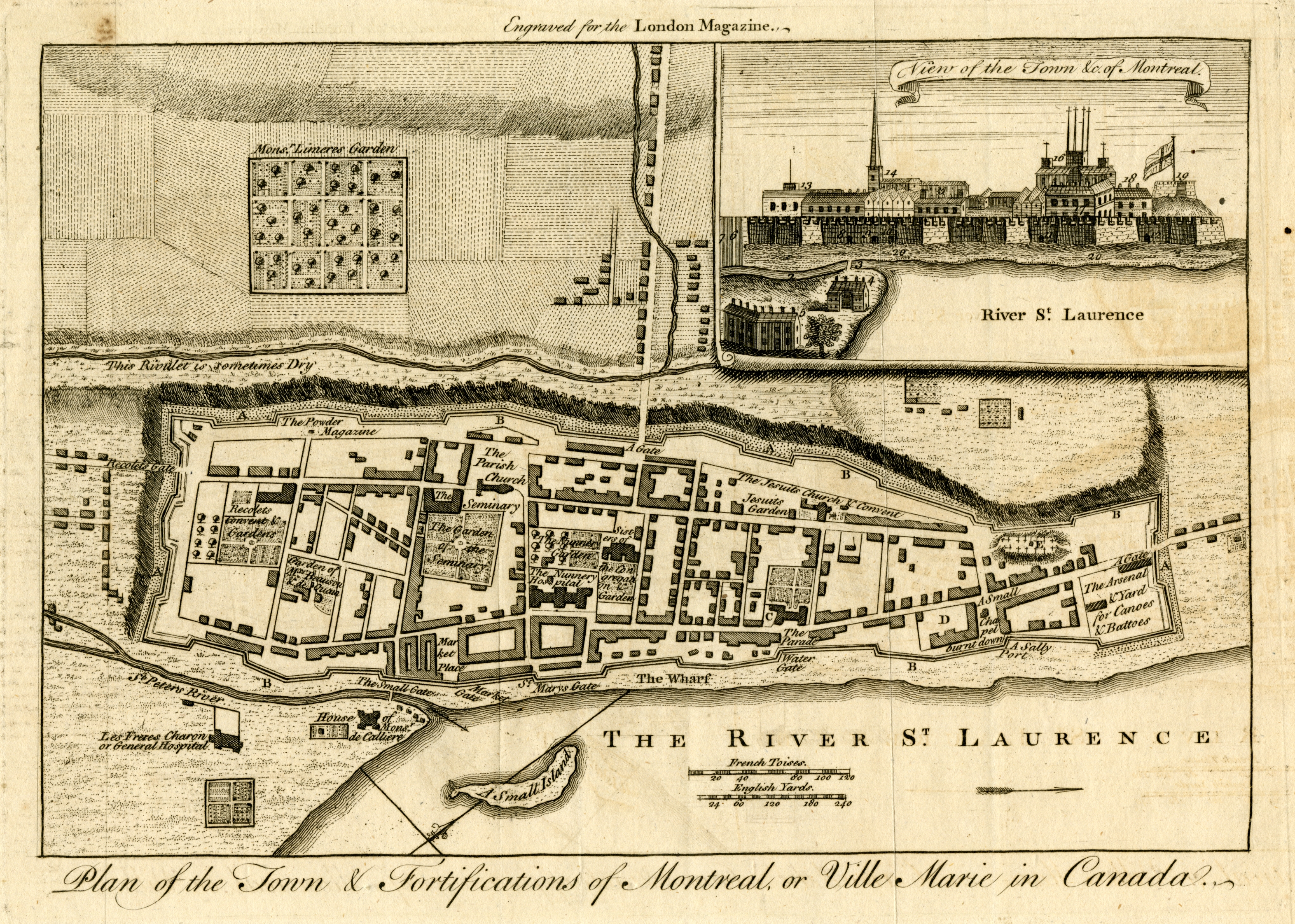 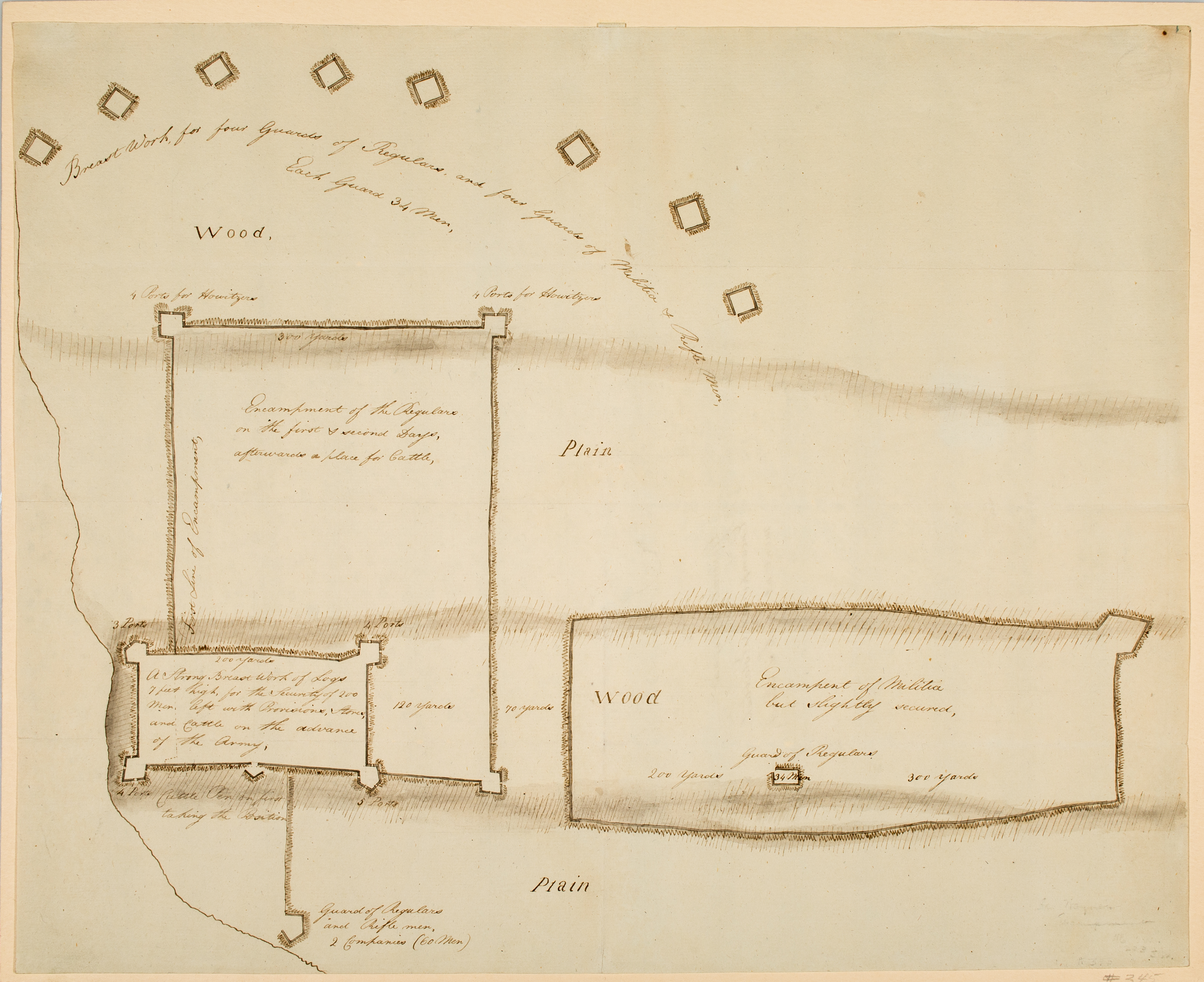 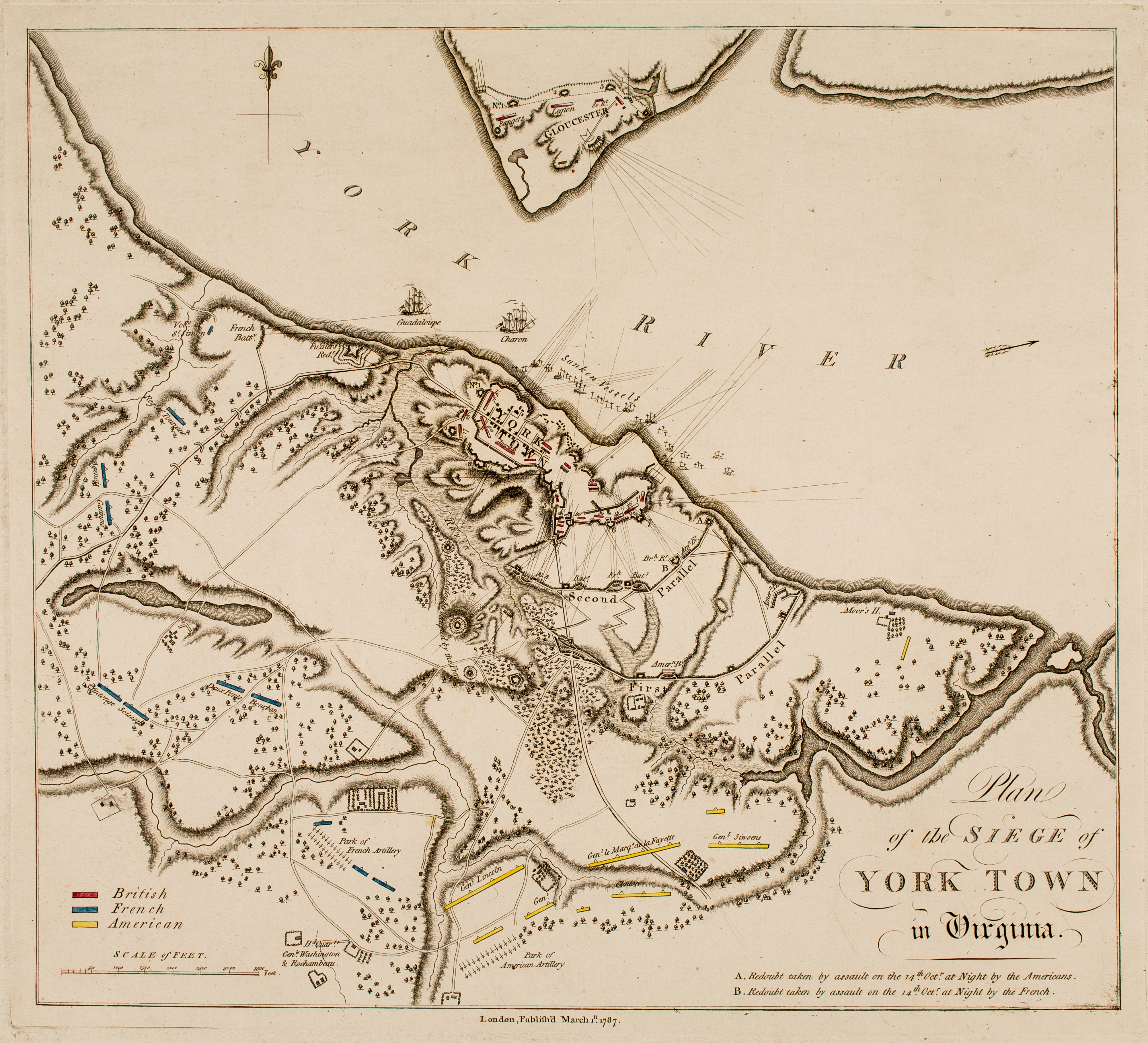