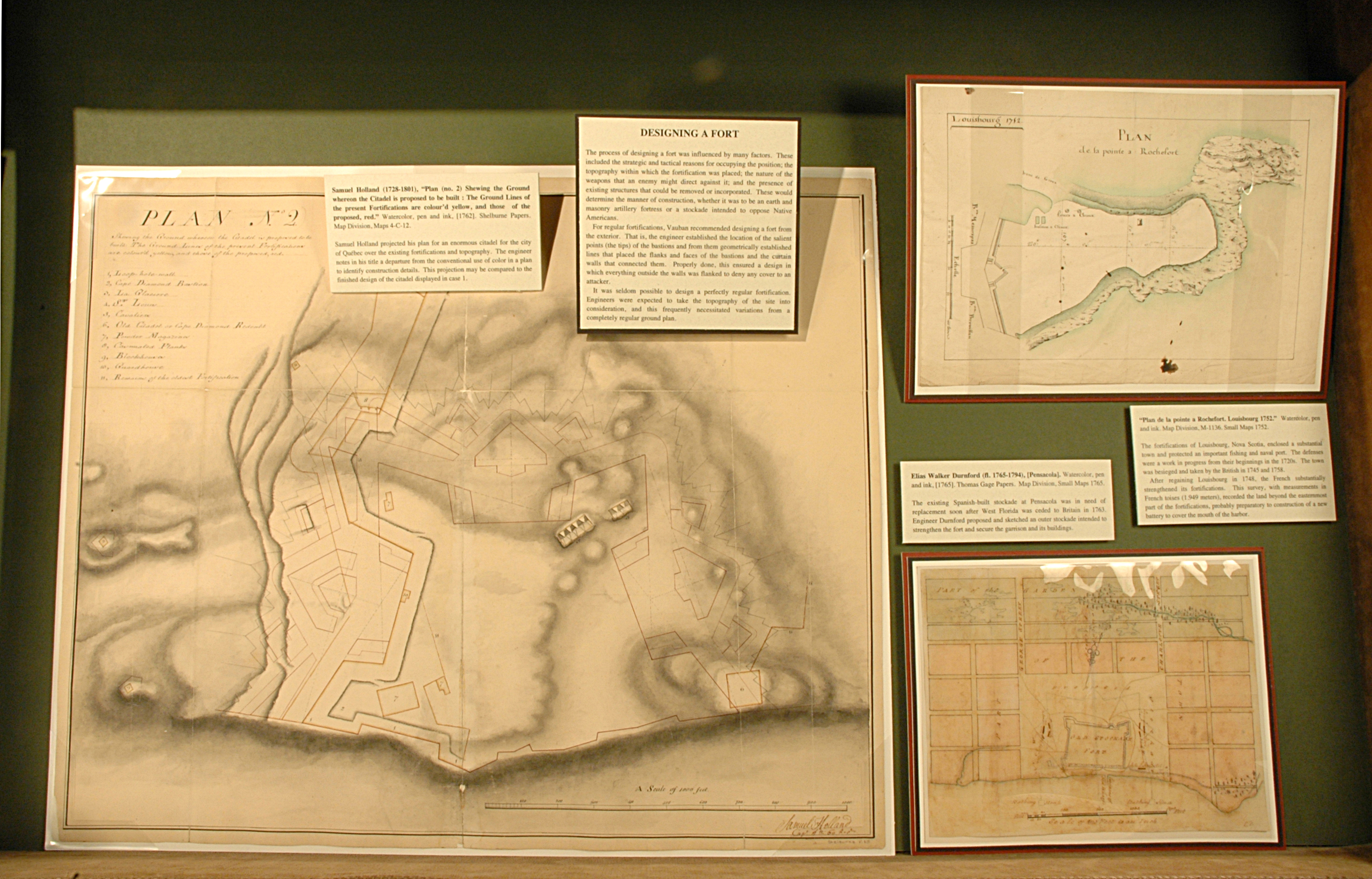 The process of designing a fort was influenced by many factors.  These included the strategic and tactical reasons for occupying the position; the topography within which the fortification was placed; the nature of the weapons that an enemy might direct against it; and the presence of existing structures that could be removed or incorporated.  These would determine the manner of construction, whether it was to be an earth and masonry artillery fortress or a stockade intended to oppose Native Americans.

For regular fortifications, Vauban recommended designing a fort from the exterior.  That is, the engineer established the location of the salient points (the tips) of the bastions and from them geometrically established lines that placed the flanks and faces of the bastions and the curtain walls that connected them.  Properly done, this ensured a design in which everything outside the walls was flanked to deny any cover to an attacker.

It was seldom possible to design a perfectly regular fortification.  Engineers were expected to take the topography of the site into consideration, and this frequently necessitated variations from a completely regular ground plan. 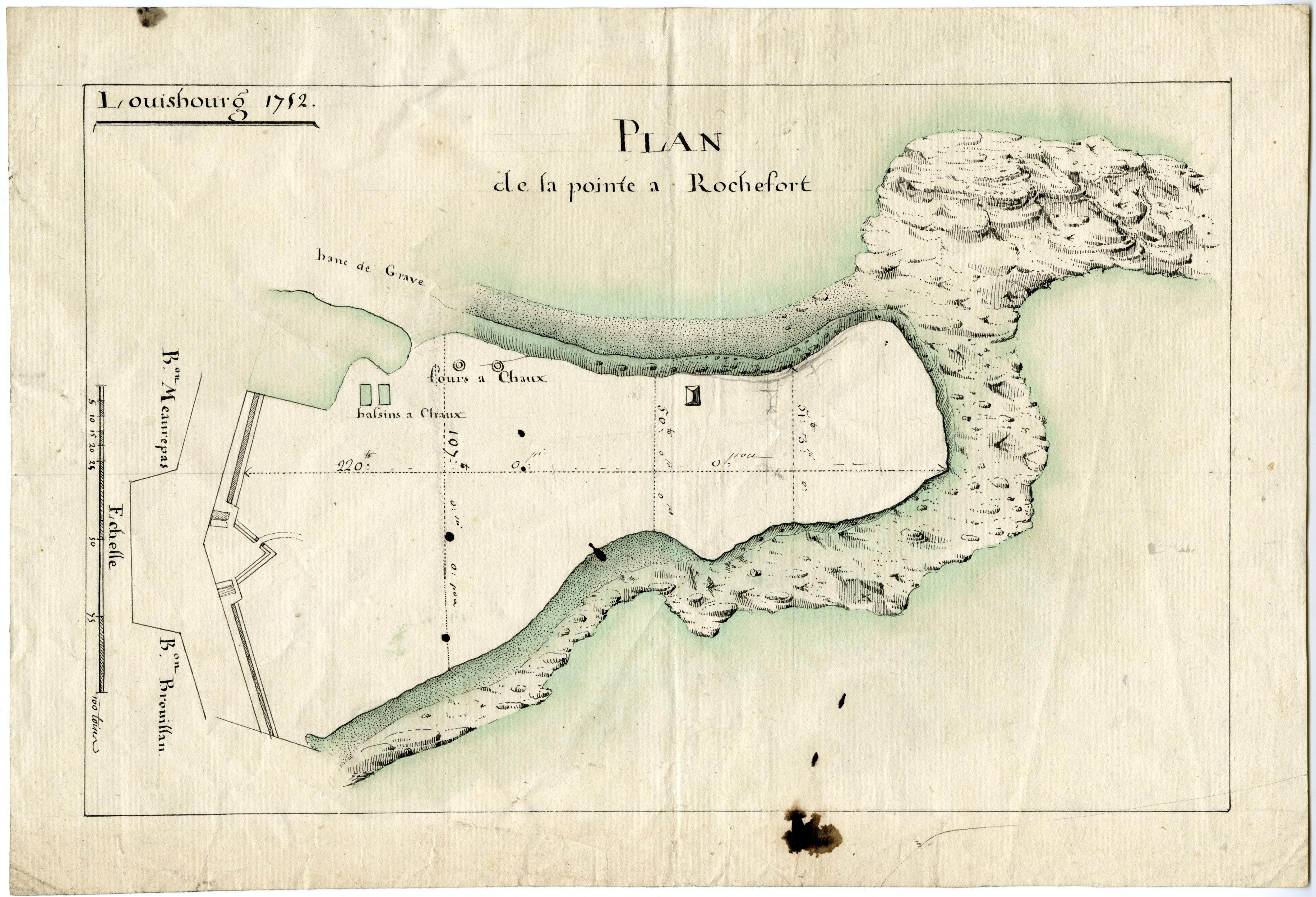 The fortifications of Louisbourg, Nova Scotia, enclosed a substantial town and protected an important fishing and naval port.  The defenses were a work in progress from their beginnings in the 1720s. The town was besieged and taken by the British in 1745 and 1758.

After regaining Louisbourg in 1748, the French substantially strengthened its fortifications.  This survey, with measurements in French toises (1.949 meters), recorded the land beyond the easternmost part of the fortifications, probably preparatory to construction of a new battery to cover the mouth of the harbor. 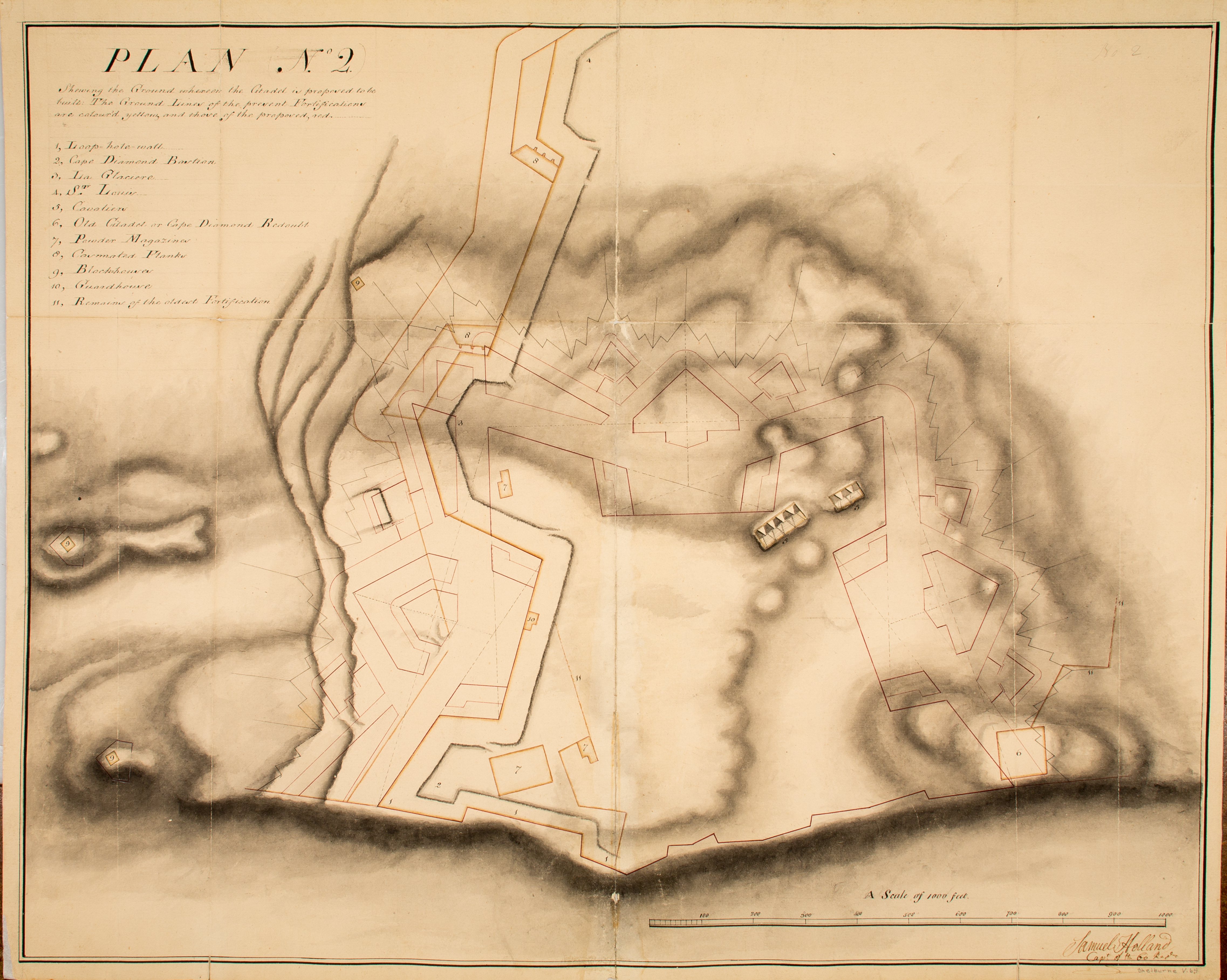 Samuel Holland projected his plan for an enormous citadel for the city of Québec over the existing fortifications and topography.  The engineer notes in his title a departure from the conventional use of color in a plan to identify construction details. This projection may be compared to the finished design of the citadel displayed in case 1. The existing Spanish-built stockade at Pensacola was in need of replacement soon after West Florida was ceded to Britain in 1763.  Engineer Durnford proposed and sketched an outer stockade intended to strengthen the fort and secure the garrison and its buildings. 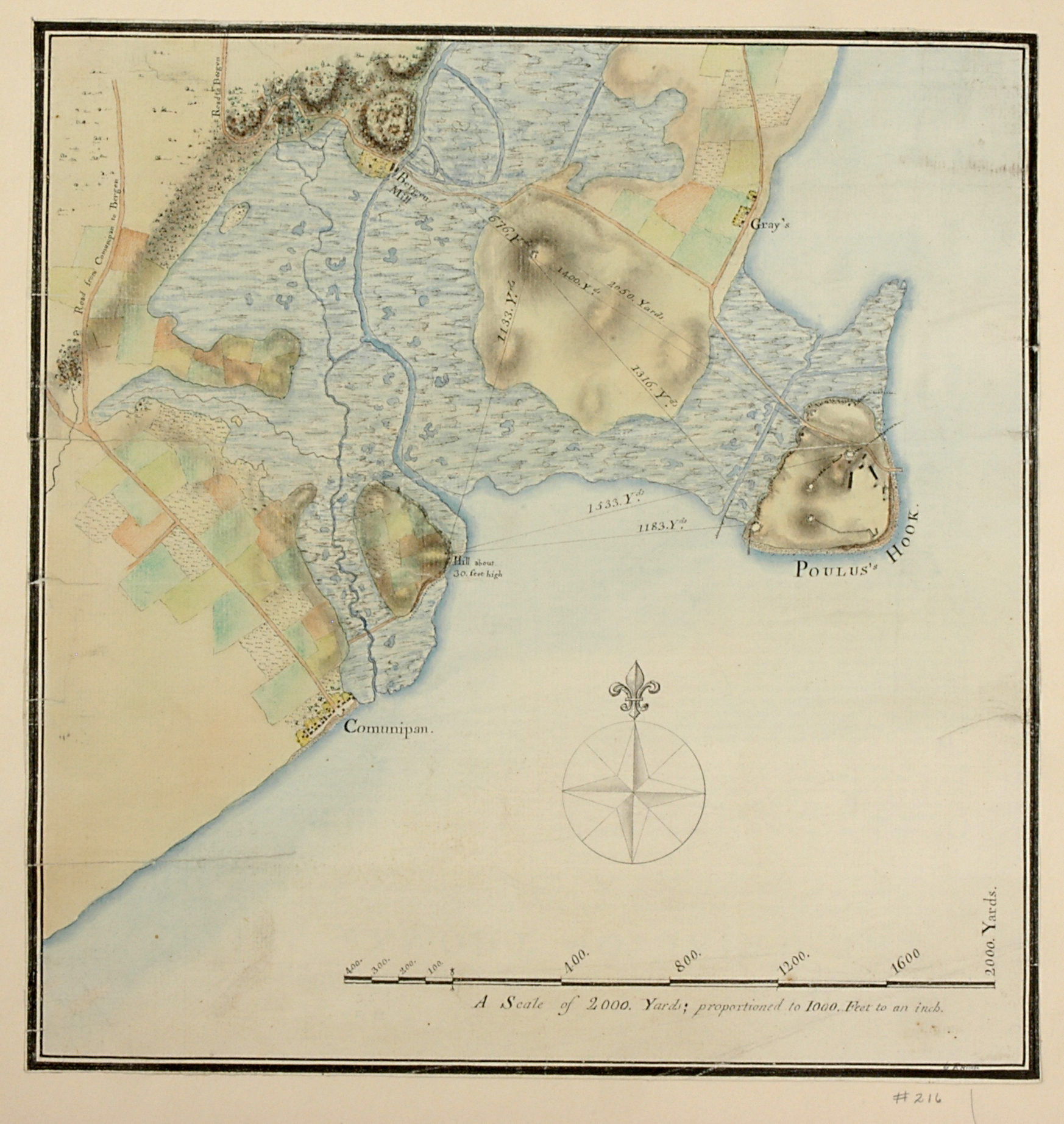 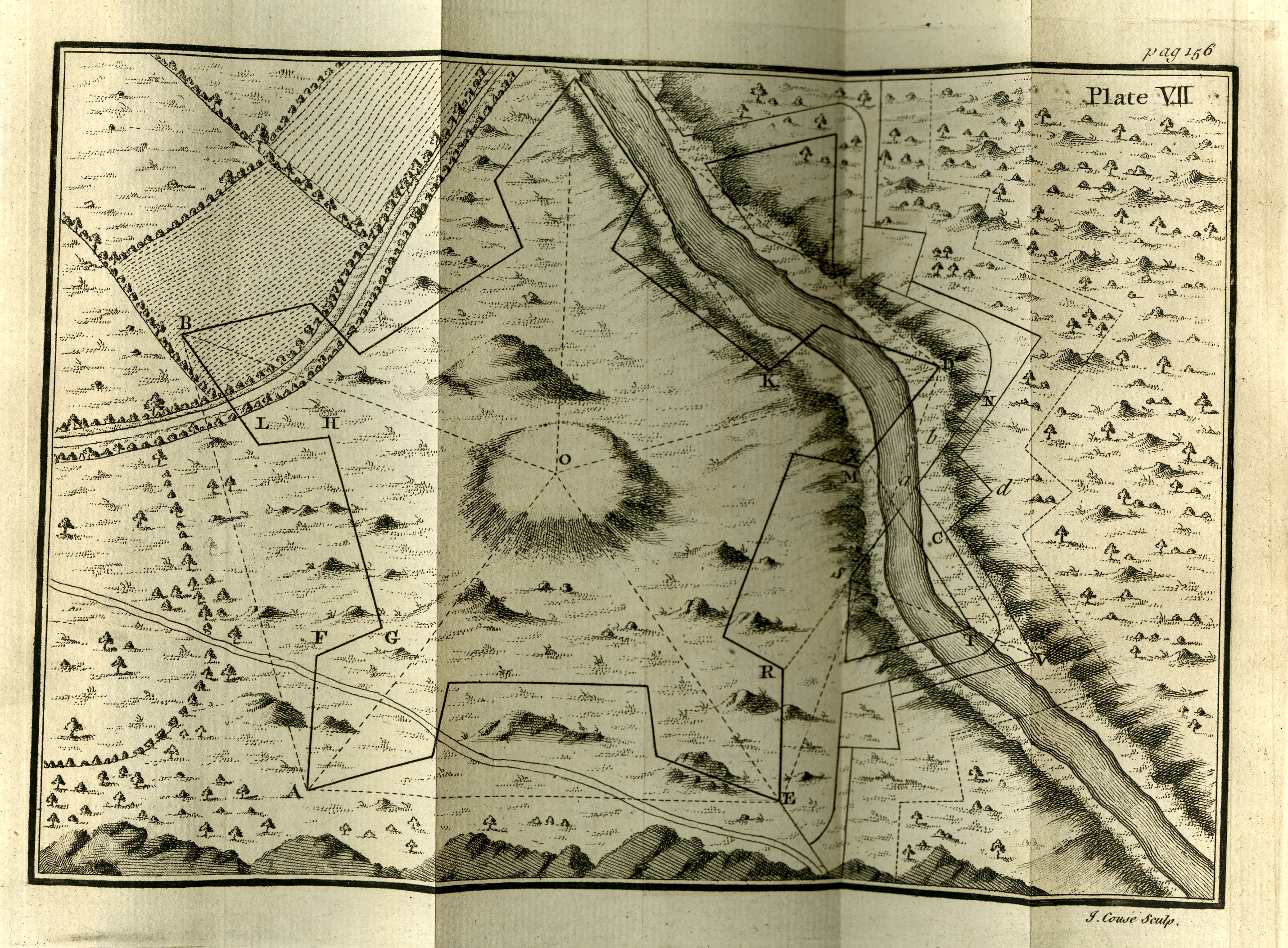