“Repeated Petitions”: The Many Declarations of Independence

The gathering of the Second Continental Congress in Philadelphia in the summer of 1776 is best known today through John Trumbull’s famous painting of the presentation of the draft of the Declaration of Independence. The original now hangs in the Capitol Rotunda in Washington, D.C., but reproductions of the work—such as this lithograph in the Clements Library collection, printed in 1876 for the nation’s Centennial—flooded the American market in the 19th century. The image shows 47 members of the Congress gathered in Philadelphia, with the committee that drafted the Declaration—including Thomas Jefferson, John Adams, and Benjamin Franklin—standing in the right foreground before a table at which John Hancock sits. 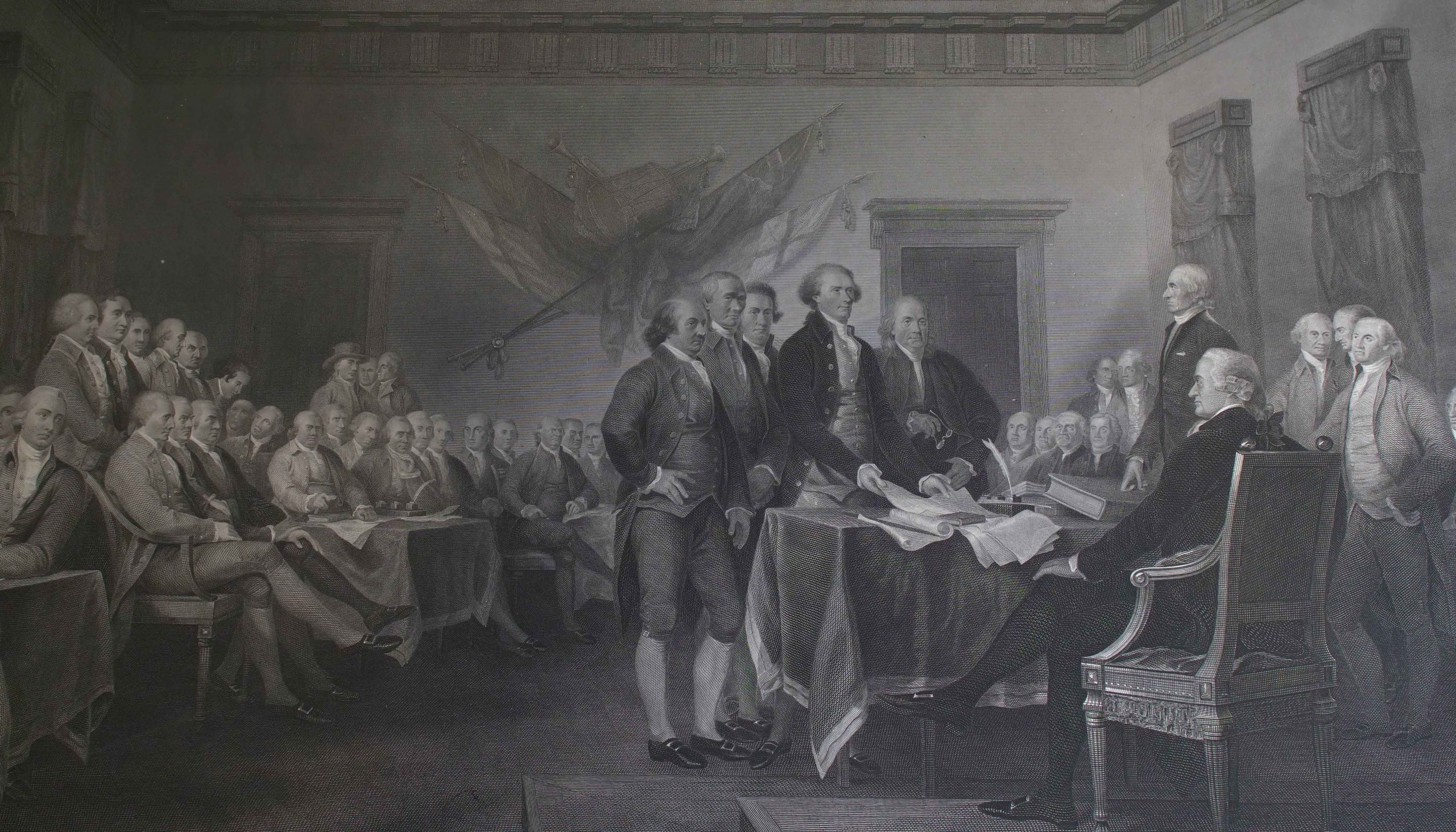 The painting presents a scene of Enlightenment rationality and reasoned debate over the principles of liberty, an impression that is at odds with the fact that 34 of the men in the scene enslaved other people. The disconnect between the Congress’ assertion of individual liberty and its members’ own behavior was apparent to observers even before the Declaration was written. As Samuel Johnson wrote in his 1775 essay “Taxation No Tyranny,” “How is it that we hear the loudest yelps for liberty among the drivers of negroes?” The conflict between the ideals embodied in the opening sentences of the Declaration and the new nation’s failure to guarantee liberty to all of its residents has been a source of struggle since 1776, as Professor Greg Dowd explains in this short video.

The Declaration of Independence was a remarkable document for its time, even coming as it did after years of political ferment and the outbreak of war. There is no better evidence for how truly revolutionary the Declaration was than how rapidly it spread.

We know that the first printed version of the Declaration was produced in broadside form by the Philadelphia printer John Dunlap on the night of July 4, 1776. Copies of this broadside (26 of which are known to exist today) were distributed up and down the Eastern Seaboard. Dunlap would reprint the full text of the Declaration in the July 8 issue of his newspaper, the Pennsylvania Packet, or the General Advertiser. 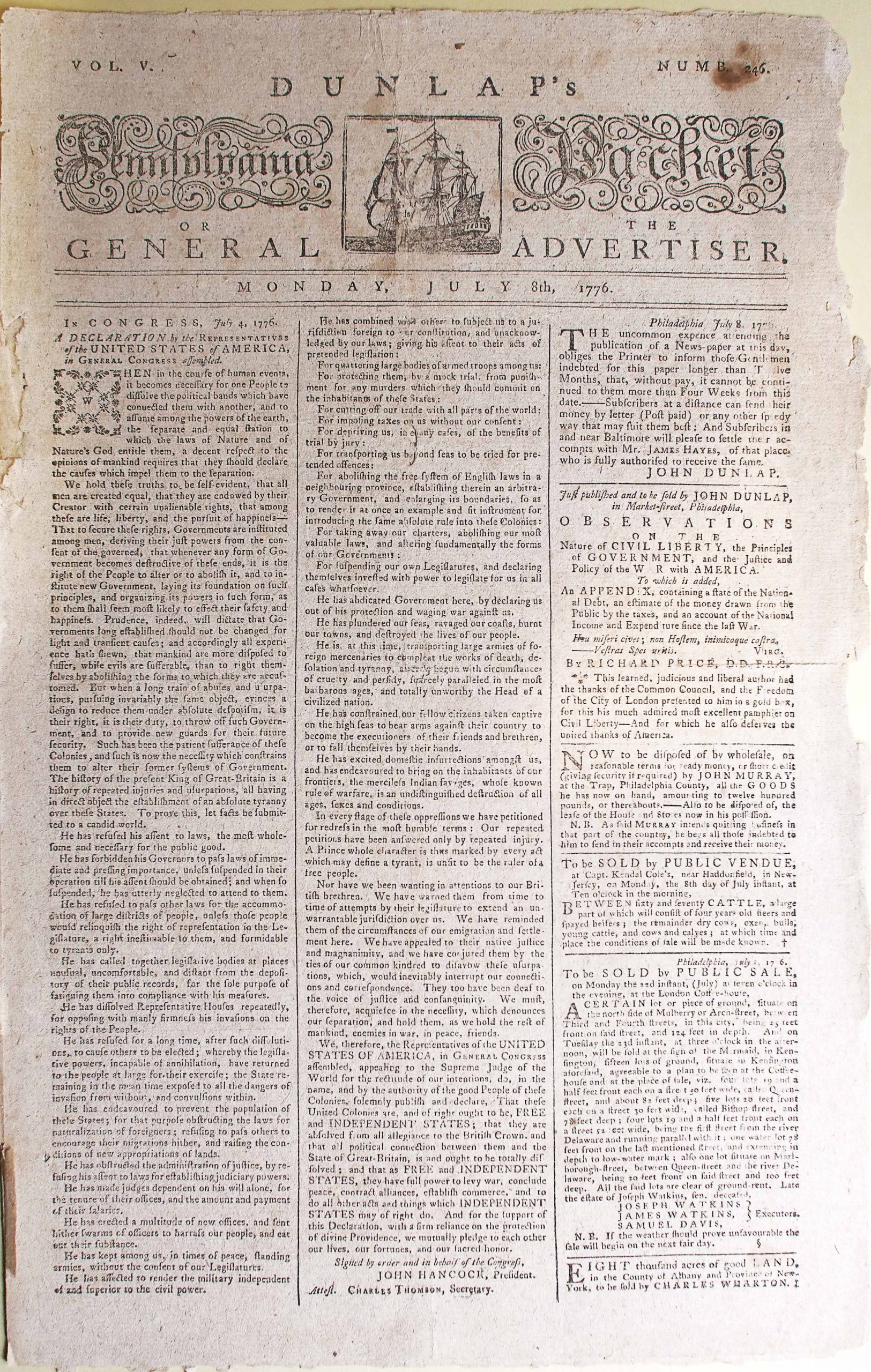 In an age before railroads, telegraphs, or steamboats, the text of the Declaration spread with remarkable speed. The Declaration first appeared in a printed book produced just blocks away from where the Declaration was written, in a Philadelphia edition of Allan Ramsay’s The Genuine Principles of the Saxon, or English Constitution. We are unsure of this book’s exact publication date, but it was printed by Robert Bell no later than July 8, 1776, based on a dated advertisement at the back of the book. 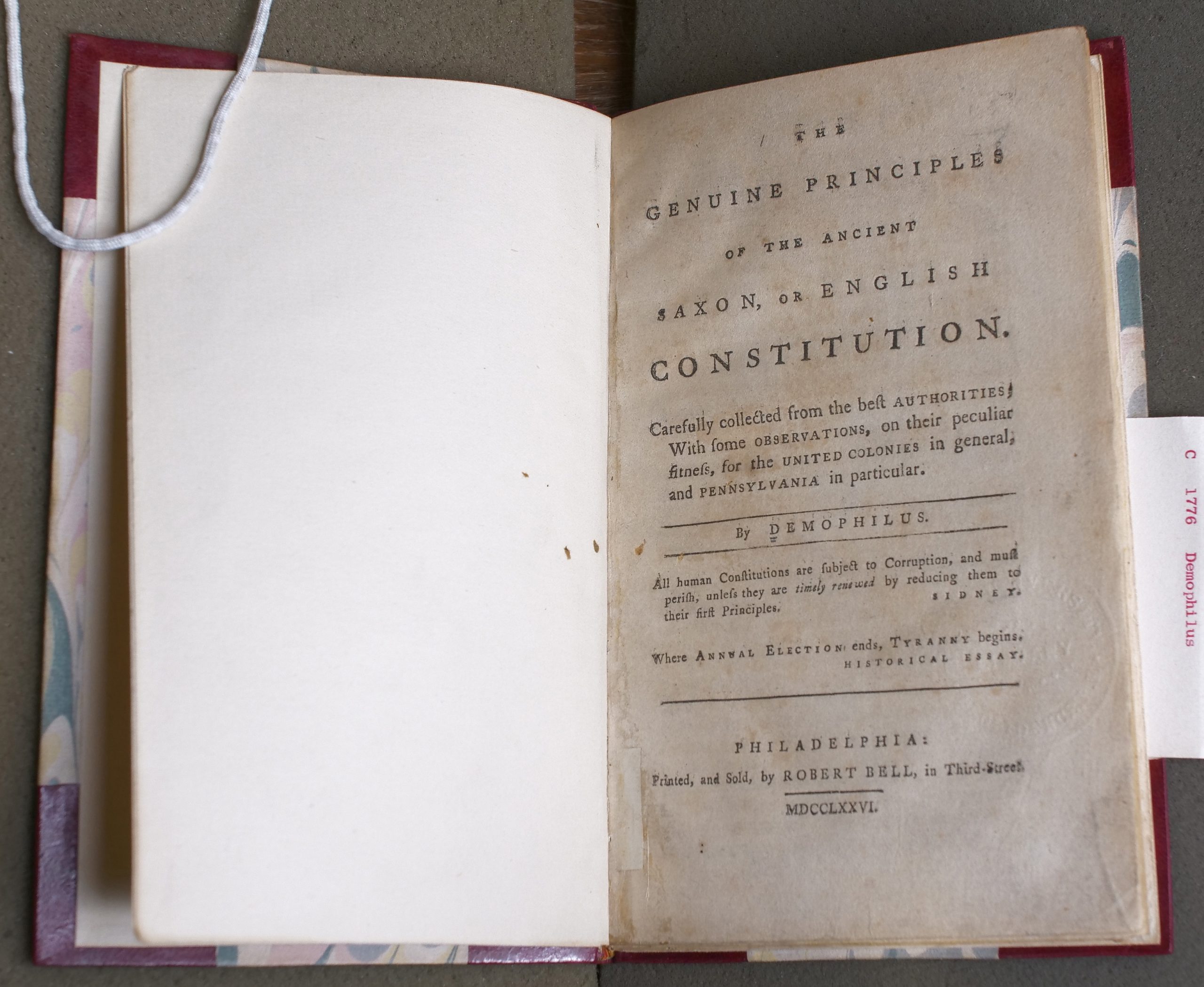 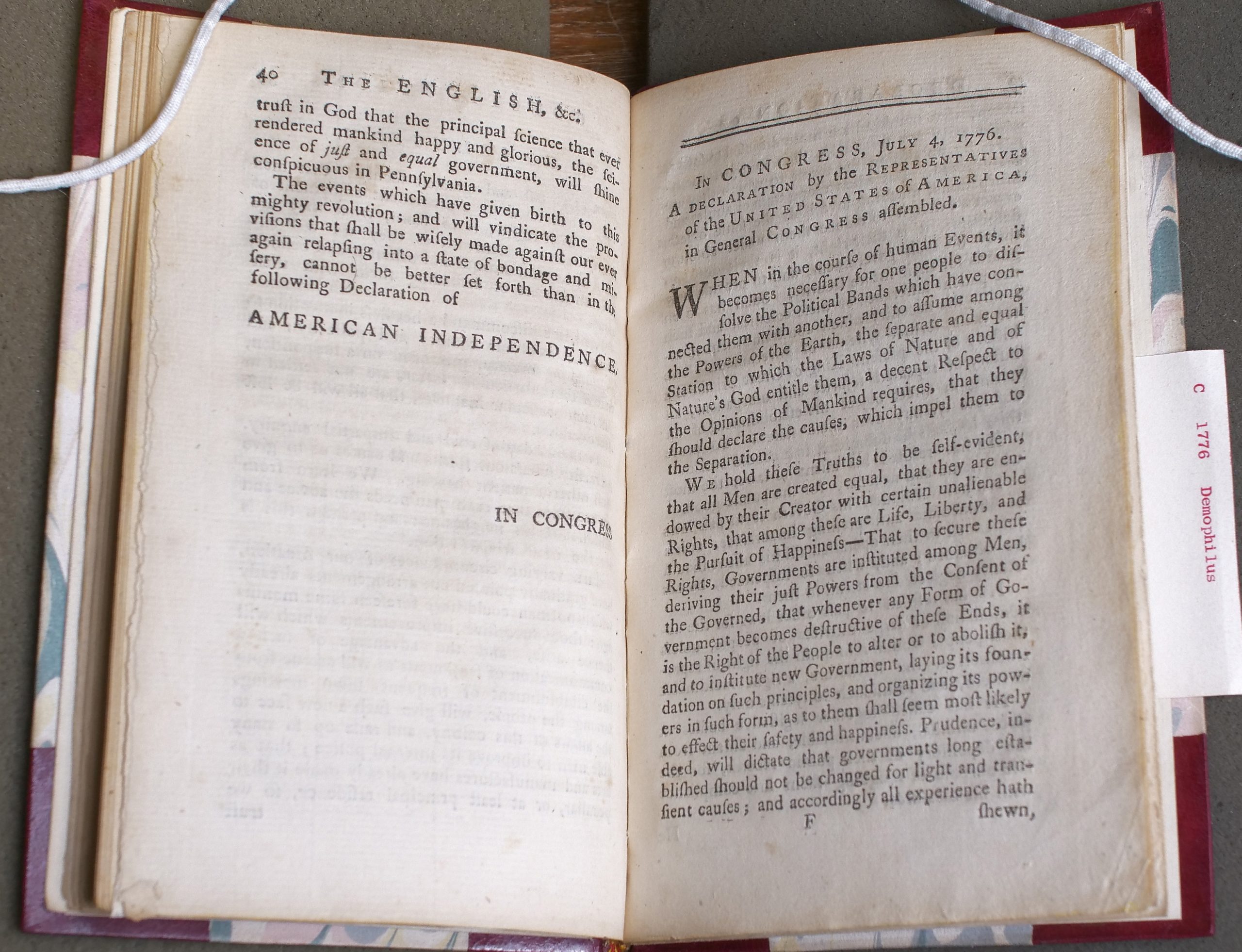 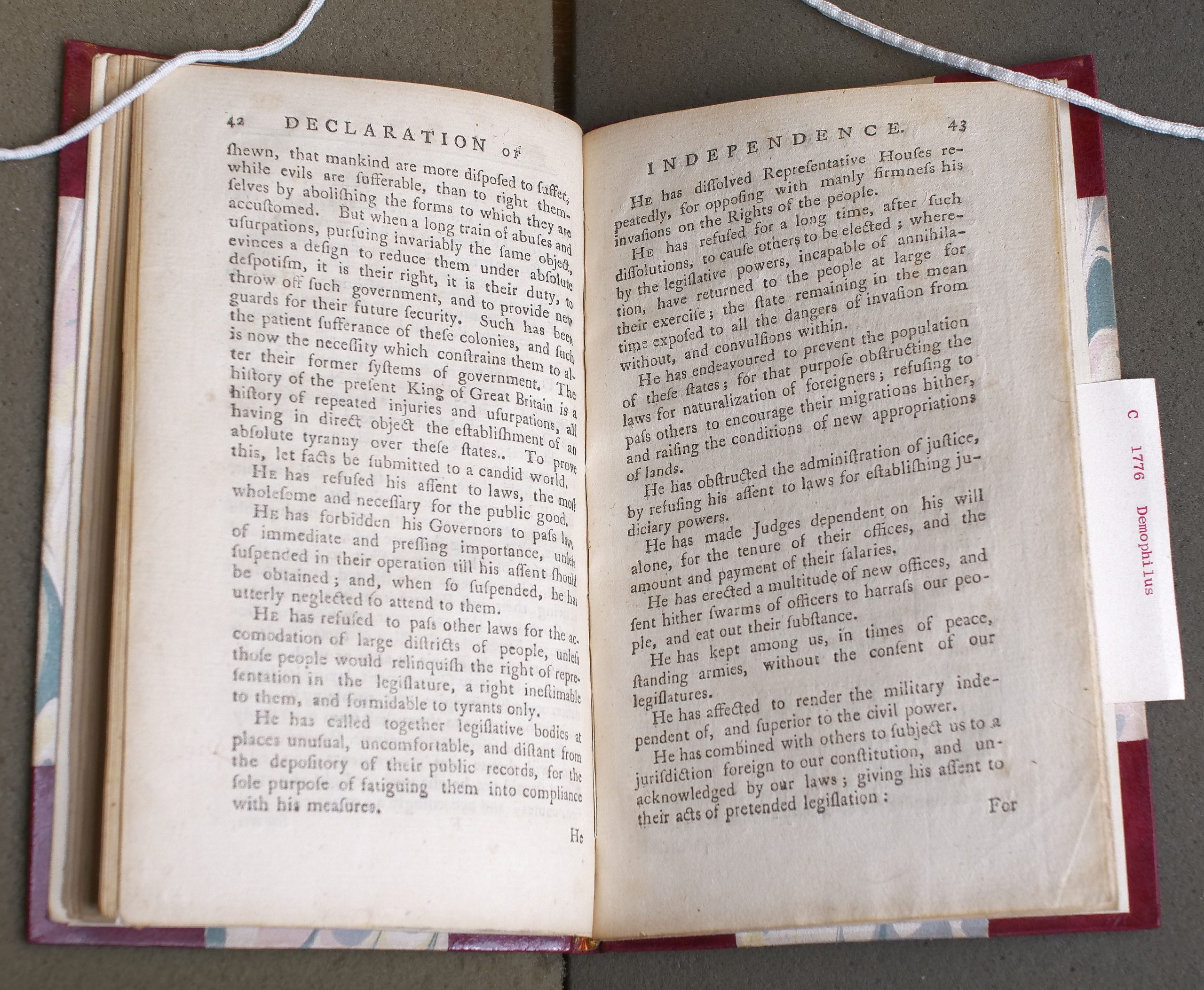 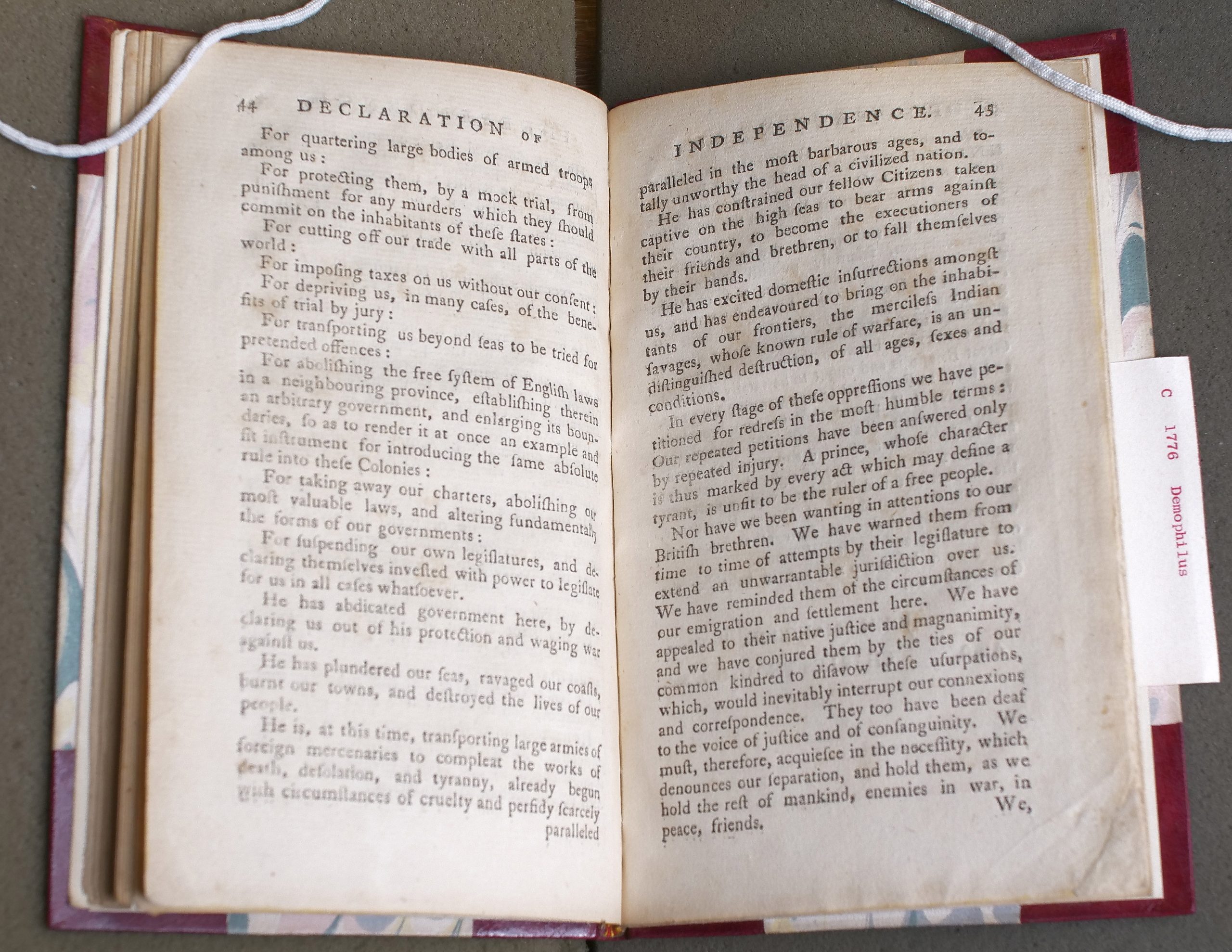 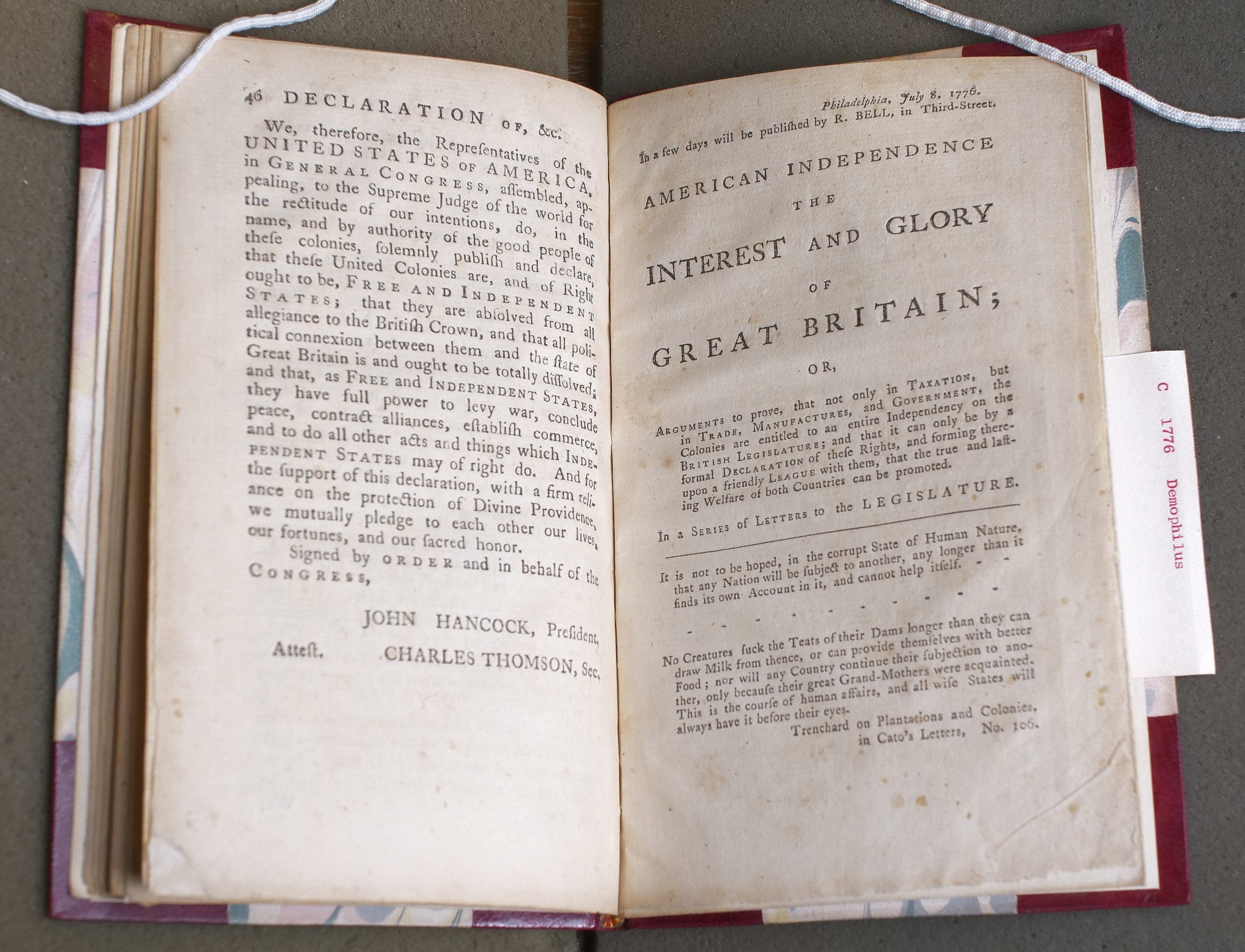 The Clements Library also holds a copy of the Declaration’s first appearance in a magazine. London was the great center of magazine publication in the 18th century, and editors there were deeply engaged in the political debates over American independence. The August 1776 issue of the General Magazine printed the full text of the Declaration for its elite audience of British readers. The cartoon opposite the issue’s first page shows the British radical politician John Wilkes, who was known for his support for American independence, cast aside in the gutter by supporters of Benjamin Hopkins, Wilkes’ opponent for the position of Chamberlain of the City of London. (Hopkins would win the 1776 election, but Wilkes would run successfully in 1779, and held the influential position until his death in 1797). Even in a campaign for a local political office, as the banners show, the question of “liberty” was at the forefront. And even a pro-government periodical like the General Magazine found the Declaration worth reprinting in full. 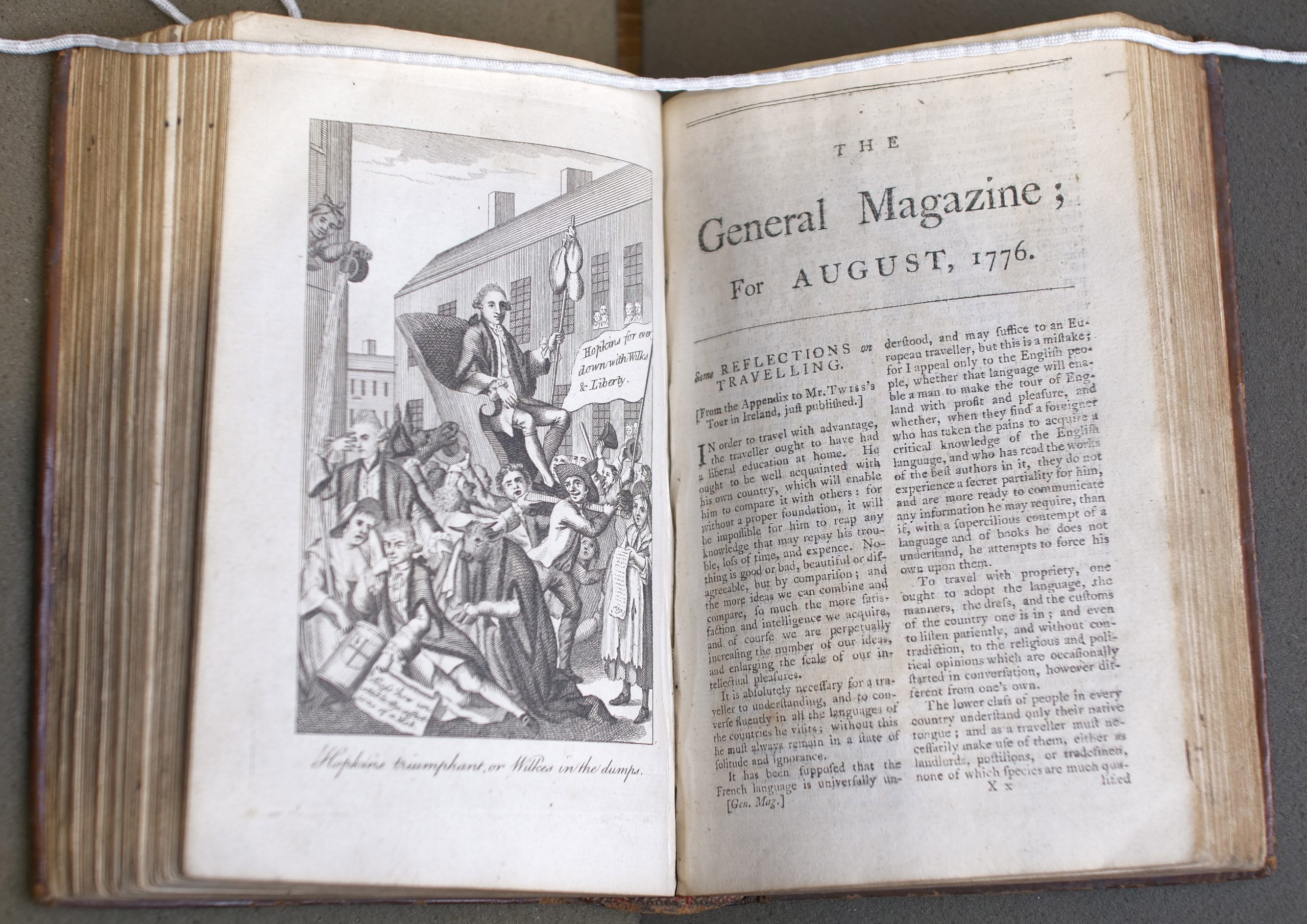 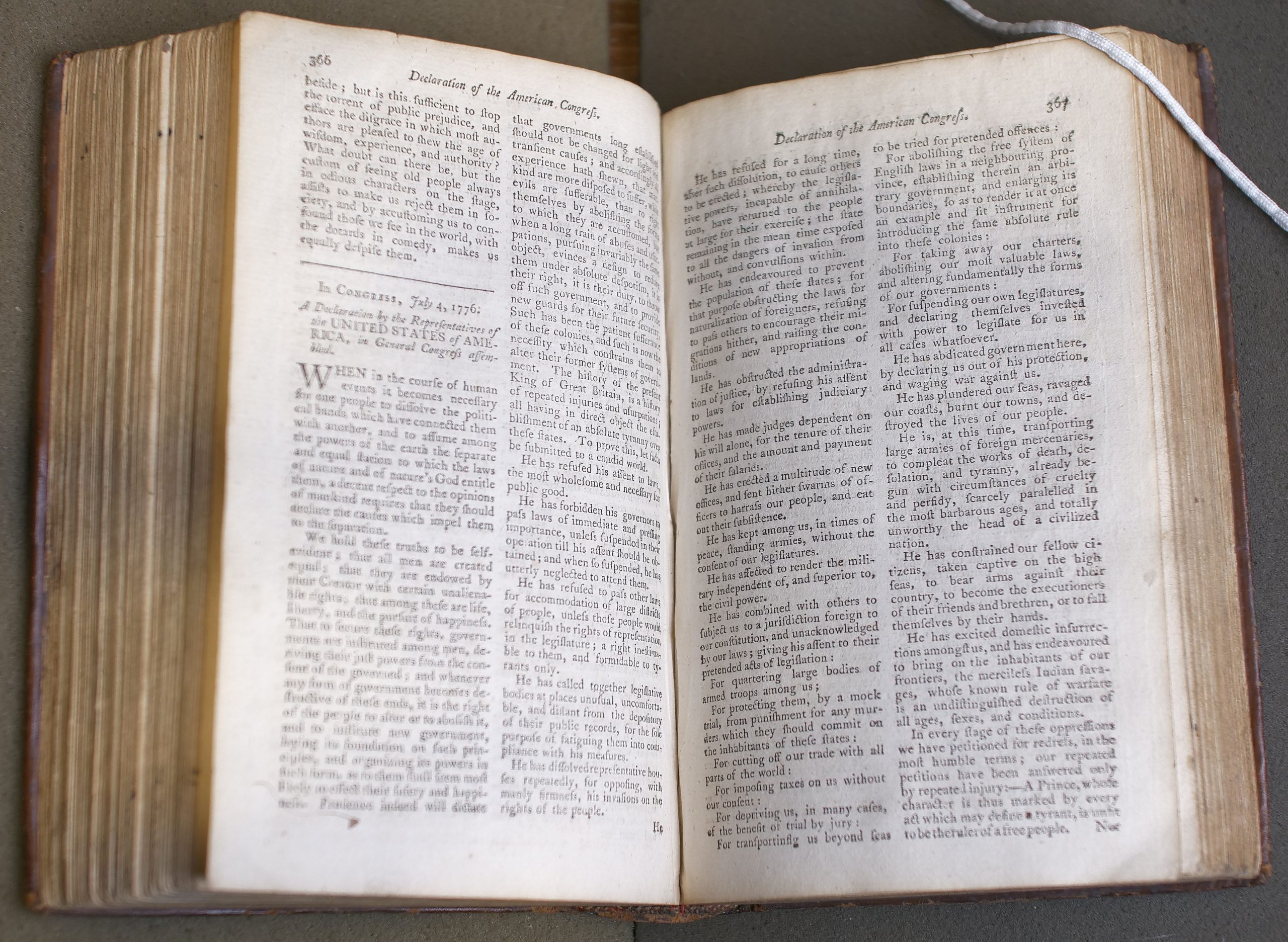 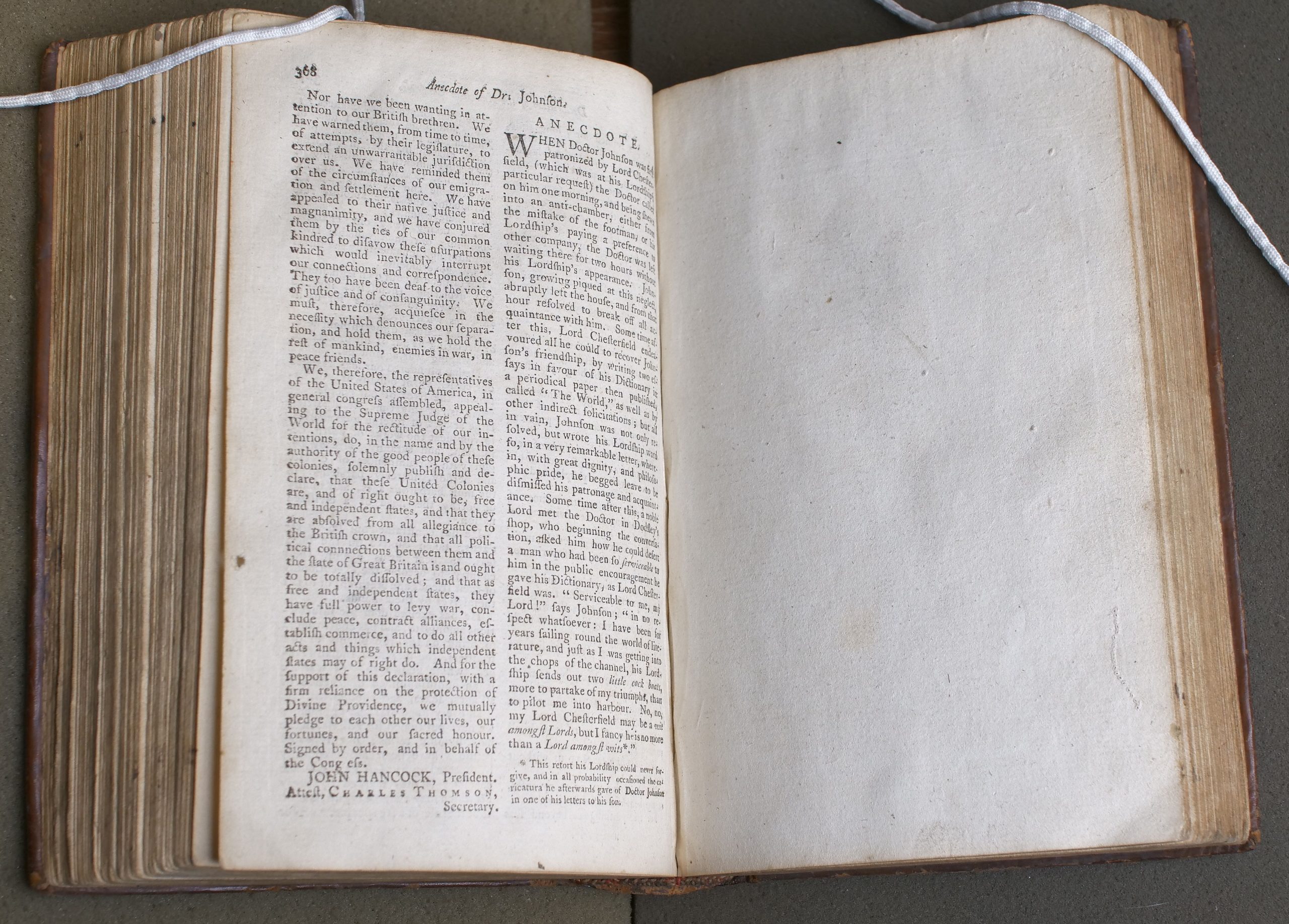 News of the Declaration reached Britain in forms other than print. The Clements Library holds the papers of Lord George Sackville Germain, who served as Secretary of State for North America in the British government during the American Revolution. Included in his papers is a manuscript copy of the full text of the Declaration of Independence, which was transcribed in America and sent to Germain in London. The manuscript is dated July 4, 1776, but was almost certainly copied later than that date. Even so, this remarkable manuscript copy makes clear that the full text of the Declaration reached the highest levels of the British government as quickly as was possible in the 1770s. Germain’s papers also include a set of remarks written by Germain on his views for why the colonists issued the Declaration when they did. 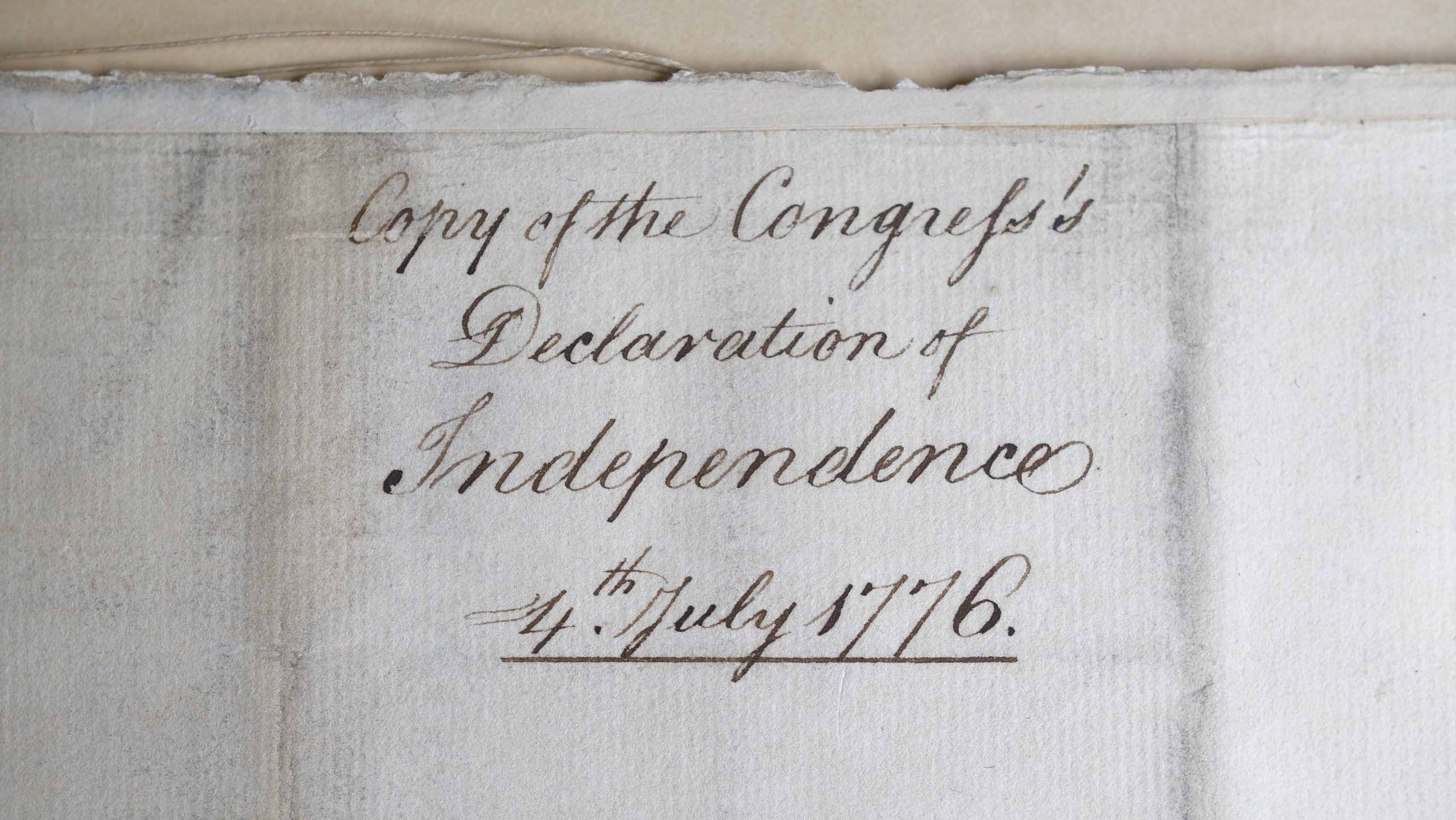 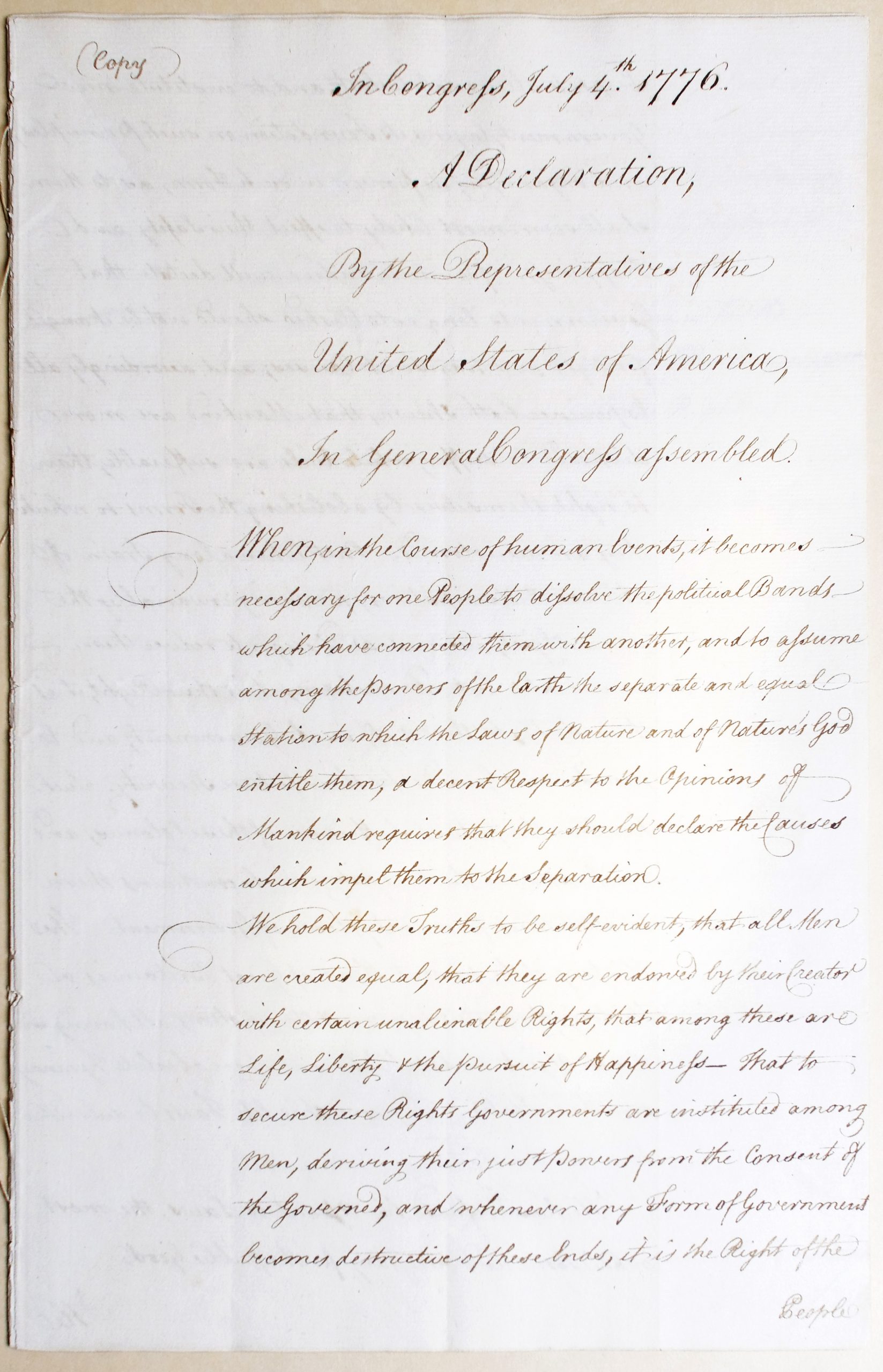 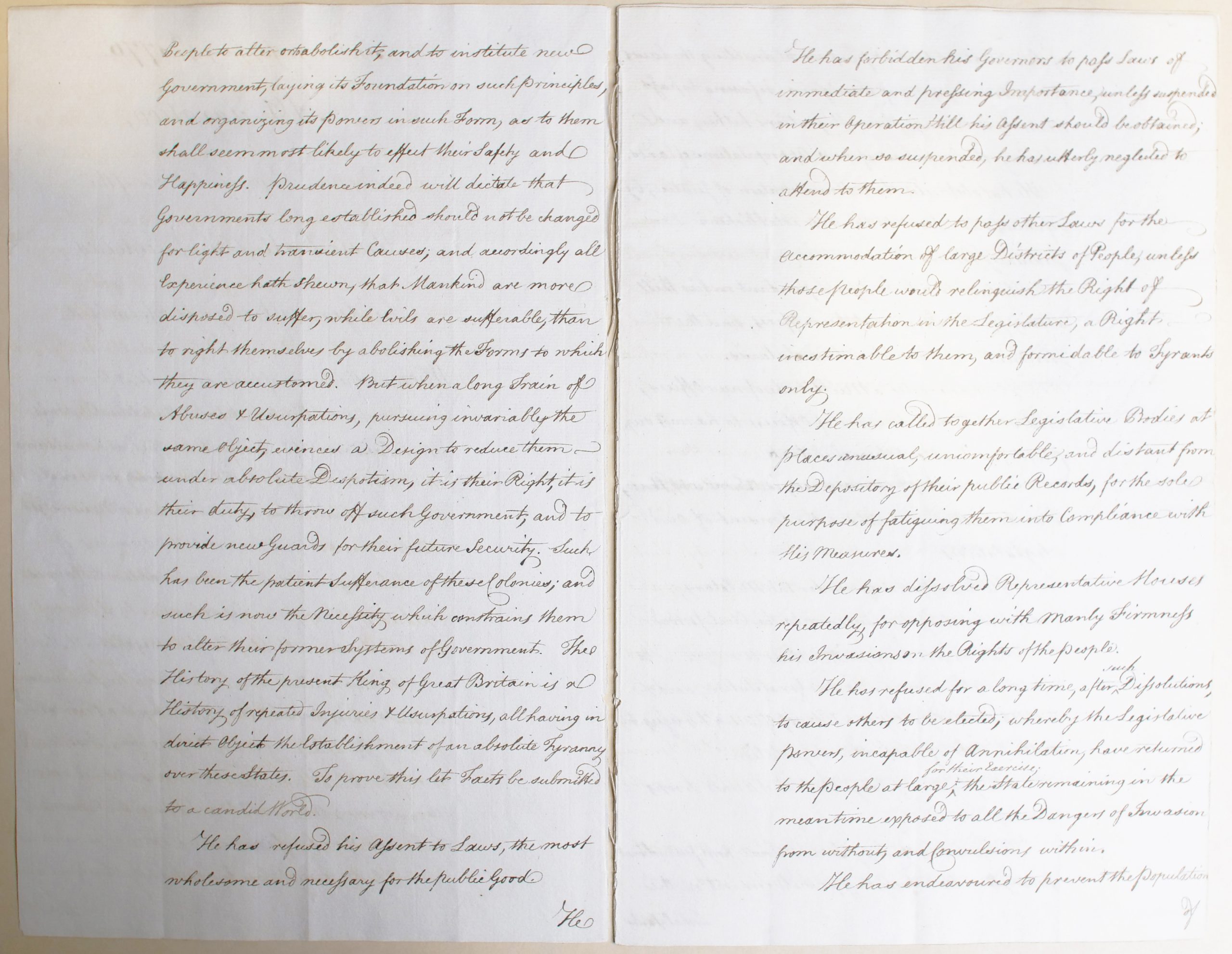 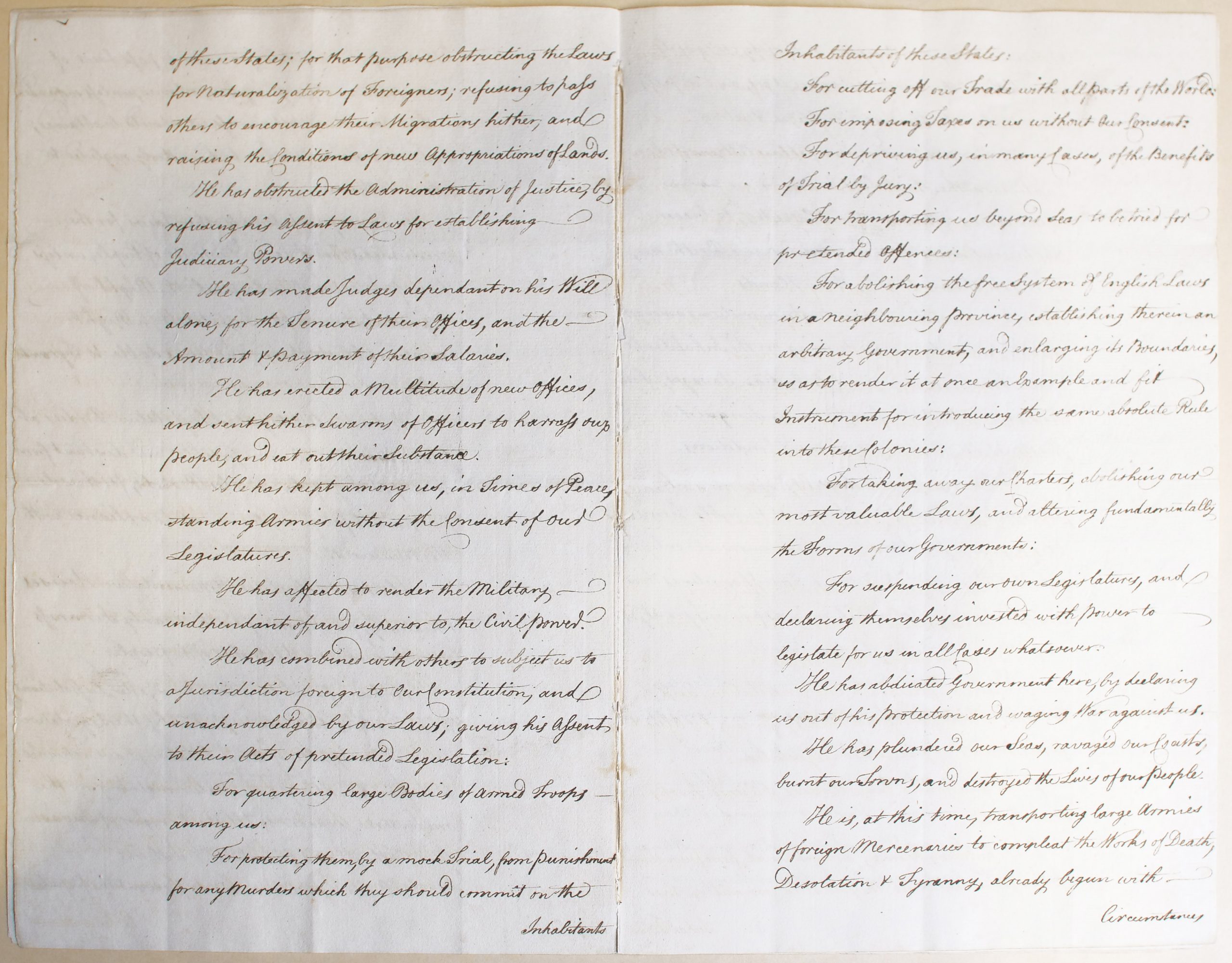 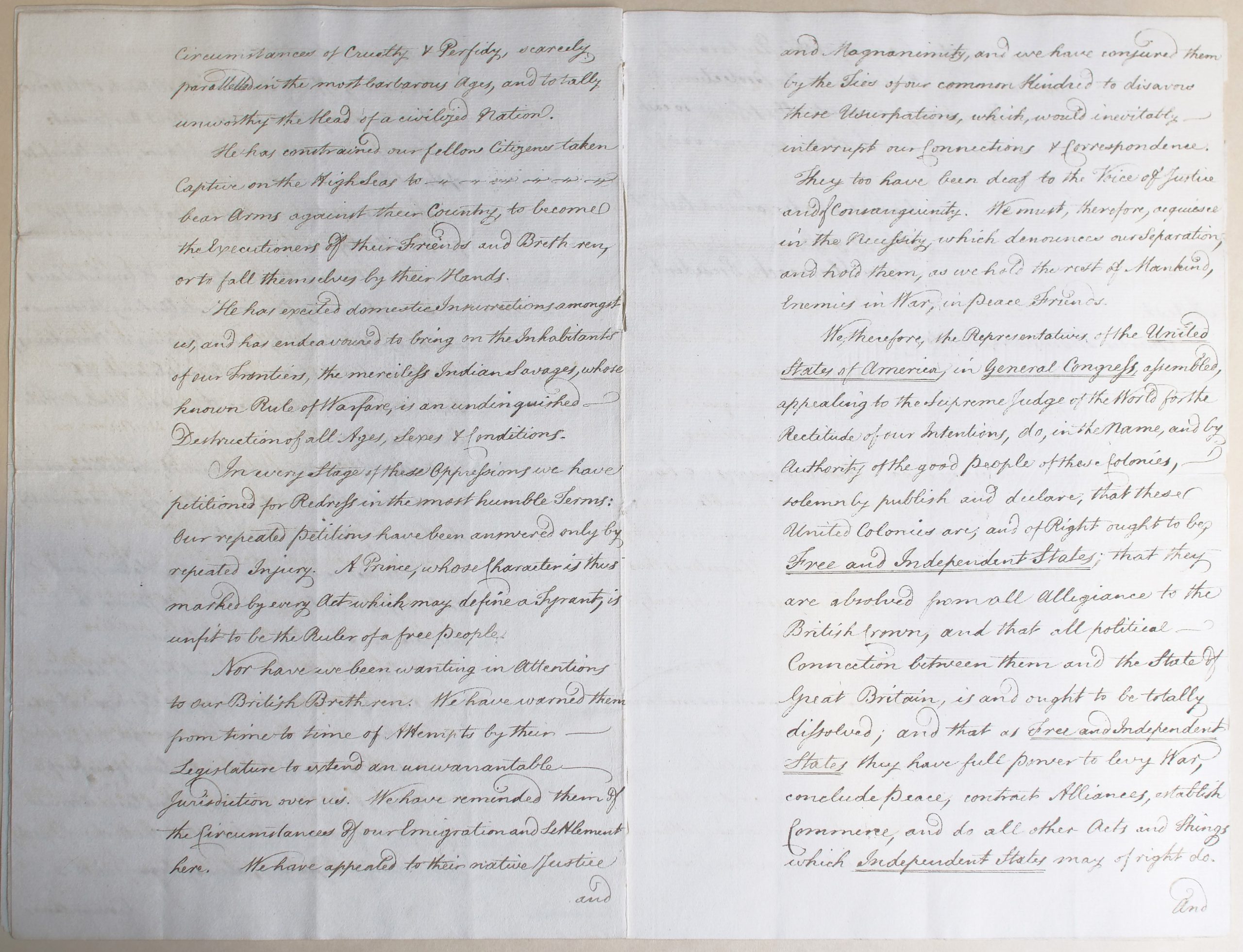 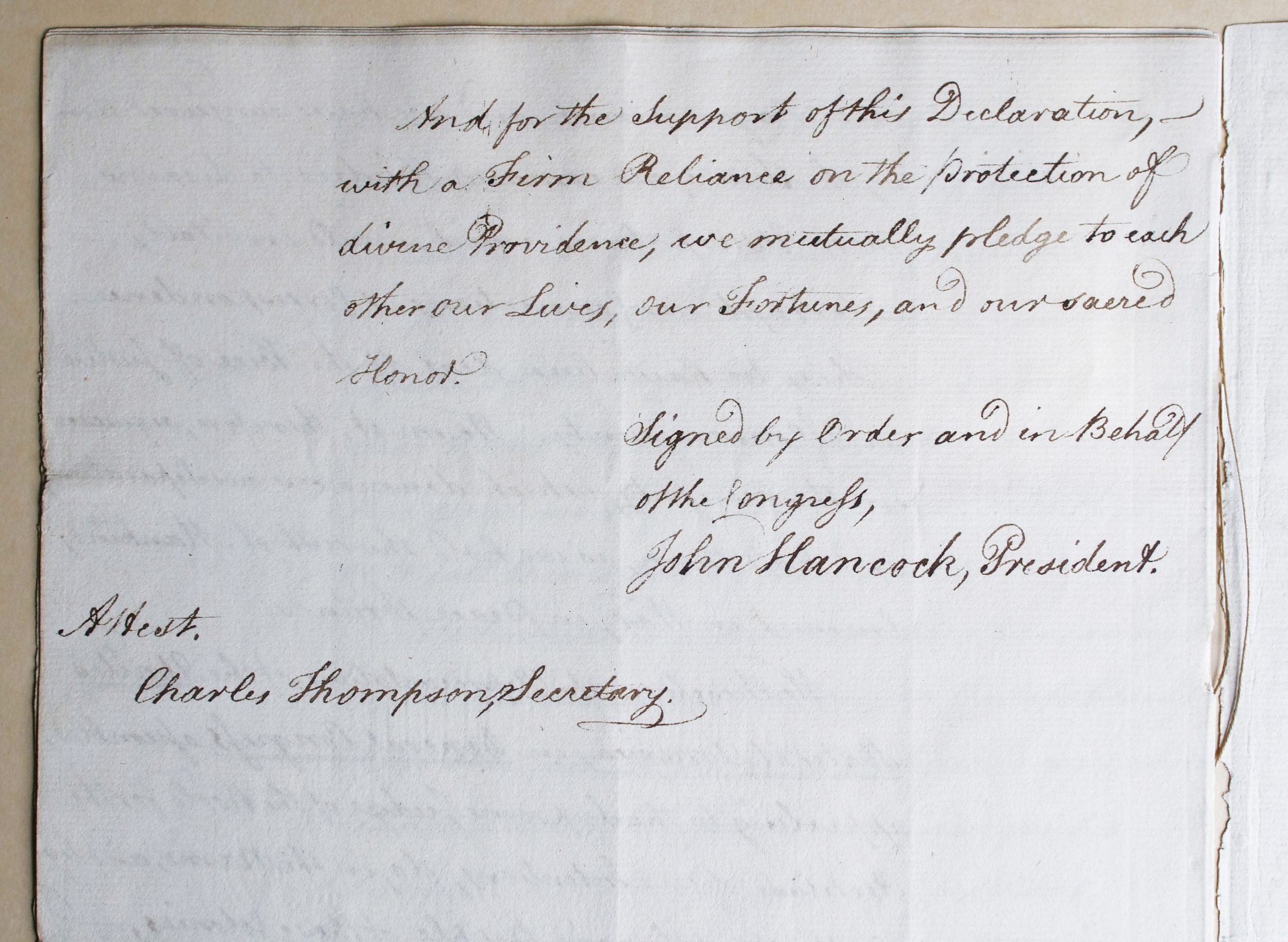 News of the Declaration spread through the colonies via the distribution of broadside copies, but more commonly by reprinting the Declaration in newspapers. The text made its way up and down the Eastern Seaboard with remarkable rapidity, appearing first (as one would expect) in newspapers in Philadelphia—in the Pennsylvania Evening Post on July 6; in Dunlap’s Pennsylvania Packet on July 8; and in the Pennsylvania Gazette on July 10 (this issue of the paper also features an ad for The Genuine Principles of the Saxon, or English Constitution, mentioned above as the first printed book to contain the text of the Declaration). By July 20, reprintings of the Declaration were appearing as far afield as Portsmouth, New Hampshire, where it ran in The Freeman’s Journal.

Yet the same pages of American newspapers that heralded the proclamation that “all men are created equal, and that they are endowed by their Creator with certain unalienable rights” were also filled with advertisements offering rewards for the return of indentured servants and enslaved people whose rights were very much alienated, as in this ad from the Pennsylvania Journal of July 10. Placed in the pages of colonial newspapers on the same footing as ads offering rewards for the return of missing livestock or lost pocket watches, these texts invite the entire community to participate in the ongoing work of enslavement that undermined the Declaration of Independences’ noblest aspirations.

As this animation from the Declaration Resources Project at Harvard University shows, the text of the Declaration reached northern New England relatively quickly, but it took much longer to reach the Southern colonies, especially South Carolina and Georgia. 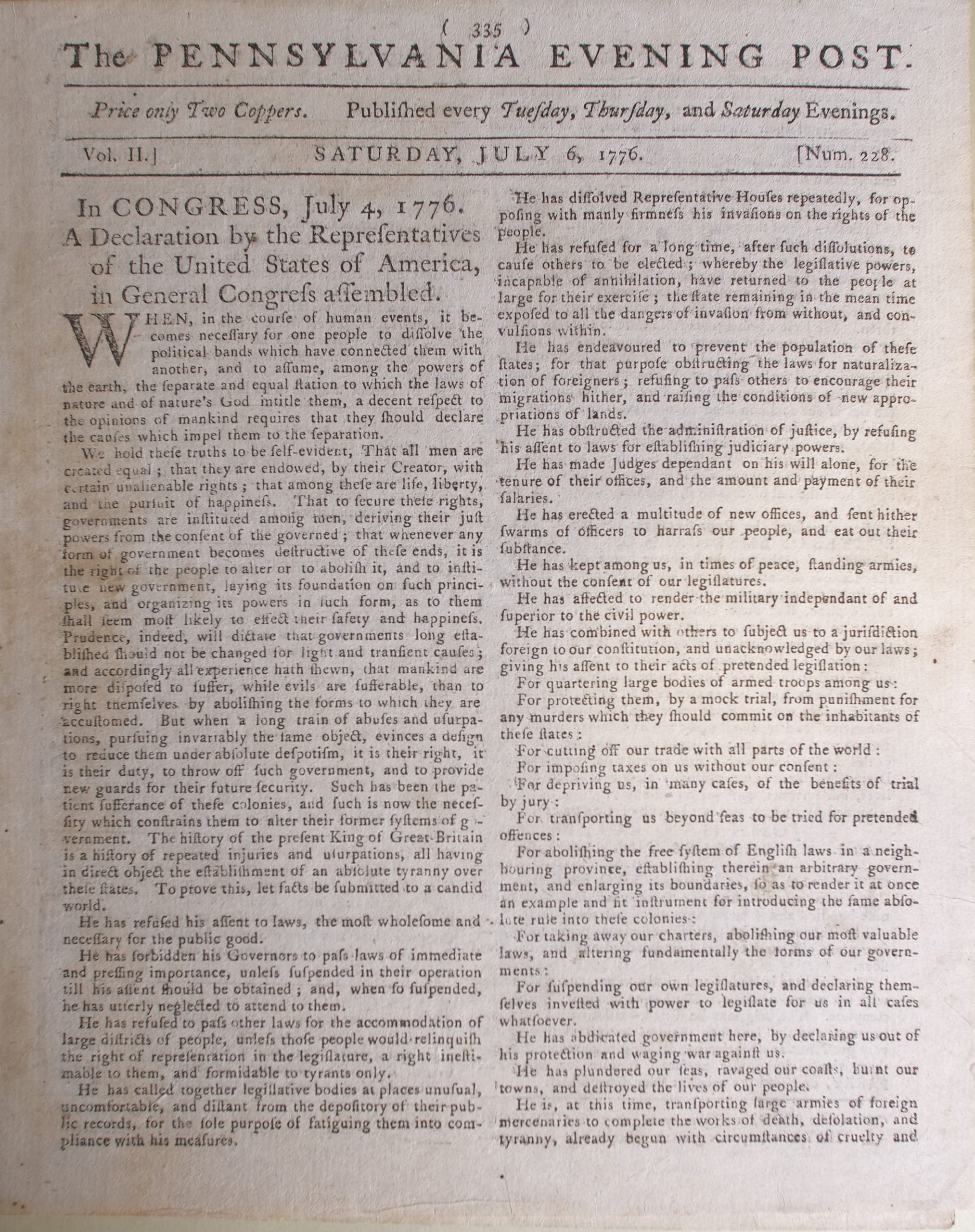 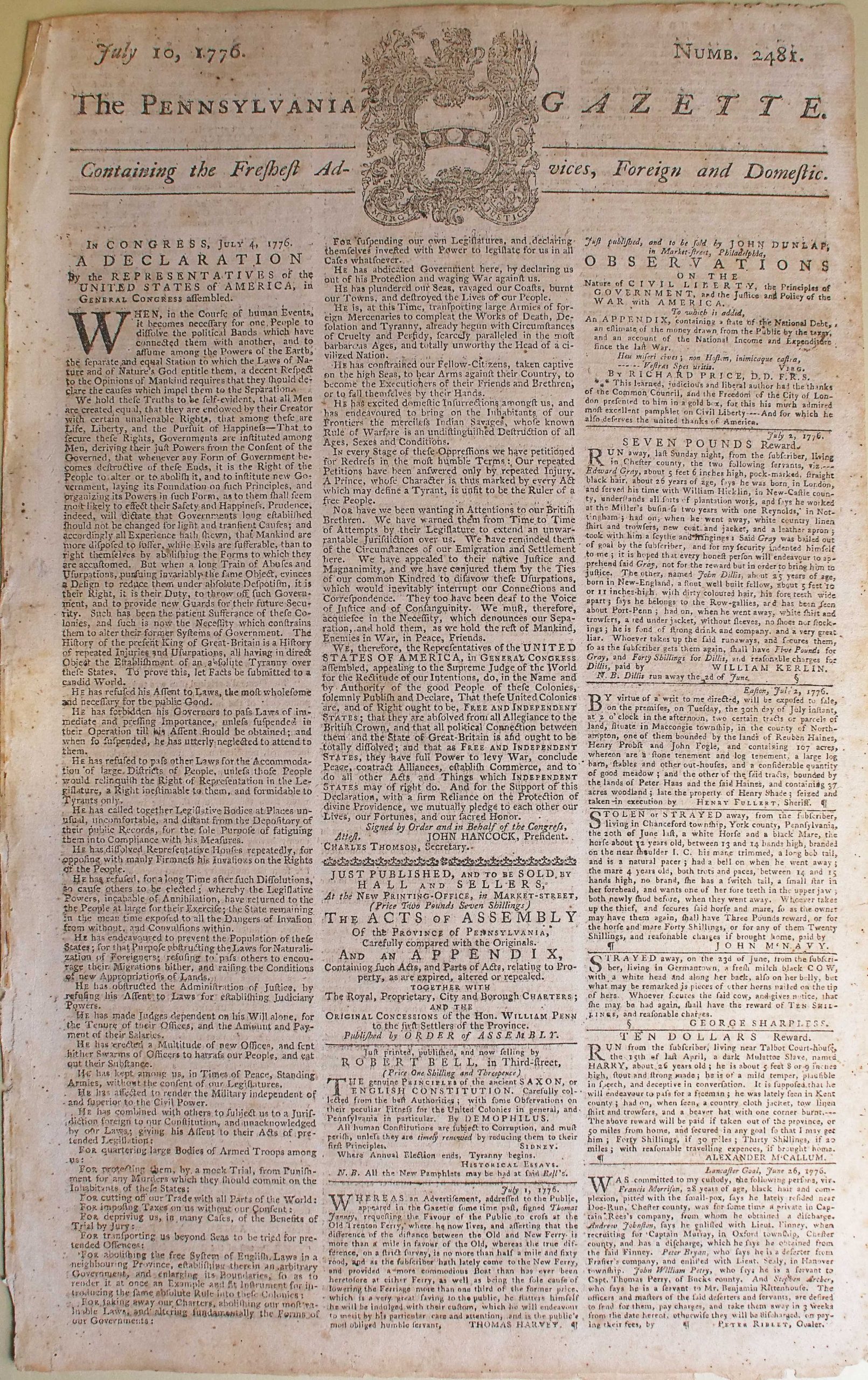 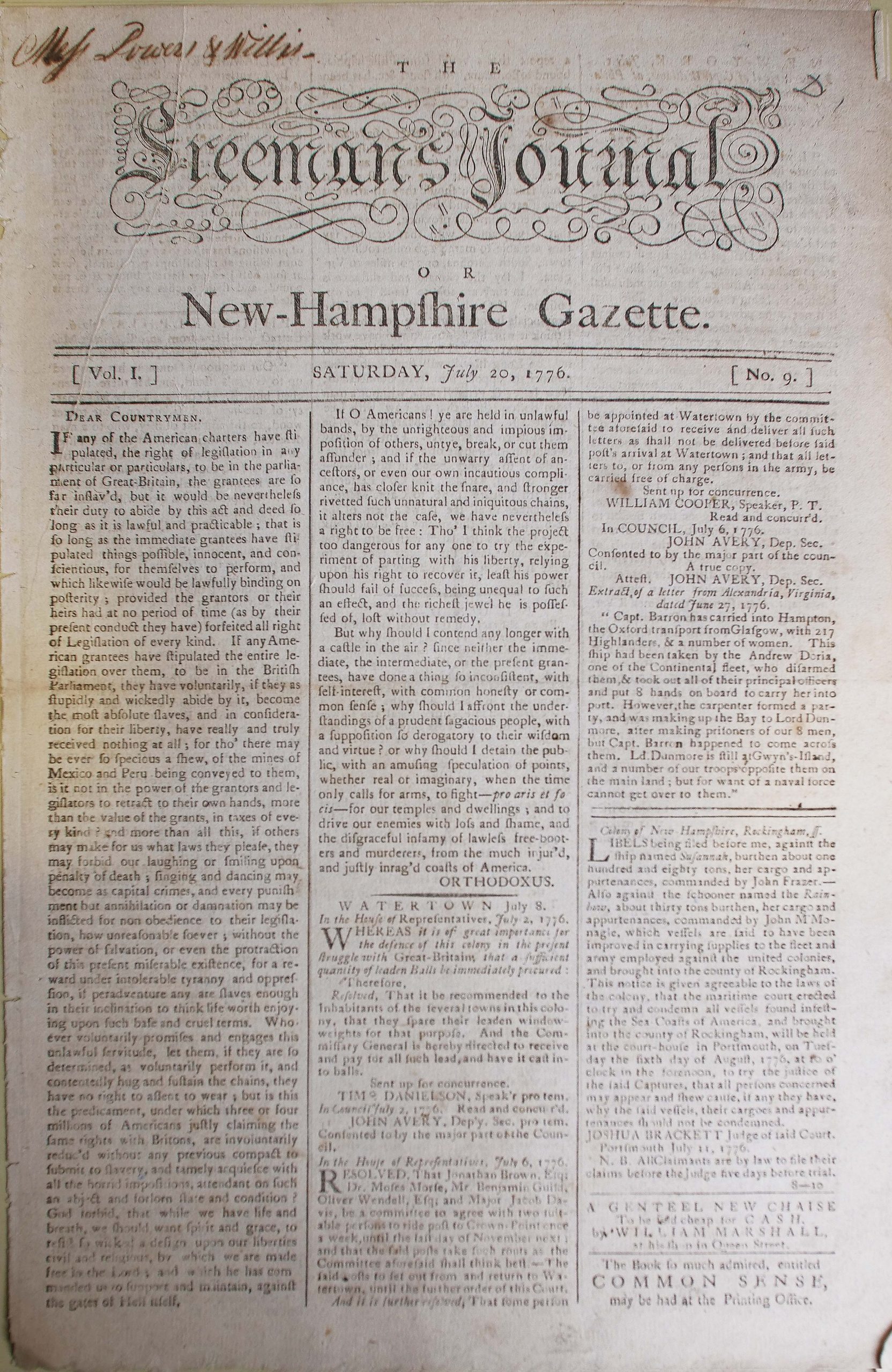 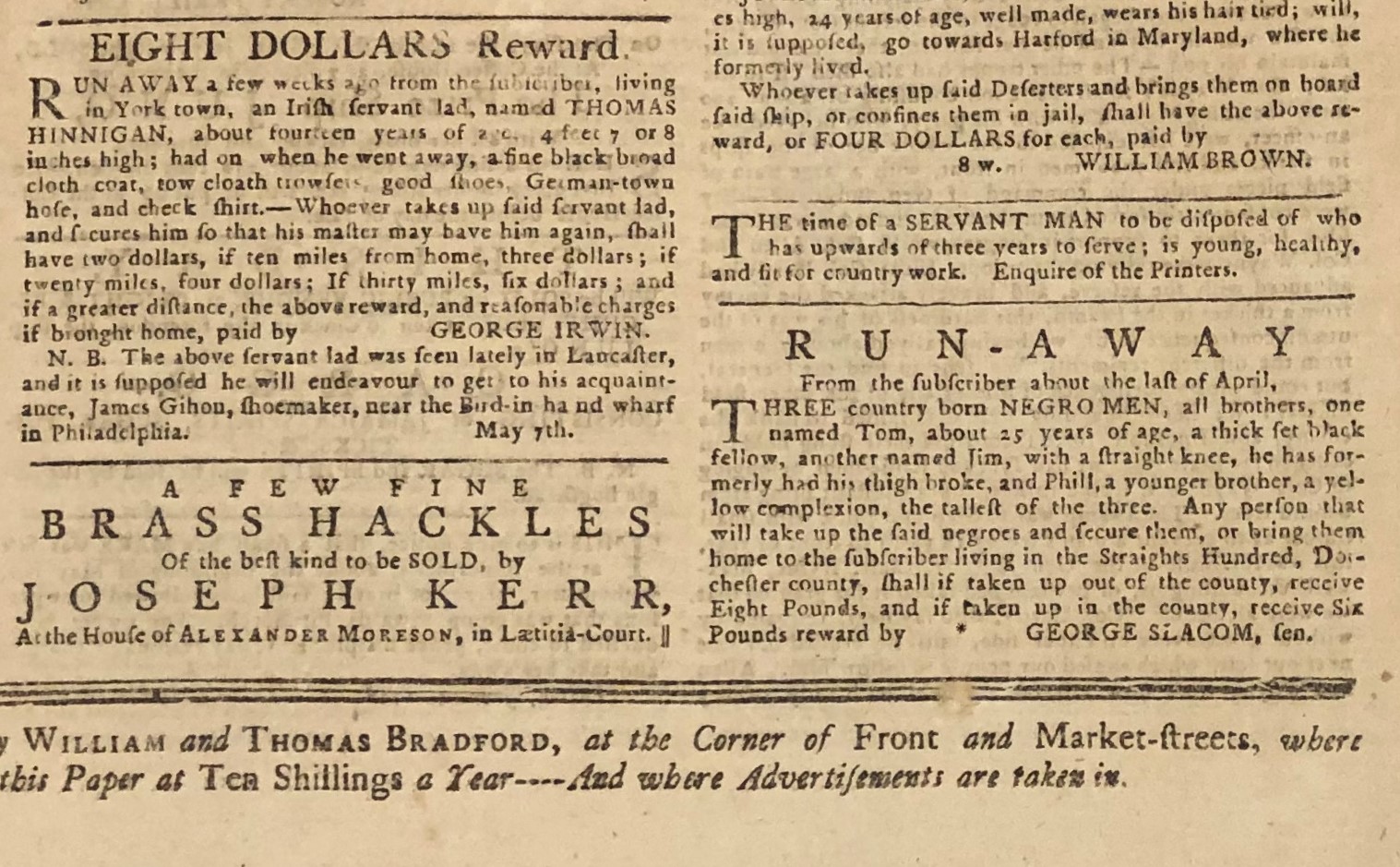 Spy Letters of the American Revolution 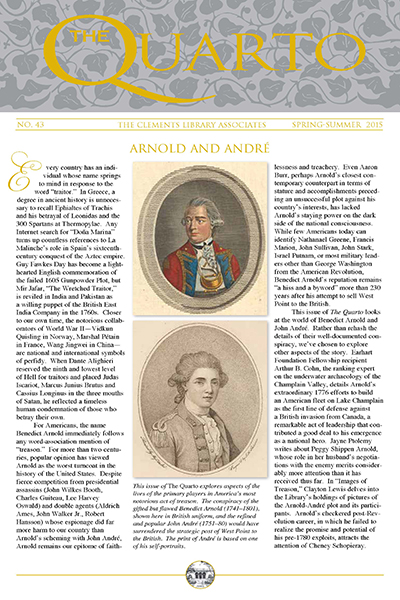 “The Last Colonial Governors in Revolutionary America” by Catherine Treesh