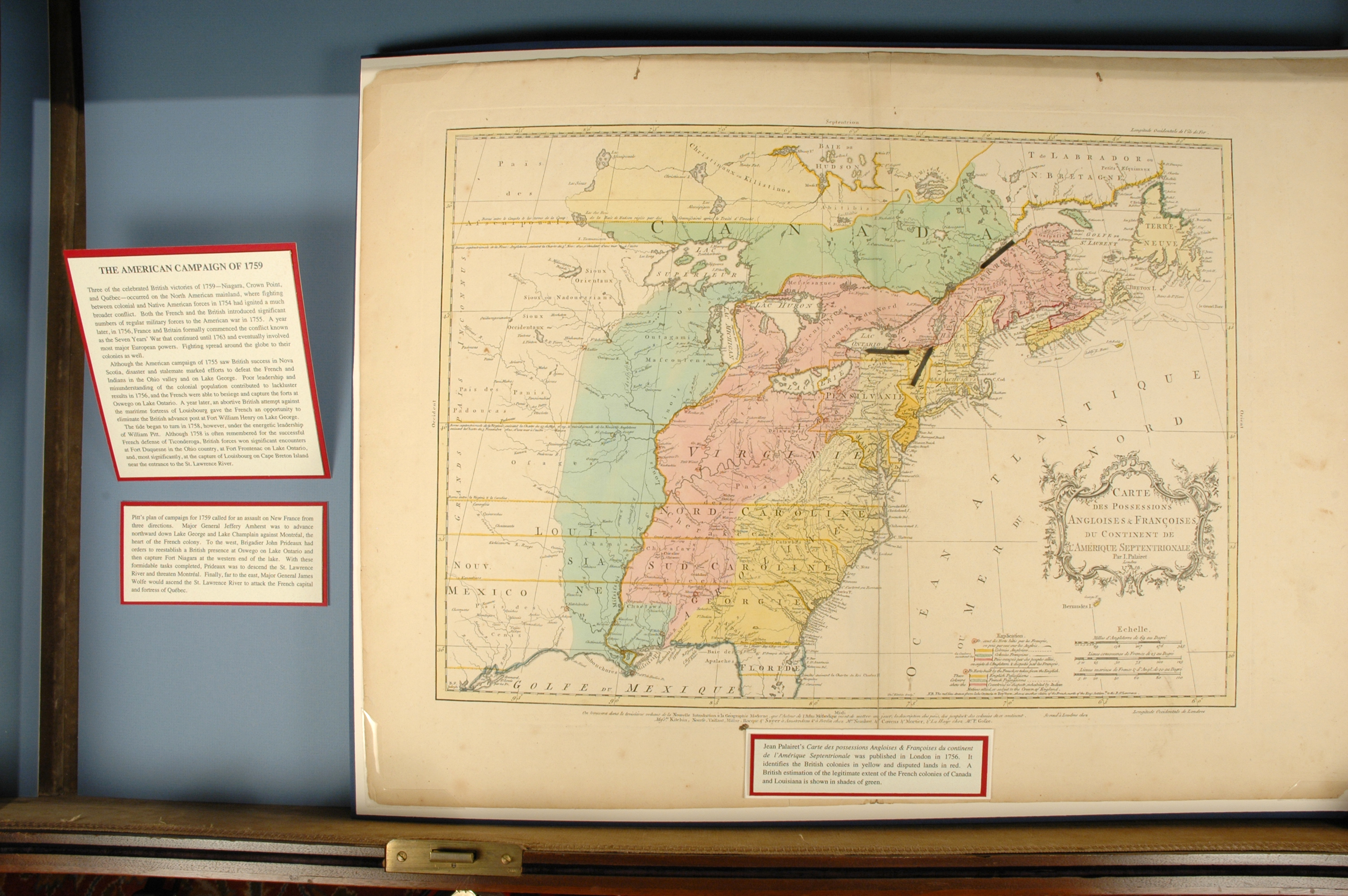 Three of the celebrated British victories of 1759—Niagara, Crown Point, and Québec—occurred on the North American mainland, where fighting between colonial and Native American forces in 1754 had ignited a much broader conflict.  Both the French and the British introduced significant numbers of regular military forces to the American war in 1755.  A year later, in 1756, France and Britain formally commenced the conflict known as the Seven Years’ War that continued until 1763 and eventually involved most major European powers.  Fighting spread around the globe to their colonies as well.

Although the American campaign of 1755 saw British success at Fort Beausejour in Nova Scotia, disaster and stalemate marked efforts to defeat the French and Indians in the Ohio Valley and on Lake George.  Poor leadership and misunderstanding of the colonial population contributed to lackluster results in 1756, and the French were able to besiege and capture the forts at Oswego on Lake Ontario.  A year later, an abortive British attempt against the maritime fortress of Louisbourg gave the French an opportunity to eliminate the British advance post of Fort William Henry on Lake George.

The tide began to turn in 1758, however, under the energetic leadership of William Pitt.  Although 1758 is often remembered for the successful French defense of Ticonderoga, British forces won significant encounters at Fort Duquesne in the Ohio country, at Fort Frontenac on Lake Ontario, and, most significantly, at Louisbourg on Cape Breton Island near the entrance to the St. Lawrence River.

Pitt’s plan of campaign for 1759 projected an assault on New France from three directions.  Major General Jeffery Amherst was to advance northward down Lake George and Lake Champlain against Montréal, the heart of the French colony.  To the west, Brigadier John Prideaux had orders to reestablish a British presence at Oswego on Lake Ontario and then capture Fort Niagara at the western end of the lake.  With these formidable tasks completed, Prideaux was to descend the St. Lawrence River and threaten Montréal.  Finally, far to the northeast, Major General James Wolfe would ascend the St. Lawrence River to attack the French capital and fortress of Québec. 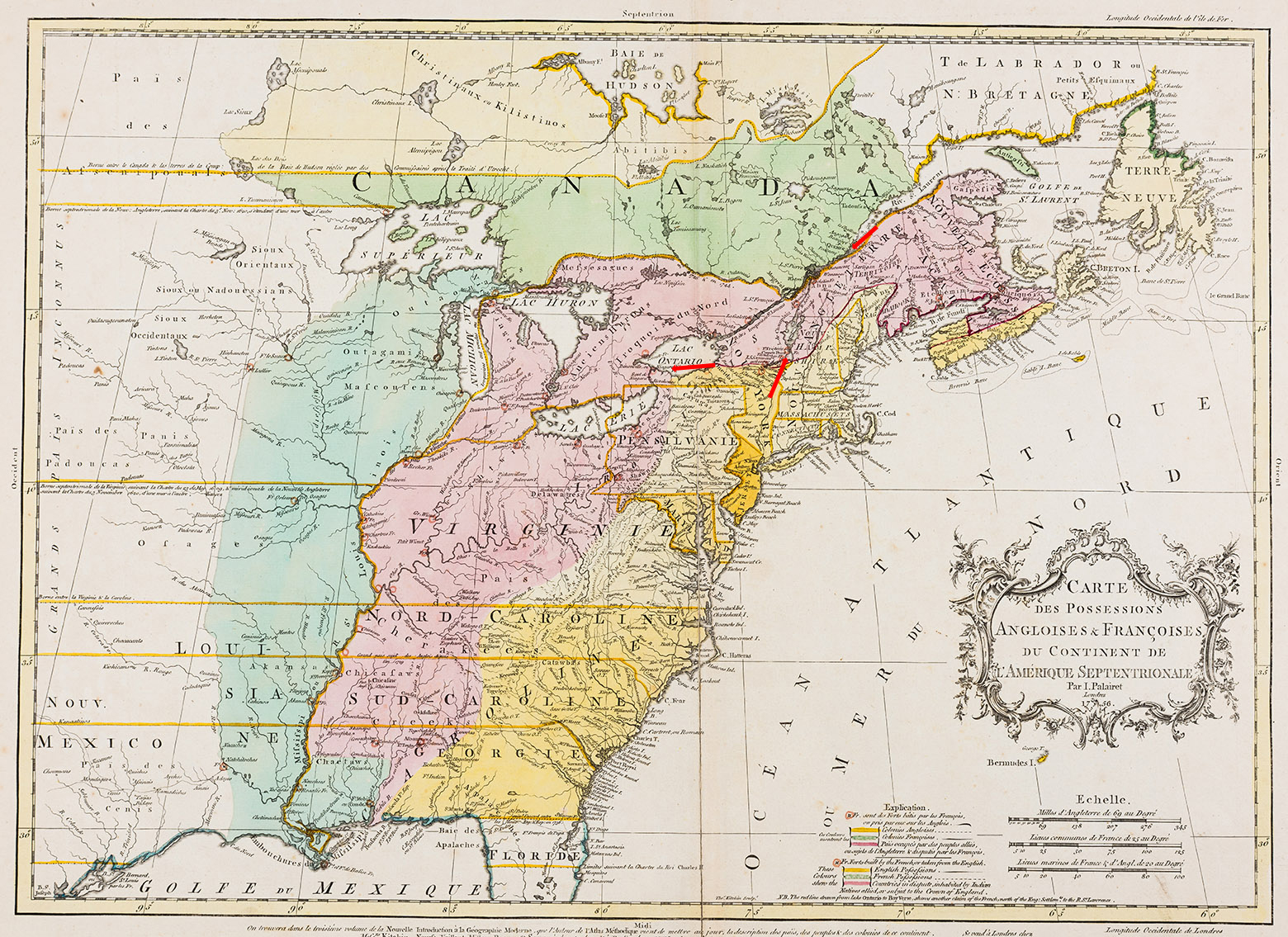 Palairet’s map of eastern North America identifies the British colonies in yellow and disputed lands in red.  A British estimation of the legitimate extent of the French colonies of Canada and Louisiana is shown in shades of green and blue.  Arrows identify the directions of advance for Prideaux’s, Amherst’s, and Wolfe’s expeditions.

Mary Ann Rocque, A Plan of Schenectady in A Set of Plans and Forts in America. Reduced from Actual Surveys. London, 1763. Map Division, Atl2 1763 Ro.

Prideaux’s Lake Ontario force assembled at Schenectady on the Mohawk River and headed west toward Oswego, while Amherst’s much larger army moved north from nearby Albany on the upper Hudson.  Both armies traveled in whaleboats and wooden bateaux, sturdy vessels that could be portaged around rapids and other obstacles in the rivers. 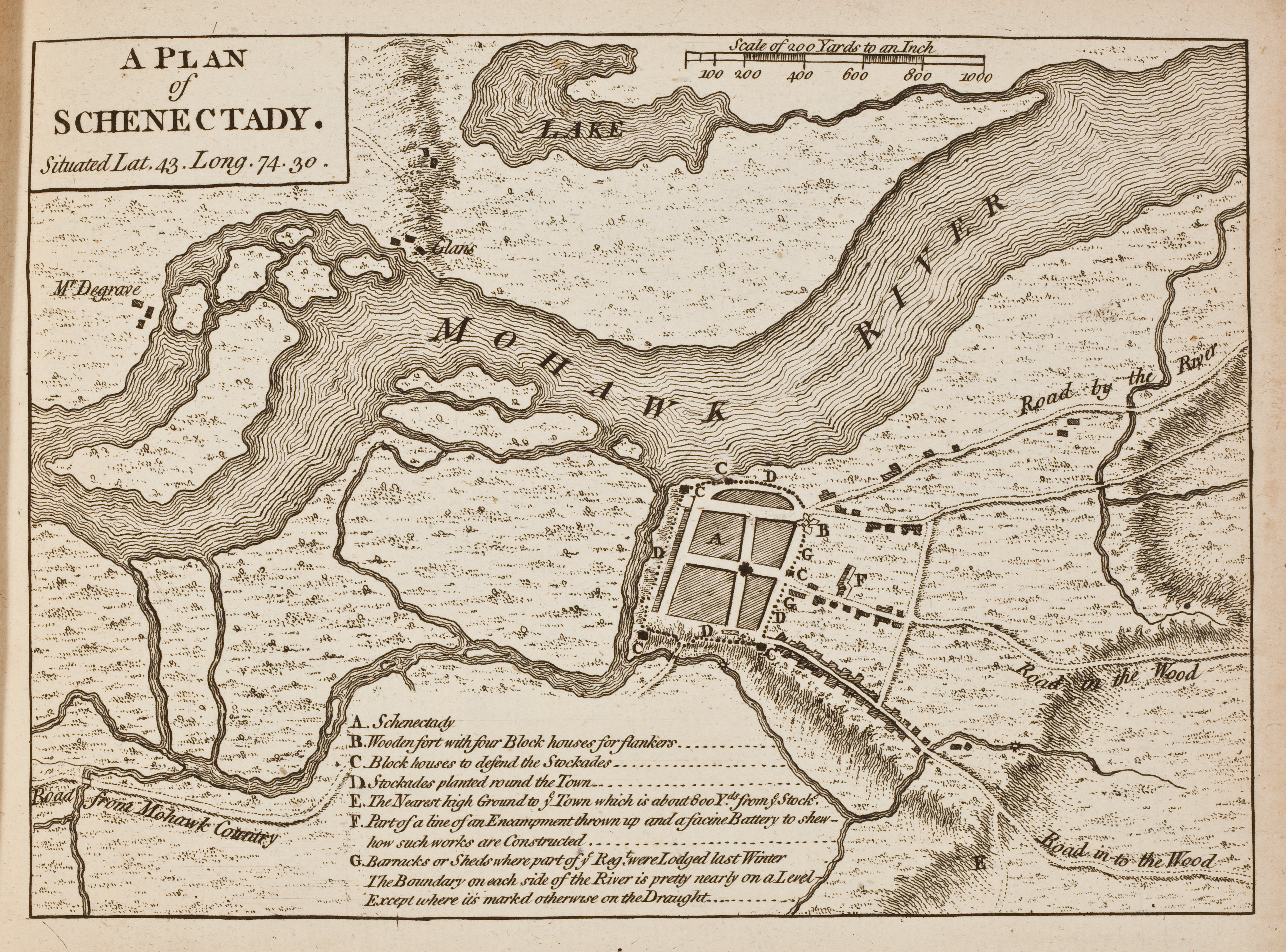 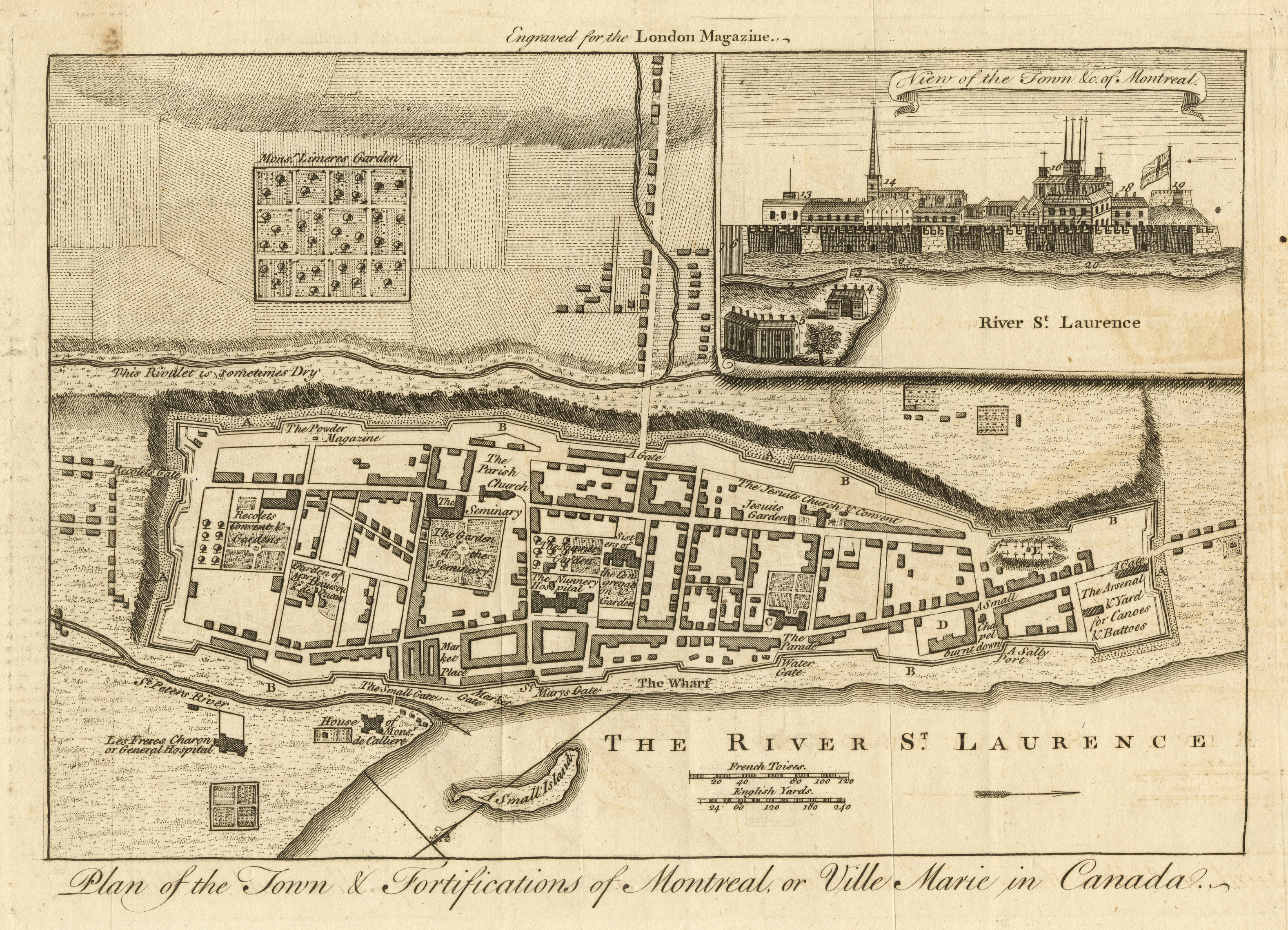 Plan of the Town and Fortifications of Montreal or Ville Marie in Canada. Engraved for the London Magazine. London, [1760]. Map Division, Small Maps 1760.

Montréal, second largest town of French Canada was the ultimate goal of both Amherst’s and Prideaux’s armies, although weather and enemy resistance could delay their advance.  Montréal was very weakly fortified, so its successful defense meant keeping the enemy at a distance.

Mary Ann Rocque, A Plan of the New Fort at Pittsburgh or Du Quesne Novr. 1759 in A Set of Plans and Forts in America. Reduced from Actual Surveys. London, 1763. Map Division, Atl2 1763 Ro.

The British actually fielded a fourth army for the 1759 American campaign.  Brigadier John Stanwix (ca. 1690-1766) was to move north from the Forks of the Ohio to Lake Erie in support of Prideaux’s assault on Fort Niagara.  By the spring of 1759 Stanwix’s command was beginning to construct an enormous fort of earth and brick to replace tiny Fort Duquesne, which the French had abandoned late in 1758.  Stanwix never got his expedition underway, although the existence of his force tied down French troops who might otherwise have aided Niagara. 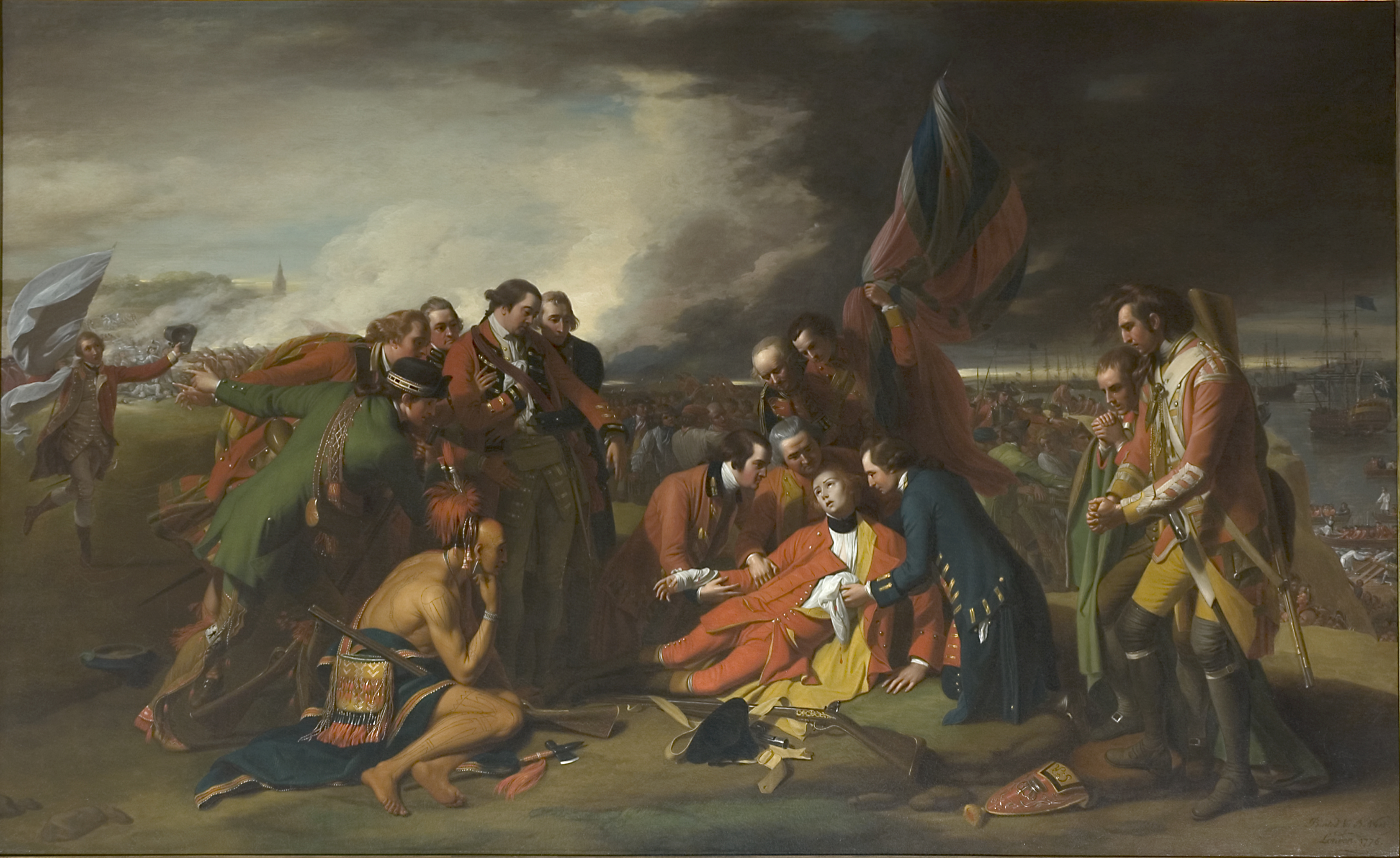 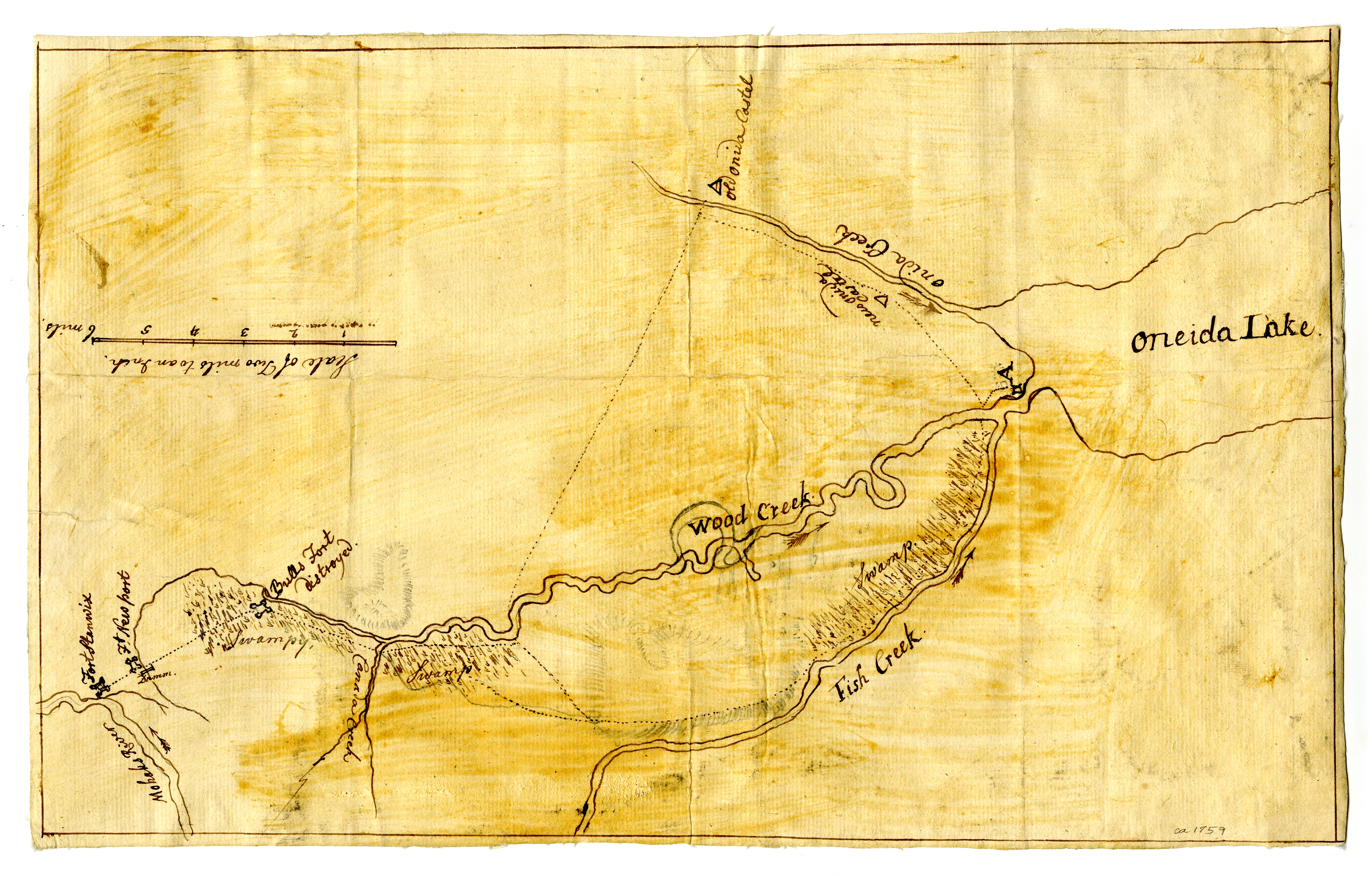