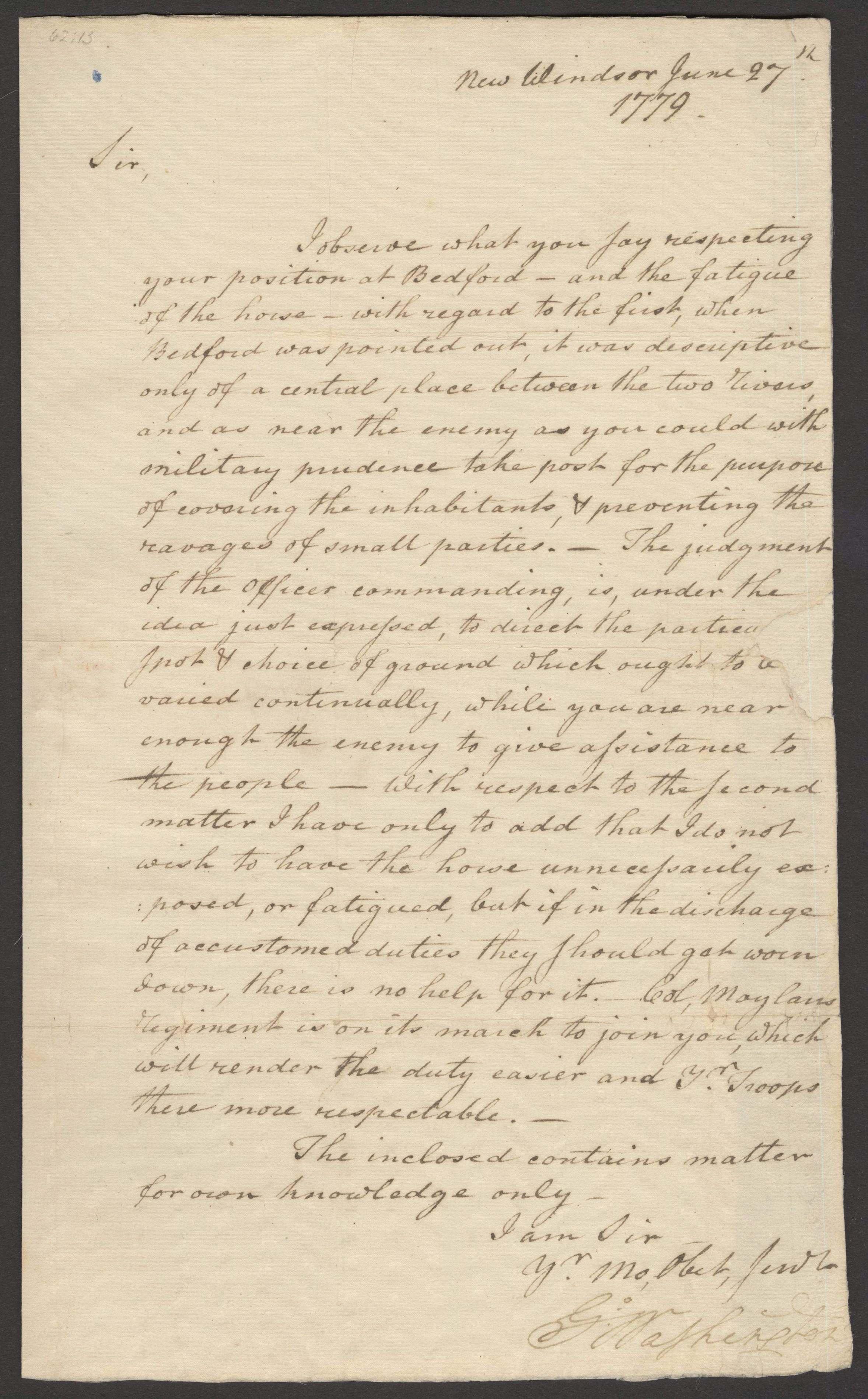 Sir, / I observe what you say respecting /your position at Bedford–and the fatigue / of the horse–with regard to the first, when / Bedford was pointed out, it was descriptive / only of a central place between the two Rivers / and as near the enemy as you could with / military prudence take post for the purpose / of covering the inhabitants, and preventing the / ravages of small parties. The judgment / of the officer commanding, is, under the / idea just expressed, to direct the particu[lar] / Spot and choice of ground which ought to be / varied continually, while you re near / enough to the enemy to give assistance to / the people.–With respect to the second / matter I have only to add that I do not / wish to have the horse unnecessarily ex: / posed, or fatigued, but if in the discharge / of accustomed duties they should get worn /down, there is no help for it.-Col. Moylans / Regiment is on its march to join you, which / will render the duty easier and Yr. Troops / there more respectable.– / The inclosed contains matter for our knowledge only.- / I am Sir- / Your Mo. Obedt. Sevt. / Go: Washington

Sir, / Your letter of yesterday came safe / to my hand, and by the Dragoon who was the / bearer of it I send you Ten guineas for C—r. — / His successor (whose name I have no desire to be / informed of provided his intelligence is good, & / seasonably transmitted) should endeavor to / his upon some certain mode of conveying his / information quickly, for it is of little avail / to be told of things after they have become / matter of public notoriety, and known to every / body. — This new agent should communicate / his signature and the private marks by which ge- / nuine papers are to be distinguished from / counterfeits. — There is a man on York / Island living on or near the North River, of the / name of George Higday who I am told hath / given signal proofs of his attachment to us, & / at the same time stands well with the enemy. — / If upon inquiry this is found to be the case / (and much caution should be used in investi- / gating the matter, as well as on his own account / as on that of Higday) he will be a fit instrument / to convey intelligence to me while I am on the / west side of the North River, as he is enterprising / and connected with people in Bergen County / who will assist in forming a chain to me, in / any manner they shall agree on. — / I do not know who H–employs, 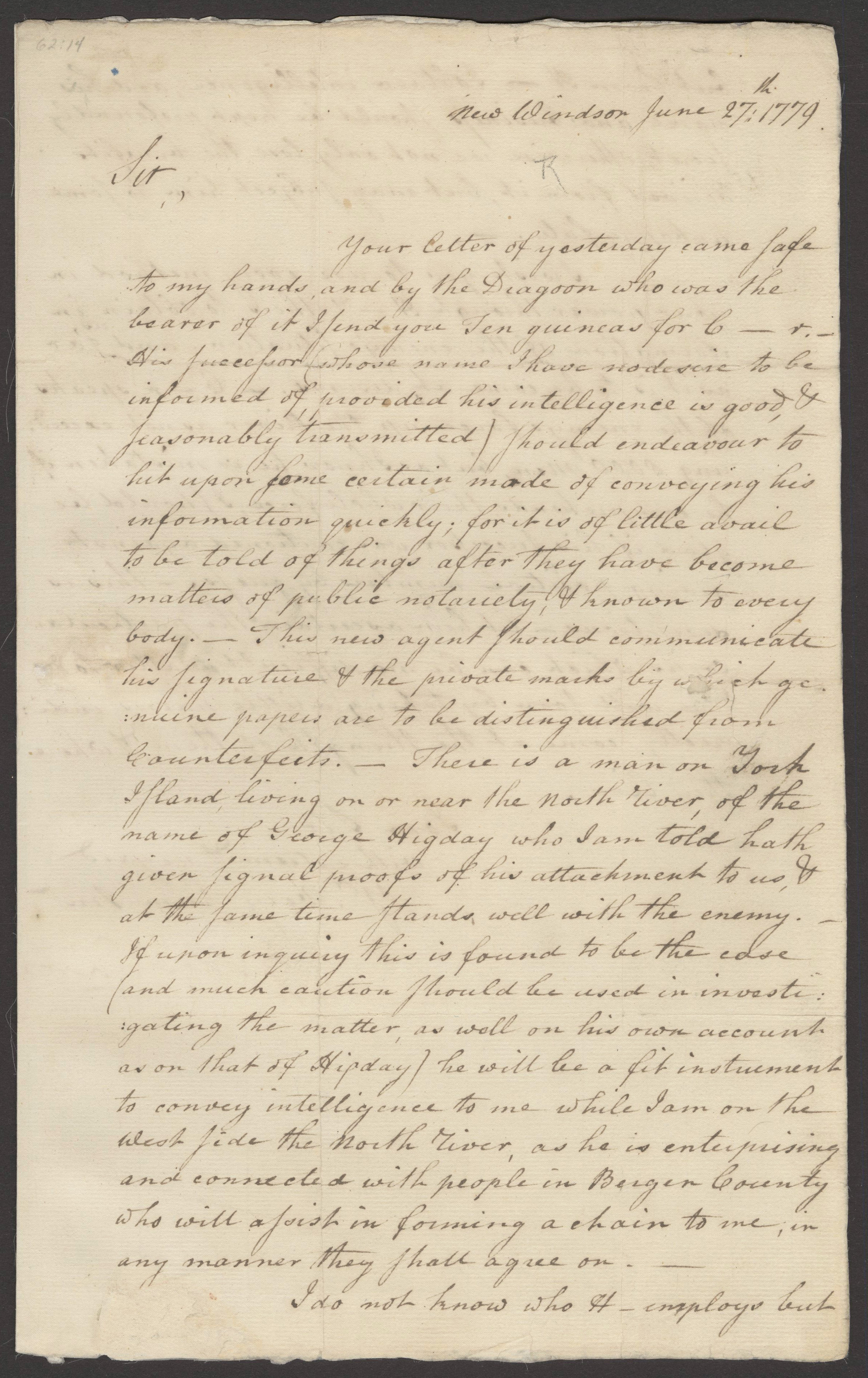 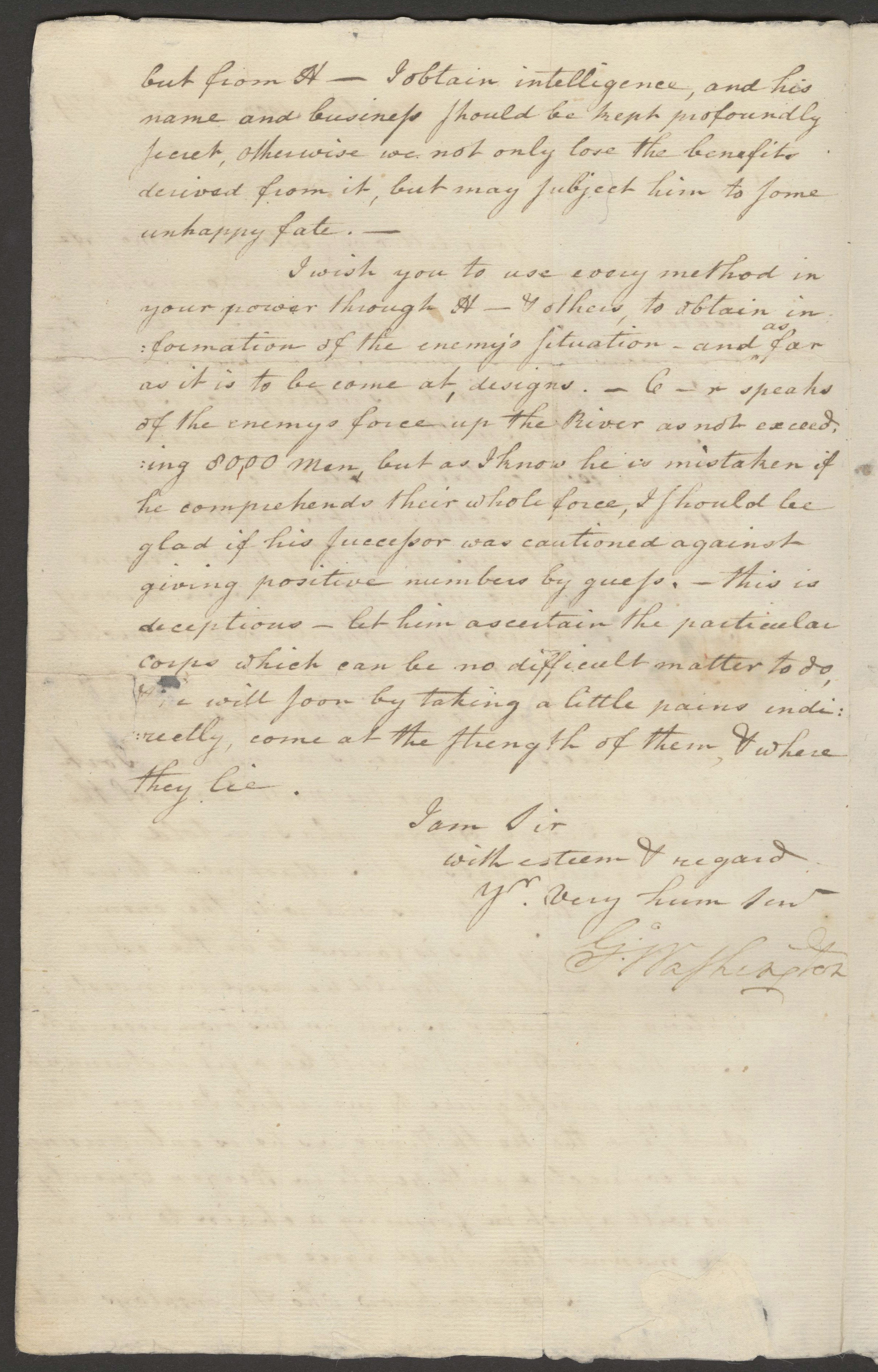 but from H–I obtain intelligence, and his / name and business should be kept profoundly / secret, otherwise we not only lose the benefits / desired from it, but may subject him to some / unhappy fate.– / I wish you to use every method in / your own power through H–& others, to obtain in- / formation of the enemy’s situation – and as far / as it is to be come at, designs.– C-r speaks / of the enemy’s force up the River as now exceed- / ing 8000 men, but as I know he is mistaken if / he comprehends their whole force, I should be / glad if his successor was cautioned against / giving positive numbers by guess. — this is / deceptious — let him ascertain the particular / Corps which can be no difficult matter to do, / & he will soon be taking a little pains, indi -/ rectly come at the strength of them & where they lie. / I am Sir / with esteem and regard, / Yr. Very hum servt. / Go: Washington

See the Story:  The Culper Gang

Return to Gallery of Letters