Reframing the Color Line: Race and the Visual Culture of the Atlantic World

REFRAMING THE COLOR LINE: RACE AND THE VISUAL CULTURE OF THE ATLANTIC WORLD

Presented by The William L. Clements Library and the Center for Afroamerican and African Studies at the University of Michigan

In the pre-Civil War North, Americans encountered African Americans in new and perhaps unexpected places. During the first full generation after the American Revolution, former slaves and their descendants migrated to urban centers. They made cities like Boston, New York, and Philadelphia their home. It was an era characterized by slavery’s gradual abolition and the building of an African American public culture of churches, political organizations, fraternal orders, and schools. Visual culture reminds us of their presence on city streets. Painters, lithographers, illustrators, portrait makers, and caricaturists incorporated black subjects into their representations of urban life.

“Reframing the Color Line: Race and the Visual Culture of the Atlantic World” examines these early constructions of race in visual culture and asks “what were the origins of racism’s visual vocabulary?” New answers emerge from an exploration of print collections, scholarship in cultural history, the history of art, and the trans-Atlantic context out of which early-American racism appeared. By investigating the relationship between early anti-black images from the United States, which undergirded slavery and racism, to French and British images, which rationalized European nationalism and colonialism, we understand more fully how ideas in the United States were are part of global currents of thought. This perspective on racism’s past also offers critical vantage point on today’s visual vocabulary of race and difference 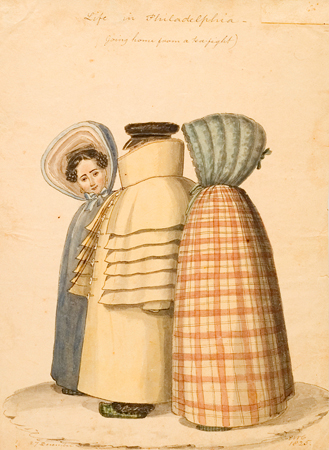