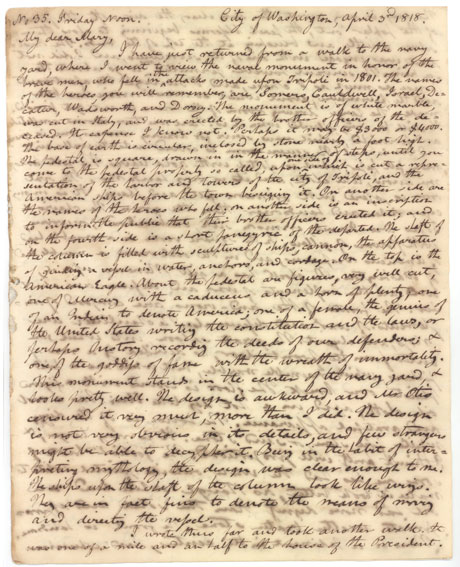 I have just returned from a walk to the navy yard, where I went to view the naval monument in honor of the brave men who fell in the attacks made upon Tripoli in 1801. The names of the heroes, you will remember, are Somers, Cauldwell, Israel, Decatur, Wadsworth, and Dorsey. The monument is of white marble, was cut in Italy, and was erected by the brother officers of the deceased. Its expense I know not. Perhaps it may be $3000 or $4000. The base of earth is circular, inclosed by stone nearly a foot high. The pedestal is square, drawn in the manner of steps, until you come to the pedestal properly so called, upon one side of which is cut a representation of the harbor and towers of the city of Tripoli, and the American ships before the town besieging it. On another side are the names of the heroes who fell; on another side is an inscription to inform the public that their brother officers erected it; and on the fourth side is a short panegyric of the departed. The shaft of the column is filled with sculptures of ships, cannon, the apparatus of guiding a vessel in water, anchors, and cordage. On the top is the American Eagle. About the pedestal are figures, very well cut, one of Mercury with a caduceus and a horn of plenty, one of an Indian to denote America; one of a female, the genius of the United States writing the constitution and the laws, or perhaps History recording the deeds of our defenders; & one of the goddess of fame with the wreath of immortality. This monument stands in the center of the navy yard, & looks pretty well. The design is awkward, and Mr Otis censured it very much, more than I did. The design is not very obvious in its details, and few strangers might be able to decipher it. Being in the habit of interpreting mythology, the design was clear enough to me. The ships upon the shaft of the column look like wings. They are in fact fins to denote the means of moving and directing the vessel.