Below are books on the Barbary Wars, some of which used Clements Library’s material:

The Barbary Wars: American Independence in the Atlantic World (2005), by Frank Lambert, gives a concise account of both Barbary wars, with focus on the lead up to the first conflict.

The End of the Barbary Terror (2006) by Frederick C. Leiner, focuses on the second Barbary War.

Commodore John Rodgers: paragon of the early American Navy (2006), by John H. Schroeder, part of the New Perspectives on Maritime History and Nautical Archaeology, is a biography of Rodgers that contains many references to the Clements Library’s collections.

The Pirates of Barbary (2010), by Adrian Tinniswood, provides a wider overview of the conflict between the Barbary States and Europe going back to the fifteenth century.

The Pirate Coast: Thomas Jefferson, the First Marines, and the Secret Mission of 1805 (2005), by Richard Zachs, is a lively narrative of the First Barbary War.  Zachs relied heavily on the Clements Library’s Tobias Lear papers for behind-the-scenes details on the negotiation process.

Below are links to additional Barbary Wars resources, including essays on the conflict, primary documents, and K-12 lesson plans for teaching the Barbary Wars:

America and the Barbary Pirates: An International Battle Against an Unconventional Foe, by Gerard W. Gawalt of the Library of Congress, is a discussion of Thomas Jefferson’s role in the Barbary conflict.

Yale’s Avalon Project features the complete text of the Barbary treaties created between 1786 and 1816. 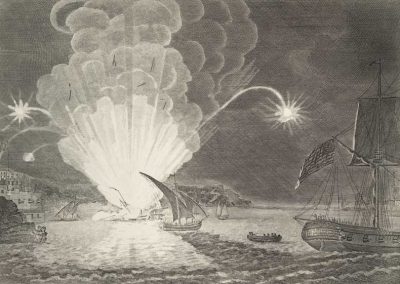