Henry Burbeck was born in Boston, Massachusetts, on June 8, 1754, the son of William Burbeck (1715-1785) and his second wife Jerusha Glover Burbeck (1722-1777). His father served in the Ordinance Department of the Royal Artillery at Old Castle William, Boston Harbor, in the years leading up the American Revolution. In 1775, at the age of twenty, Henry Burbeck joined Captain and Brevet-Major Amos Paddock’s Chartered Provincial Artillery Company. When news of the skirmish at Lexington reached Boston, he left the city for Cambridge and joined a volunteer company of artillerists commanded by Captain Jotham Horton. Burbeck received his first commission on May 19, 1775, as Lieutenant in the Massachusetts Artillery Regiment under the command of Colonel Richard Gridley. 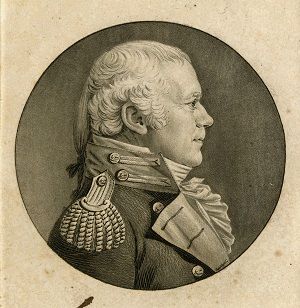 Burbeck was promoted to First Lieutenant on January 1, 1776, and he served at the Siege of Boston until the British evacuated the area in March 1776. He marched to New York in April and served there until the Americans fled the city on September 15, 1776. He assisted in the defense of the Hudson Highlands while attached to Brigadier-General Samuel Holden Parson’s brigade. Burbeck became Captain-Lieutenant of the Massachusetts Artillery on January 1, 1777, but served only a short time before receiving orders to join the main Continental army under the command of General George Washington. He was promoted to Captain on September 12, 1777, and assumed command of the 3rd Continental Artillery Regiment. Burbeck fought in the battles at Brandywine, Germantown, and Whitemarsh. He was present at Valley Forge during the winter of 1777-1778.

Burbeck pursued Sir Henry Clinton through New Jersey in 1778, and fought at the Battle of Monmouth. He served in the New York and New Jersey campaigns of 1779 and 1780, and spent 1781 to 1783 in defense of the Hudson Highlands. On September 30, 1783, he earned a promotion to Major by brevet. He was present on November 25, 1783, when the city of New York was reclaimed by the Americans. Burbeck then served at West Point until his honorable discharge on January 1, 1784.

Burbeck was re-commissioned as Captain of Artillery on October 20, 1786, under Major John Doughty. He commanded at West Point from August 1787 to August 1789. He then marched with his company to Georgia to serve as a guard for commissioners appointed to treat with the Creek Nation. The treaty failed to materialize and Burbeck returned to West Point. Captain Burbeck returned to Georgia in April 1790, oversaw the construction of Fort St. Tammany, and served as commandant of the post until June 1792. On November 4, 1791, Burbeck was appointed Major Commandant of the Battalion of Artillery. Upon leaving Georgia in June 1792, Burbeck became Chief of Artillery, attached to Major-General Anthony Wayne’s Western Army. 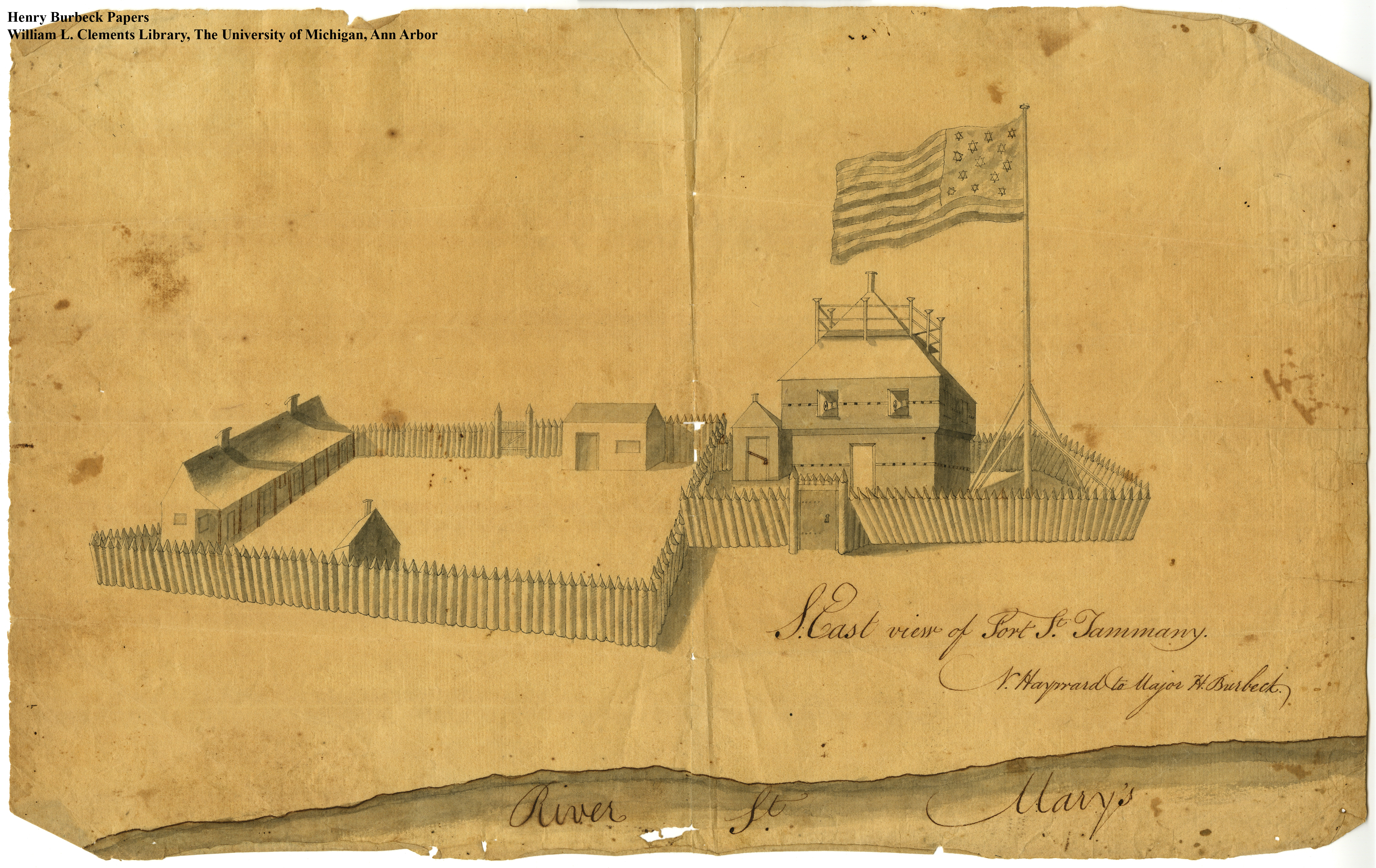 On December 23, 1793, Wayne commanded Burbeck to proceed to the site of St. Clair’s defeat to erect a fort on the former battleground and to recover any remaining ordnance. Burbeck promptly built the fort, which was fittingly named Fort Recovery (plan from the Burbeck Papers pictured to the left). He managed to recover artillery pieces that had been abandoned during the battle and buried approximately two hundred bodies of American soldiers that had been killed there in 1791. Burbeck participated in the American victory at the Battle of Fallen Timbers on August 20, 1794.

Burbeck’s service in the Northwest continued: in response to the terms of Jay’s Treaty, he sailed to Fort Mackinac to receive it from the British garrison in September 1796. Following the discharge of Colonel Rochefontaine in May 1798, Burbeck received an appointment as Lieutenant Colonel. Burbeck remained at Mackinac until he assumed command at Detroit, where he arrived on November 17, 1799. Around eight months later, he received orders to return to Washington and take command of the Eastern Division of the army. 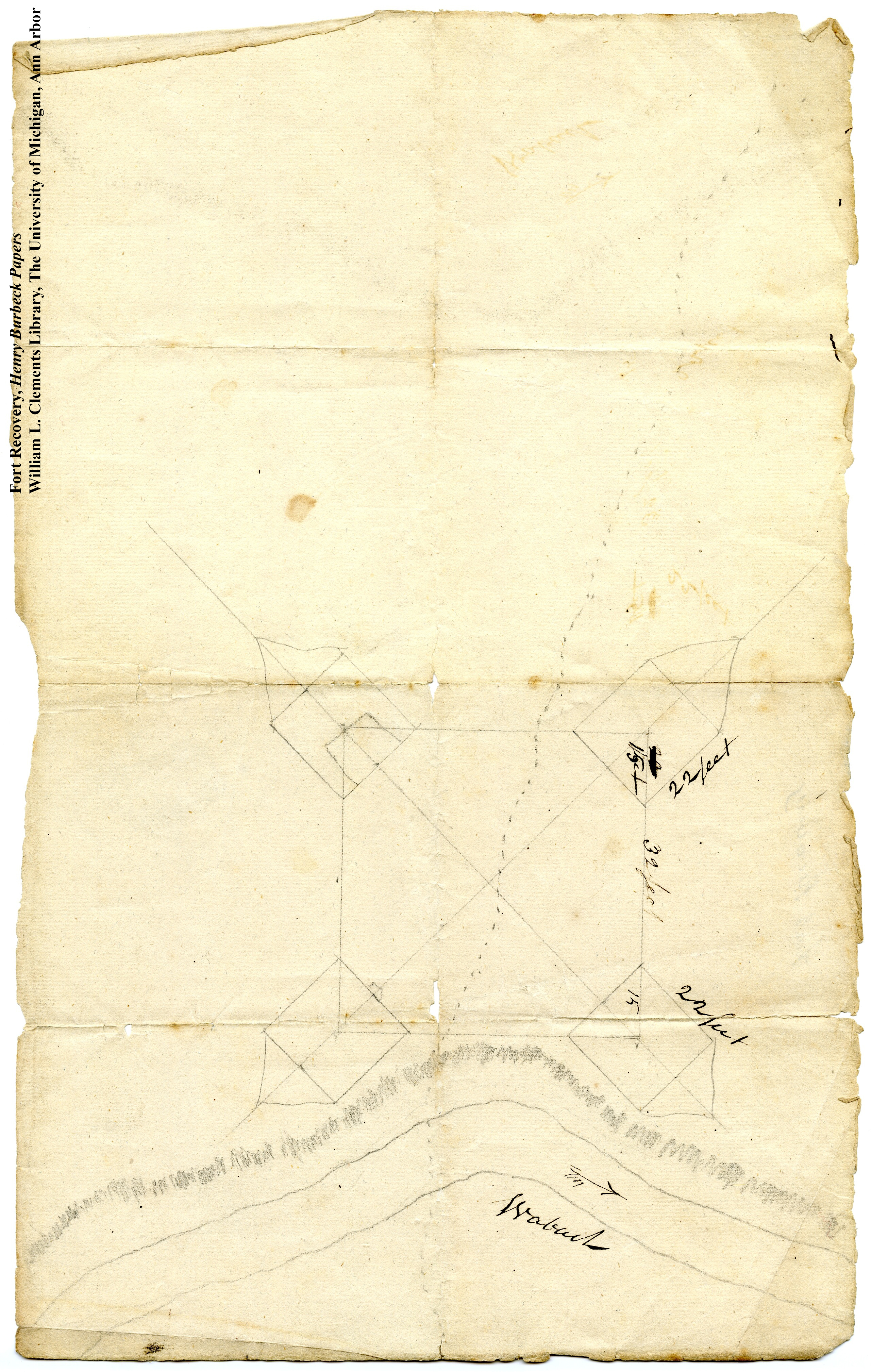 Henry Burbeck helped to establish a separate Regiment of Artillerists during the dramatic reduction and restructuring of the Army in March 1802. Burbeck was promoted to Colonel on April 1, 1802, and he served as Chief of Artillery until his retirement in 1815. During the remainder of his career, Burbeck visited or established headquarters at many different military posts.

Burbeck assumed command of Detroit for the second time in June 1803, before moving to Fort McHenry at Baltimore in 1804. In 1805, Senior Officer of the Army James Wilkinson appointed Burbeck as commander of “the troops and garrisons east of the mountains, of those on the lakes and their waters, of South West Point and Fort Wilkinson.” Burbeck does not appear to have ventured west with Wilkinson and he remained stationed in Washington until he received orders in August 1808 to return to Detroit. Burbeck was not pleased: “many must have been my sins or crimes and manifold has been my transgression, or I should never have been sent to this remote post” (Burbeck, November 26, 1808).

Before embarking on the Brig Adams, which would take him to Detroit, Henry Burbeck stayed over a month at Fort Niagara, writing that “it is in an intire [sic] state of ruin” but that “the police, discipline and dress of this Garrison is properly attended two [sic]” (Burbeck, September 29, 1808). Burbeck arrived in Detroit on October 27, 1808, and felt much the same: “the dirtiest place…I most ever saw” (Burbeck, December 4, 1808). Plan of Fort Detroit, “Fort Leanue,” from the Burbeck Papers pictured immediately below. 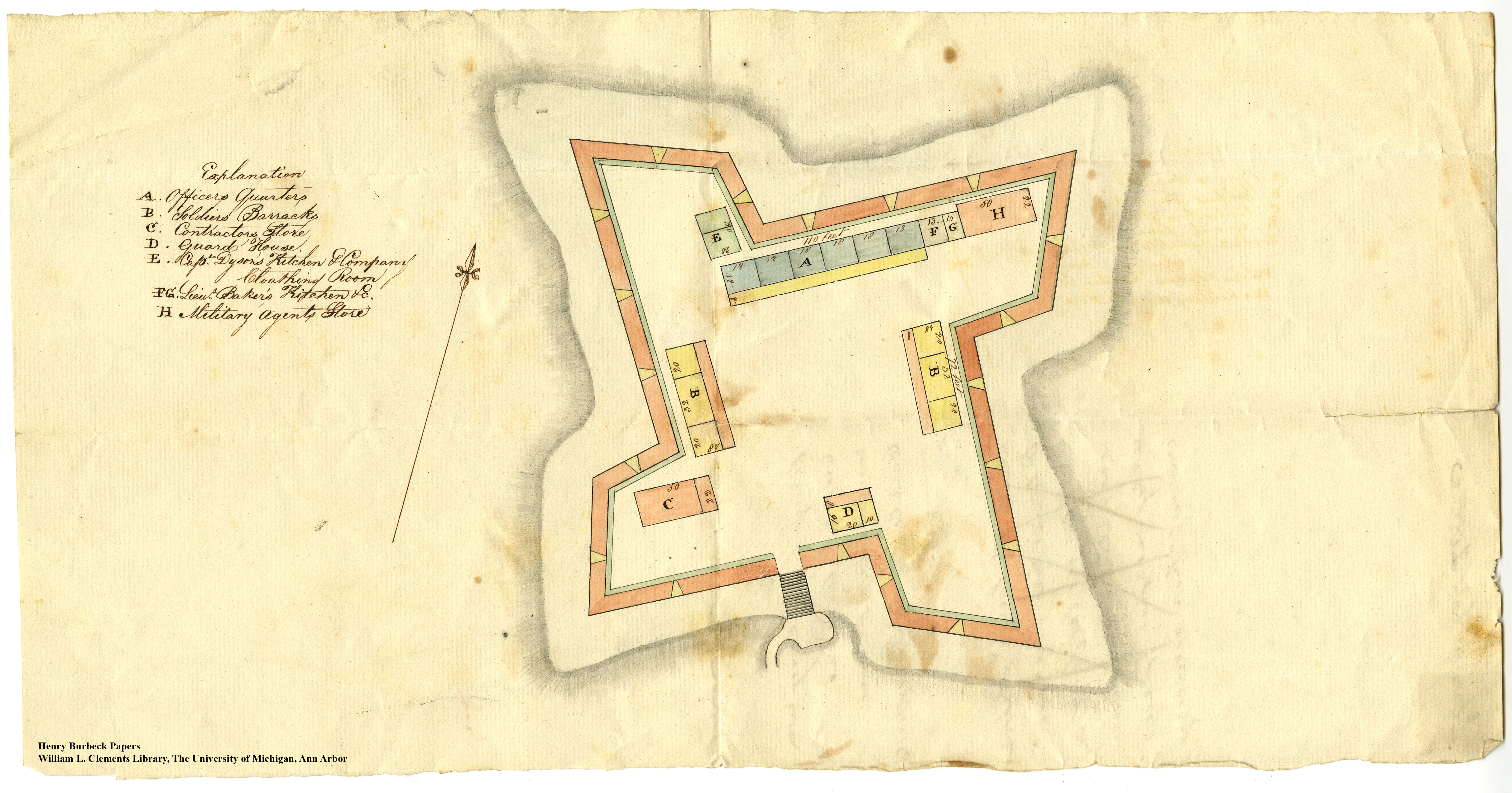 Burbeck’s time in Detroit proved to be short; he was ordered back to the eastern seaboard in the spring of 1809. After his arrival in Boston in August of 1809, he began a tour of the forts in the northeast with the newly appointed Secretary of War William Eustis. Burbeck spent the next three years traveling between New York and Washington. He established the New York Arsenal and placed Lieutenant George Bomford of the Engineers in charge. He also oversaw improvements to the fortifications in New York harbor.

During the War of 1812 Burbeck held command at New York, Boston, Newport (R.I.), New London (Conn.), and Greenbush (N.Y.). He was brevetted Brigadier General on July 10, 1812, according to official records, though a letter within this collection from Thomas Cushing dated October 28, 1812, states, “I have the honor to enclose a Brevet Commission.” Burbeck did not always have high opinions of the other officers in the Army; upon being removed from command of New York in the spring of 1813 in favor of Brigadier General George Izard, he remarked “I never professed to be a patriot in Old Times and I have always dispised [sic] it in modern days and of course I must set down in the moon shine and be hid from the waundering [sic] multitude whome [sic] I allways [sic] dispised [sic]—however I have one consolation they will make no improvement on the Island” (Burbeck, May 22, 1813). 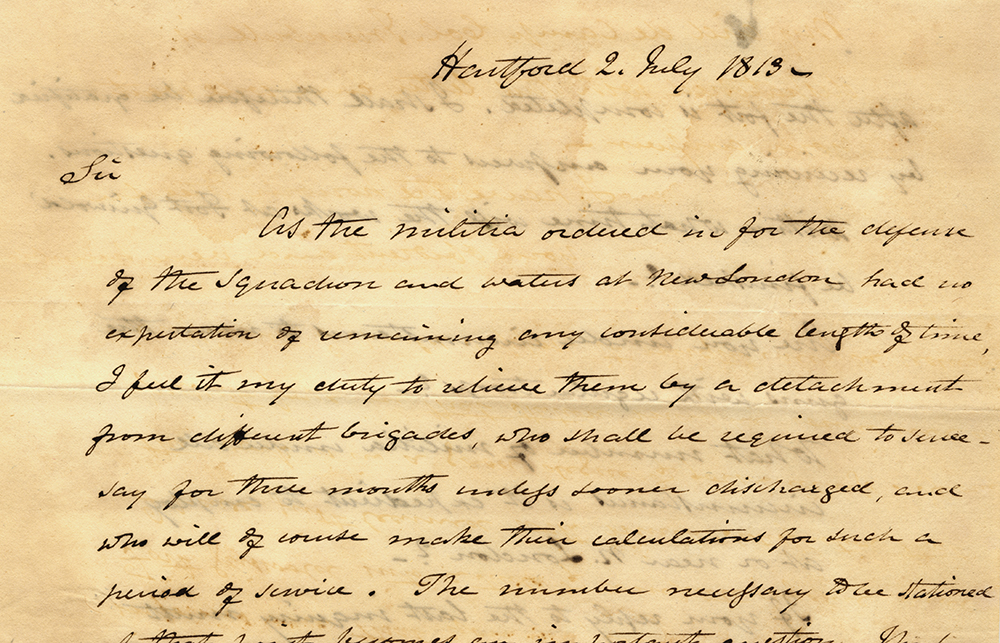 Almost immediately upon his arrival at New London in July 1813, after a short stint in Boston and Newport, he was ordered by the Secretary of War John Armstrong to discharge the militia in that vicinity. The militia had only recently been ordered there by Governor John Cotton Smith because of rumors of a British attack on the town. This event caused great uproar, with one paper proclaiming, “Our readers must draw their own inferences–to us the conduct of the general government is inexplicable” (Boston Gazette, July 15, 1813). Seven letters in this collection from Governor Smith to Burbeck between July and October 1813 shed further light on this matter.

Henry Burbeck took command at Greenbush, New York sometime in July 1814. On December 28, 1814, he was visited by a British agent dispatched by Sir George Prevost, Governor General of Canada, to observe and report on the treatment of British prisoners at that place. The agent, Mr. Wybault, reported that the prisoners were held in unsatisfactory accommodations and given inadequate supplies.

On July 15, 1815, Burbeck was honorably discharged from the Army, ending almost thirty eight years of faithful military service. He spent the reminder of his life in New London, Connecticut. On one occasion, he dined with Lafayette when the General visited New London in August 1824. Burbeck died on October 2, 1848. He was an active member of the Massachusetts Society of Cincinnati, serving as president at the time of his death. 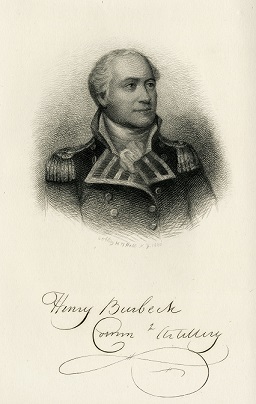 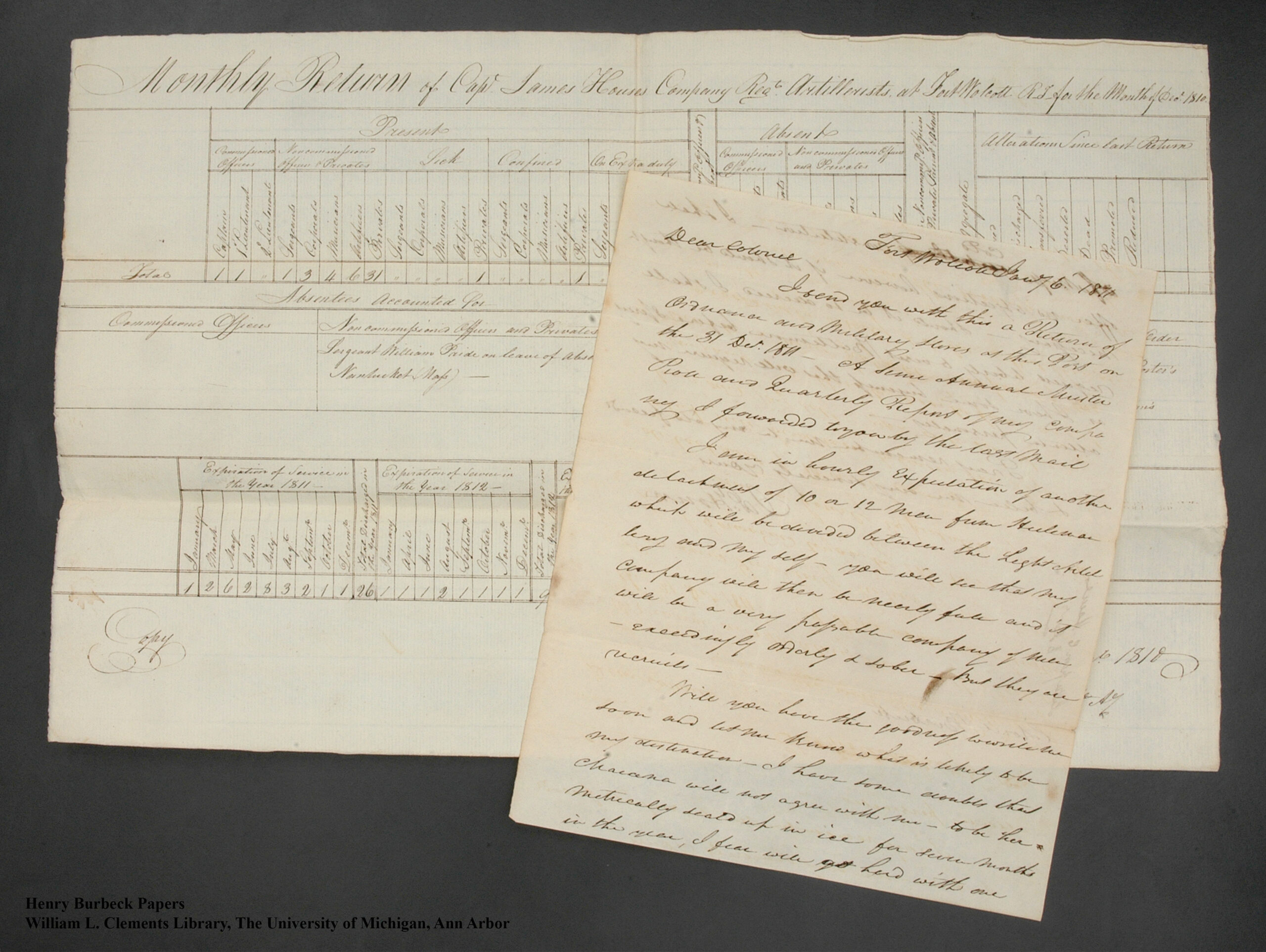