Home » Public Programs » Online Exhibits » “No, not even for a picture”: Re-examining the Native Midwest and Tribes’ Relations to the History of Photography » Complex Nationalism

A Case Study on the Minnesota Dakota War of 1862

Colonialism: Refers to one nation establishing its presence in another, usually by force. It refers to the policy of one or more countries seeking to extend or retain authority over other people or territories, generally with the aim of economic dominance by benefitting from the colonised region’s people and resources.

Tribe: The terms tribe, nation, and band all refer to the political independence or sociopolitical organization of a group of people. Historically, the word tribe refers to a group who share a common descent or ancestry, community customs, and major leaders. Tribes typically share additional aspects of culture, such as a shared ancestral language or religious beliefs, but a shared language alone does not demarcate a tribe.

Since the American Revolution in the late 1700s, American Indians and Native Alaskans have served in the United States Armed Forces above the national average and per-capita rates by ethnicity. Motivations for joining the military vary widely, and particularly during the 19th century, Native individuals found themselves on both sides of conflicts between the United States military and Indigenous tribes.

During the Civil War, Congress failed to provide supplies guaranteed by treaties to tribes located in or previously removed to Minnesota. In response, local tribes rose up against settlers to reclaim land, sovereignty and resources in what is known as the Dakota War of 1862, or the Sioux or Dakota Uprising.

The violent events and subsequent military trial and mass-execution of participants was national news. Photographer Joel E. Whitney, a preeminent pioneer photographer based in St. Paul, fed an ongoing public demand with a series of portraits and views circulated in carte de visite format. Measuring 6 x 10 cm, about the size of baseball trading cards, cartes de visite were easy to carry, slip into albums, and mail to friends. Whitney’s portraits offer a profound glimpse into the figures of the Dakota War. 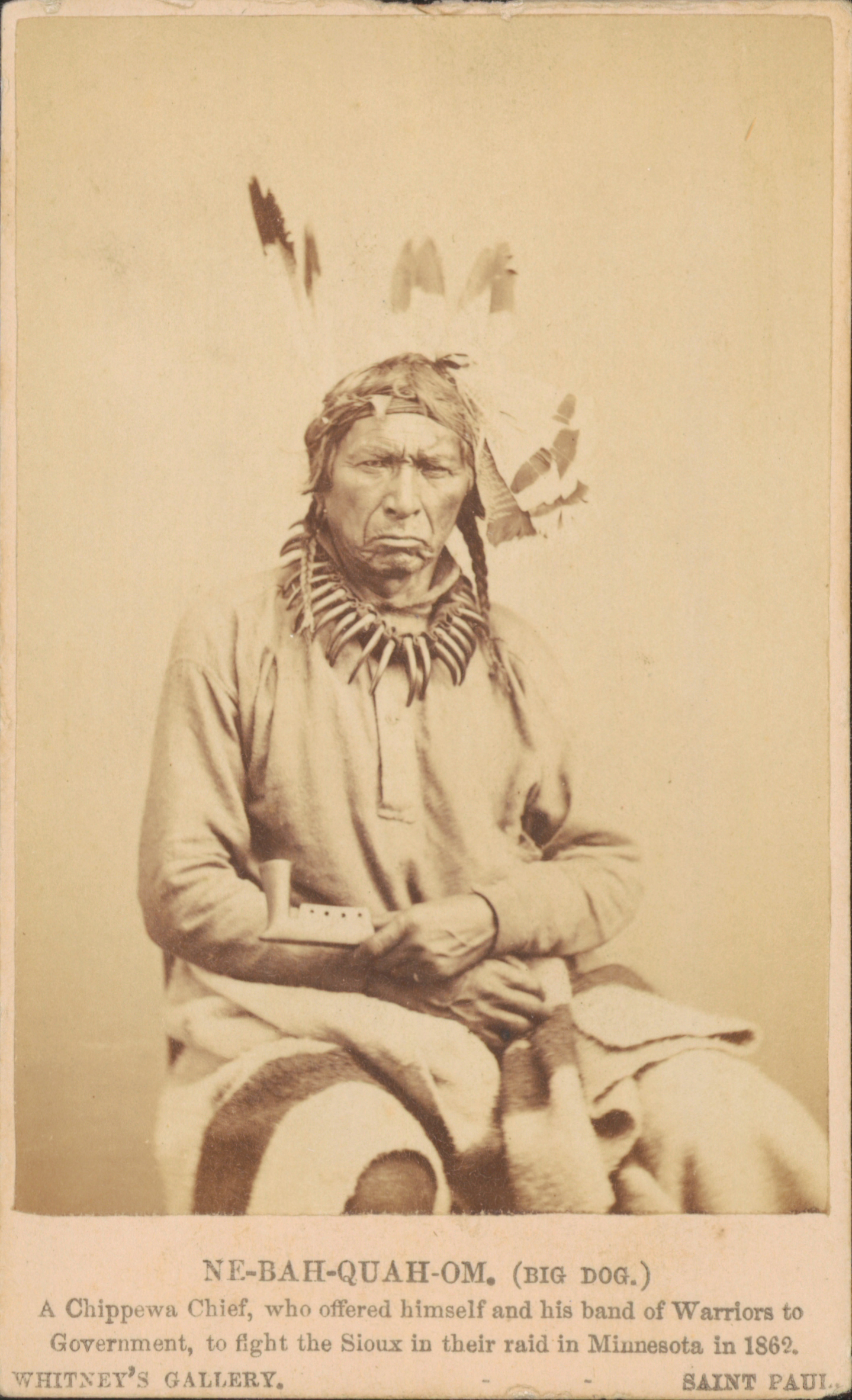 Ne-Bah-Quah-Om, an Ojibwe chief also known as Big Dog, offered himself and his band of warriors to the United States government to fight alongside settlers against the Sioux in the 1862 rebellions. He was likely motivated by the longstanding history of animosity between the Sioux and Anishinaabe tribes, who frequently vied for similar land and resources.

Ne-Bah-Quah-Om wears a mixture of western and traditional clothing, including a feather headdress, blanket, and bear claw necklace, a sign of power. He is also seen holding a calumet, a long-stemmed ceremonial tobacco pipe traditionally used as a symbol of peace or truce.

Anpetu-Tokeca (pronounced: An-petu-to-keca), or John Other Day, was a well-known Dakota tribal leader. His life story is often reduced to the conversion narrative trope of a fierce warrior turned Christian farmer. Shortly after Minnesota became a state in 1858, Other Day was on a delegation trip to Washington D.C., where he met Roxanna, a British-American woman who would become his wife and return with him to Minnesota.

During the Dakota War, he was a scout for Minnesota’s first governor, General H. H. Sibley, and is credited with helping 62 settlers avoid violence by giving advance notice of the rebellions and guiding them over 150 miles to safety with the aid of his wife.

The verso is inscribed: “A friendly Indian, & a noble fellow. Was with us at the battle of “Wood Lake” was close beside me for some time We killed three Indians & captured two ponies.” 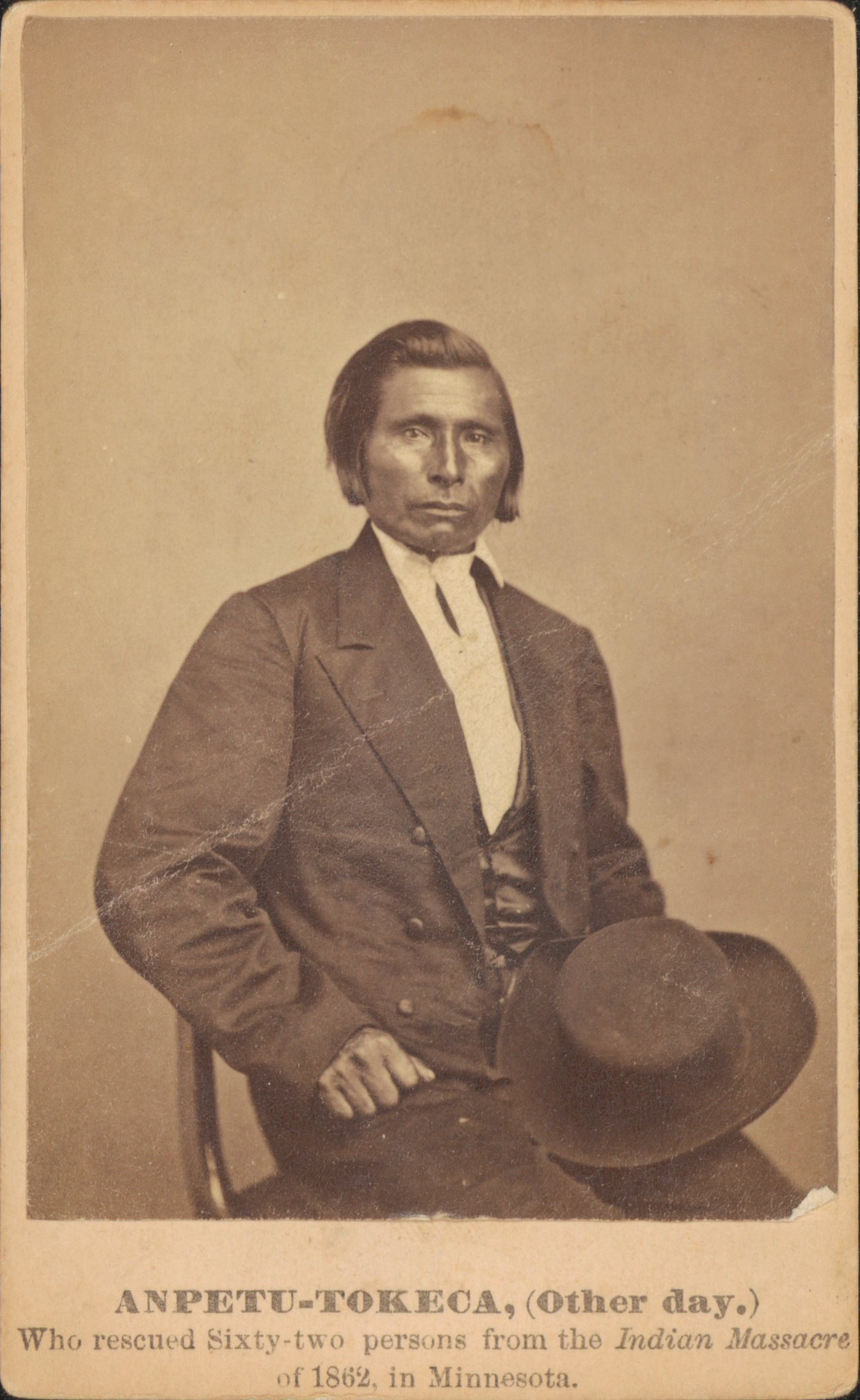 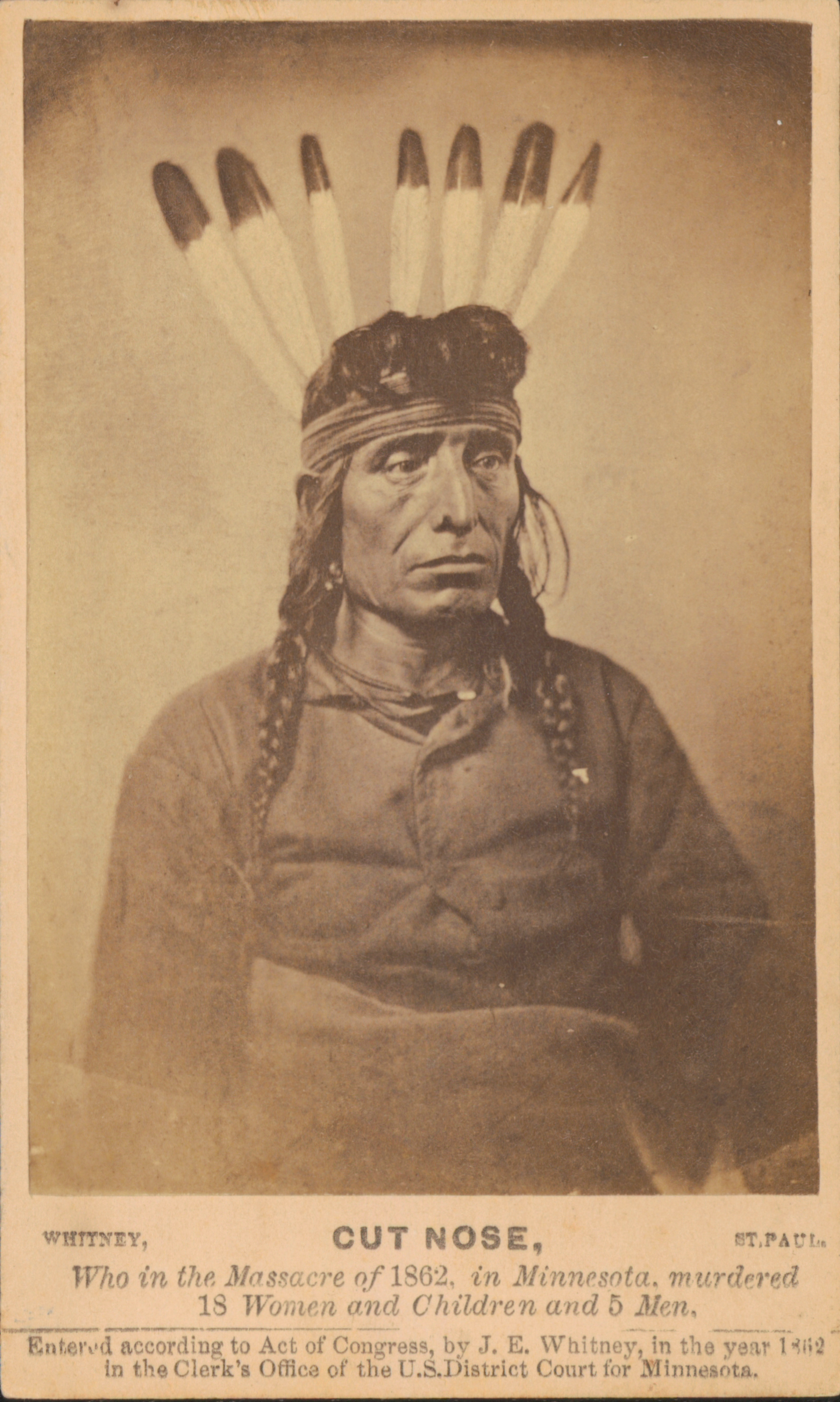 Marpiya Okinajin (pronounced: Mar-piy-a O-kin-a-jin) was also known as Cut Nose or He Who Stands in the Clouds. His vibrant life was filled with stories of hunting, fighting, and womanizing. Cut Nose’s distinctive name is credited to John Other Day, who allegedly bit off a chunk of his nose during a fight.

During the Dakota War, Cut Nose fought to restore Santee Dakota sovereignty in Minnesota and is remembered for his leadership and brutality in the uprisings at Fort Ridgely, Minnesota. He was ultimately executed for his violence against settlers on December 26, 1862.

After his death, William Mayo, a founder of the Mayo Clinic, exhumed Cut Nose’s remains to use for science experiments, keeping his bones for over a century and a half.

The eagle feathers appearing in this photo were likely retouched into the photo after it was taken.

Wa-Kan-O-Zhan-Zhan, or Medicine Bottle, was a Sioux wicasa wakan, or holy man, who stepped away from that role to defend the Dakota way of life in the rebellions.

After the uprising, Congress called for the removal of all Sioux from Minnesota, leading Medicine Bottle to flee to Canada. Two years later, he was found, drugged, and brought as a prisoner to Fort Snelling, Minnesota, where he was tried for his participation in the 1862 uprisings.

He was executed three years after the initial trial. This photo was taken shortly before his death. 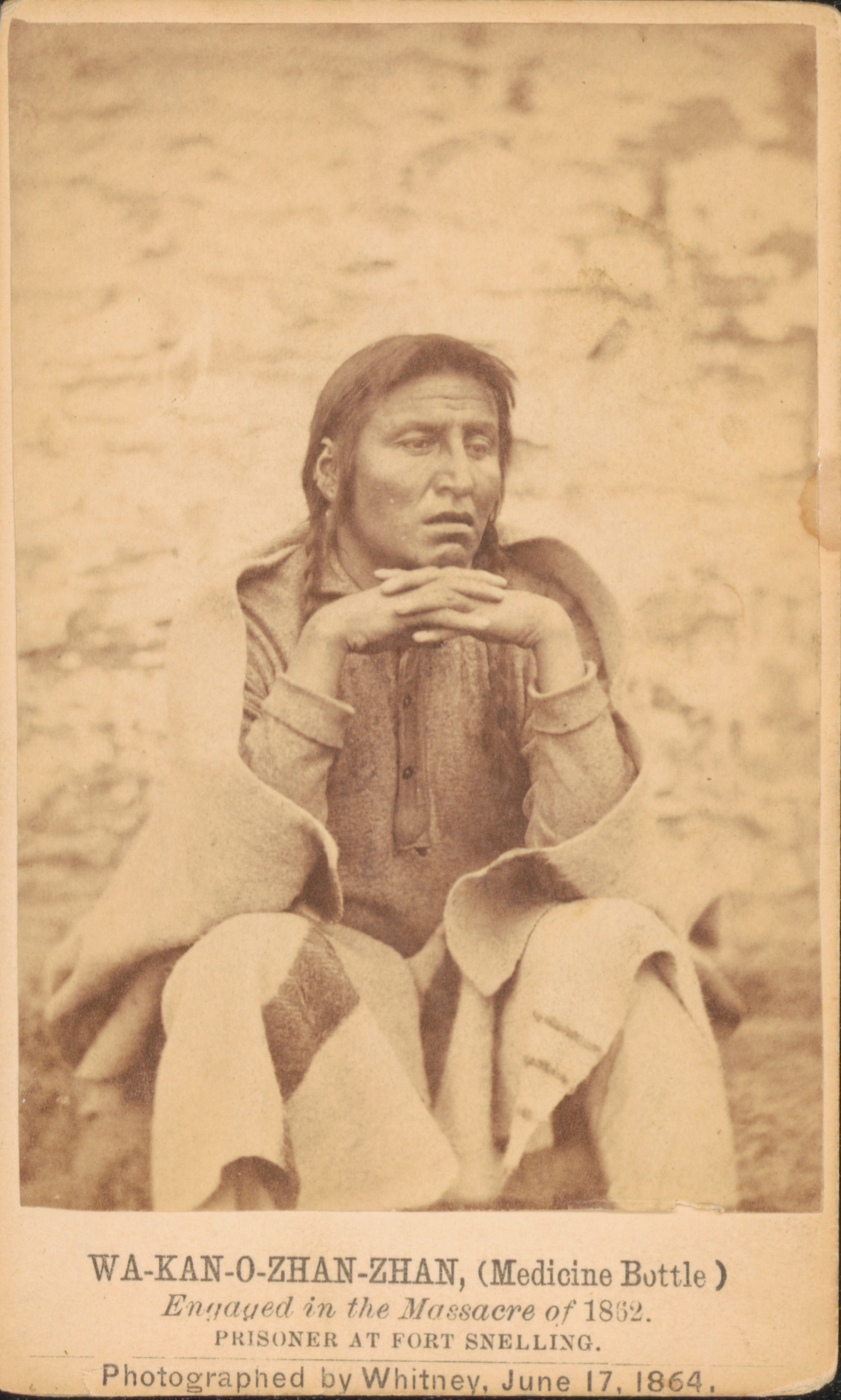 In the wake of the Dakota War, the US military court-martialed 425 American Indians for violence against settlers. Of those, the settler courts sentenced 303 to death in Mankato, Minnesota. While being transported to the execution site, angry settlers threw objects and beat them, killing one Native en route.

The question of what legal forms of oppression look like is one that the United States was only just beginning to grapple with.

Throughout the trial, news spread. President Lincoln intervened to commute all but 39 of the sentences. (Lincoln later pardoned one more person). Some understood this as salvaging the Union’s moral superiority to the Confederacy, designed to play into international sympathies, rather than reflecting a trend in favor of Native sovereignty in Lincoln’s larger policy. The question of what legal forms of oppression look like is one that the United States was only just beginning to grapple with.

A number of settlers, angered by Lincoln’s pardons, formed secret white-supremacist organizations. One such organization, the Knights of the Forest, sought to exterminate all Indians in Minnesota.

December 26, 1862 continues to be the largest single-day mass execution in United States history. Afterwards, some of the 38 were found to have been misidentified or innocent. Others, like Medicine Bottle, were later tried and executed.