Home » Public Programs » Online Exhibits » “No, not even for a picture”: Re-examining the Native Midwest and Tribes’ Relations to the History of Photography » Displaced Portraiture

A Case Study on Documenting Removal

Federal Recognition: An American Indian or Alaska Native tribal entity that is recognized as having a government-to-government relationship with the United States. Federally recognized tribes are recognized as possessing certain rights of self-government and are thus not subject to state laws, only federal laws. This status is usually achieved through historical documents such as treaties or court decisions.

While many hear the word “treaty” and imagine an objective legal document that two parties agree upon, the reality can be less straightforward. In many Native communities, treaties continue to be associated with coercion and deceit. This section explores two examples that speak to the painful outcomes of treaty execution, through the Prairie Band Potawatomi removal to Kansas, and the violence of treaty violation, through the Burt Lake Band Burnout.

Compliance with treaties between Native tribes and the United States often drove a wedge through Indigenous communities. The resulting tribal fragmentation necessitated new bands forming, like the Prairie Band Potawatomi who were relocated to Kansas. In 1838, the U.S. government ordered the removal of any remaining Potawatomi in Indiana, leading to what is referred to as the Potawatomi Trail of Death, a two-month march from Indiana to Kansas. The next two portraits are from a larger series that features Potawatomi individuals living in Kansas. 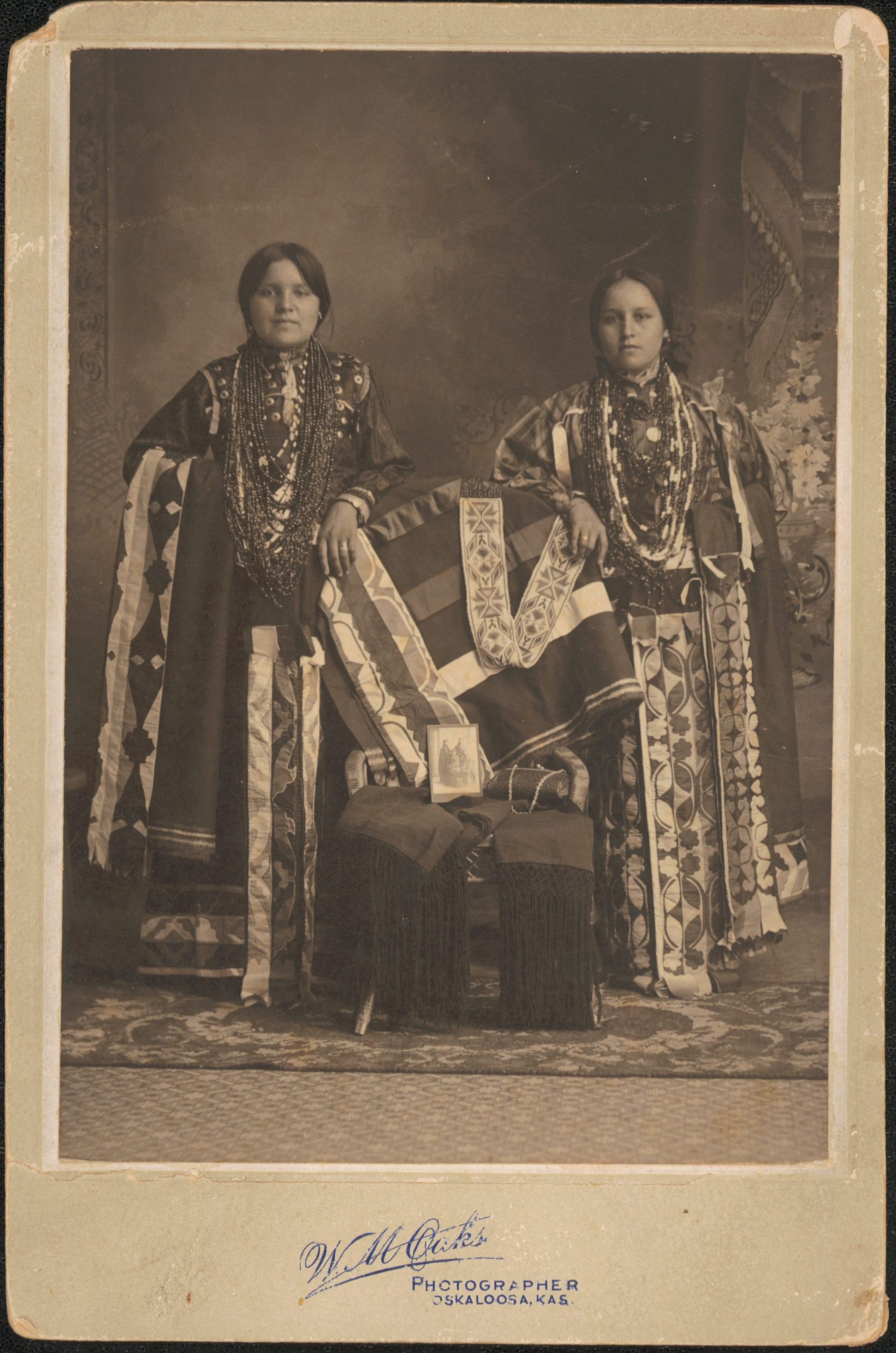 These two unidentified Prairie Band Potawatomi women likely asked to be photographed in W.M. Oaks’ studio in Oskaloosa, Kansas. The chair in the center is decorated with personal items, including an embroidered sash, a blanket, a western-style leather purse, and what appears to be a family portrait of at least three people.

This arrangement is consistent with pictures created in memoriam of deceased individuals, who likely owned the items decorating the chair. In posing with these objects, the women assert agency over their representation while commemorating their lost loved ones. Life and death were still honored by those undergoing cultural oppression and removal. 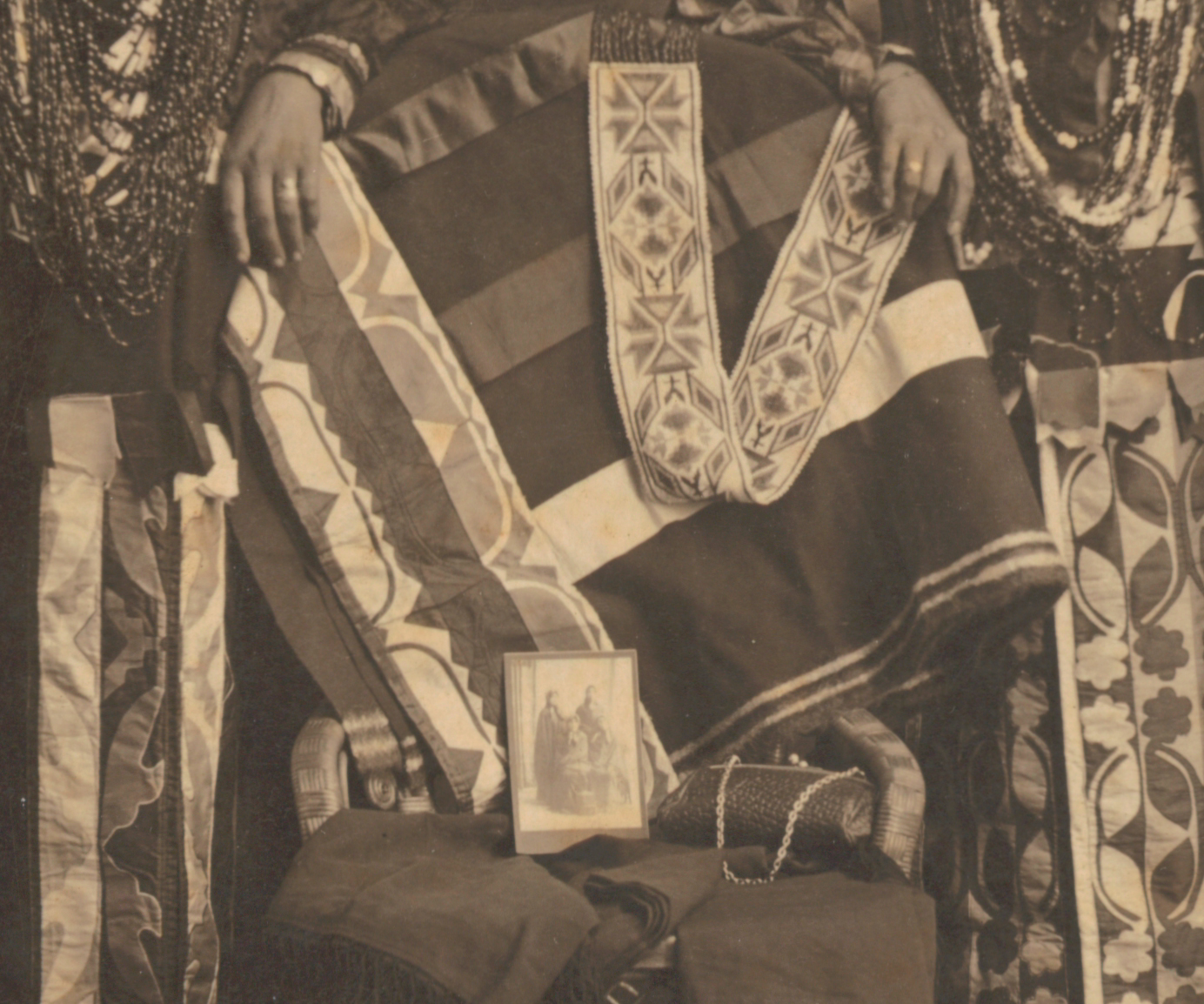 In stark contrast to the portrait of the two women, this portrait focuses solely on one man and his direct gaze back.

Compounding this effect, this photograph taken in Topeka, Kansas, features no studio backdrop, decorative carpet, or other embellished portrait features. 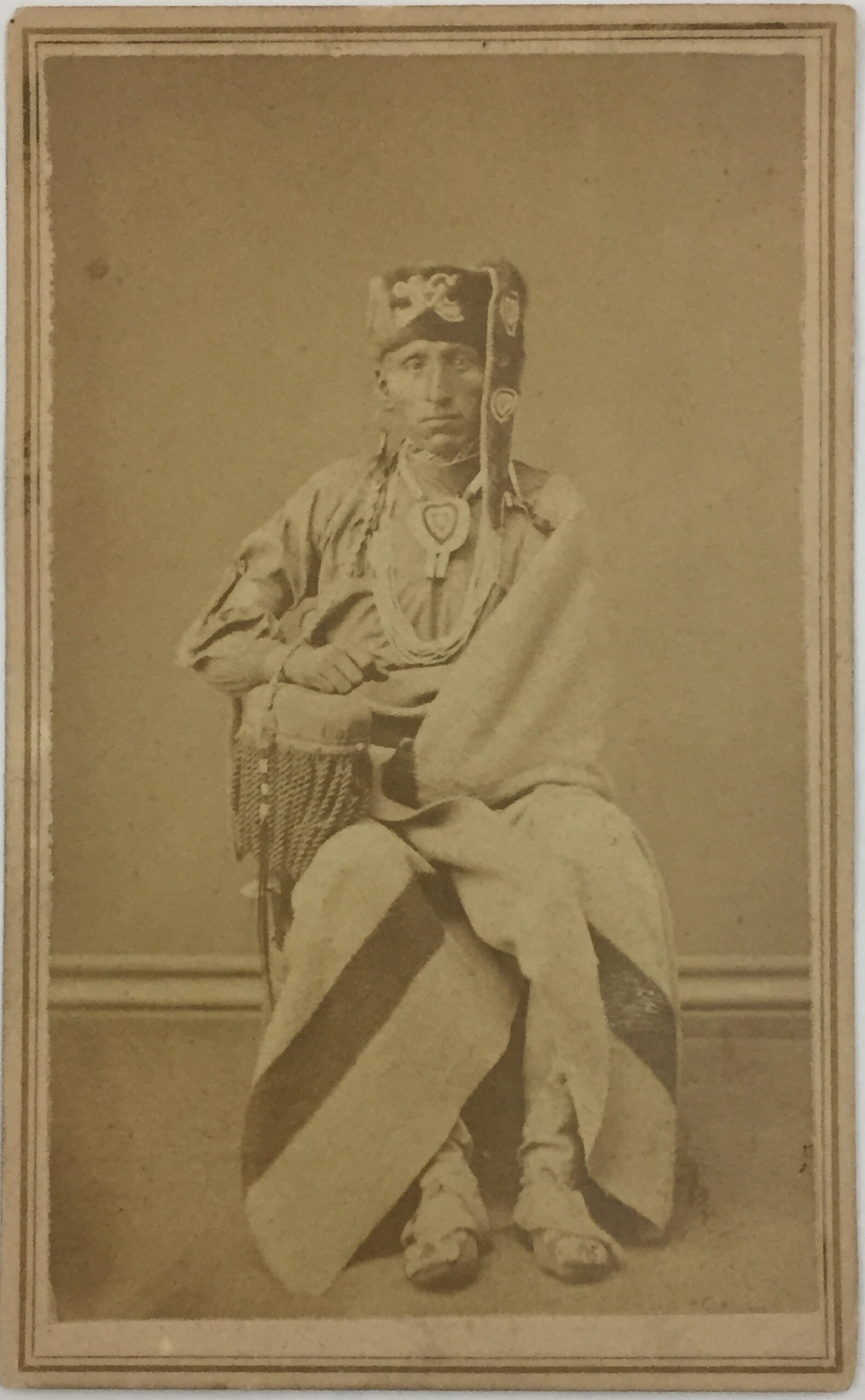 Portraits like those of the Prairie Band Potawatomi document the resilience and continued presence of tribal communities, even as they split due to treaty execution. Photographs documenting treaty violation, however, are more difficult to come by. 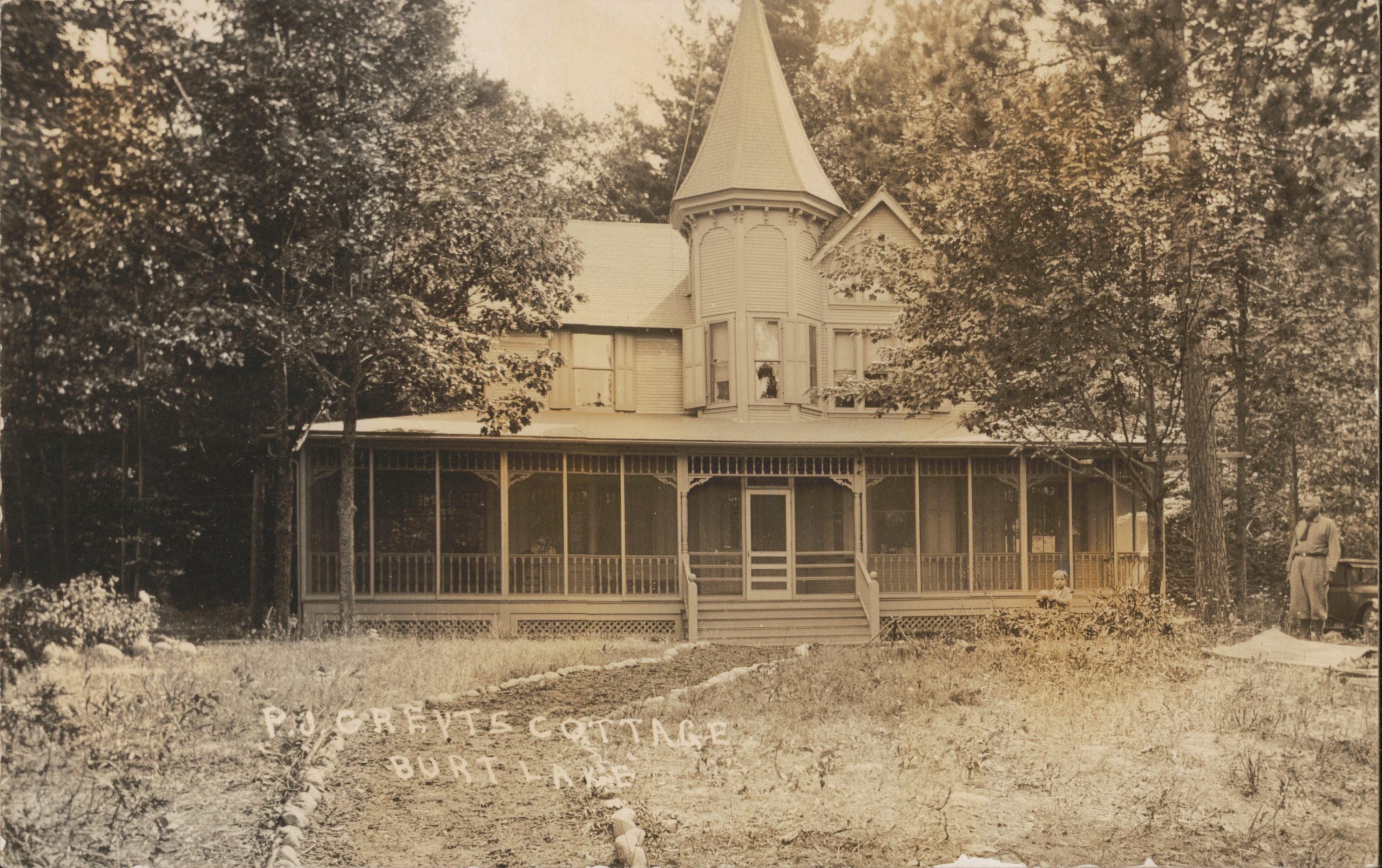 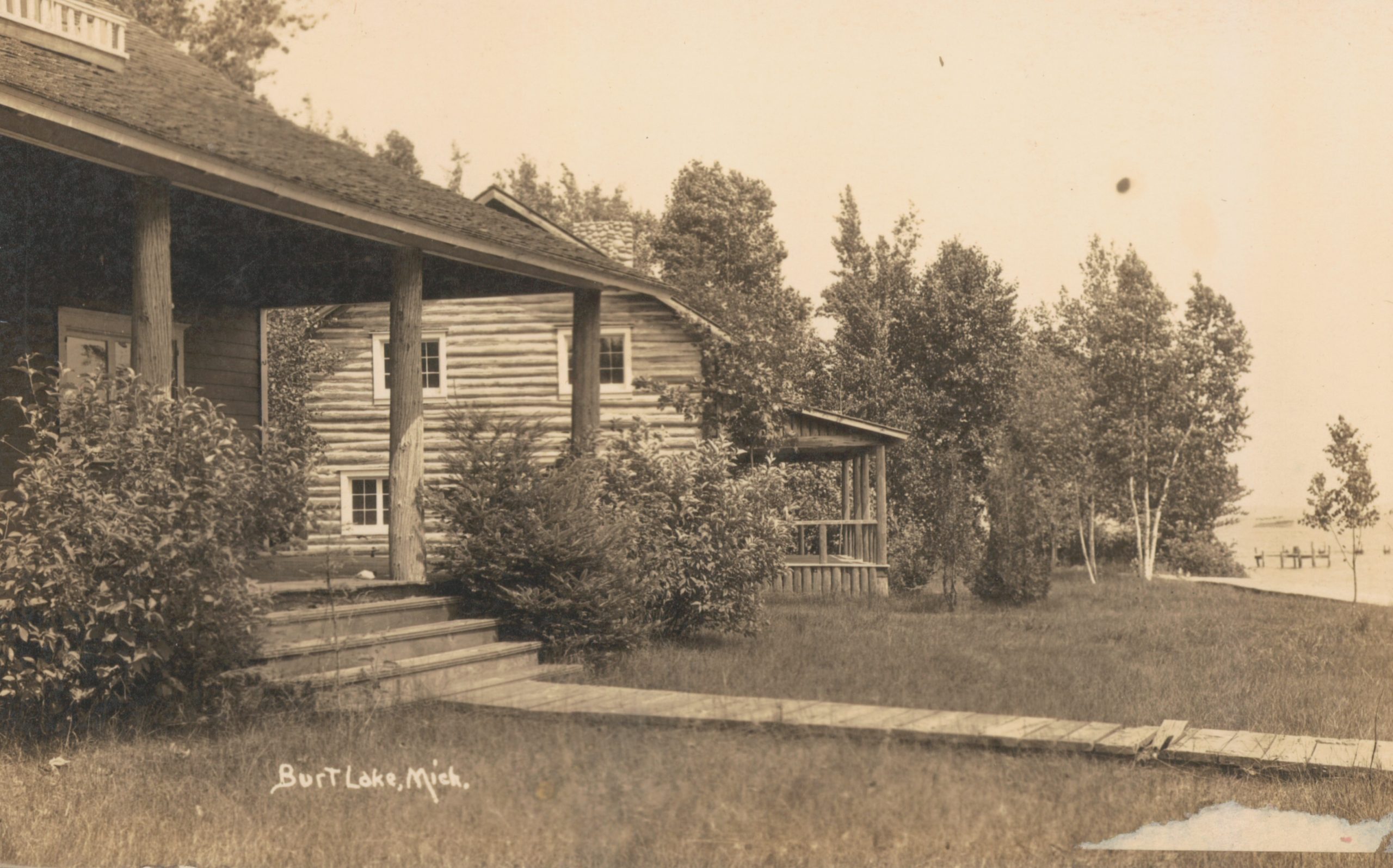 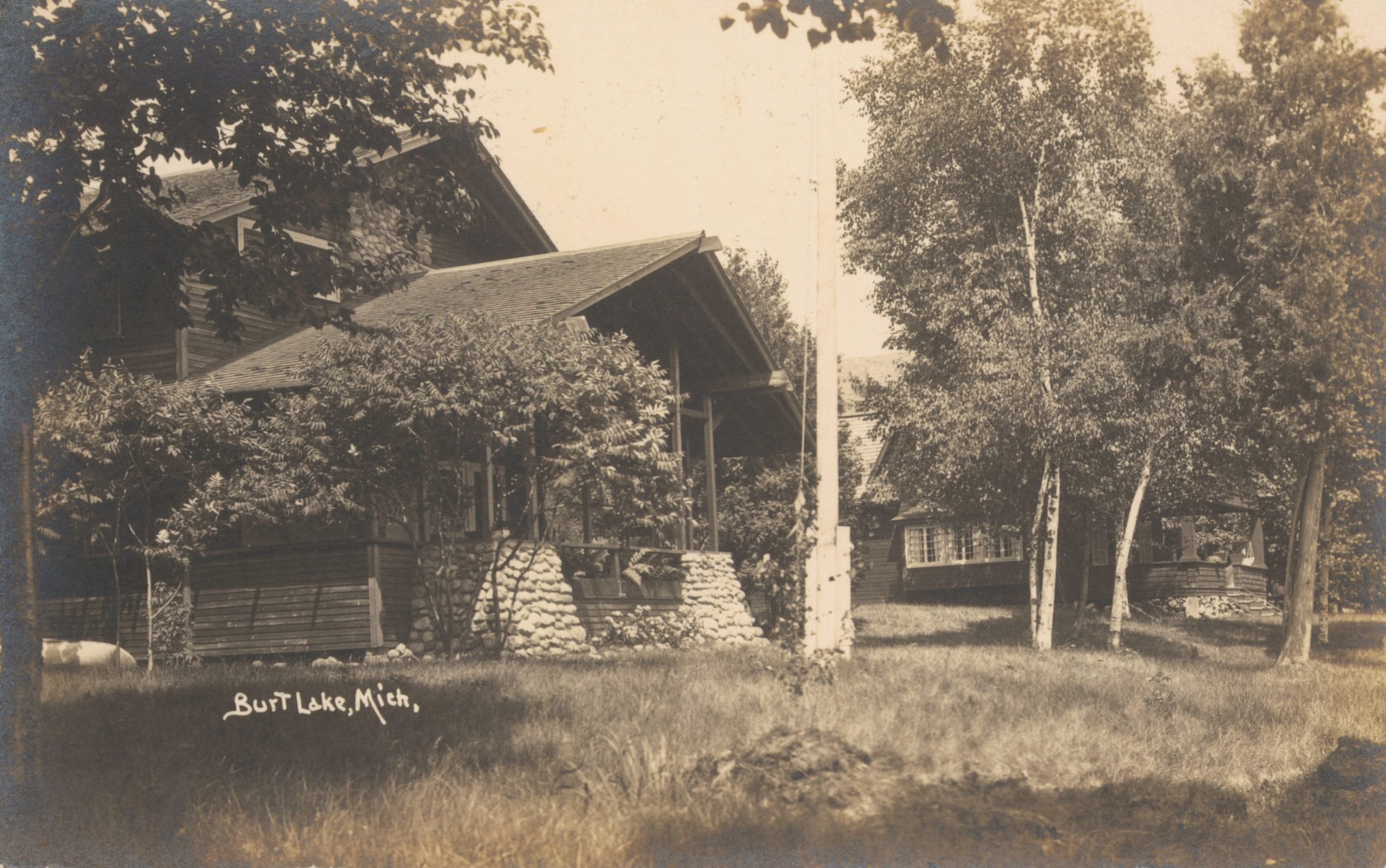 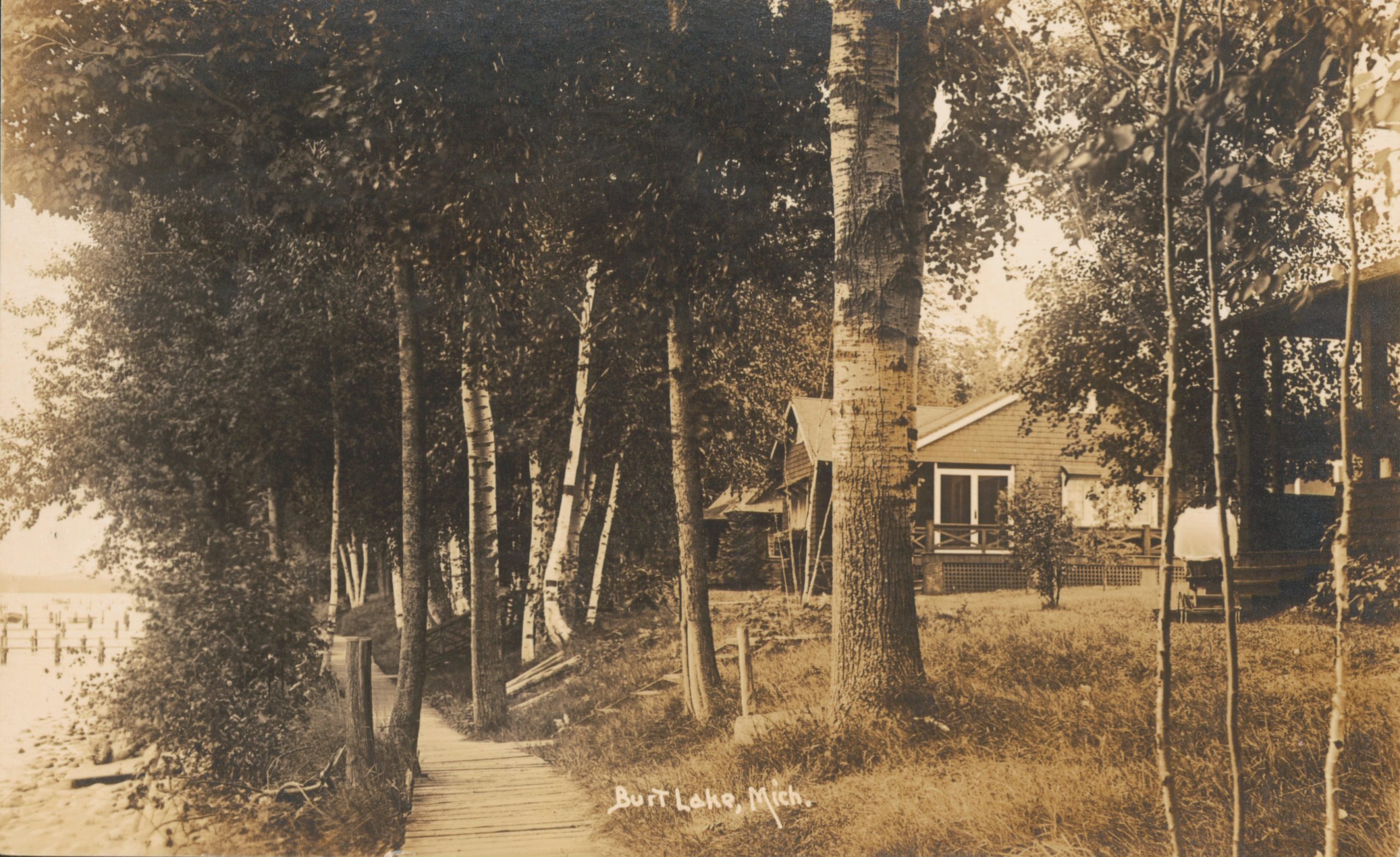 One such incident stands out in infamy in Northern Michigan: the Burt Lake Burnout. During the 1800s, Anishinaabe in Northern Michigan were buying their lands, out of fear they would lose them to settlers or forced removal to Kansas. The Burt Lake Ottawa and Chippewa bought over 300 acres and placed the title with the governor, but their lands would not be safe. In 1900, a Euro-American land speculator bought the land on back taxes. The Burt Lake Ottawa and Chippewa argued against this to no avail. On October 15, 1900, the speculator and the local sheriff proceeded to drive them away, burn down their homes and seize their land. Afterwards, the land was opened for non-Natives to purchase and build on, creating idyllic scenes of homes such as these.

While portraits of the Burt Lake Band and its removal are rare, photographs of lake homes, such as these postcards from the 1920s, and other landscape photography of the area gestures to why Natives were violently removed.