Home » Public Programs » Online Exhibits » “No, not even for a picture”: Re-examining the Native Midwest and Tribes’ Relations to the History of Photography » Myth Making

A Case Study on the Hiawatha Pageants

Indigenuity: A portmanteau coined by Curtis Kekahbah (Kaw Nation) and Daniel Wildcat (Muscogee Nation) that combines the terms indigenous and ingenuity. Indigenuity is a mode of problem solving that centers local indigenous knowledge and seeks to ensure the continuation of both indigenous knowing and doing.

Photographs are among many types of cultural artifacts created to support myths and stereotypes about Native Americans. Many of these cultural artifacts were paired together to enhance the perspective represented in a single medium. One powerful example of this is the Hiawatha pageants, commonly performed in Northern Michigan at the turn of the century.

The Song of Hiawatha, published in 1855 by Henry Wadsworth Longfellow, is a well known epic poem that romanticizes Ojibwe natives. Lauded by the American public for being a wholesome poem about “savages*,” Hiawatha romanticized a racist ideology, expanding the myth of the “Vanishing Race.” This concept is represented dramatically by the ‘Death Song’ at the conclusion of the poem, in which missionaries arrive on the shore and Hiawatha sails away into “the Land of the Hereafter.”

The visual nature of performances became a fundamental component of the poem’s continued popularity.

While it was widely read before the pageants, the visual nature of performances and photographs of the performances became a fundamental component of the poem’s continued popularity decade after decade.

Ojibwe Chief Buhkwujjenene is generally credited with telling ethnologist Henry Schoolcraft and his multiracial wife Jane Johnston the stories that would make their way into Longfellow’s The Song of Hiawatha. The first section of the poem credits these tales to Schoolcraft — not Buhkwujjenene — under the authenticating Native name ‘Nawadaha.’

Buhkwujjenene also travelled to England to fundraise for the religious mission in his community at Garden River, Sault Ste. Marie, Canada. A devout convert to Christianity, Buhkwujjenene reportedly enjoyed his time in England, where he retold the story of his conversion and faith. He distributed photos, such as these, to audiences during his tour.

Together these photos ask: What messages could Buhkwujjenene’s styling have conveyed to Europeans? What do these two images show about perceptions of Native Americans and “authenticity” to viewers? 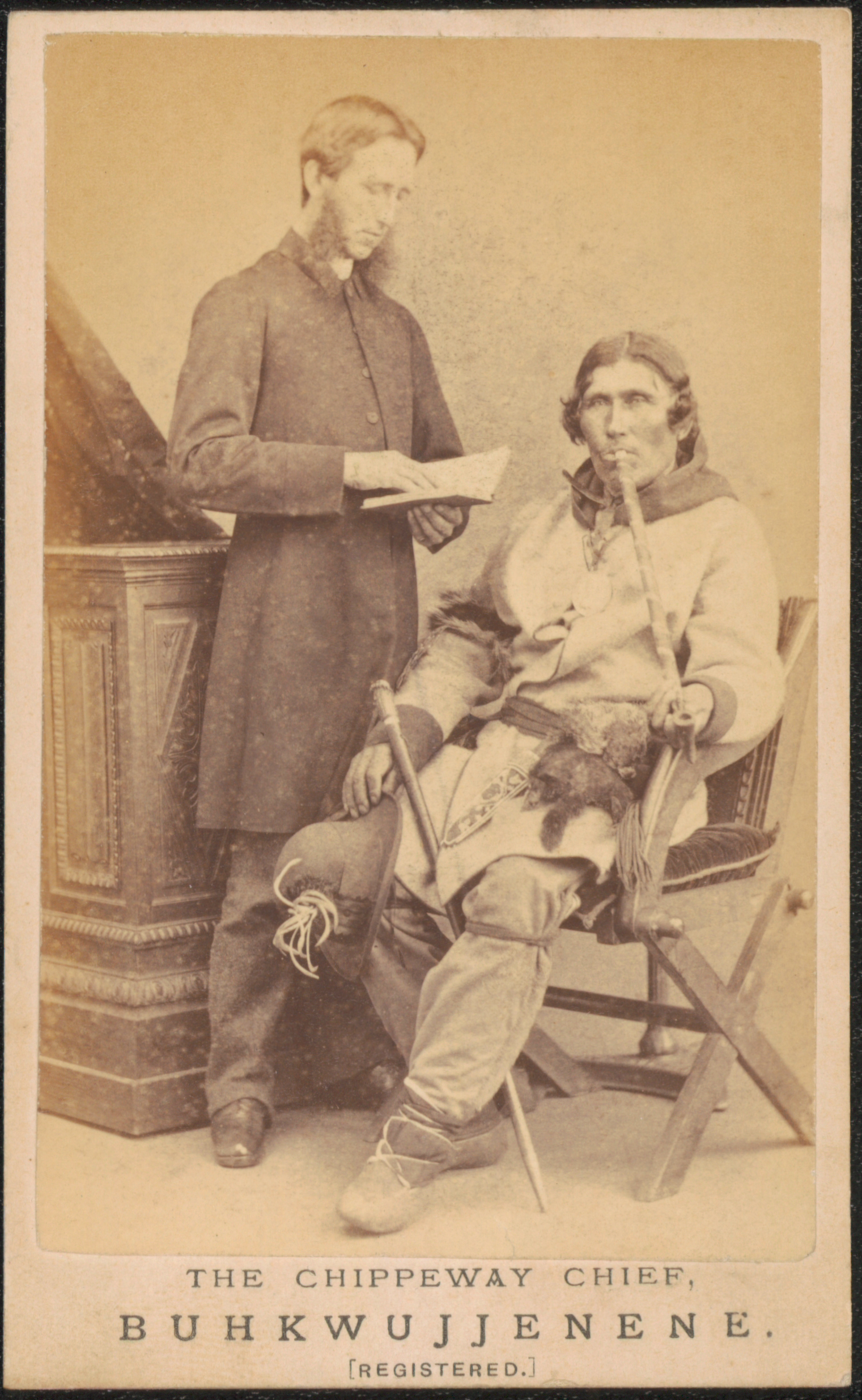 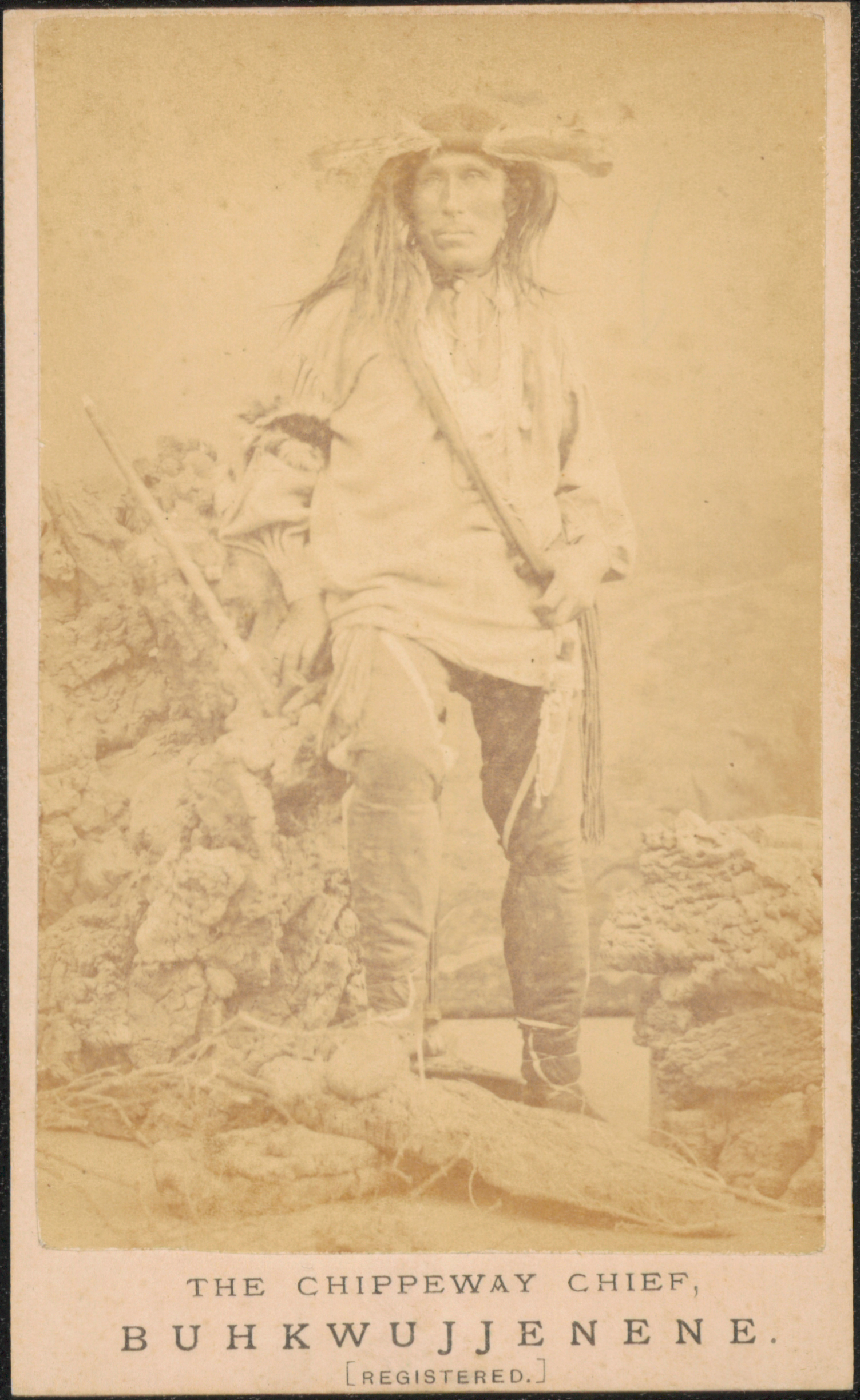 At the turn of the century, the Grand Rapids Railway brought a steady stream of tourists into the Petoskey region of Michigan and took over the production of the Hiawatha pageants.

The railway published this playbill in 1912, featuring the photographs of Grace Chandler Horn. As this example shows, the playbill integrates her photographs with the text, referencing the performances and making the poem more engaging for readers of all ages.

Much like Wild West Shows, these pageants presented a rare opportunity for Native persons to earn money while engaging with their cultures. Actors were encouraged to perform in their native language to increase “authenticity,’” an irony at a time in which many government policies were actively suppressing the same languages.

Eventually, some Odawa tribes reclaimed the pageants for tourism revenue and out of a pride in the new tradition of performance. However, pageants also continued within non-Native communities with many, if not all, of the Native roles played by non-Natives in redface. Performances of the poem in the midwest lasted well into the 2000s. 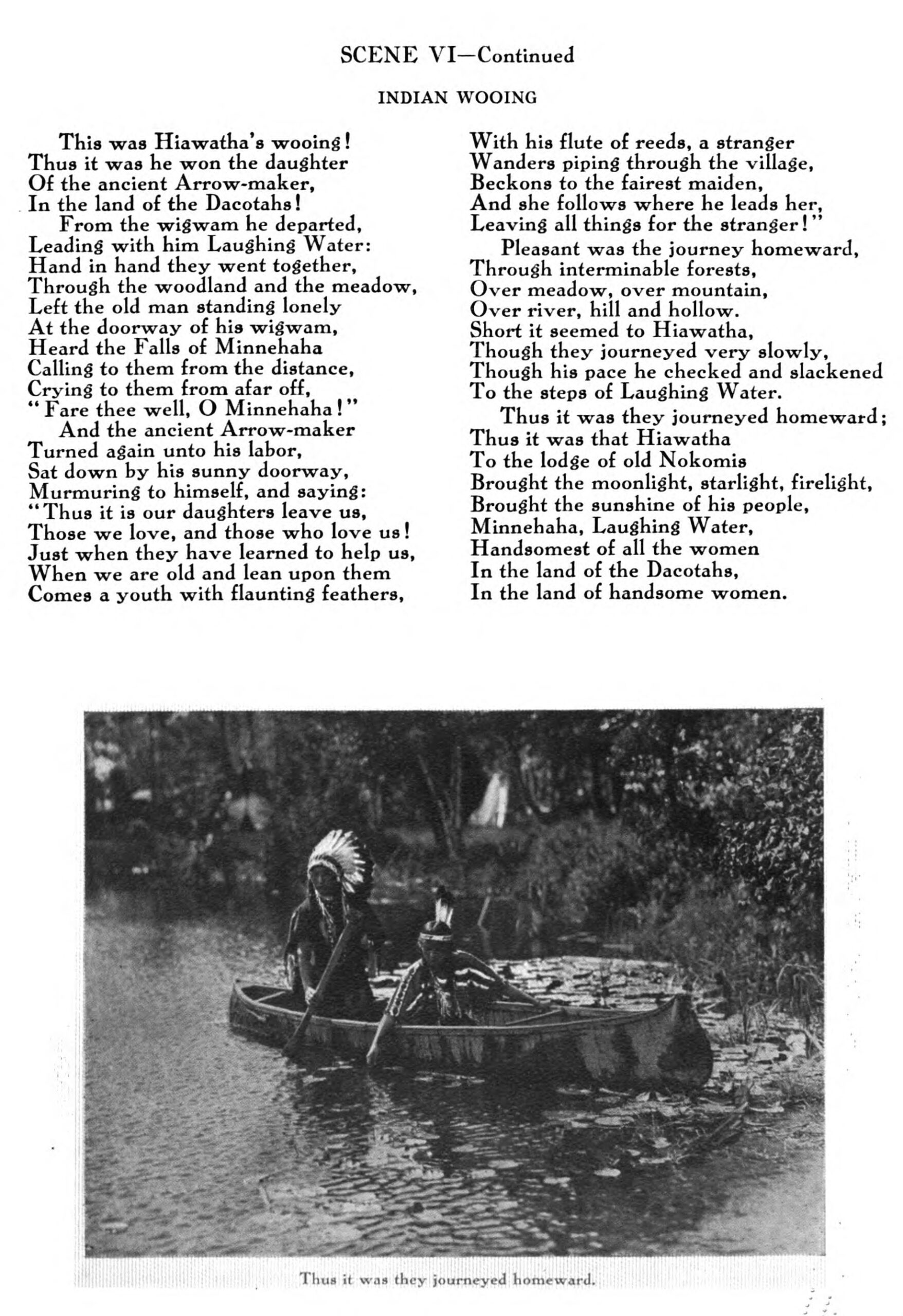 Grace Chandler Horn’s photographs of the local Hiawatha pageants were offered for sale in her photography shop in Petoskey. In keeping with expectations of what “authentic” Indians were widely believed to be, eagle feather headdresses of tribes from the Great Plains were mixed with local buckskins and bead-work.

This photograph shows a dramatization of first contact between the Natives and a European missionary. 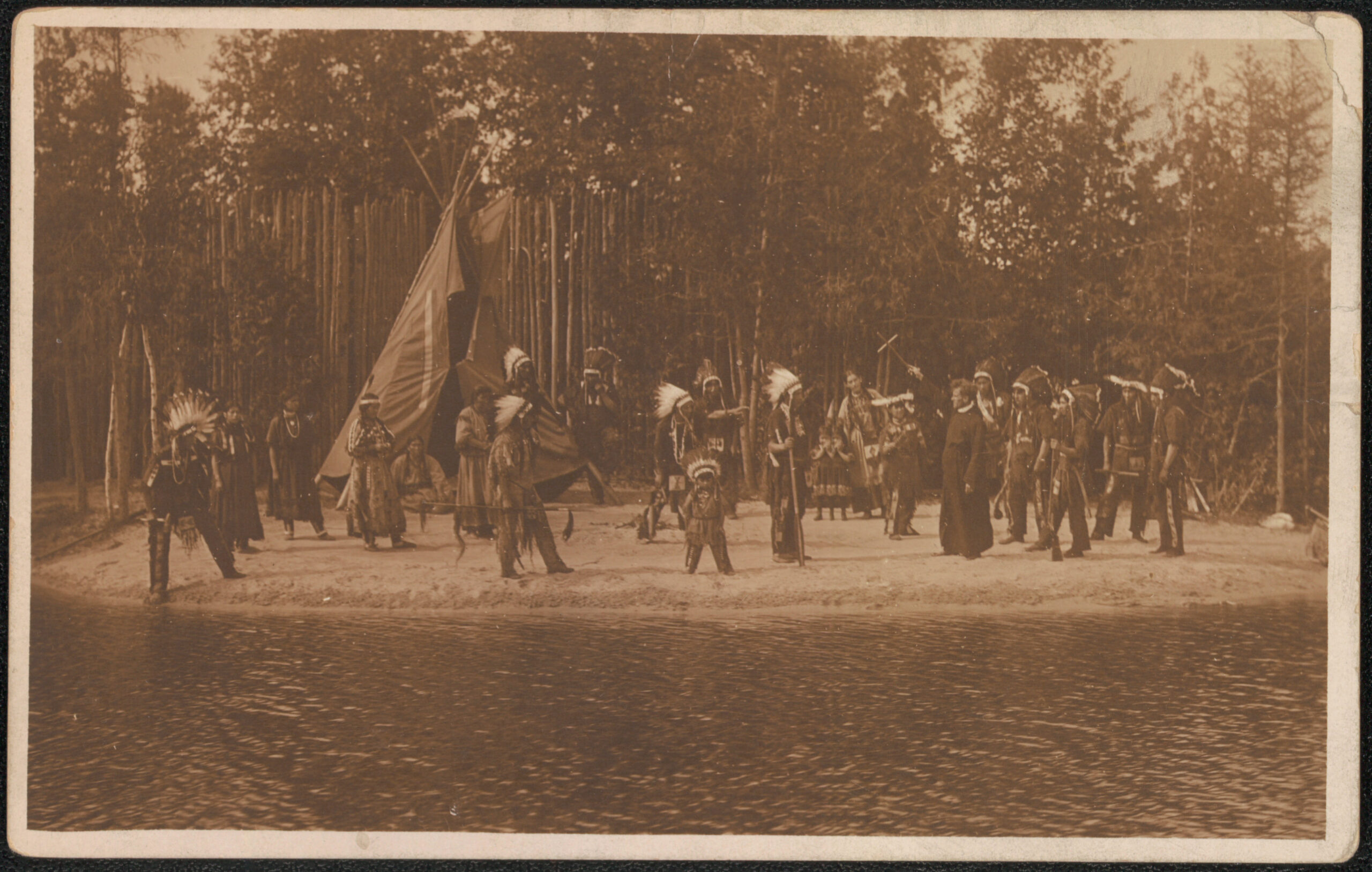