On the great plains of the American West amidst the tension between settlers and decimated tribal communities, one remarkable family represented a range of perspectives on the Native American experience. Connected both to old stock from New England and tribal chiefs from west of the Mississippi, the family included a U.S. Army artist and engineer enforcing Indian removal policies; an author both sympathetic and condescending as she recorded Native lore; and a Native American physician, who endorsed assimilation only to return to Native homelands just as the violence of the Indian Wars exploded in a horrendous final bloodbath. Each sought to record, reflect, educate, advocate, and understand on both a public and a deeply personal level what it meant to be Native American. The Clements Library is lucky to house photographs, original art, and published works relating to the Eastman family.

Seth Eastman (1808-1875) was a skilled artist and topographical engineer from Maine, educated at West Point. His legacy as an artist includes paintings of U.S. military sites on display at the United States Capitol as well as hundreds of illustrations for government publications and books by his second wife, Mary. Seth frequently sketched Native American subjects, scenes, and artifacts while stationed at Fort Snelling near what is now Minneapolis, Minnesota. At the time of his first arrival there in 1830, the region was the home of the Santee Dakota Sioux people.

Shortly after he arrived at Fort Snelling, Seth married a fifteen-year-old Native woman, Wakinajinwin (Stands Sacred, b. ca. 1815). She was the daughter of Mdewakanton Santee chief, Mahpiya Wicasta (Cloud Man, b. 1780), who was among the first of his people to shift towards an agricultural lifestyle and convert to Christianity. In the same year as her marriage to Eastman, Stands Sacred gave birth to a daughter named Winona (First Born Daughter, 1830-58). Winona also became known as Mary Nancy Eastman, and later as Wakantankawin (Holy, or Sacred Woman) following the Sioux tradition of changing and adapting names to reflect life’s events.

After three years, the U.S. Army reassigned Seth to West Point. He then declared his marriage ended, abandoning his young wife and child, although possibly leaving behind some means for their support. They could not have known that their paths would cross again.

In 1835, while stationed back at West Point, Seth Eastman married a second time, to Mary Henderson (1818-1887), daughter of a military surgeon. In 1841 Eastman was again assigned to Fort Snelling, this time for an extended tour of duty as commander. He thus returned to the haunts of his first family, bringing his new white wife. Together, Mary Henderson Eastman and Seth would have seven children, some of whom were born during their time in the West.

Fort Pembina, Dakota Territory, circa 1858. This evocative small watercolor by Seth Eastman shows the virtuosity that ranks him with the greatest artists of the American West. Situated on the northern border with Canada, Fort Pembina was a trading post going back into the 18th century. Eastman was in this vicinity in 1857-58, having been sent back to Fort Snelling to close down operations there.

At Fort Snelling, Mary and Seth Eastman found plenty of opportunities to deepen their fascination with Dakota culture and lore. Their first-hand experiences with the indigenous people of the West, along with Seth Eastman’s advanced artistic skills, would in later years situate him for the editing and illustrating of Henry Schoolcraft’s landmark government report Historical and Statistical Information respecting the History, Condition, and Prospects of the Indian Tribes of the United States (1851).

Mary, an assertive and inquisitive woman, drew the attention of tribal elders around Fort Snelling, who eventually began to share their stories and legends. These became the basis of several publications by Mary, among them Dahcotah, or Life And Legends Of The Sioux Around Fort Snelling (1849); and Romance of Indian Life: With Other Tales, Selections from the Iris, An Illuminated Souvenir (1853); both of which featured color lithograph illustrations based on her husband’s artwork.

The written works of Mary Eastman have long been considered sympathetic portrayals of Sioux culture. However, by 21st-century standards, they represent a condescending point of view, blurring romantic notions of chivalry and valor together with the very different Native perspective. Sentimentality overwhelms truth, and the veracity of the narrative becomes questionable. Themes of loss, romance, cruelty, jealousy, and vengeance dominate the lives in her stories.

It is not clear at which point Seth Eastman and Stands Sacred’s daughter Winona took the name Wakantankawin (Holy, or Sacred Woman). In 1847, she married Ite Wakandi Ota (Many Lightnings, 1809-1875), who descended from Wahpeton Santee Dakota chiefs. As evidence of familial bonds among this community, the Eastman name was adopted by Many Lightnings and his children after Sacred Woman’s death during the birth of a son in 1858.

Sacred Woman and Many Lightnings’ son Hakada (The Pitiful Last) was destined for an odyssey across lands and cultures. His shifting and self-invented identity would bring new names. His first references the death of his mother during childbirth. At age four, his tribal band won an important lacrosse game and gave him the name Ohiyesa (The Winner). And yet another designation was to come. 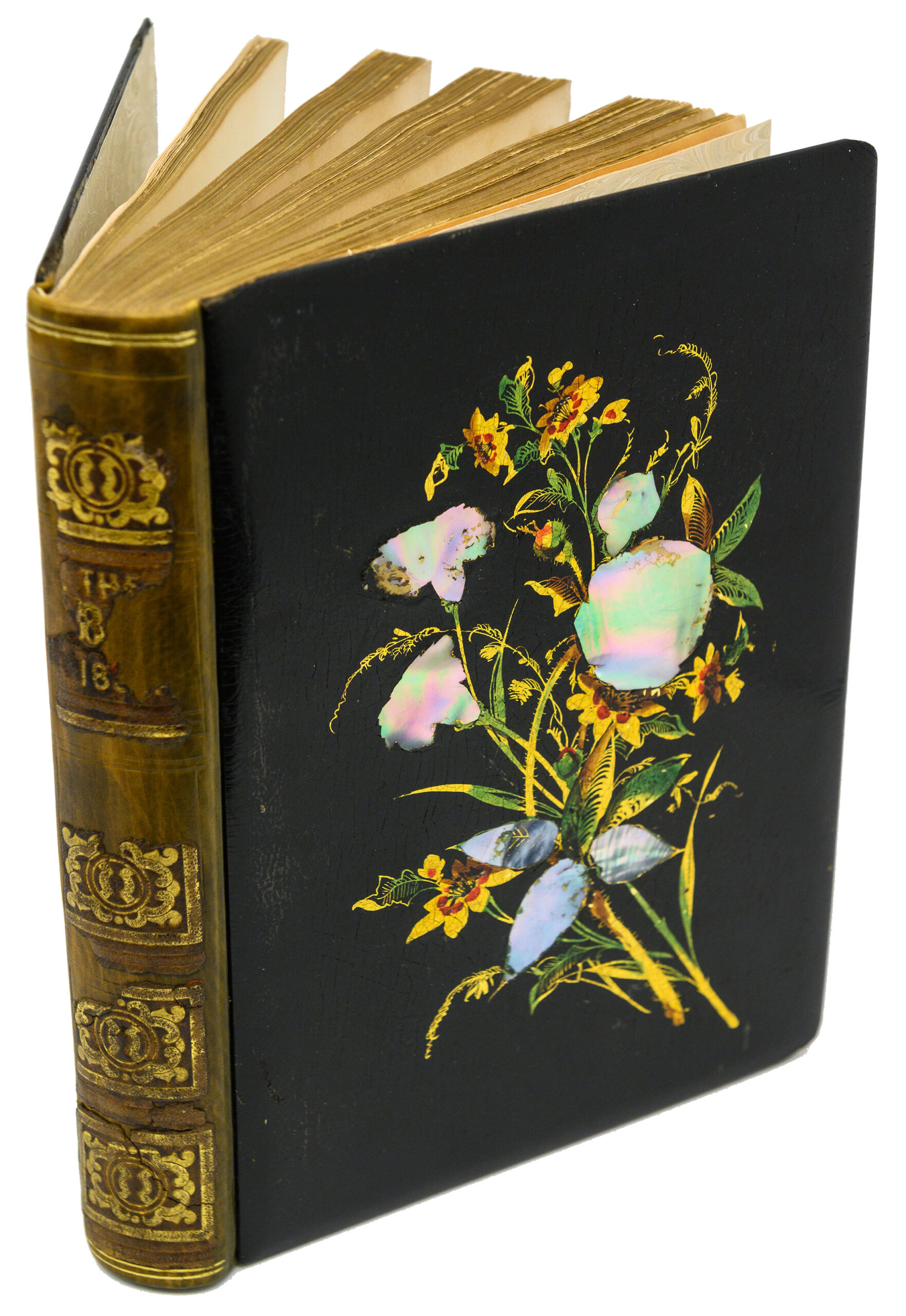 The Iris, a Binghamton, New York, newspaper, was an occasional publisher of Mary Eastman’s stories. Eastman’s own copy of this souvenir edition of selections from the Iris (1852) has been re-bound in leather, hand-painted, and inlaid with mother-of-pearl.

Ohyiesa’s father, Many Lightnings, embraced assimilation, converted to Christianity, and changed his name to Jacob Eastman. He determined to steer Ohiyesa on a path away from confrontation and toward assimilation. This achieved, Ohiyesa chose the name Charles Alexander Eastman and began an academic career through numerous missionary programs, Indian boarding schools, and colleges, eventually graduating from Dartmouth in 1887. He then entered Boston University, earning a medical degree.

By November 1890, Dr. Charles Eastman had returned to the West as a medical officer at the Pine Ridge Indian Agency in present day South Dakota. At Pine Ridge tensions between the U.S. Army and desperate Lakota followers of the Ghost Dance movement were reaching the point of violence. On December 29, 1890, the Seventh Cavalry (the unit formerly led by George Armstrong Custer) massacred a Miniconjou band of men, women, children, and the infirm at Wounded Knee Creek. Eastman was on the scene, scrambling to provide care for the wounded and traumatized survivors scattered across the frozen prairie. 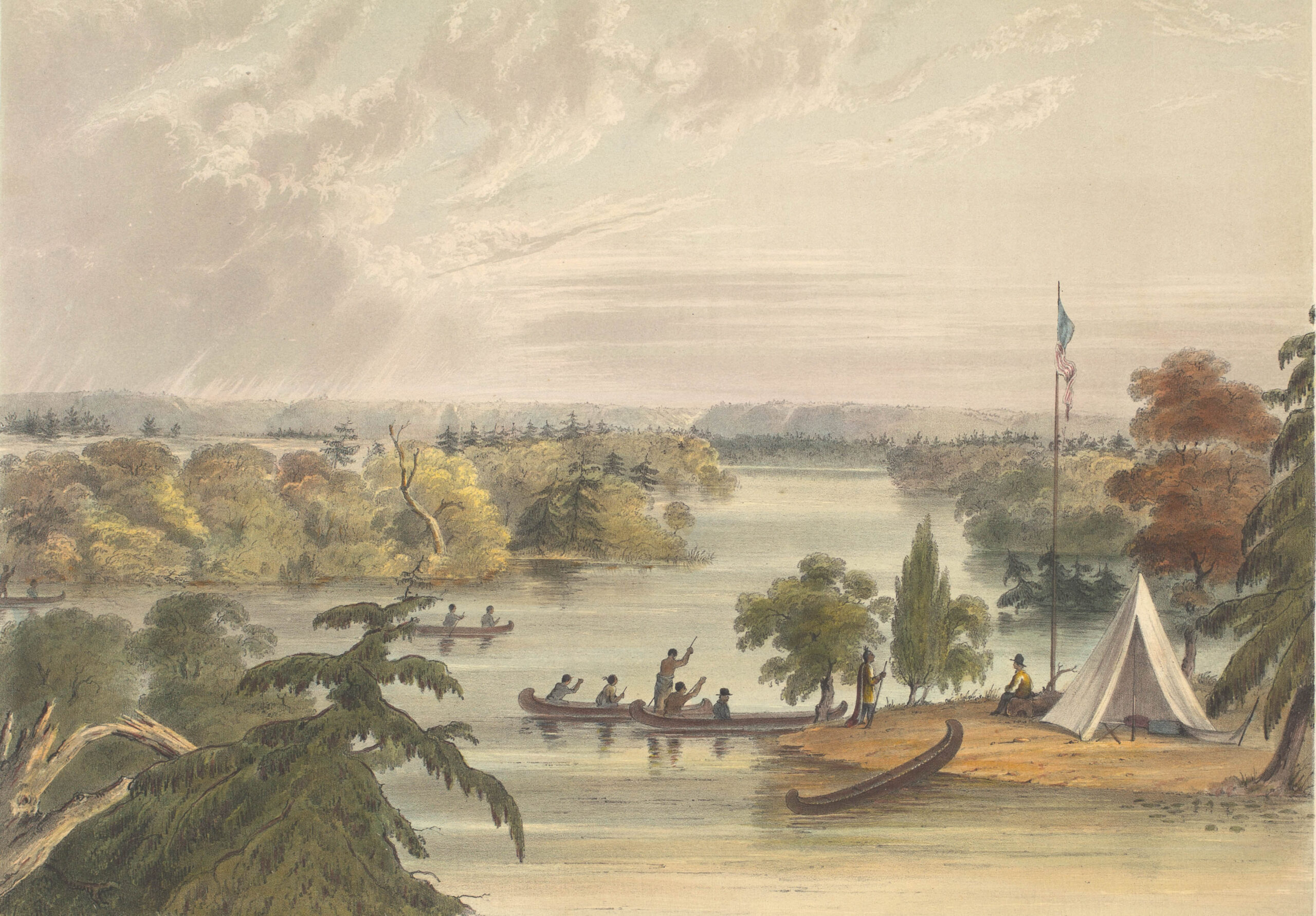 Seth Eastman’s artwork, including “Itasca Lake” (circa 1851), illustrated the publications of Henry Rowe Schoolcraft as well as those of Mary Eastman. Henry Wadsworth Longfellow drew heavily on Schoolcraft’s, and likely Eastman’s, work in imagining scenes for another Native American Romance, The Song of Hiawatha (1855).

Disillusionment and revulsion pushed Dr. Charles Eastman to New York, where he married New England educator Elaine Goodale (1863-1953) in 1891. For the next 20 years Eastman held various positions with the federal government, the Carlisle Indian Boarding School, and numerous other organizations that advanced understanding of Indian cultures. He promoted the YMCA and Boy Scouts of America on western reservations, collected artifacts for the University of Pennsylvania, and wrote and lectured on Native American conditions, becoming one of the most prolific authors and speakers on Sioux ethno-history and American Indian affairs.

Frustration followed achievement throughout Dr. Charles Eastman’s career. His descriptions of the aftermath of Wounded Knee and the effect it had on him made clear that he was questioning “the Christian love and lofty ideals of the white man.” He found that he was an outsider in both worlds ‒ not militant enough for many Native Americans angered by harsh assimilation programs, but far too “Indian” for many of his white colleagues. He endured dismissive criticism. The Springfield Republican commented that his personal experiences offered “little social or educational value.” His efforts to establish a medical career in Minneapolis were frustrated by expectations that he could also prescribe a magical “Indian medicine.” 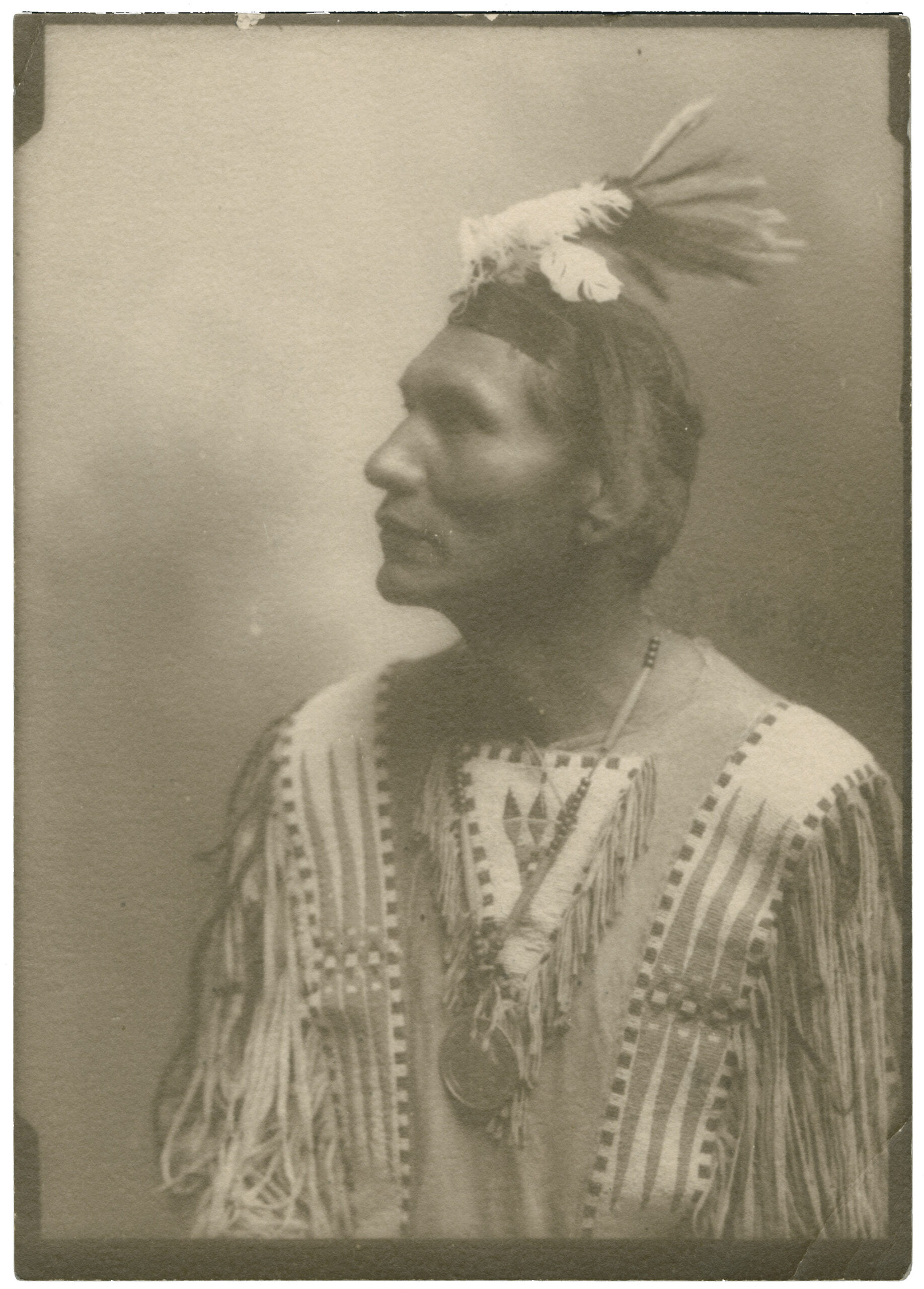 In the Petoskey, Michigan, region Charles Eastman crossed paths with Grace Chandler Horn (1879-1967), a talented artistic photographer who sold photos of the local Odawa and Ojibwe residents to tourists. Although her staged photographs sometimes misrepresent her Native subjects, her work is aesthetically beautiful (evidenced by this photograph of Charles Eastman, ca. 1920) and in step with the important Photo-Secessionist style of the day.

As he sought ways to reconnect to the values of his indigenous upbringing, he found his way north, back to the traditional Santee homelands of Minnesota and into Ojibwe and Odawa territories. In the 1920s and 1930s Eastman was frequently back and forth between the Lake Huron shore and the Detroit area, where his son Ohiyesa II lived. In From the Deep Woods to Civilization (1916) a revitalized Eastman commented that “Every day it became harder for me to leave the woods.”

Ohiyesa, Dr. Charles Alexander Eastman, died in 1939 of complications from smoke inhalation from a tepee fire. He is buried at Evergreen Cemetery in Detroit. He had witnessed the peak of violence between Native American peoples and the United States, experienced both the timeless traditional lifestyle of Plains Indians, and assimilated into 20th century white society. His perspective across two worlds remains relevant in our current multi-cultural society, challenged by issues of race and sustainability.

Although Charles probably never crossed paths with his grandfather, Seth Eastman, the combined experiences and historical record left by Charles, Mary, and Seth Eastman cover a remarkable portion of the complicated and fraught relations between indigenous Americans and others.