With Kevin Graffagnino’s retirement, long-time Clements Library Associates Board member Clarence Wolf has commented that it is, “the end of the era of the bookman.” It is fitting then that for his final exhibit and Quarto, Kevin focused on books. In fact, many Clements Library Associates have enjoyed calling Kevin over the years just to share in the “mad-dog” spirit of collecting.

For many of us, the title “Best of the West” may evoke an image of the classic western movies of the 20th century. Our collective socialization toward these stereotypes actually illustrates how important the Clements Library is for telling the stories of all people. My father, a member of the Saginaw Chippewa Tribe, once told me that as a child he loved playing “cowboys and indians.” When I asked him which role he played, he said, “the cowboy ‒ because he is the hero.”

As we continue to fill the gaps in our collections to tell a more complete story of the people of America, we are pleased to announce the availability of the Richard Pohrt Jr. Collection of Native American Photography. The acquisition was made possible through the generosity of Tyler J. and Megan L. Duncan of Minnesota and Richard Pohrt Jr. of Michigan. Processing and cataloging was funded by both the Gladys Krieble Delmas Foundation of New York and the Frederick S. Upton Foundation of Michigan. You can read more about this acquisition at http://myumi.ch/dOddj.  Our work with this collection will continue as we utilize funding from the Upton Foundation to create a traveling exhibit allowing more people to learn about these historic materials.

As we transition to the leadership of the next Director, I look forward to more collaborative, innovative, and monumental projects. These big ideas are only possible with the support of people like you. We need your enthusiasm for what we do and your financial contributions. I am always happy to grab a cup of coffee and dream with you about what we can accomplish together at the Clements Library! 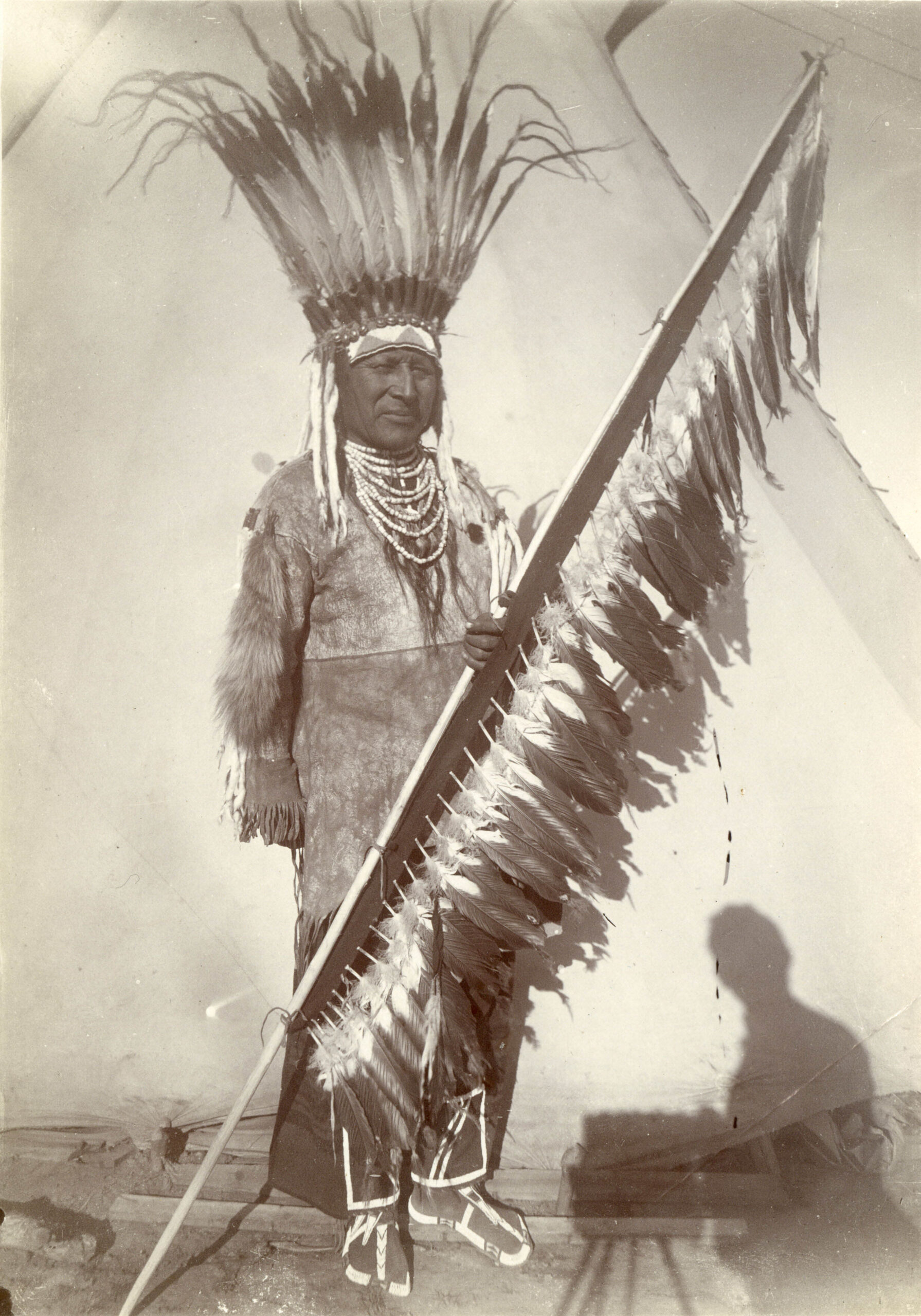 White Swan, one of six Crow scouts who served the United States under General Custer during the Battle of the Little Bighorn. Note the shadow of photographer Fred E. Miller and his camera in the foreground.

One big project the staff is working on is an ambitious set of new digitization goals. Our ability to present all the heroes, villains, and everyday people to a broader audience enhances the possibilities for new insights and better connections. A first step towards expanding our digital resources was a complete overhaul of the Clements Library website. Please check out the new offerings at clements.umich.edu.

We are delighted to have Director Paul Erickson on board. He and I will be traveling the country during the next few months, because we can’t wait to include you in our plans for the future of the Clements Library and to hear your ideas. If you would be willing to host a small gathering, please contact me at angmo@umich.edu. 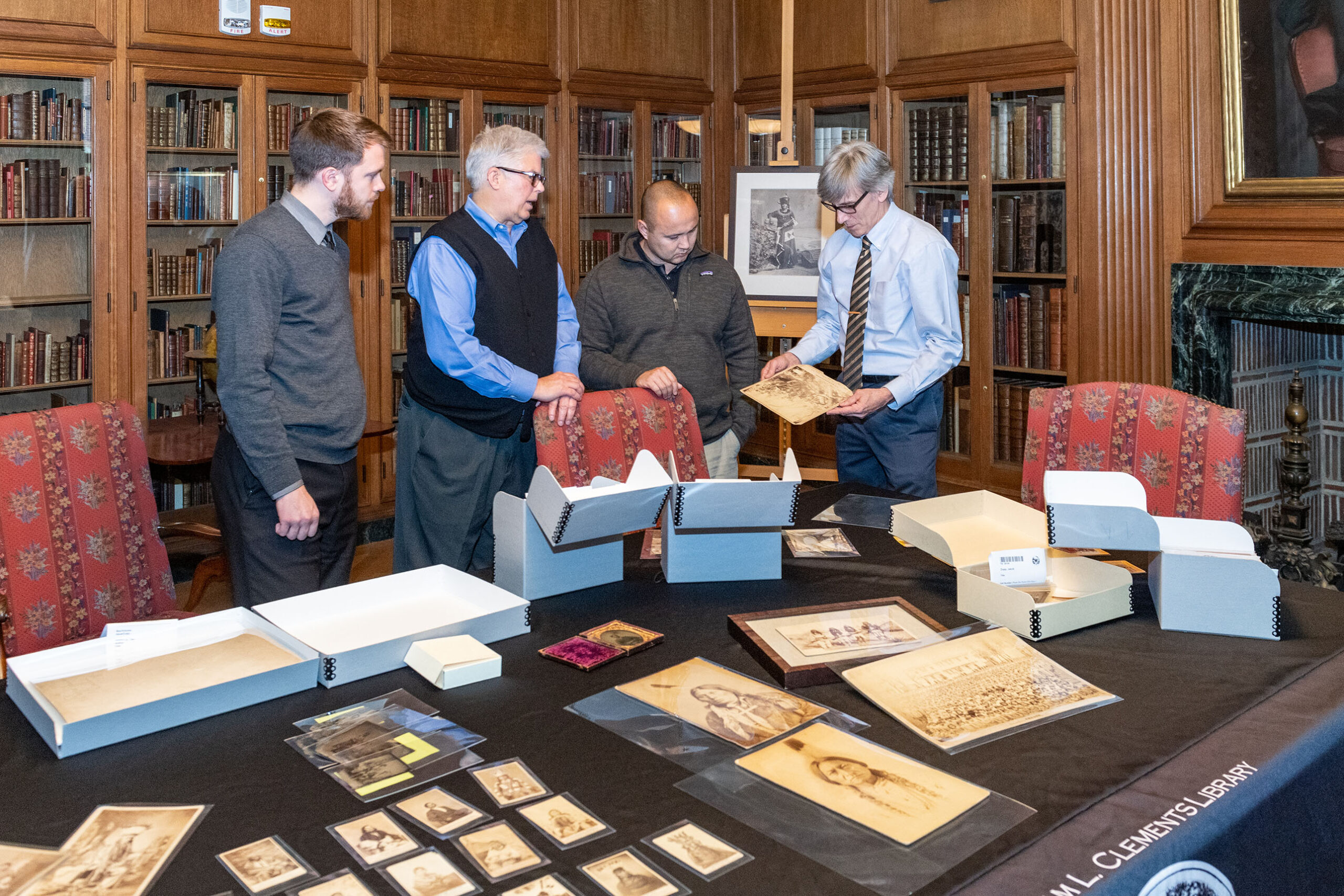 Examining the Richard Pohrt Jr. Collection of Native American Photography, (L-R) Cataloger Jakob Dopp, CLA Board Member/Collector Richard Pohrt, Eric Hemenway and Graphics Curator Clayton Lewis. Hemenway, director of archives and records for the Little Traverse Bay Bands of Odawa Indians, was one of the consultants from indigenous communities that were sought out to advise the Clements Library. 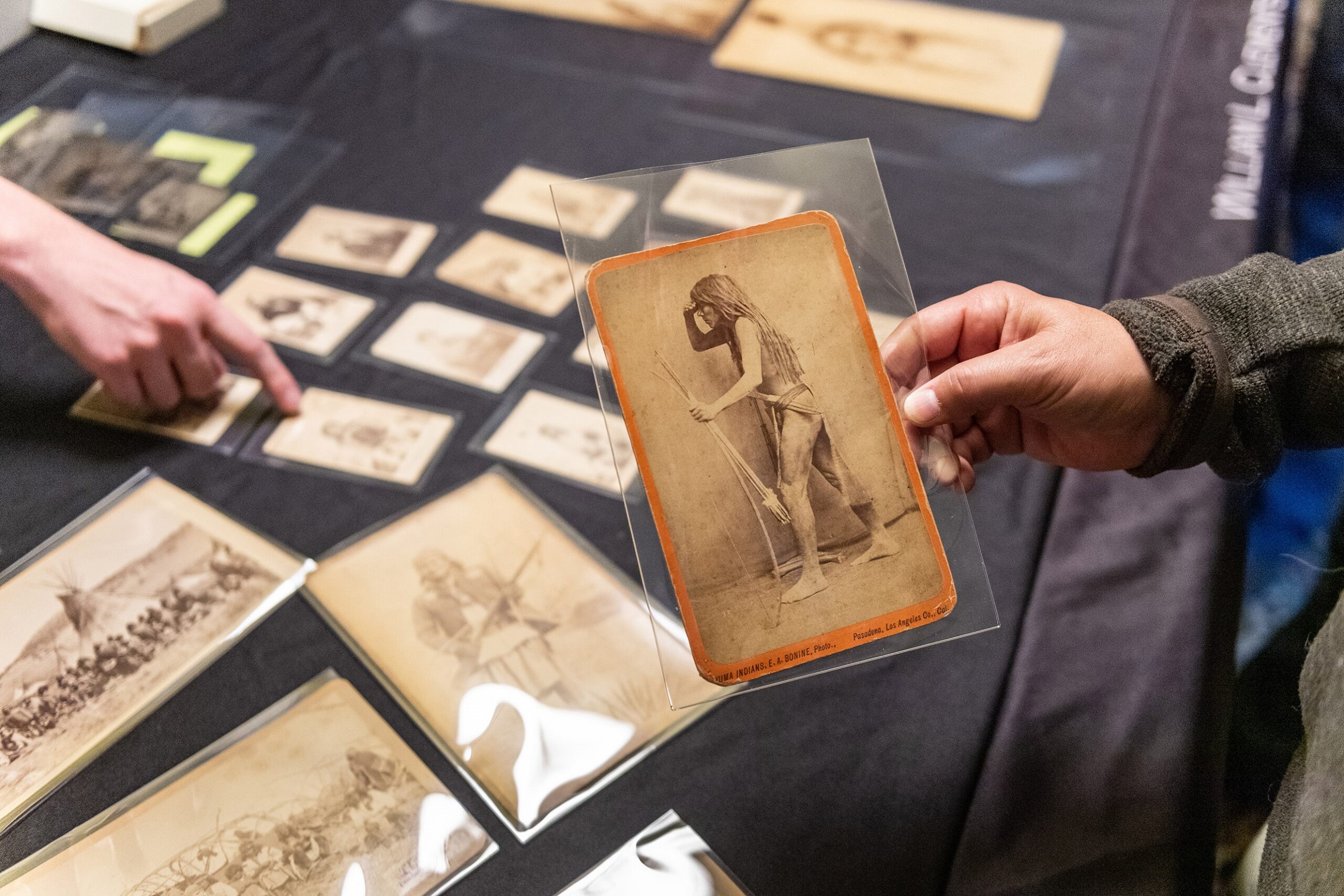 A photograph by Elias A. Bonine of an unidentified Yuma man with a traditional breechcloth and hairstyle, holding bow and arrows, ca. 1880s. Photos by Scott Soderberg/Michigan Photography.