“I dread it more than tongue can tell”

On June 14, 1864, after a week’s journey amid miles of prickly pear and vast plains, Nathaniel P. Hill (1832-1900) sat down and wrote a letter to his wife. Hill was a former Brown University chemistry professor hoping to make his fortune smelting precious metals in the Colorado Territory while his wife, Alice Hale Hill (1840-1908), remained in Providence, Rhode Island, with their two young children, Crawford and Isabel.

The Hill family’s experience of “going West” was not the narrative typically associated with American western expansion. They did not pack their worldly goods into a covered wagon bound for a homestead claim. Nathaniel Hill was not a miner or railroad worker laboring to forge a fortune from the dirt. Instead, the Hills were an affluent middle-class family from Providence who transplanted their lifestyle from Rhode Island to Colorado following several years of Nathaniel Hill’s business ventures there. Despite the misgivings of his wife, Alice, Hill’s East Coast capital was key to establishing a comfortable standard of living for himself and his family, one that far exceeded his wife’s initial fears. With his scientific education, business connections, and stable financial backing, Nathaniel Hill was in an optimal position to invest in land and innovative technical processes to turn a profit in an industry that destroyed so many dreams. He ultimately succeeded in founding a highly lucrative smelting company and held various public offices in the territory and later state.

While Nathaniel Hill’s early time in Colorado was far from luxurious ‒ reliable travel within the territory was often only by horseback, diet was comprised of meat and eggs, and accommodations were rustic whether in a building or camping in the open with the mosquitos’ “best representatives” ‒ these were temporary inconveniences. Descriptions in his letters back home of his experiences and the people he met reflected the perspective of a well-off outsider. Hill traveled via railroad, stagecoach, and horseback on his initial journey. During the Nebraska leg of the trip, he and his travel companions encountered several of the vast wagon trains streaming across the territory. As he noted in a letter to Alice, many of the emigrants were fleeing Civil War- inspired guerilla actions in states such as Arkansas for destinations to be decided upon reaching the mountain passes. 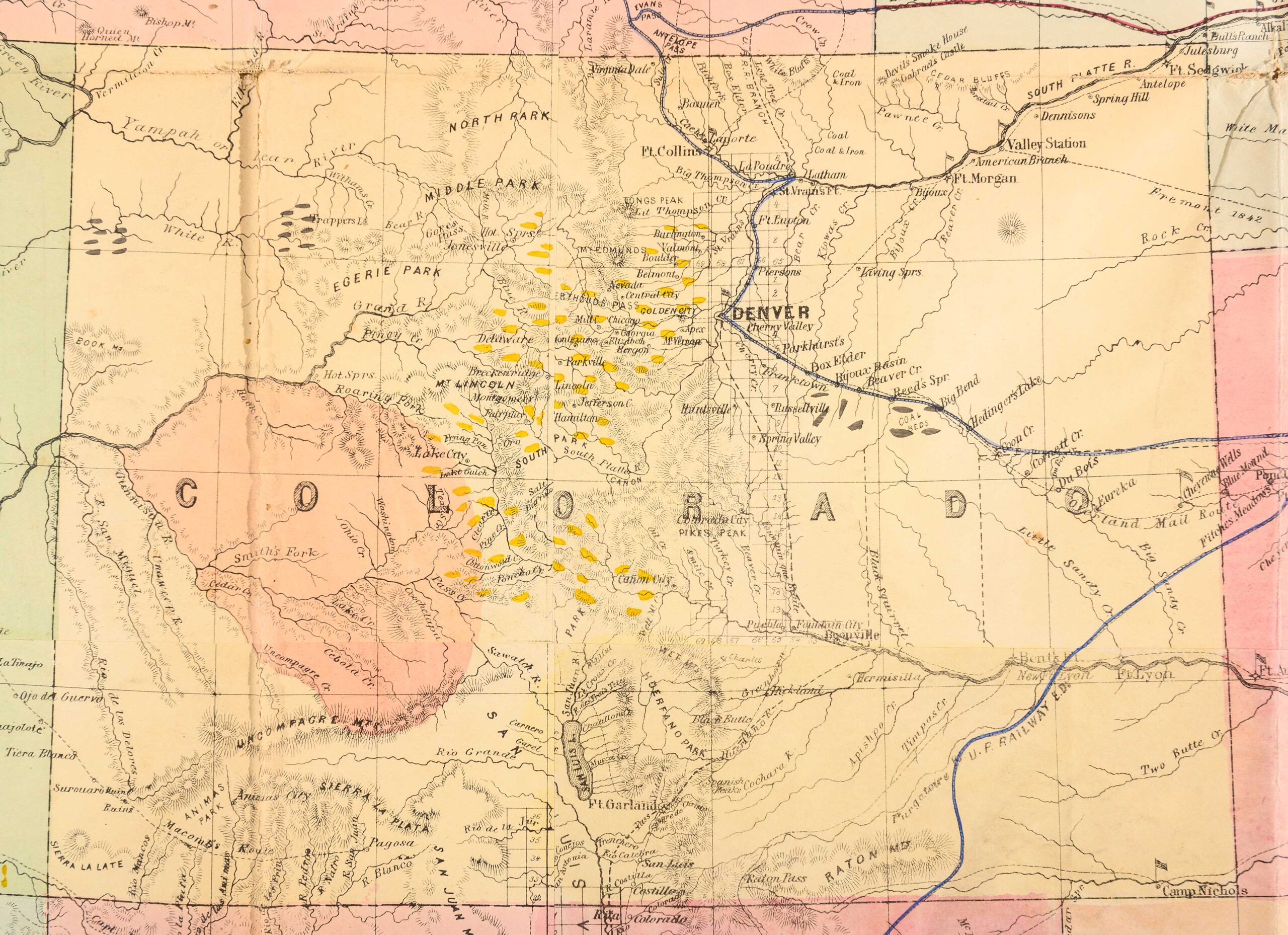 William Keeler’s 1867 National Map of the Territory of the United States included a compilation of data from many governmental sources and was color coded to show the locations of gold, silver, copper, quicksilver, iron, and coal. The yellow markings on this detail of Colorado indicate gold deposits. Keeler’s map has been described as the largest and finest map of the West as it was then known, particularly for its depiction of the post-Civil War railroad system. The map was also issued in a folding pocket-sized edition in 1868. The Clements copy of the smaller map was carried West by a railway contractor and was present in his pocket at the driving of the Golden Spike establishing the transcontinental railroad.

It was stories such as these that fueled the public’s imagination of the “frontier.” Such accounts made their way into newspapers and magazines and subsequently shaped the perceptions of Alice Hill. Separated from her husband by a vast distance, Alice’s knowledge of Colorado was based on published reports and Nathaniel’s firsthand observations. Her mind was preoccupied by the dangers of Native American attacks as touted in newsprint and Nathaniel’s “wild way of living” (though by the time the letter was written where she lamented this fact, Nathaniel had employed a servant). His early letters and information passed on by other acquaintances had a strong influence on her perceptions of life out West. In an October 13, 1867, letter Alice wrote to Nathaniel of the preparations she planned for the family’s eventual move to reunite with him. Much of the letter was devoted to her supply lists and conjecturing about what items would be unavailable in Colorado and how to transport their possessions. Of her everyday purchases, she made particular note of sewing supplies (buttons, elastic, and whalebones) and nonperishable food (corn starch, tapioca, hops, and foreign pickles) to purchase before they left as they would store well and alleviate the need to purchase at exorbitant prices out West. While many families stocked up before moving cross-country, the fact that Alice Hill confidently recommended purchasing multi-year quantities of a variety of food stuffs and dry goods along with her envisioned means of transportation (renting a car, likely a railroad car?) indicated that the Hill family sought as little disruption from their previous mode of life as possible and had the means to make it so.

These logistical details were only part of Alice’s concerns about moving. Leaving family, friends, and the city she had lived in for most of her life would have been extremely difficult in any scenario. The fact that the family was not only completely uprooting but that they were doing so to a remote and largely unsettled region presented a considerable challenge. “I dread it more than tongue can tell,” Alice wrote to her husband, “Of course, only for your sake is the sacrifice possible. To think of exiling ourselves for a long time is dreadful to me. In five years we shall be forgotten by most of our friends here, who are now so dear to me. I don’t think I shall like the people in Col. & I am sure of being a domestic drudge.” This letter in particular, written as the time for the family to join Nathaniel grew ever closer, expressed a litany of Alice’s apprehensions. The correspondence from this period does not include Nathaniel’s replies which Alice referenced. It appears though that his information regarding the living situation in Colorado was inadequate at best. “I am about discouraged by the lack of any real information in any of your letters” she wrote as she pressed for word of their future home, “You can surely tell me as much as this ‒ Is there a house of six or eight rooms where we can live, or shall it be in two?” It seems that Alice Hill was unsure which scenario would be her fate ‒ a smaller scale version of her current home or a frontier hovel more akin to those of the public imagination. 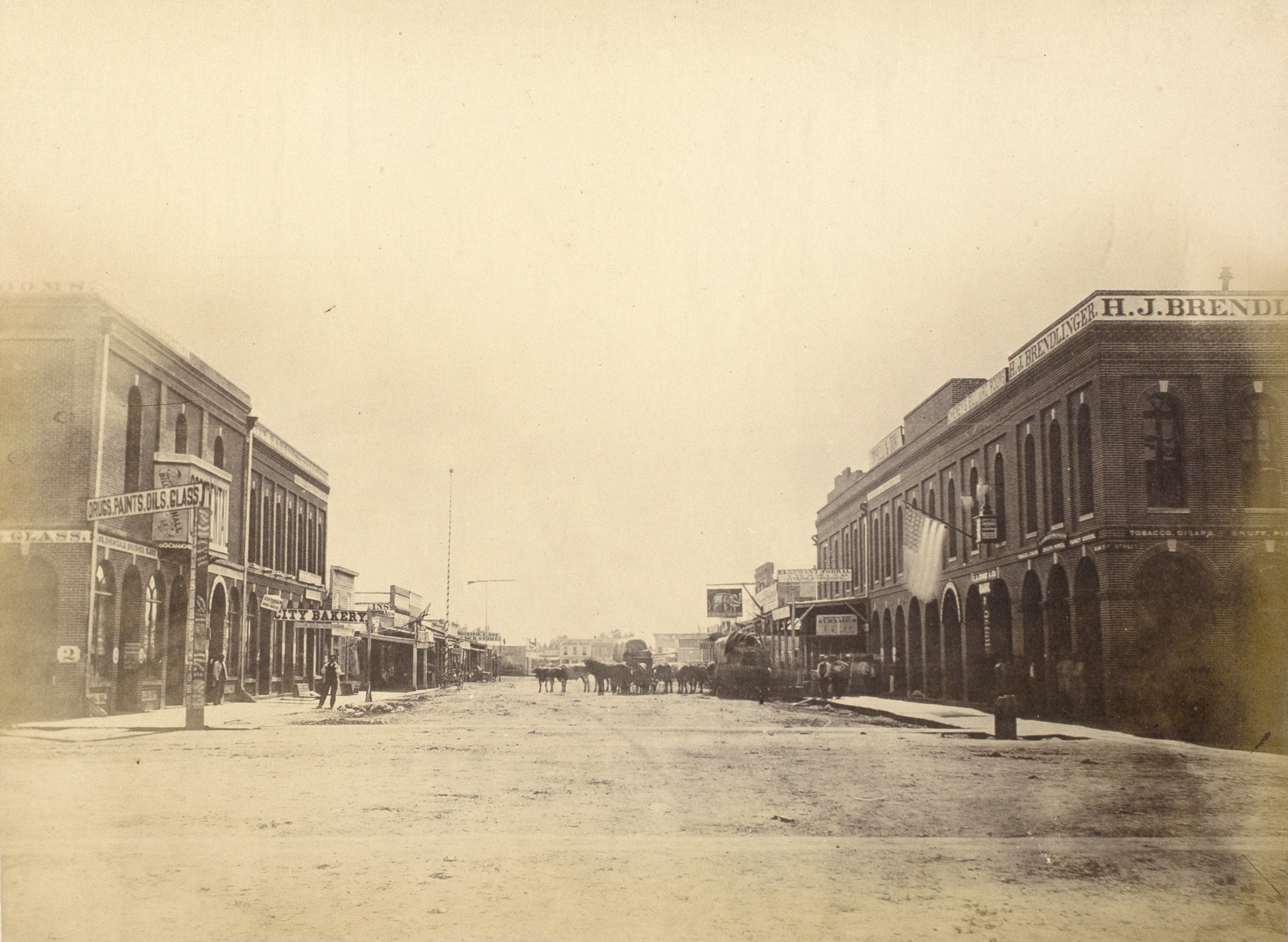 Denver sprang up in the late 1850s in response to the discovery of gold at the base of the Rocky Mountains. The supply of gold proved limited, but the determination and ambition of early settlers ensured that Denver would avoid the fate of many a boomtown when the mines ran out. Downtown Denver was largely destroyed by fire in 1863, but had been re-built by the time this photograph was taken ca. 1869.

Uncertainty did not sit well with her, especially as she attempted to reconcile her current way of life to the anticipated one in Colorado. As she was unable to find someone in Providence to provide housekeeping in Colorado, she feared her days out West would be filled with menial housework. “All the hardship of housekeeping comes on the woman.  She is responsible ‒ I know the husband furnishes money, but that is an easy matter compared to washing, ironing, cooking, washing dishes, pots & pans all smoked up by pine wood, sweeping, dusting, sewing, mending & yet all the time look neat.” Alice was keenly aware of the often underappreciated labor required to keep a household running efficiently. As the acting head of household in Nathaniel’s absence, she managed a home (with staff assistance), parented their two children, and handled business affairs for Nathaniel in his stead. The autonomy with which Alice acted on household and financial matters was indicative of a deep trust between the two partners. She kept him apprised of her actions and at times sought advice, but it is evident she made decisions with a fair degree of independence and the candor in her letters to Nathaniel further evidenced a close partnership.

In contrast with many less affluent families, this close relationship combined with sufficient resources gave the Hills the option to remain separated with Alice and the children remaining in Providence and Nathaniel running the Colorado business. Alice may well have chosen to continue such an arrangement if it were not for her deep love for her husband. Time and again, Nathaniel and Alice noted the pain of the other’s absence and their yearning to be reunited. While Alice voiced her many reservations about moving West, she was willing to pay the price. “I am most heartily tired & sick of living away from you, & will pleasantly agree to most anything which will bring us again constantly with each other.” She parted with everything she knew and loved in order to be with him. 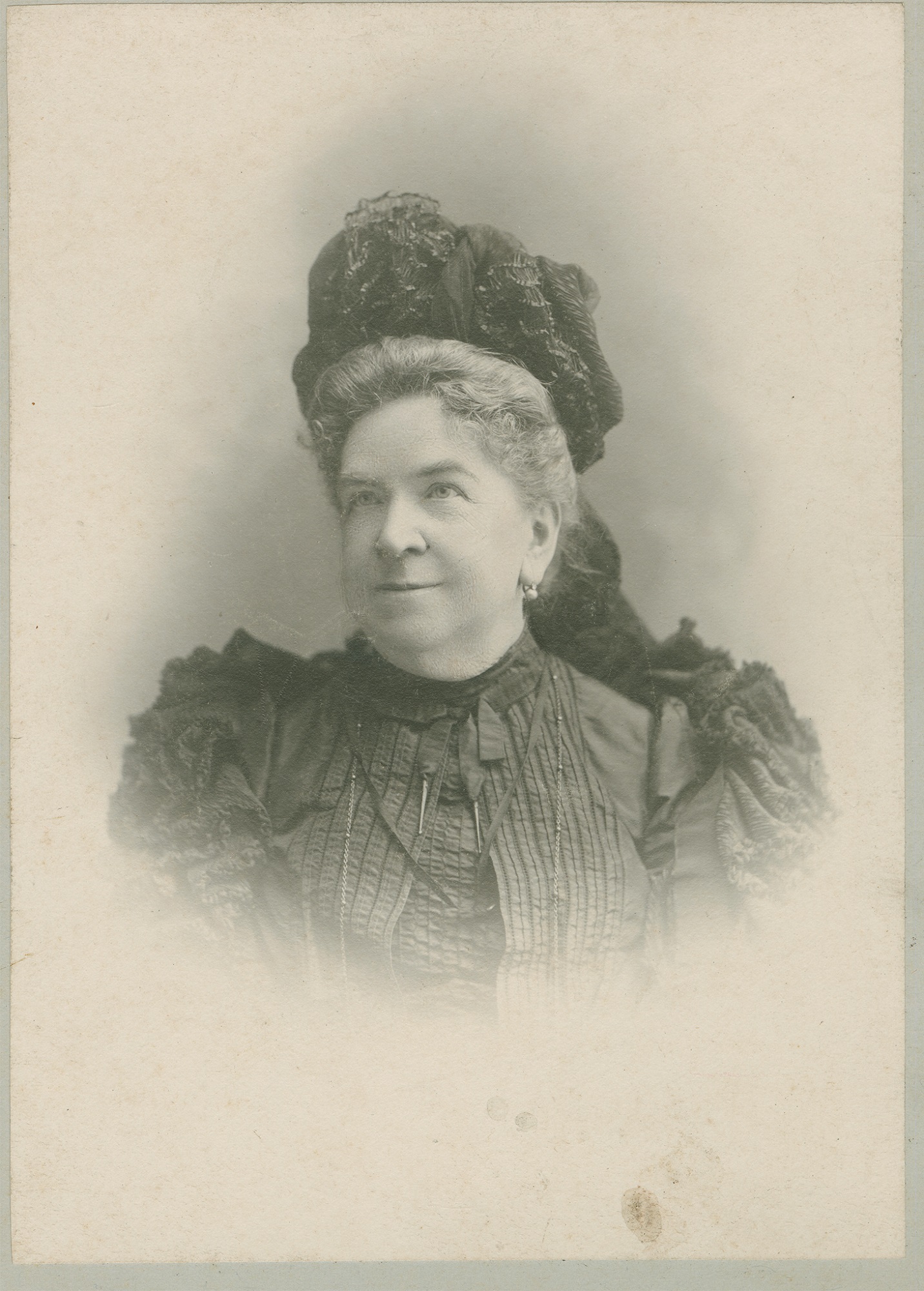 By the time these photographs were taken, ca. 1890, the Hills were established Denver citizens. Alice Hale Hill was the daughter of a Providence, Rhode Island, watchmaker. She was a student at the Troy Female Seminary before her marriage to Nathaniel P. Hill on July 26, 1860. 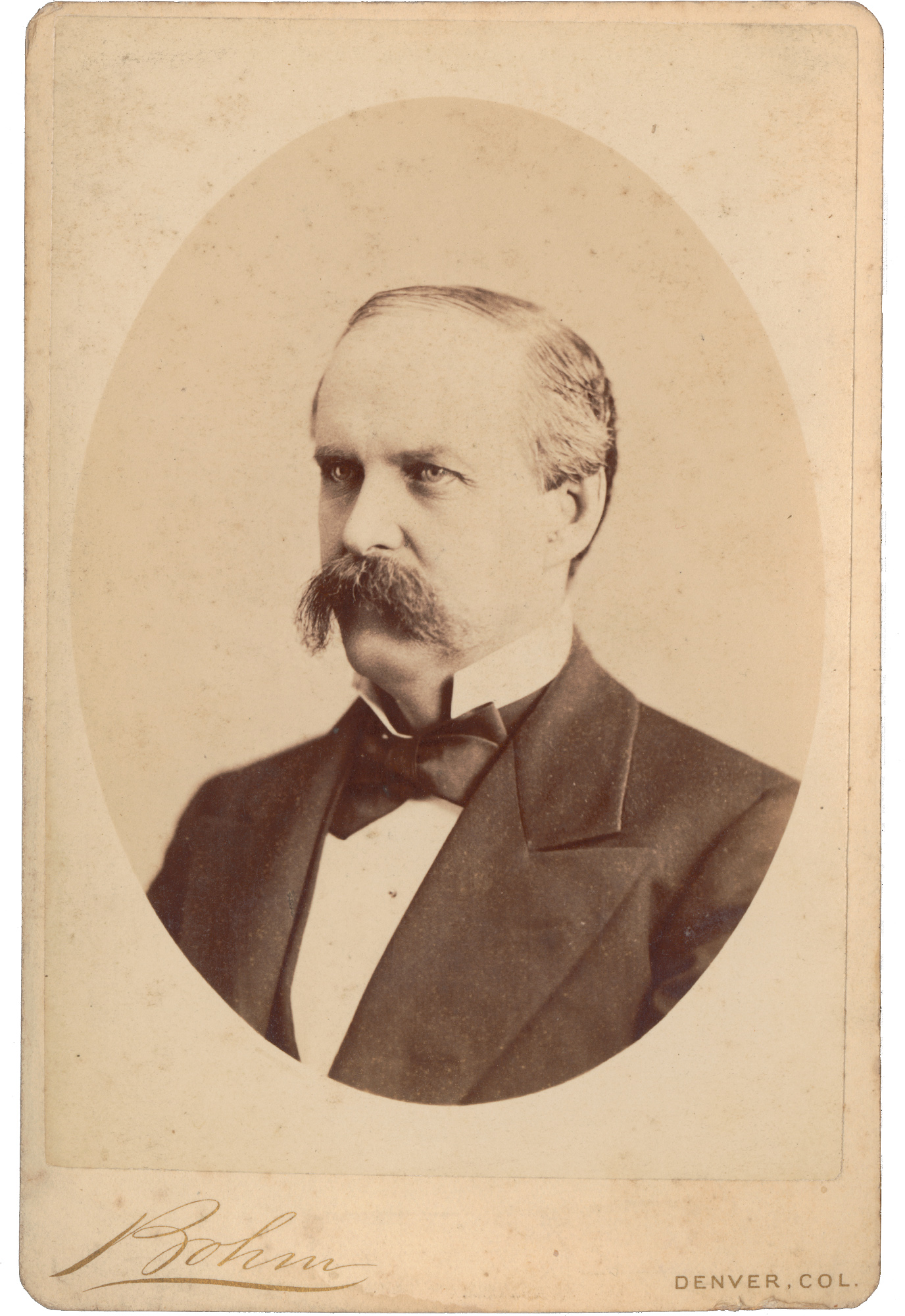 Nathaniel Peter Hill was president of the Boston and Colorado Smelting Company from which he derived much of his fortune. Besides the Clements’ holdings, many of the Hill family’s papers are held at History Colorado.

As it turned out, Alice and Nathaniel Hill did not face the amount of hardship that Alice so feared. Three years after moving West, the Hills resided in a comfortable $30,000 home with Mary Halpin, an Irish woman, working as live-in domestic help. Nathaniel spent his days working in the company offices and Alice managed the family sphere. Although she did at times battle with the dust creeping into the house, there was still time for social calls and visits from friends. They attended dinner parties and partook of a varied diet which included dishes such as oysters, sandwiches, ice cream, and champagne. Strawberries even made an appearance though Alice noted that they were rare. The arrival of the railroad certainly helped increase the availability and variety of goods while it also allowed the Hills to maintain close relationships with loved ones back in Rhode Island. Alice’s sister Bell visited several times, and Crawford and Isabel returned to Providence for schooling, with their parents making regular trips to visit.

In the end, the move to Colorado proved a fruitful one for the Hill family. Nathaniel Hill’s Boston and Colorado Smelting Company attained great financial success after his introduction of Welsh smelting practices to Colorado mining operations. The family lived comfortably in Black Hawk and later Denver with live-in household staff, though the children (a third child, Gertrude, was born in 1869) were sent back East for schooling. Following Hill’s term as mayor of Black Hawk, he continued his political career with a term as United States Senator for Colorado from 1879 to 1885. Alice became a leading figure of Colorado society in her own right, earning a place in Representative Women of Colorado (1911) alongside her two daughters. She continued in charitable work, serving as president of the Denver Free Kindergarten Association and of the YWCA. They regularly traveled back East to see family and friends, made extended trips to Europe, and lived in Washington, D.C., during Nathaniel’s senatorial term. The story of the Hill family and their move West is not that of a “wild way of living” feared by Alice, but rather an extension of their previous life back East and the security and privileges it afforded.