The American Dream is nebulous, conjuring up indistinct visions of wealth, opportunity, and freedom in its many forms: freedom from want, freedom from obligation, freedom to do as one chooses. When Mexico ceded California to the United States under the Treaty of Guadalupe Hidalgo in 1847 and gold was subsequently discovered in the region, Americans began to map their dreams of success onto those western-most lands. When George Foster’s The Gold Mines of California was printed in 1848, the preface wondered at how “Already in a remote spot in the valley of the Sacrameto  ̶  sprung up as if by magic, at the mere sound of that seductive syllable, GOLD, ̶  last midsummer saw a busy bustling village of four thousand people. . . . Such tales appear like the recital of dreams to the staid, easy-going, sober-paced inhabitants of the old world.” A seemingly miraculous place where dreams took root, cities grew overnight, and prosperity beckoned, California called out to fortune-seekers.

One such dreamer, Alexander Parker Crittenden, hailed from a beleaguered family in Kentucky. As he worked to extract his widowed mother from debt in 1837, he fell hard for the strong-willed Clara Churchill Jones. The Clements Library’s Crittenden Family Papers document their early courtship, when he wrote frequently to Clara, cross-hatching his letters to double the amount of starry-eyed remembrances he could fit into one mailing. “You must, indeed you must,” he implored, “keep that wandering spirit of yours at rest, else I shall be forced to find some charm to quiet it. A kiss every night would be effectual, but how is this to be accomplished when there is such a distance between us. There is but one course  ̶  to appeal to yourself not to appear to me in my dreams. ’Tis such a disappointment when awakening to find it all but a dream.” A young man of 21, Alexander found his mind occupied with love and desperate attempts to secure his financial footing to assure the Churchill family that he could support a wife. His dreams for the future were entangled with his dreams of Clara. He sheepishly admitted that in his pursuit of success, “I must lead an unsettled life, and in all probability soon be compelled to go south or West.” 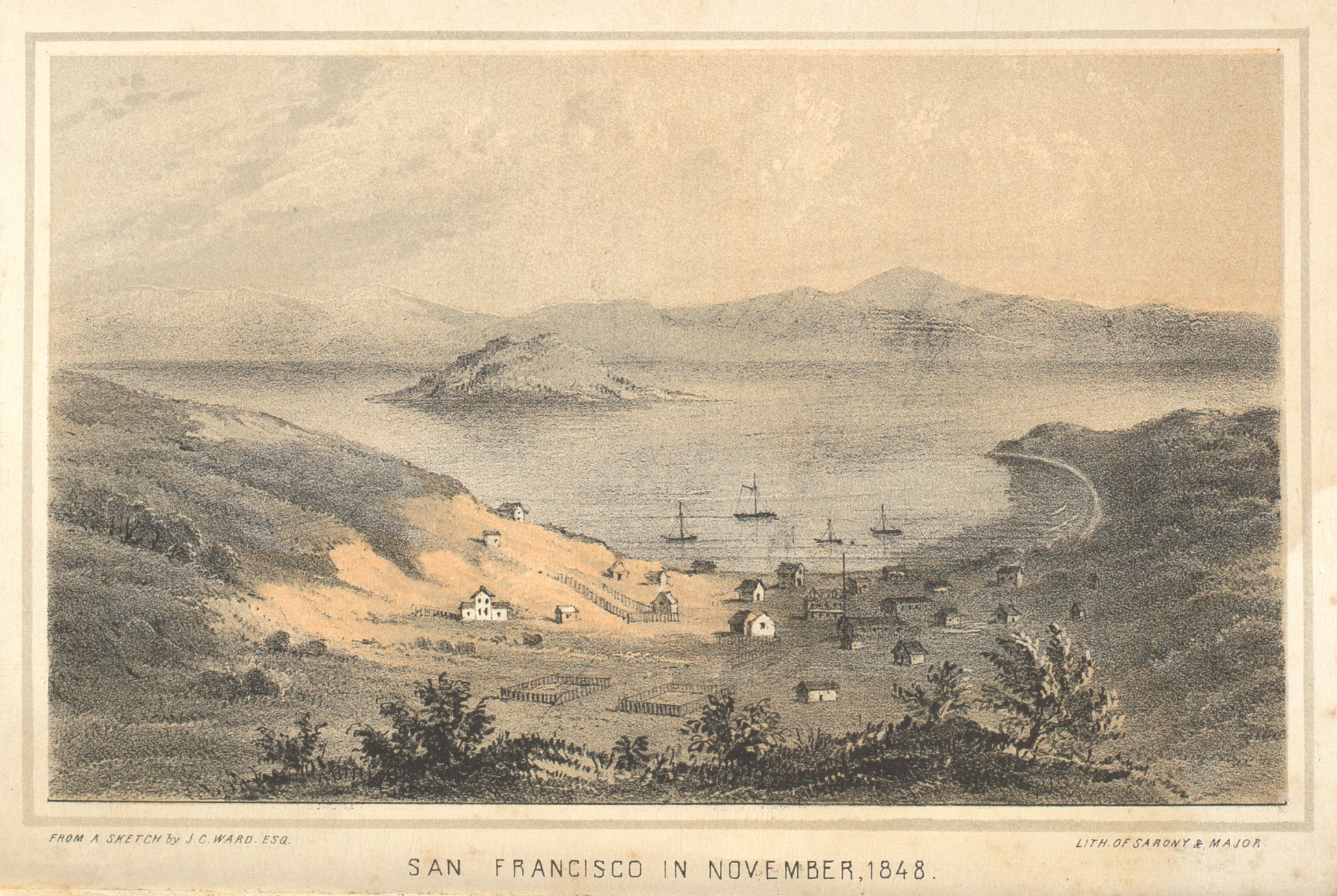 Californian cities grew at a bewildering pace. Bayard Taylor, sent by Horace Greeley of the New-York Tribune to report on the Gold Rush, noted in his book Eldorado (1850) that “People who have been absent six weeks came back and could scarcely recognize the place.”

In this, he was prescient. Clara did wed him, and in 1839 they removed to Texas where he practiced law. For nearly a decade the couple and their young family struggled with debt and financial instability, far from their relatives back east. Their first meal together in Brazonia, Texas, consisted of handfuls of wild blackberries they had gathered. Determined to build a better future, Alexander uprooted himself again in the spring of 1849 and set his sights on the newly booming California. He left Clara and their six young children behind as he set out to earn his way. He settled in San Francisco by December. “I can hardly give you any description of this region which would convey any idea of it,” he wrote to his wife on Christmas Day. “It is the wonder of the age, a perfect Babel.
The Port is crowded with shipping from every quarter of the world and people of all nations and tongues are streaming through the streets of the city in a tumultuous and never ceasing tide . . . There is hardly a shelter for the heads of the inhabitants, though the hills are whitened with tents . . . It is a scene perfectly bewildering.” Despite this fantastical scene, he made it clear that his purpose was singular: “accumulate a fortune” and secure for Clara the “position to which I have always looked forward.” Finding himself drawn into the whirling speculation that undergirded the young San Francisco, Crittenden made many a financial misstep. Months turned into years, and Clara and the children still did not make it out to California. He kept writing and dreaming about success, about acquiring “property here as the foundation of a fortune,” of returning for Clara a moneyed man ensuring “every one will meet me with smiles and extended hands.” 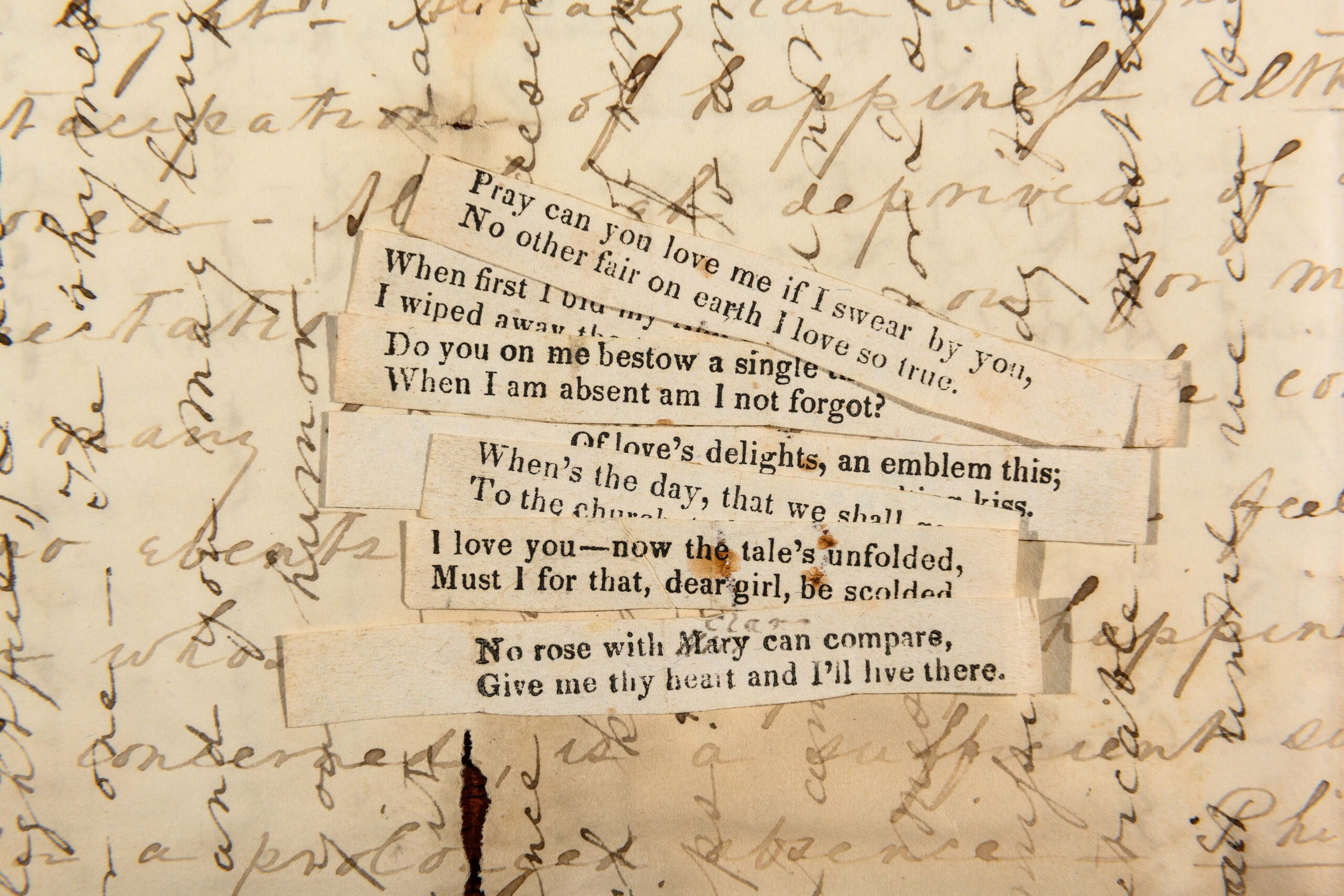 In one of his early courtship letters to Clara, Alexander enclosed couplets of love, altering one to include her name.

He tried to remain optimistic, but as time and separation weighed heavily on him, the tone of his letters shifted. He asked Clara to send clippings of the family’s hair so he could make jewelry to remember them by. He asked for daguerreotypes so he could see how his children had grown. By June 1850 he admitted, “I am heart sick at this long separation . . . All the money in California will not tempt me to stay away from you yet a year . . . When the excitement of the day is over  ̶  when my hours of study and preparation for the morrow are over, and long after midnight I close my books  ̶  reflection will come, the wife and children will rise up before me, and the question present itself, shall we ever meet again?” Dreams of fortune now mingled with dreams of family; the pursuit of one caused a rift in the other. 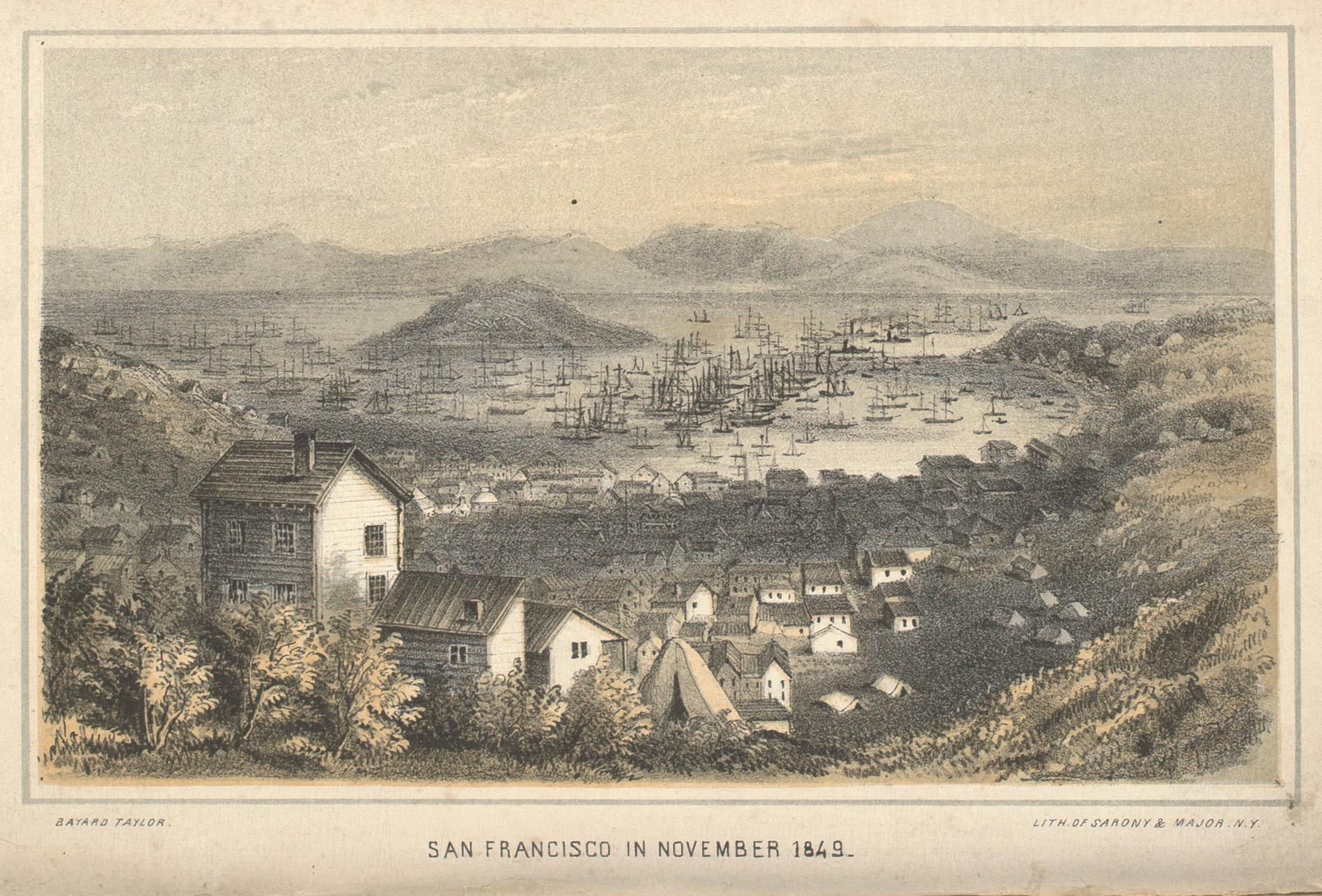 Crittenden wasn’t alone in looking desperately back to those that were left behind. In 1850 Bayard Taylor wrote a two-volume account of his travels in California, Eldorado; or, Adventures in the Path of Empire. In it he describes the “restless, feverish tide of life” in San Francisco. And yet, for all the bustle and confusion that made it such that “one knows not whether he is awake or in some wonderful dream,” the most action he saw in the city stemmed not from gold or commerce but the arrival of a steamer carrying mail. “The little Post Office, half-way up the hill, was almost hidden from sight by the crowds clustered around it,” he marveled. The postmaster “barred every door and window from the moment of his entrance” to hold the crowds at bay. Crittenden encountered this phenomenon firsthand. Seeing a line of more than 200 people waiting in front of him, he lamented, “There was no chance of getting to the window by waiting even all day.” Desperate for news from business associates or tender words from loved ones, mail drove San Francisco into an utter frenzy.

Human connection was closely prized by those in the western city. When a great fire rushed through San Francisco in May 1851, Alexander described how he went about trying to save his possessions. “I had not much to lose,” he admitted. “The most highly prized of all my goods & chattels were your portraits. They were the first things I thought of. I did not know how to secure them. I tried to put them in my pockets  ̶  but reflecting that they would be injured, perhaps destroyed by the fire and water to which I must be exposed  ̶  I concluded that the trunk was the safest place for them until the moment came when we should be compelled to retreat.” Surrounded by a city engulfed in flame, “a perfect sea of fire roaring and rushing around us with a sound louder than the breaking of the waves on the shore,” Crittenden held on tightest to the daguerreotypes of his family, his connection to those he left behind as he chased visions of success. He was thoughtful about sending Clara pictures of himself as well. One he sent in October 1850 after his plans to visit her were dashed once again by a financial setback, “a blow almost too heavy to bear.” “If I cannot come in person I will send my image. It is the best I can do, but it is a poor substitute. It is deficient in the warm heart beating only for you. It cannot open its lips and tell you how dearly you are loved.” Alexander’s dreams had shifted from earning a great fortune to finding a way to be together again. “I wish we could live upon affection and that that most hateful of all words  ̶  money  ̶  might never be mentioned again.” 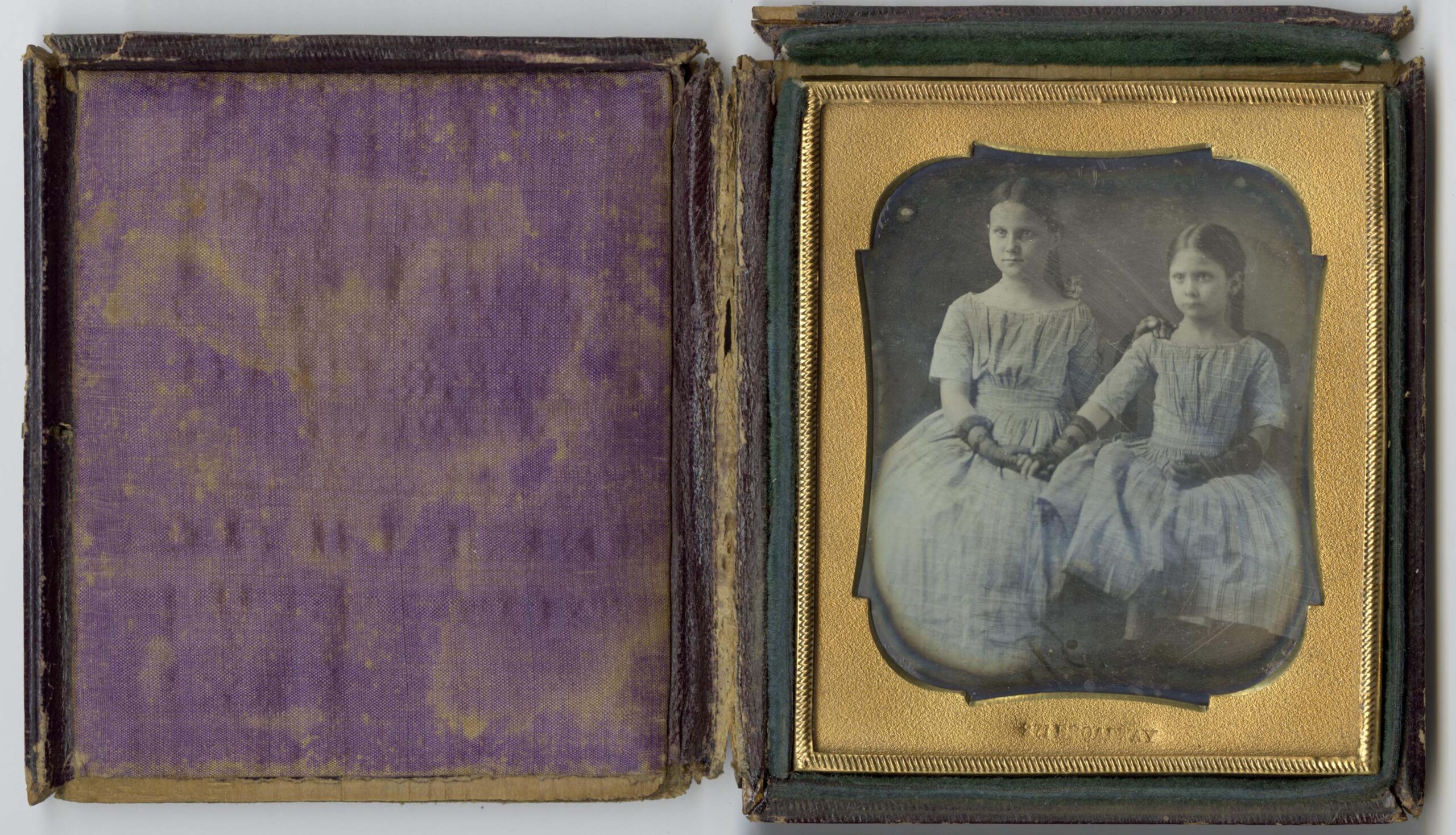 This photograph of Alexander’s eldest daughters Laura and Nannie Crittenden was likely taken sometime around 1851, posing the alluring possibility that it could have been one of the daguerreotypes he guarded so carefully during his early years in San Francisco. 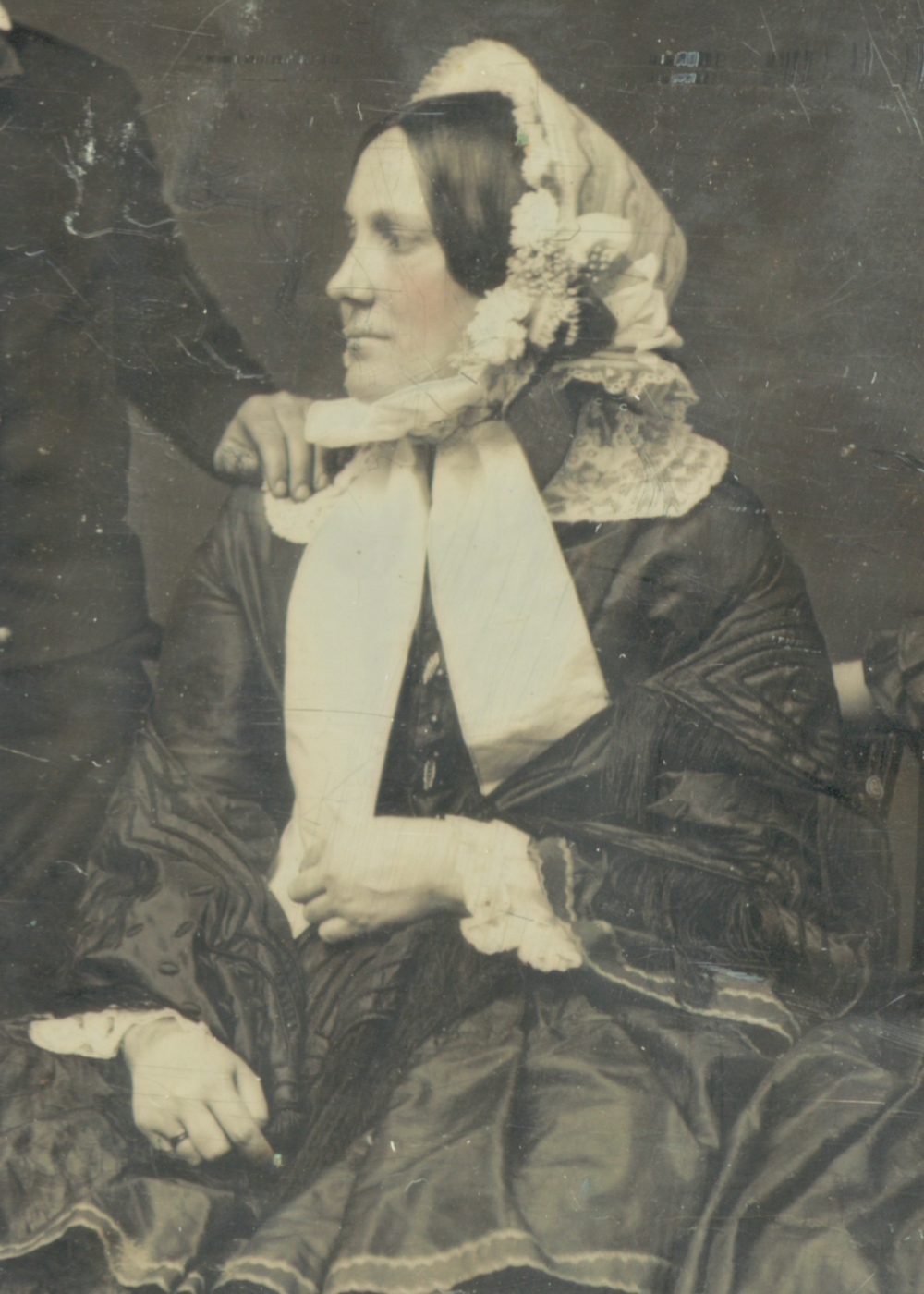 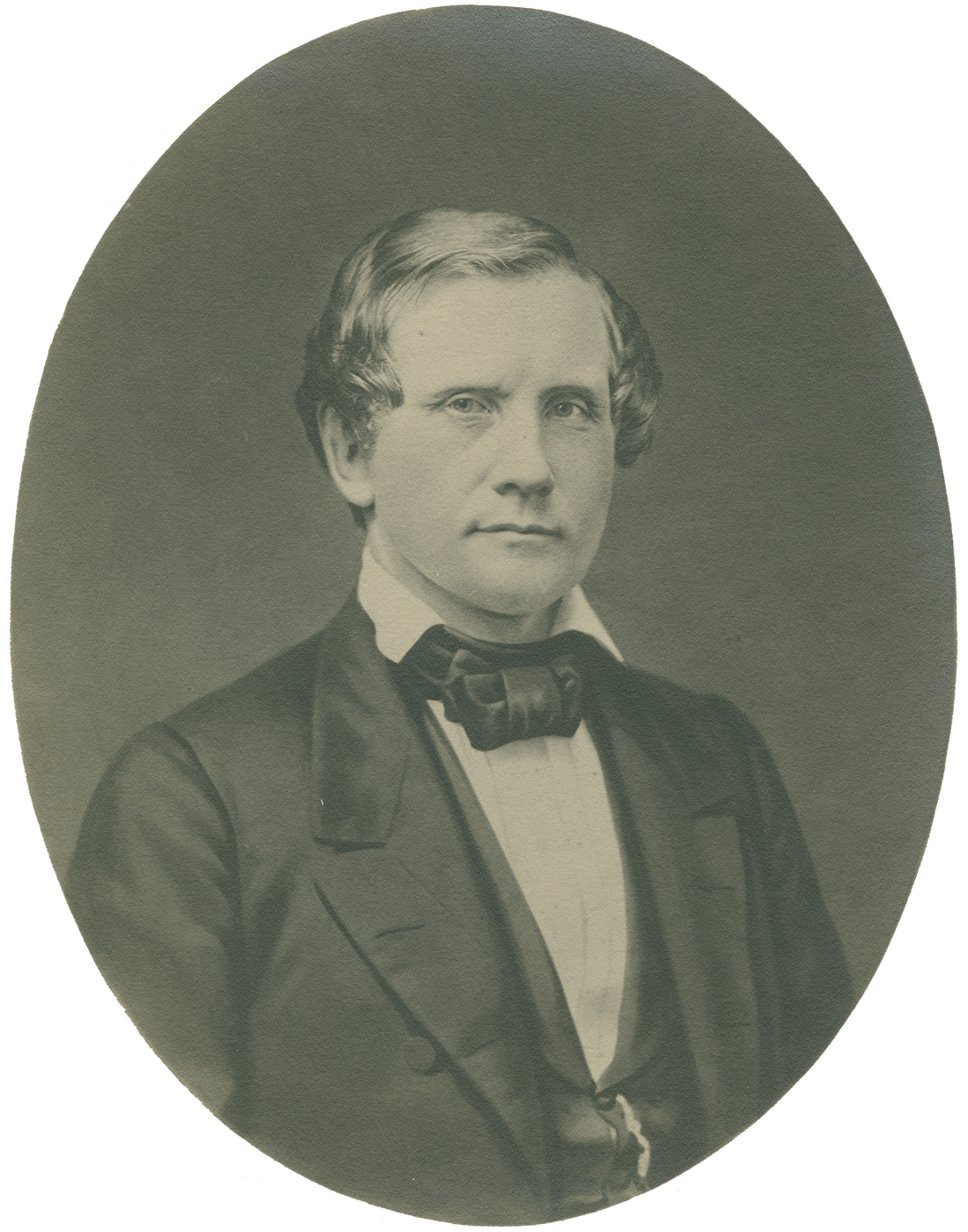 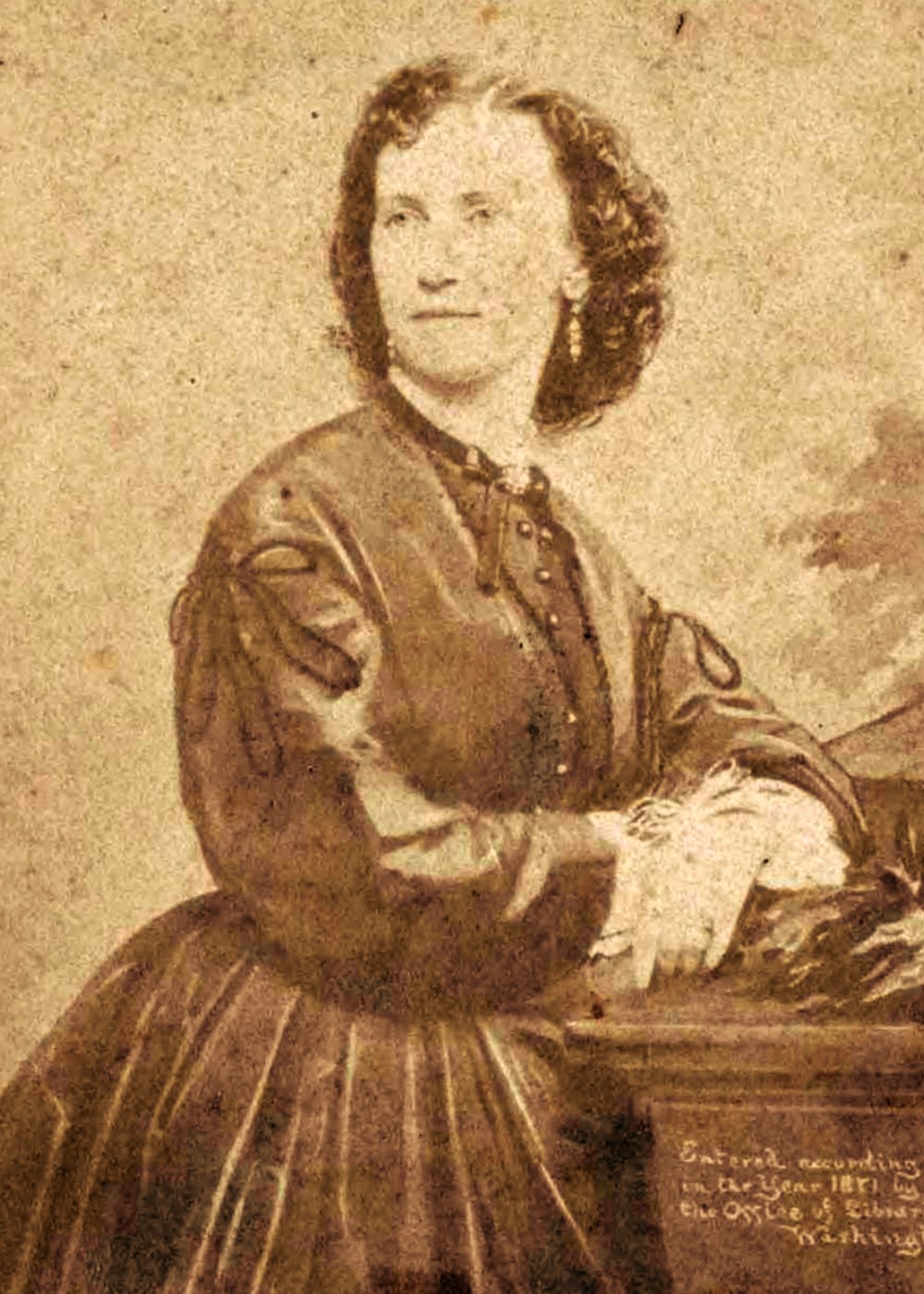 Like many dreams, however, the Crittendens’ proved elusive. After Clara joined Alexander in California, their marriage still struggled. Together bearing fourteen children (eight of whom survived into adulthood), daily expenses weighed heavily, particularly for a family that never quite mastered frugality. Then in 1863, Crittenden, a staunch Confederate sympathizer, settled for a time in Nevada as he dodged swearing the federal oath of allegiance during the Civil War. While once again separated from his wife, he entered into a long-standing affair with his landlady, Laura Fair. For the next eight years, he maintained tumultuous relationships with both women, promising Laura he would procure a divorce in order to marry her but all the while unable to follow through to make it a reality. His letters to Clara reflect a complicated marriage, vacillating between cold irritation and periodic affirmations of love and devotion. Still, they stayed together. In 1870, Alexander appeared to have been more financially comfortable, and while Clara was away visiting family back East he lavishly furnished a new home for her as a surprise. Upon Clara’s return, Alexander met her at the station and accompanied her by ferry back to their house. Laura Fair, furious and jealous by this latest betrayal, was also on that ferry and fatally shot Alexander in the chest. During her murder trial, her defense argued she had suffered from sleeplessness for weeks prior to the shooting, spurred by her “many disappointments and anxiety,” strung along by Crittenden “for these eight years, living and feeding upon nothing but hope deferred.” Fortune and favor slipped away once again, dreams and hopes not quite enough to carry any of them through.

In 1851 British sailor William Shaw published Golden Dreams and Waking Realities: Being the Adventures of a Gold-Seeker in California and the Pacific Islands. Lured by the promise of Californian wealth, Shaw set out for the mines. After a grueling attempt, he abandoned the dream, packing his belongings to seek better prospects. “The wind was blowing hard and the rain pelted heavily down, as giving a last long look at the diggings, I thought of the golden dreams and buoyant hopes which had lured us to them; and turned my back upon a spot where these had been so rudely dispelled by the waking realities of privation and suffering.” Many fortune-seekers were drawn to the promise of California by stories of successful mines, of gold dust blowing in the streets, of cities erupting into being and bustling with newcomers and opportunities. But mining proved difficult, unsteady work, requiring far more financing and luck than most had. And even those who were drawn to the coast not by gold but by the attendant boom it brought to the region, found that life in the new West could be risky. The speculative frenzy that undergirded San Francisco’s growth could tumble even the most optimistic of men. Alexander Crittenden struggled alongside them. Working for years to secure a strong enough footing to bring his family with him to California, his dreams of financial freedom waned in the face of homesickness and separation. And in turn, when his family was reunited, happiness again failed to follow. Love and stability, like his dreams of fortune, were always a step or two ahead of him. San Francisco may have sprouted from Americans’ dreams, but that doesn’t mean they always came true.