“In thus knocking down the black man and kicking him when he is down we show a dirty meanness unworthy a nation of friends… I feel bound to say sorrowfully but fearlessly that as citizens you are in all these particulars guilty before God unless your votes & political influence have been in opposition to slavery…”
–Norton Strange Townshend, undated manuscript 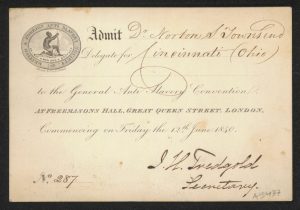 Norton Townshend’s notes indicate that his abolition sympathies were present from a young age; in one of only a handful of references to his teenage years, he records the influence of the “Antislavery Society in [the] Township”1 on him during this period and notes that he was “brought up to believe that Slavery was the most unjust and unchristian institution in the world.”2 However, Townshend’s first known antislavery activities began around age 22, when he became involved with the Underground Railroad in Cincinnati. The city’s proximity to the slave state of Kentucky made it an important early stop on the clandestine route to Canada. Townshend’s role as a “forwarder” involved procuring carriages from a livery stable and conveying information about routes and stations to the driver. In addition, he states that he was “often called on to take a drive” with slaves hidden in his wagon.

In Cincinnati, Townshend also became acquainted with men he called “the strong abolitionists.”3 This included Salmon P. Chase, who was called by his critics “the Attorney-General of fugitive slaves” for his legal work opposing the Fugitive Slave Law. Townshend also befriended James G. Birney, who would run for president as the Liberty Party candidate in 1844. He met both men while attending the so-called “Matilda trial,” in which Chase defended an African-American woman named Matilda Lawrence from a master who wanted to take her back to Kentucky as a slave. After hearing Chase’s earnest defense Townshend decided, “There is a man I can, and will vote for whenever I have the opportunity.”4 Regarding James Birney, he noted an admiration for “his noble conduct in emancipating his own & wife’s slaves” and his fine “character.”5 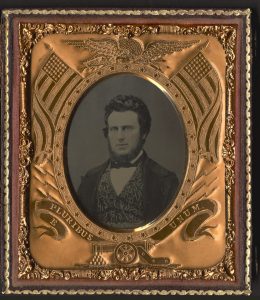 In June of 1840, at Birney’s urging, Townshend served as the Ohio Antislavery Society’s delegate to the World Antislavery Convention in London, where he made a number of anti-slavery contacts, including French statesman Adolphe Cremieux and Irish abolitionist James Houghton, after whom he would name his second son. Upon his return to the United States in 1841, he joined the Liberty Party and worked for the election of Liberty candidates as the Secretary of the Lorain County branch. He also made a number of speeches around Ohio, in small towns such as Dover and LaGrange. In his lectures, many of which are preserved in the collection, Townshend repeatedly stresses that slavery is not just a Southern issue, and that the North and all of its institutions are guilty by association. He also outlines humanitarian objections to slavery, asking, “When did the peaceable Africa lose his right to himself?”4 and emphasizing the ill-effects of slavery. He particularly opposed slavery’s destruction of African American families and its degradation of their intellects and labor, as well as the cruelty bred in whites by slave ownership. Much of this he addresses in a lecture that begins, “The subject necessarily one of deep interest…” 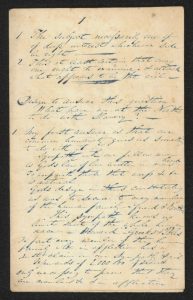 During the mid-1840s, one of Townshend’s major political goals was to bring about the repeal of Ohio’s Black Laws, which restricted the rights and liberties of Ohio’s African Americans. In his “Address to the Free Electors of Lorain County” he enumerated the injustices of the laws:

“[T]he people of Ohio have enacted laws by which several thousands of their fellow citizens are required to give bonds for their support and good behavior, or be driven from the State–are taxed for the support of common schools and deprived of any benefit of the fund created by that tax–are debarred from giving testimony ‘when either party in a suit is a white person,’ and are thus subject to all the abuse which unprincipled white men may choose to heap upon them, with no legal redress–are deprived of the right of suffrage–and in some cases where their personal liberty, and in fact their lives are at stake, they have no right to a jury trial…This is what we call ‘framing mischief by a law.'”6 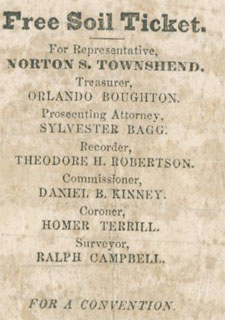 In 1848, the Liberty Party, along with several other small abolition parties, was absorbed into the new, somewhat more moderate Free Soil Party. Townshend attended the convention in Buffalo, New York, where the Free Soilers determined their platform and nominated Martin Van Buren for president. Galvanized, Townshend decided to pursue a prominent role in the party, running for the Ohio General Assembly on the Free Soil ticket and giving up his medical practice after winning a seat representing Lorain County.

Townshend was elected during a famously tumultuous period in Ohio’s political history. Hamilton County had recently been redistricted by the Whigs to favor their party, and when the Whigs gained extra representation as a result, Democrats protested what they saw as unconstitutional gerrymandering. Both the Democrat and Whig candidates showed up at the House of Representatives on December 4, 1848, the first day of the session, and each side swore in its Hamilton County members, resulting in a majority-less Assembly and giving a disproportionate amount of power to the eight Free-Soil representatives, who held the “balance of power” between the battling major parties. These were circumstances that Townshend, guided by advice from Chase, would use to Free Soilers’ advantage. 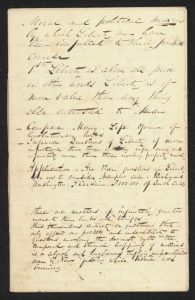 Townshend’s influence in the Assembly was further cemented when he became Chairman of the Committee on Privileges and Elections, which was tasked with reporting on which set of Hamilton County representatives would be officially recognized. Townshend allied himself with the Democrats and used his bargaining position to get support for several of his pet causes, including the repeal of Ohio’s Black Laws, which occurred February 6, 1849. Townshend also negotiated in favor of a second Constitutional Convention to be held in 1850-51, in order to make revisions to Ohio’s Constitution, and for the selection of his friend Salmon P. Chase as senatorial candidate. At least some of Townshend’s guidance in this political maneuvering appears to have come from Chase himself, who was Townshend’s frequent advisor and correspondent during the period.

In the winter of 1850-51, Townshend served as a delegate to the Second Ohio Constitutional Convention, where he boldly proposed to strike the words “white” and “male” from a section of the Ohio Constitution concerned with voting rights. In a speech given on February 8, 1851, he outlined the hypocrisy of those who would deny the vote to oppressed groups:

“But it has been said of colored persons repeatedly, ‘this is not their country.’ Is it yours? And if it is, how did you come by it? The Caucasian is not the aboriginal race here, any more than the Negro. Do you claim that it is your country, because it is the place of your nativity? Were not colored persons born here, as well as yourselves, and many of their families have been in the country as many generations as yours. Do you call it your country, because white men fought to achieve its national independence? Did not black men also join that sturggle?… There is one particular in which we have a better right than they, that is “the right of the strongest,” a right always recognized, I believe, among robbers–but not usually urged among honest men.”7 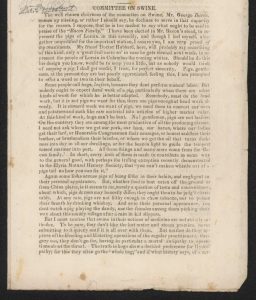 In his essay, “Committee on Swine,” Townshend brings his interests in agriculture and abolition together in a scathing satire. Norton Strange Townshend Family Papers, Box 18, Folder 7.

Although the resolution failed, 72 to 7, Townshend was undeterred in his battle to extend civil rights to Ohio’s African Americans and women. He next set his sights on national politics and was elected to the 32nd United States Congress as a Representative from Ohio from 1851-53. By this time, he, like Chase, had left the Free Soil Party and become a Democrat, in hopes of abolishing slavery by a carefully constructed coalition. Although in his Liberty Party days, he had argued fiercely against such a “lesser of two evils” mentality (see “Moral and Political Maxims,” above left), as his career progressed, he became more pragmatic.
Townshend’s most notable speech in Congress occurred in June 1852, and called for a repeal of the Fugitive Slave Act on the grounds that no democratic government could deny the basic rights of any group of its citizens. He also noted that the possibility of secession by the South over the Fugitive Slave act was “nonsense,” as “the Union is infinitely more important to the slaveholders, than the slaveholders are to the Union.”8 Another notable speech was made in response to claims by Rep. Edward Stanly of North Carolina that his British birth prevented him from being a true American, with Townshend countering, “I think men may understand and appreciate the principles of civil liberty, though not born on this continent…”9 Townshend was not re-elected to the House in 1853, perhaps as a result of redistricting. At the urging of Chase, he next ran for the Ohio State Senate, and was elected to a term there for 1854-55. This marked the end of his direct political involvement and the beginning of his passionate pursuit of improvements in agricultural education.
Agriculture and Educating the Farmer 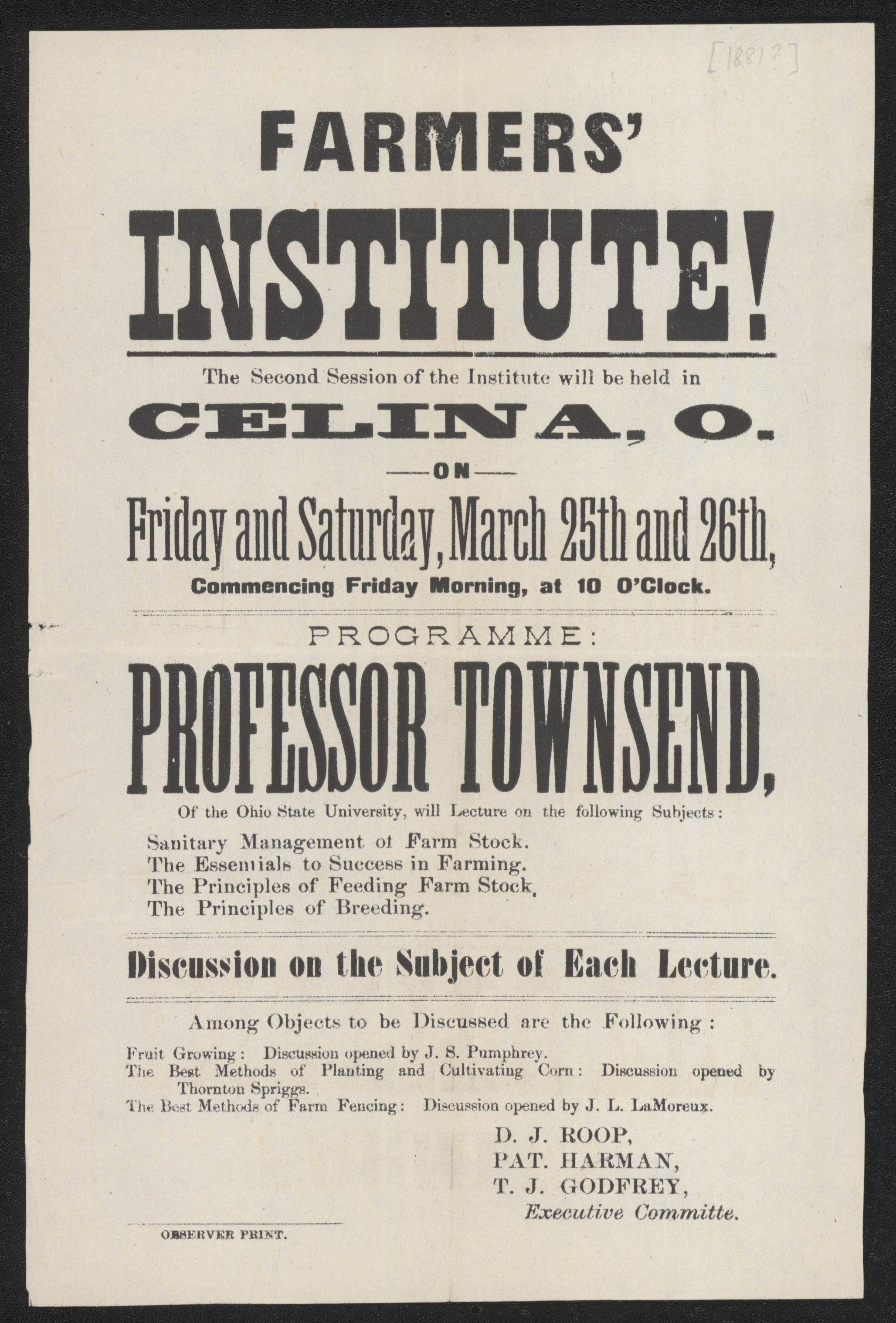