“Nothing did I so much desire as a good education. Indeed I can scarcely recall a time when I had not a secret determination that somehow or other I would have one… & it grew with me…”
–Margaret Bailey, 1854 letter 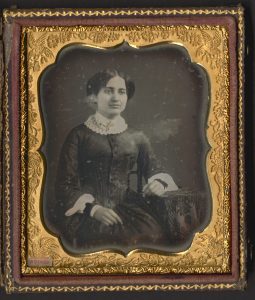 The Norton Strange Townshend Family Papers are a rich source of 19th century women’s history, due largely to the inclusion of the papers of Margaret Bailey Townshend, Norton Townshend’s second wife. Margaret, who grew up orphaned and impoverished, taught mathematics at several women’s schools in the 1840s and 1850s before marrying Townshend at age 31.

Born in Clarksburg, Virginia (now West Virginia) in 1823, Margaret was the second of the five Bailey children. Her father worked as a farmer and Baptist minister but the family was “very poor”1 and moved increasingly farther west to pursue a better life, settling first in Kentucky and then in Missouri. In 1835, when Margaret was 12, her parents died of a disease that was probably cholera within four days of each other. Margaret and her brother and three sisters were divided among three different households. Margaret and nine-year old Miriam drew the worst lot; they were taken in by a physician named Dr. Hathaway, who promised to educate them and make them his heirs, but instead sold their possessions for his own profit and demanded endless labor from them. As Margaret wrote, “[I]t soon proved we were not wanted for children. We were wanted for work, for all the service we could render.”2 In an early letter to Townshend, Margaret wrote, “we never knew anything… but servitude–I always think of it as the white slave period of my life.”3

However, in Margaret’s eyes, Hathaway’s greatest betrayal was his broken promise to send the sisters to school (“in nearly five years we went to school only three weeks”4). Margaret eventually found herself and her sister a new home by writing to another relative: “after a time I was able to get a note to him, requesting that we be taken away…”5 She used her dwindled inheritance of $200 from the Bailey estate to begin her education in earnest. After studying on her own sufficiently to pass the entrance exam, she began attending the Monticello Female Seminary in Godfrey, Illinois in 1842. Margaret found that in spite of her late start, she excelled in her classes, particularly mathematics. Her gifts were recongized by Philomena Forbes, Monticello’s principal, who wrote the following on a certificate upon her graduation:

“Miss Margaret A. Bailey, having successfully completed the full course of instruction in this Seminary, this testimonial is now given as evidence of the same, and also, as a token of the high esteem and affectionate regard of her Teachers; and as expressive of their earnest wish that she may so use her acquirements as to answer the great ends of her existence on earth, and be made a partker of glory, honor and a blissful immortality beyond the grave~~”6 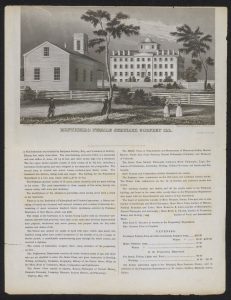 In 1846, Bailey accompanied a colleague to Putnam, Ohio to serve as a teacher at the Putnam Ladies Seminary, and then in 1853, she secured employment at the newly-established Esther Institute in Columbus, where she taught mathematics. Throughout this period, she used her earnings to pay for the educations of her three sisters, Miriam, Melinda, and Mary. She then turned her attention to other matters:

“Now my debts were all paid & my sisters did not need my help. Up to this time my own education, my work at teaching & helping my sisters had so thoroughly occupied me that I could think of nothing else. From in my 17th year into my 30th, six offers of marriage had come to me and friends sometimes found fault with me for my indifference on the subject. The sixth I accepted…”7

This final proposal came from Norton Townshend, whom she had met through her physician, Dr. S.M. Smith. According to family tradition, Townshend had seen Bailey on the street and inquired of his companion who the young woman was. He was told that she was “the handsome Miss Bailey.” Townshend was smitten, and arranged a meeting through Smith, their mutual friend. On October 17, 1854, the two were married, and Margaret left city life for his farm to the north. Margaret thus became stepmother to Townshend’s two young children, James and Mary. The couple subsequently had three more children of their own: Arthur Bailey Townshend was born in 1855, followed by Harriet in 1857 and Alice in 1860. 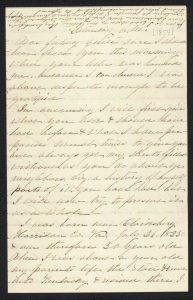 Margaret wrote this autobiographical letter to Townshend in 1854, while they were courting. Norton Strange Townshend Family Papers, Box 1, Folder 28.

Although Margaret never taught school again, she maintained a lifelong interest in education and for many years hosted the Ohio State University Club, an early women’s lecture and literary society, in the Townshend home. She also was engaged in many civic causes, and during the Civil War, raised funds for the U.S. Sanitary Commission, a women’s group which provided supplies and comforts of home to Union soldiers. She regularly participated in the annual Ohio State Fair, serving as a judge of bread, butter, sewing machines, and other agricultural items. Her papers show that she also had a strong interest in the plight of African Americans. Booker T. Washington sent her son Arthur a signed copy of Up from Slavery and instructed him to “put it into the hands of your mother; this will give her a good account of what we are up to at Tuskegee.”8

Townshend was also extremely competent in running the farm and household, especially in matters of money, a role frequently required of her during her husband’s war service and travels. We see evidence of this in much of her correspondence, such as her November 19, 1863 letter to her husband, in which she wrote:

After her death in 1912, she was remembered as a “a cultured woman, of strong character… always interested in the question of education” and “an ardent advocate of women’s suffrage.”8 Another obituary told this story of her passion for mathematics:

“[Norton Townshend] was entertaining at his home a somewhat distinguished astronomer. The guest happened to notice some sheets covered with figures upon a table in the library and quickly recognized them as an astronomical computation. ‘Why, Dr. Townshend,’ said he. ‘I did not know before that you were interested specially in astronomical matters.’ His host replied that the calculation was not his, and that he suspected it was the work of Mrs. Townshend, as indeed it proved to be. She had been computing the data of an approaching eclipse, as a mere mental exercise.”9

Margaret Bailey Townshend’s diaries and many letters are preserved in the collection, along with a number of three-dimensional objects that shed light on her material life: teaching aids, jewelry and decorations made from the hair of loved ones, books on literary and domestic subjects, and household items. The objects she used in teaching and domestic life, brought together with her descriptions of her childhood struggles and career, paint a vivid picture of a highly intelligent and independent nineteenth century woman. 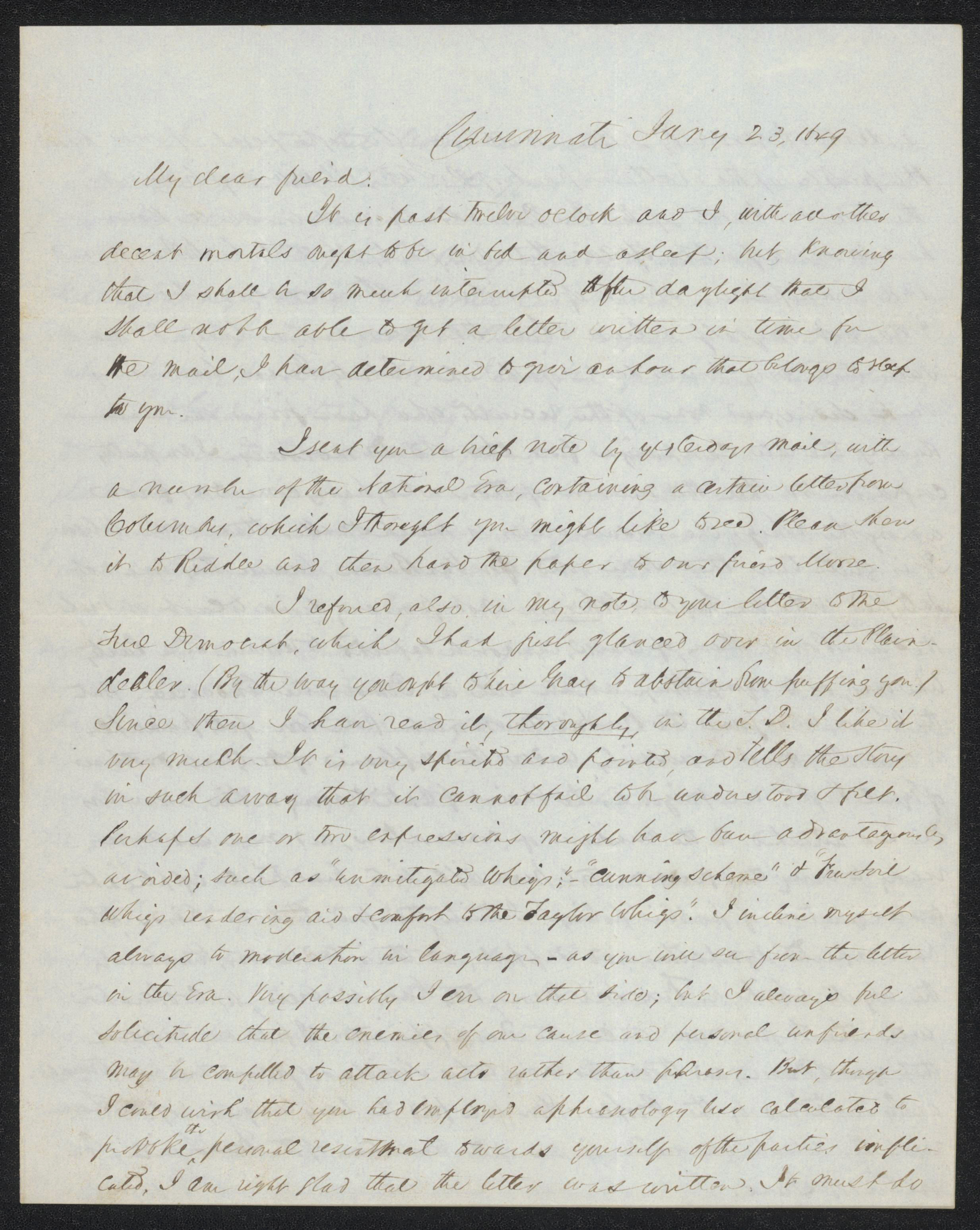