Some of the most fascinating items in the Norton Strange Townshend Family Papers are the 34 letters written to Townshend by politician Salmon P. Chase. Dating from the 1840s to the 1860s, they mainly concern political matters and dealings, though some letters touch on personal and social themes. Frequently they contain Chase’s guidance and advice to Townshend, who, as a fledgling politician, seems to have looked to Chase as a political mentor. 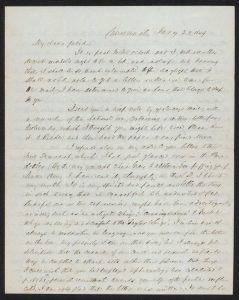 January 23, 1849: “I incline myself always to moderation in language–as you will see from the letter in the Era. Very possibly I err on that side; but I always feel solicitude that the enemies of our cause and personal unfriends may be compelled to attack acts rather than phrases.” Norton Strange Townshend Family Papers, Box 1, Folder 7.

Norton S. Townshend and Salmon P. Chase first met in 1837, when Townshend was studying medicine in Cincinnati. Chase, a 29-year old lawyer, made a strong impression on Townshend during a well-known trial in which he defended escaped slave Matilda Lawrence from a master who wanted to take her back to slavery. Chase and Townshend also shared an involvement with the Underground Railroad in Cincinnati–Townshend as a “forwarder,” securing and dispatching wagons concealing loads of slaves, and Chase as a “stock-holder,” providing the fugitives with money, food, and clothing for their journeys northward.1 Learning of Chase’s political ambitions, Townshend declared, “There is a man I can, and will vote for whenever I have the opportunity.”2

In the 1840s, Chase led the anti-slavery Liberty Party, in which Townshend was active on the local level. When the broader-based Free Soil Party was formed in 1848, both men became leaders in its call for “Free Soil, Free Labor, Free Men,” a slogan which Chase coined. In 1849, Townshend, who had been elected to the Ohio General Assembly, bargained with Democrats in order to send Chase to the U.S. Senate, launching Chase’s national political career. Chase would later serve as Governor of Ohio, U.S. Treasury Secretary during the Civil War, and Chief Justice of the Supreme Court until his death in 1873. From the 1840s to the 1860s, Chase and Townshend exchanged dozens of letters, a total of 34 of which appear in the collection. Chase’s side of the correspondence, with its frank and frequently dramatic descriptions of political events, reveals a shrewd, practical, and principled man, and sheds light on some of his major political moves. 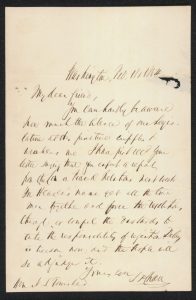 February 10, 1854: “In Heaven’s name get all the true men together and force the resolution through or compel the dastards to take the responsibility of rejection. Delay is treason now and the people will so adjudge it.” Norton Strange Townshend Family Papers, Box 1, Folder 27.

Several of the Chase letters have been reproduced for this exhibit. In an early letter (top right), dated January 23, 1849, we see Chase at his most didactic, instructing Townshend on political rhetoric and the avoidance of ad hominem attacks. Coming as it did during Townshend’s first term as a state legislator, the criticism from a more experienced politcian was probably welcome. The letter also references a major conflict between Democrats and Whigs in the Ohio General Assembly, from which Townshend, as a third-party candidate, derived benefits and helped to resolve.

In several closely dated letters in mid-February, 1854, Chase discusses his role, along with William Seward and Charles Sumner, as a major opponent of the Kansas-Nebraska Act in the U.S. Senate. The bill had been introduced by Stephen Douglas of Illinois in January 1854 and had gone through several revisions, but its basic thrust was that slavery could exist in any of the territories of the United States if it was chosen by popular sovereignty, although it could not be prohibited by such a vote. This was in direct opposition to the Missouri Compromise, which prohibited slavery north of the 36′ 30′ line. 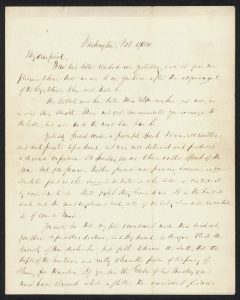 February [12?], 1854: “You will see that my first amendment made athem back out from their Supersedlar [sic] doctrine; and my second is designed to test the sincerity of their declaration, put forth to deceive the north, that the people of the territories are really to have the power of disposing of slavery for themselves.” Norton Strange Townshend Family Papers, Box 1, Folder 27.

Chase and Representative Joshua Giddings published an excoriating response, “Appeal of the Independent Democrats in Congress to the People of the United States”, on January 24, which called the bill “a criminal betrayal of precious rights” and “part and parcel of an atrocious plot” to spread slavery. On February 3, Chase further challenged the bill by introducing two amendments to it, meant to hinder a North-South compromise on the matter. In a measure meant to stir up controversy in the North, Chase”s first amendment explicitly repealed the section of the Missouri Compromise prohibiting slavery north of the 36th parallel, rather than subtly “superseding” it, as Douglas claimed the Compromise of 1850 had. His second amendment called for true popular sovereignty in the territories, meaning that settlers had the power to abolish slavery as well as legalize it, a move that angered the South. Chase’s letters during these few days reveal his intensity as a politician as well as his thoughts and comments on many aspects of the Kansas-Nebraska Bill controversy.

Chase and Townshend were apparently in less frequent contact after Townshend ended his political career in 1855. Chase became increasingly powerful, ascending to Ohio’s governorship and then to Lincoln’s Cabinet, as Treasury Secretary, in 1861. During the Civil War, Chase secured Townshend’s appointment as a Medical Inspector. The extent to which the friendship continued between 1864 and Chase’s death in 1873 is unclear. 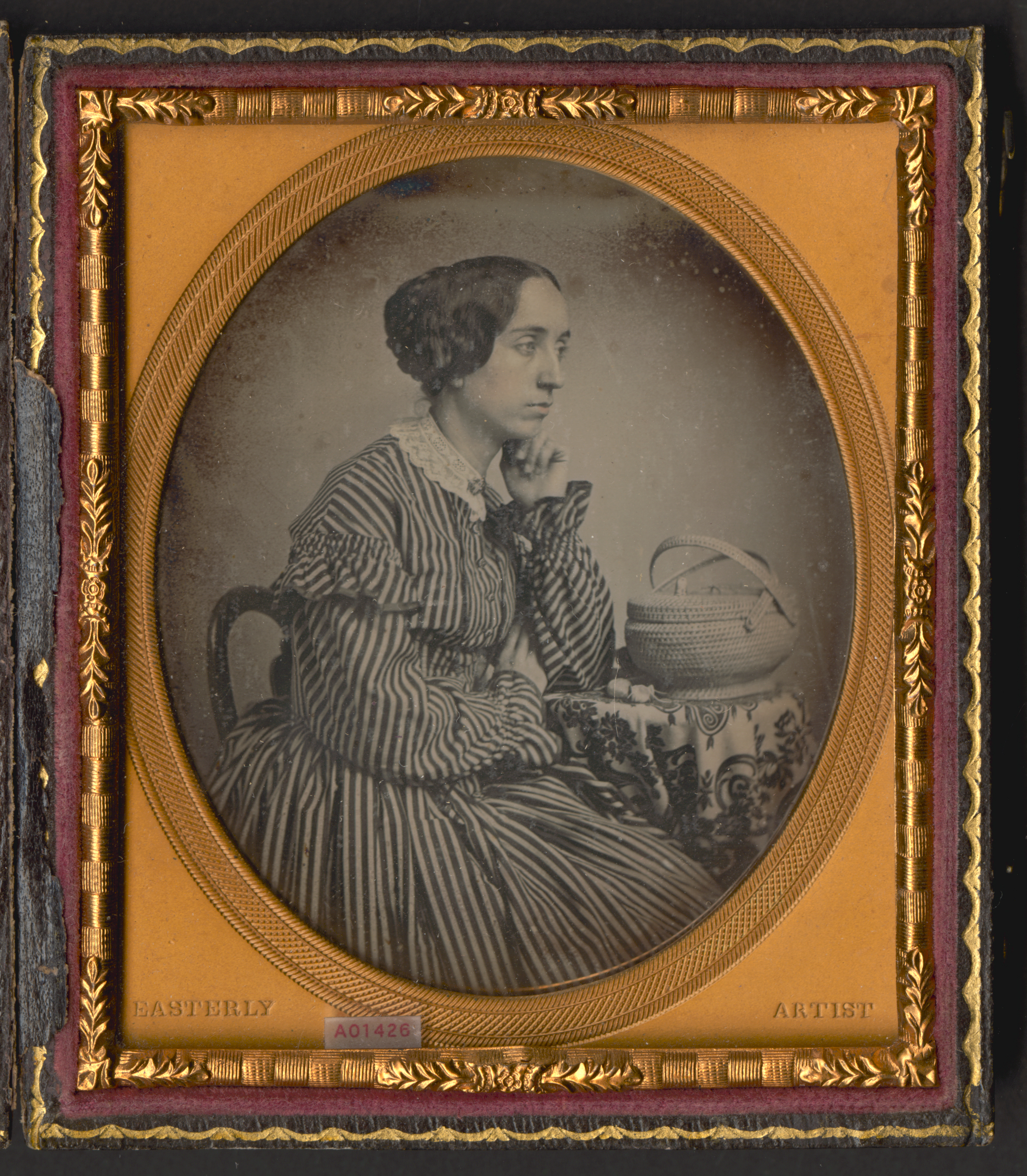