Guest author Jonathan Quint, a PhD candidate in the University of Michigan Department of History and 2020-2021 Clements Library Intern, reflects on one of the Clements’ most celebrated publications 20 years after its release.

Brian Dunnigan’s Frontier Metropolis: Picturing Early Detroit, 1701-1838 is a true tour de force taking readers through the visual imagery or “iconography” of early Detroit in the era before widespread adoption of photographic technology. Dunnigan writes that Detroit experienced “constant evolution” (pg 2-3) from a rough square palisade erected by French explorer Cadillac in 1701 to British stronghold and fur trade post, and finally, in 1796, to a bustling American metropolis primed for the industrial revolution. Frontier Metropolis documents this evolution with large-size, richly detailed, high-quality colored images that bring to life the people and places of early Detroit. With material gleaned from archives in Ann Arbor and Aix-en-Provence, Washington D.C., and points in-between, Frontier Metropolis is of interest to scholars, academics, general readers, and indeed anyone with an interest in the early history of Detroit, Michigan, and the broader Great Lakes region. 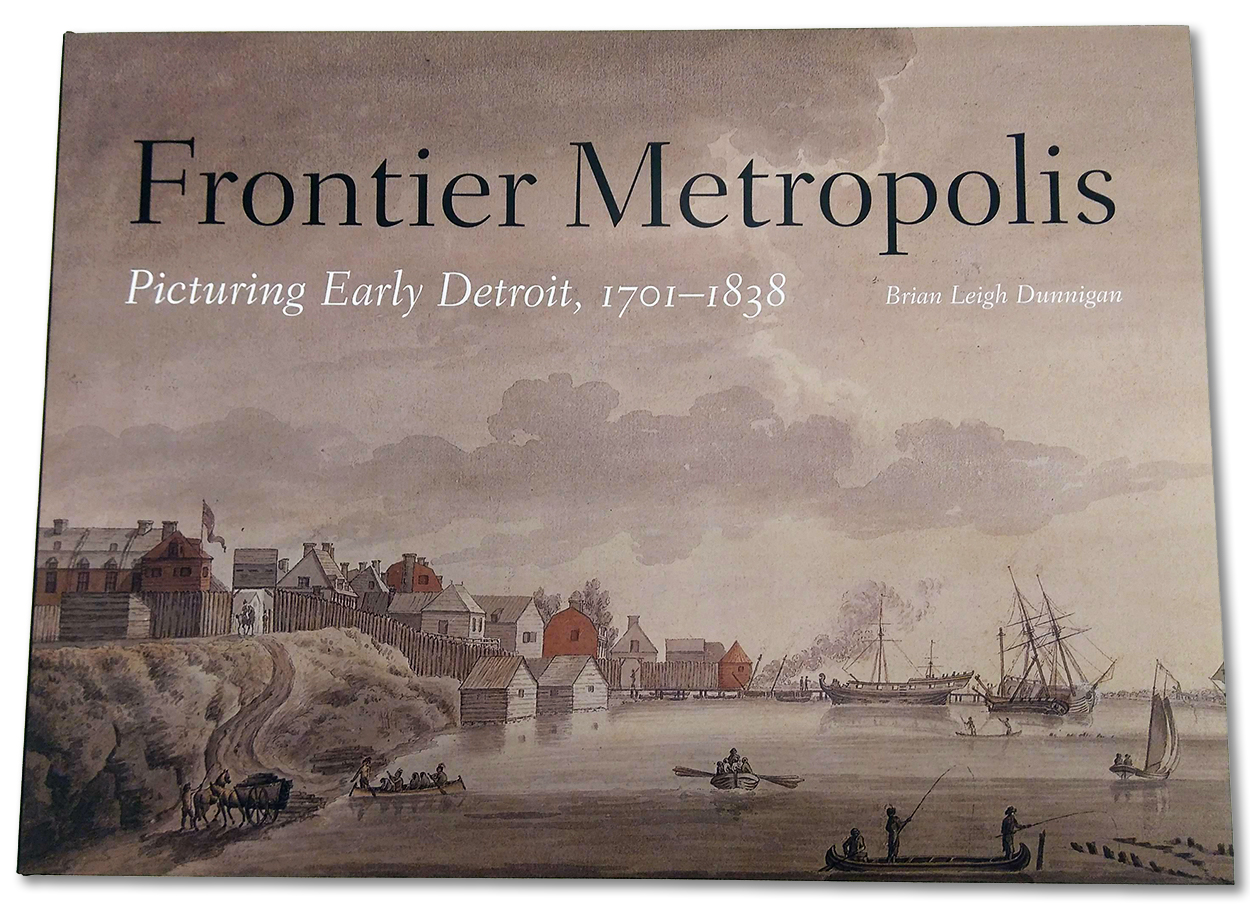 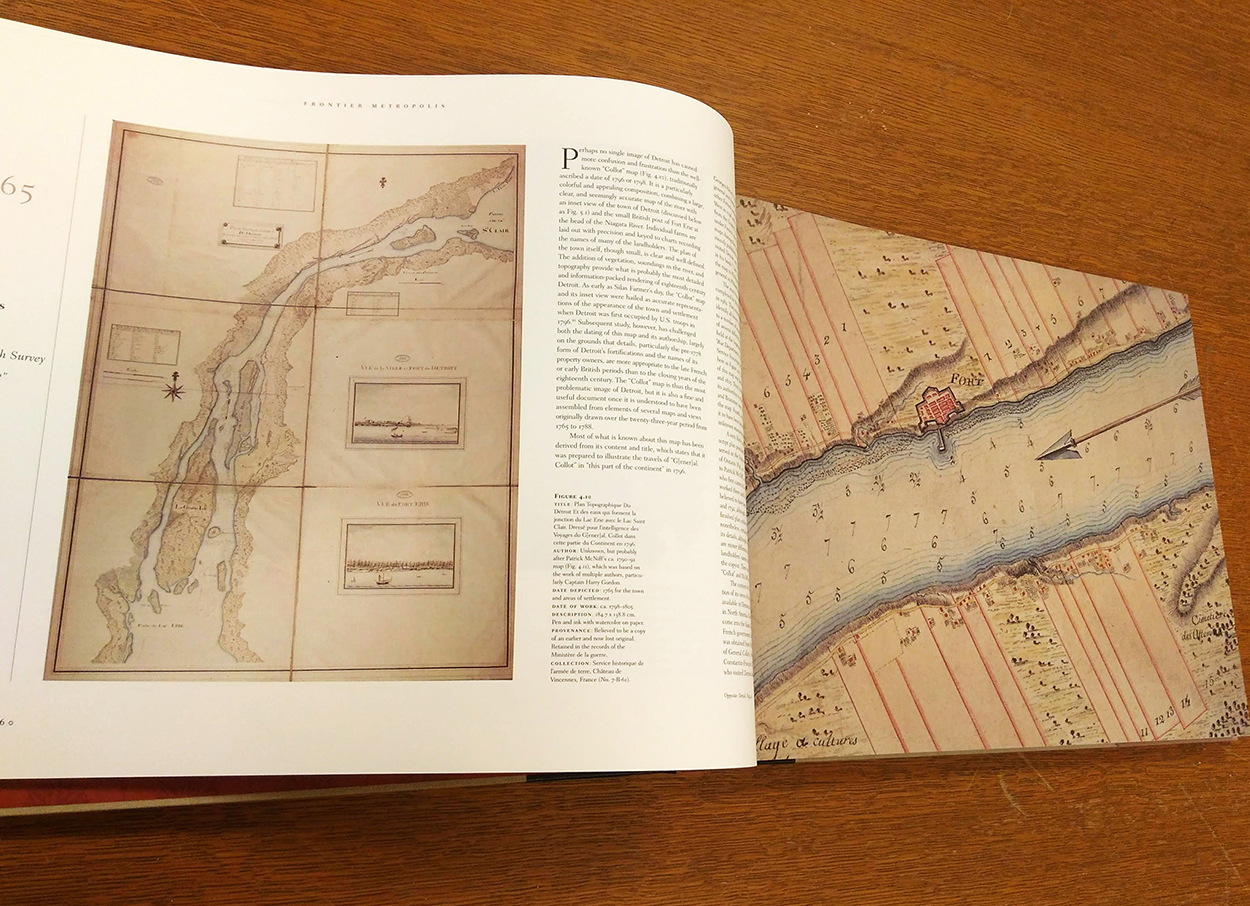 Ten chapters and two appendices serve to organize Dunnigan’s exploration of maps, sketches, paintings, and drawings produced by French, British, and American residents of Detroit. Chapter One, “Le Détroit, 1615-1701,” alludes to the French roots of the city and Detroit’s unique etymology as an anglicization of the French term for “the strait.” Maps produced during this period reflect a military or commercial impetus: charting the coast of the strait, sounding the Detroit River, and mapping transportation infrastructure like paths, roads, and wharfs. Dunnigan also highlights efforts of European explorers, military engineers, and Paris-based cartographers like Jacques-Nicolas Bellin to precisely measure and sketch the region, and how mapmakers sought to identify the territories of Indigenous societies like the Huron, Ottawa, Chippewa, and Potawatomi.

Detroit’s period of British rule (1760-1796) is discussed in chapters four and five, with ample material relating to Pontiac’s War and Revolutionary War era activity in and around Detroit. Chapter Five, “The Fortress of Detroit, 1775-1796” documents the enlargement of Detroit’s fortifications and defensive works. Dunnigan shows that while Detroit was spared the violence of the Revolution, the conflict nonetheless dramatically transformed Detroit by spurring large-scale building projects. Lumberjacks, laborers, and artificers (skilled craftsmen) constructed bakehouses, blockhouses, a citadel, laboratories, and ditches and palisades for a range of military purposes. Appendix B is a detailed, chronological list of significant improvements undertaken at Detroit between 1701-1838 and nicely complements this chapter. Appendix A lists every known image of Detroit produced between 1615-1838, useful for quickly referencing images by date and accessing them within the volume.

On July 11, 1796, the American flag flew over Detroit for the first time. The latter chapters of Frontier Metropolis track accelerated development in the newly American city and the attempts of Northwest Territory administrators and Washington D.C.-based officials to make sense of the new possession. Here Dunnigan’s emphasis shifts to the north side of the Detroit River, and his focus lingers on American Detroit for the remaining chapters. Particularly interesting is Chapter Seven, “Advisable to Improve the Arrangement of the Town, 1805-1811,” which considers the aftermath of the 1805 Great Fire of Detroit. With numerous maps of what is today downtown Detroit, Dunnigan guides us through attempts to reconfigure the city after the fire, such as the Woodward Plan, radial roads, and efforts to provide residents with “donation lots.” Those with an interest in architecture, urban planning, and city design will appreciate this section and the complexities of early 19th-century urban planning. Concluding chapters track the War of 1812 and post-war industrial growth in Detroit and neighboring localities. Stunning visualizations of Detroit’s harbors and wharfs, crowded with masted and steam-powered vessels, hint at Detroit’s future as a commercial center of the Midwest. 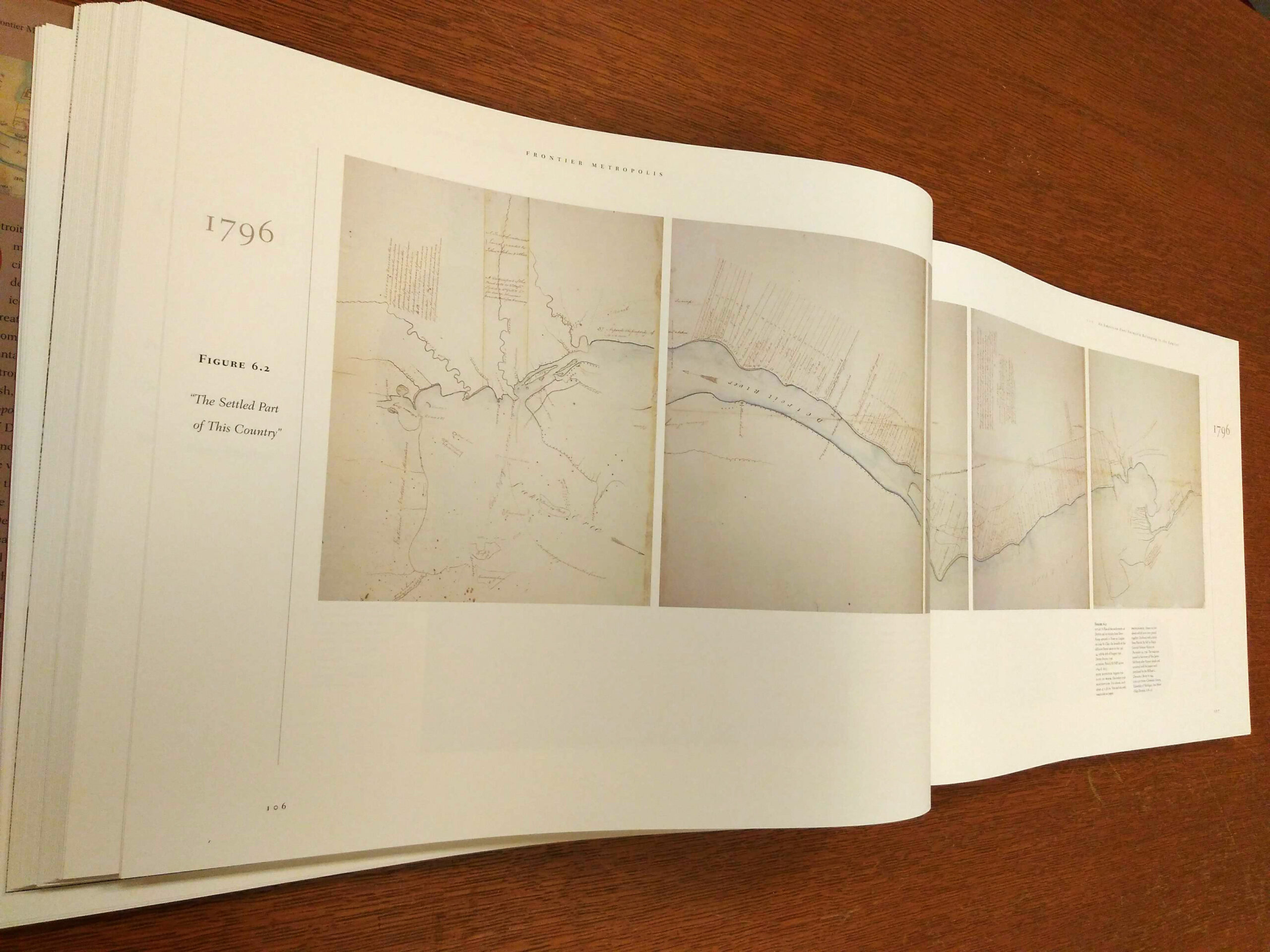 Dunnigan does not simply present these images, but contextualizes them for general and academic audiences. Information on authorship, provenance, and the current location of resources like maps and drawings are extremely useful for scholars looking to access the original materials, which are scattered throughout archives in North America and Europe. As a centralized source for these materials, and with expansive accompanying bibliography, Frontier Metropolis will be cited by generations of future historians and scholars. And beyond maps, sketches, and paintings, Dunnigan also includes select objects of material culture like wampum belts, manuscript deeds with totemic signatures, powder horns, and portraits of key figures in Detroit’s history – Native American, European, and American. Architectural plans like the iterations of Saint Anne de Detroit and Indian Council houses constructed by British and American officials provide glimpses of the built environment of the city.

In the introduction to Frontier Metropolis Dunnigan speculated that other graphic images of pre-1839 Detroit remained undiscovered, and that many were likely held in private collections and thus not available to the general public. This proved correct, and since 2001 nearly a dozen new items have emerged. In a January 2019 article published in Michigan’s Habitant Heritage, Dunnigan described nine newly-discovered “Detroit Stragglers” like a 1754 French-era map, fortification plans from the early 1800s, and illustrations of Detroit’s shoreline in 1820.

Capacious in scope, richly illustrated, and with considerable analytical and descriptive commentary, Frontier Metropolis: Picturing Early Detroit, 1701-1838 fills a large gap in our knowledge and understanding of Detroit’s early history and development. It is the work of an author intimately familiar with the history of Detroit and with comprehensive knowledge of archival materials from its early years. Published in 2001 to commemorate the tercentennial of the founding of the city, and with the assistance and support of the Wilkinson Foundation and the Ambassador Bridge, Frontier Metropolis remains in 2021 an essential work with much to offer a diverse readership with varied interests.

Copies of Frontier Metropolis are available on the Clements Library Marketplace.