Home » About » Blog » Celebrating Mother’s Day at the Clements Library

In the late afternoon of October 22nd, 1831, Maria Bradford gave birth to a “plump & fat” little girl whose “good lungs, made a great noise the minute after she was born.” “As soon as I heard the child cry,” she remembered, “I began to laugh.” Maria was admonished by the attending physician to neither laugh nor talk for several days so as not to “disturb [her] whole system,” but as we read her letter in the Bradford Family Papers we get a glimpse of the overpowering joy that came upon hearing her first-born child.

Maria was living in Cincinnati, Ohio, and was writing to her mother back east in Massachusetts when her daughter was one month old. “Though we have many kind friends; what are they all in comparison with you,” she asked, wishing for some maternal guidance now that she was in the thick of motherhood herself. “How much I have to say to you, and how many things I have to ask you!” She spent some of her early sleepless nights missing her mother and thinking of her. “How much, and how often I thought of you, particularly of late; how many nights I have laid awake thinking of you, and of the care and trouble I was to you; after I was first confined I used to lie and cry of nights; my nerves were weak; Claudius was not with me, as I had the nurse and felt so lonely; then I thought of my child, and that 27 years ago I was in your arms, just as helpless, and dependent, so you see that every day I love you more, and I often think I have not done enough, no not half enough to repay your kindness and affection.”

She named her baby Sarah, after her mother, and felt deeper than ever the ties that bound them all together. “I now know what it is to be a mother,” she confided, “and I hope and pray to God that I may make as good a mother as you have been to me; and I hope my child will love me as well as I do you.”

Letters such as these remind us of the emotional support women lend each other during the transition into motherhood, even if they can’t be physically present. “My time is so entirely occupied that it seems as if I had no time to do any thing,” Maria sighed, but she still made the time to write to her mother and share her love.

This Mother’s Day, the Clements Library offers up this bouquet of beautiful floral bindings from some of our rare seventeenth-century books as a token of respect and gratitude for mothers near and far, past and present. May their time, today at least, be “so entirely occupied” by joyful celebrations. 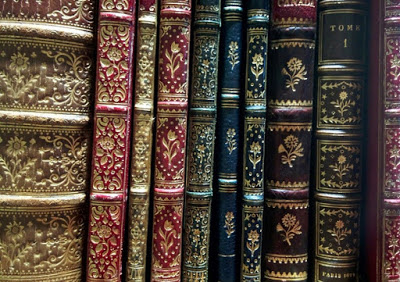