While serving as a drummer with the 61st Ohio Infantry Regiment during the Civil War, Ohio-native Peter Henry “Hank” Musty wrote many a letter to his friends and family back home.  Hank was most often in communication with his parents and his brother Francis.  He would occasionally send letters and illustrations depicting scenes of camp life.  In one such letter to Francis, written sometime between April and May of 1863, Hank confided that he received “a valentine in a letter from 719y 298sb59829, and it was a mighty nice one too and I send [sic.] one to her, it was a nice large one and no doubt you will hear about it.”

Hank was fond of using encryption in his letters; he employed a simple substitution code in which numbers 1 through 9 corresponded to letters of the alphabet.  Once deciphered, 719y 298sb59829 translated to Mary Ernsburger, a fellow resident of Greensburg, Ohio, who seems to have harbored a crush on the young musician.  Stating that he “never intended to send any [Valentine] to anyone,” Hank seemed to imply that he returned Mary’s gesture out of politeness.  After imploring Francis to notify him if he heard anybody discussing his “nice large” valentine, Hank also enquired about what “Pip & 74th29 [i.e. mother]” may have had to say regarding the matter.  In the last line of the letter Hank admitted that he “can’t quite understand mother’s hints in her letters” and hoped that Francis might help him deduce what their mother truly thought of his exchange with Mary.

Tucked away among the letters and illustrations in the Peter H. Musty Papers is an undated, commercially-produced Valentine’s Day print that may have been the gift Hank received from Mary.  Depicting a man playing guitar whilst serenading a woman on a balcony, this charming little valentine contains the text of a romantic poem which reads:

“My song is mute, the strain
Which melodized each line,
My sentiments convey
To thee my Valentine.” 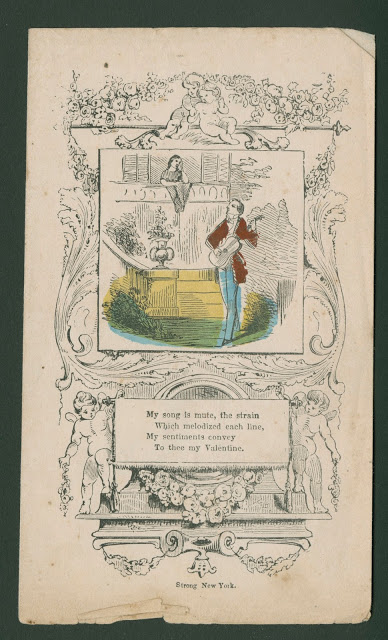 The Civil War is one of the first military conflicts in which a significant number of participants were letter-writers and diary-keepers; Hank Musty was one of many thousands of American soldiers who were able to trade Valentine’s Day gifts and/or maintain passionate correspondence with their sweethearts over the course of the war.  Hank returned to Greensburg in 1864 after being discharged for medical reasons.  We are currently uncertain as to whether or not he and Mary pursued a relationship upon his return.  Regardless of the outcome, the record of their exchange serves as a fine example of a soldier’s long-distance brush with the romance and social dynamics of the holiday. 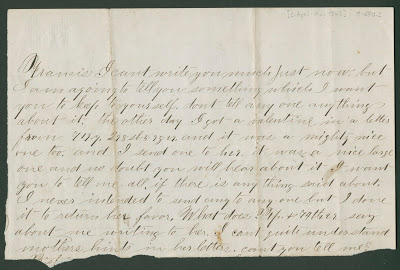 Letter transcription: “Francis I can’t write you much just now, but I am agoing to tell you something which I want you to keep to yourself.  Don’t tell any one anything about it.  The other day I got a valentine in a letter from 719y 298sb59829 and it was a mighty nice one too, and I send one to her.  It was a nice large one and no doubt you will hear about it I want you to tell me all if there is any thing said about.  I never intended to send any to any one but I done it to return her favor.  What does Pip & 74the9 say about me writing to her.  I can’t quite understand mothers hints in her letters.  Can’t you tell me? … [rest of letter torn away]”