Home » Public Programs » Online Exhibits » “So Once Were We”: Death in Early America » Confronting Mortality 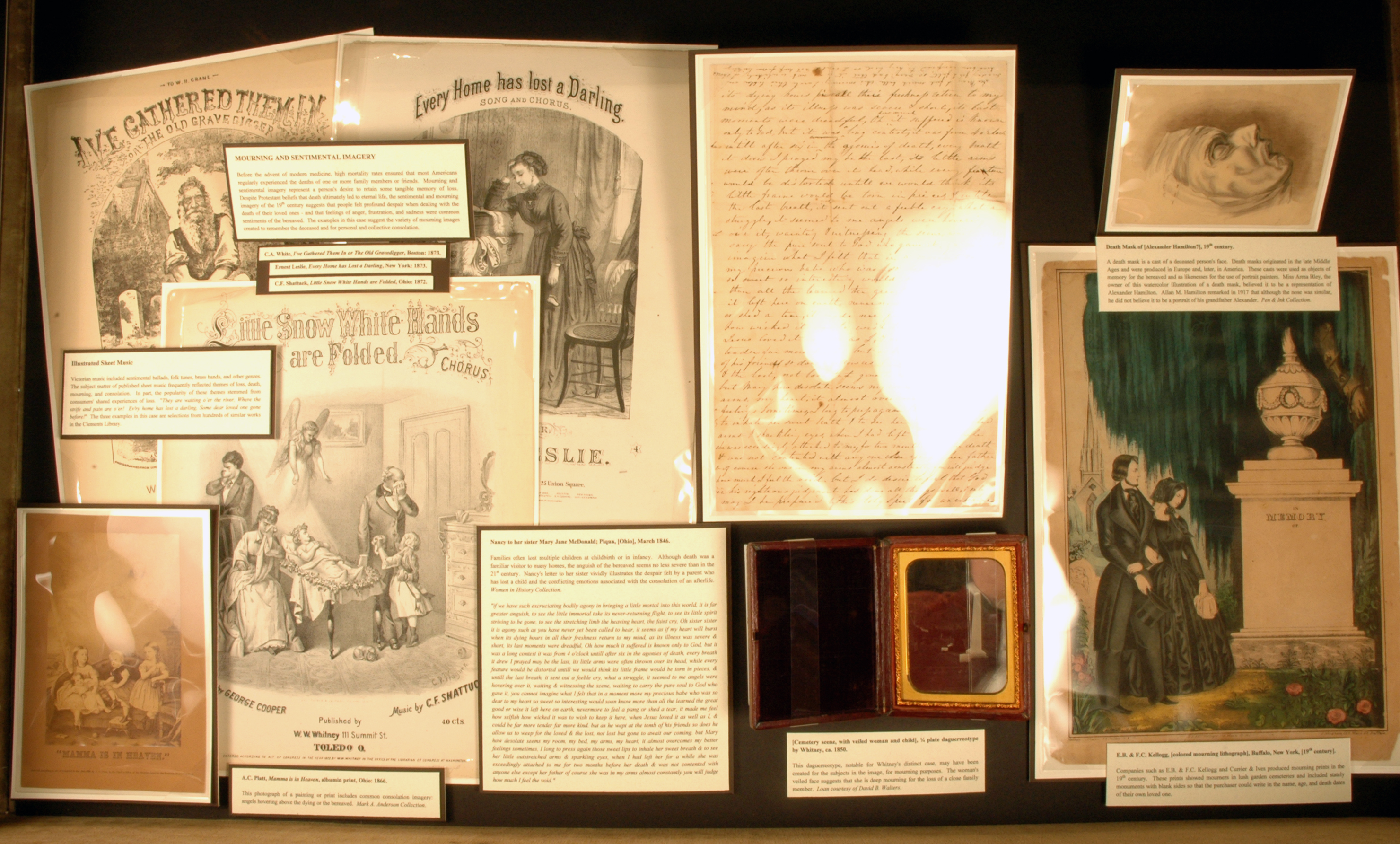 Death was a frequent occurrence in early America.  Wars, murders, suicides, illnesses, and diseases contributed to high mortality rates.  Small pox, yellow fever, and cholera epidemics destroyed large populations within cities.  Americans dealt with these frequent deaths with religion and attempted to confront them with medicine.  The following examples offer a small sampling of many thousands of items in the Clements Library related to social, religious, and medical aspects of death and dying.

First published in the late 17th century, the New England Primer was a common children’s English book.  The alphabet woodcuts displayed here reflect the violence of the natural world and the brevity of life.  While the content of these illustrations may appear grim, Calvinist parents in New England were confronted with the difficult knowledge of high infant mortality rates and the potential damnation of unregenerate children.  These works intended to teach and remind children of this danger. The New-England Primer Improved, or, An Easy and Pleasant Guide to the Art of Reading, Boston: 1792. The New-England Primer Improved : For the More Easy Attaining of the True Reading of English, Albany: 1809. The New-England Primer, or, An Easy and Pleasant Guide to the Art of Reading, Concord, New Hampshire: 1812. 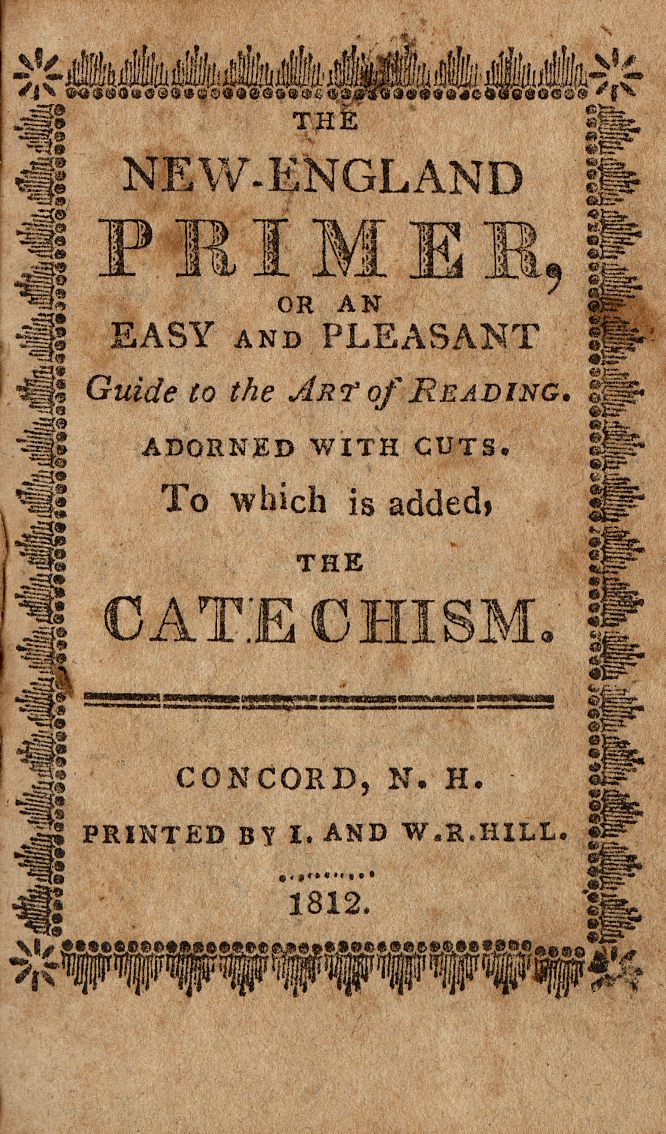 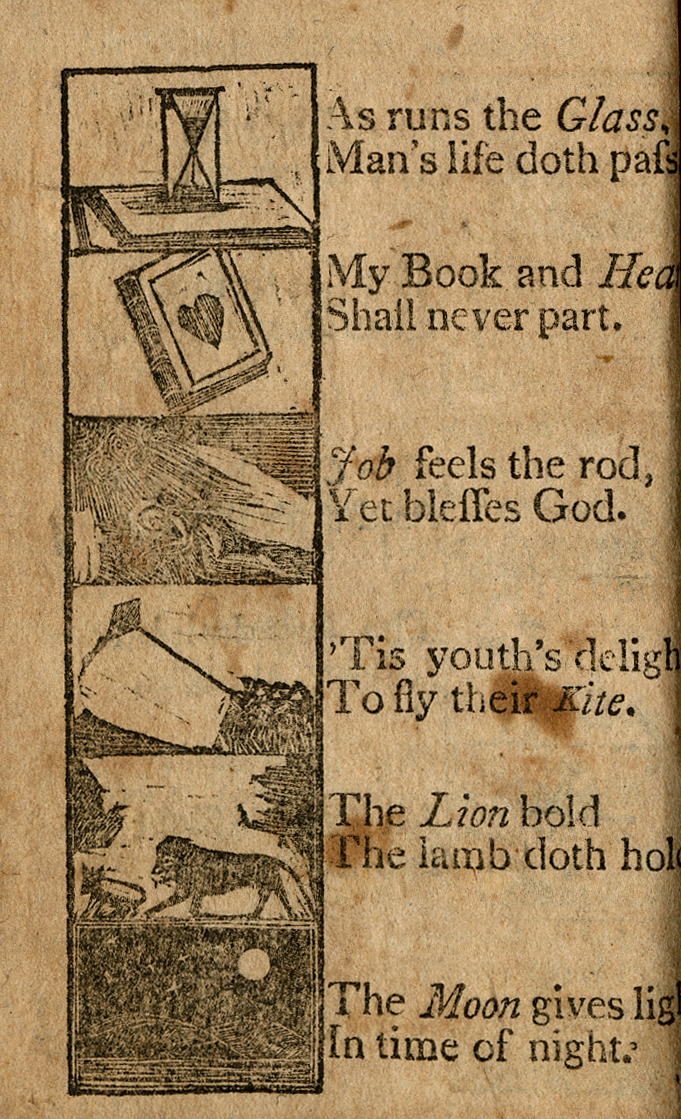 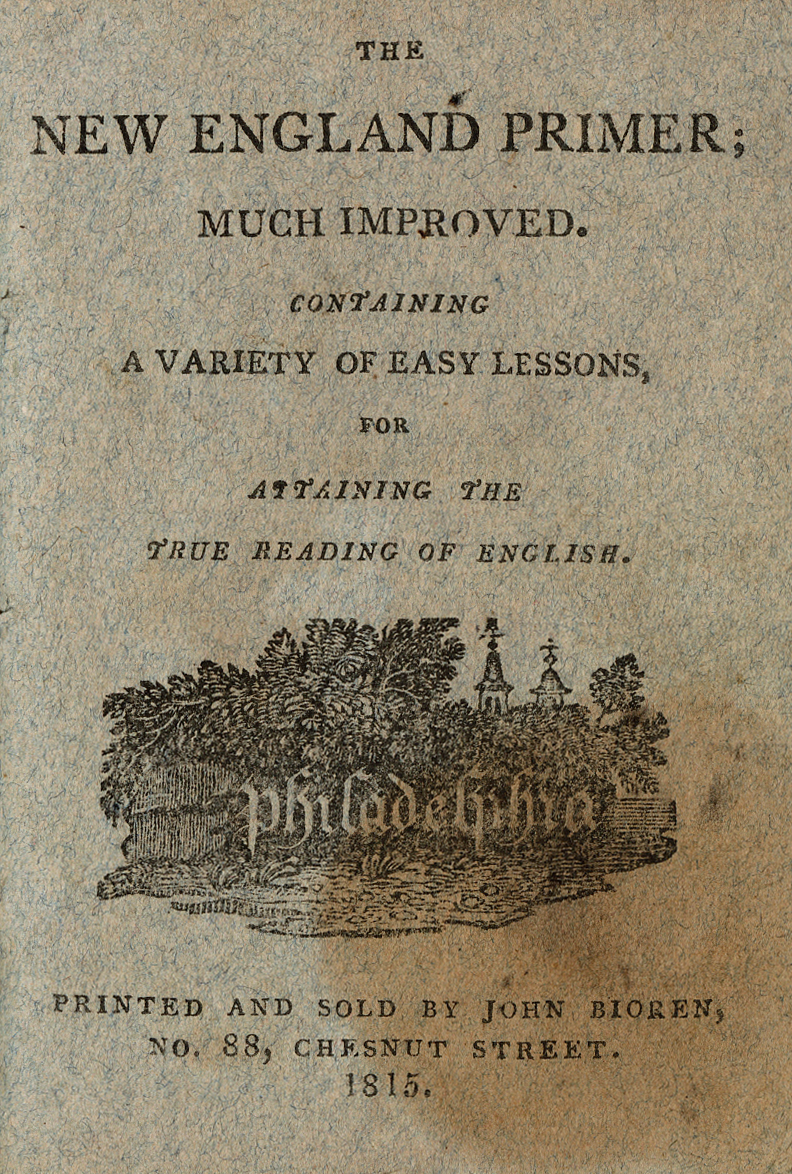 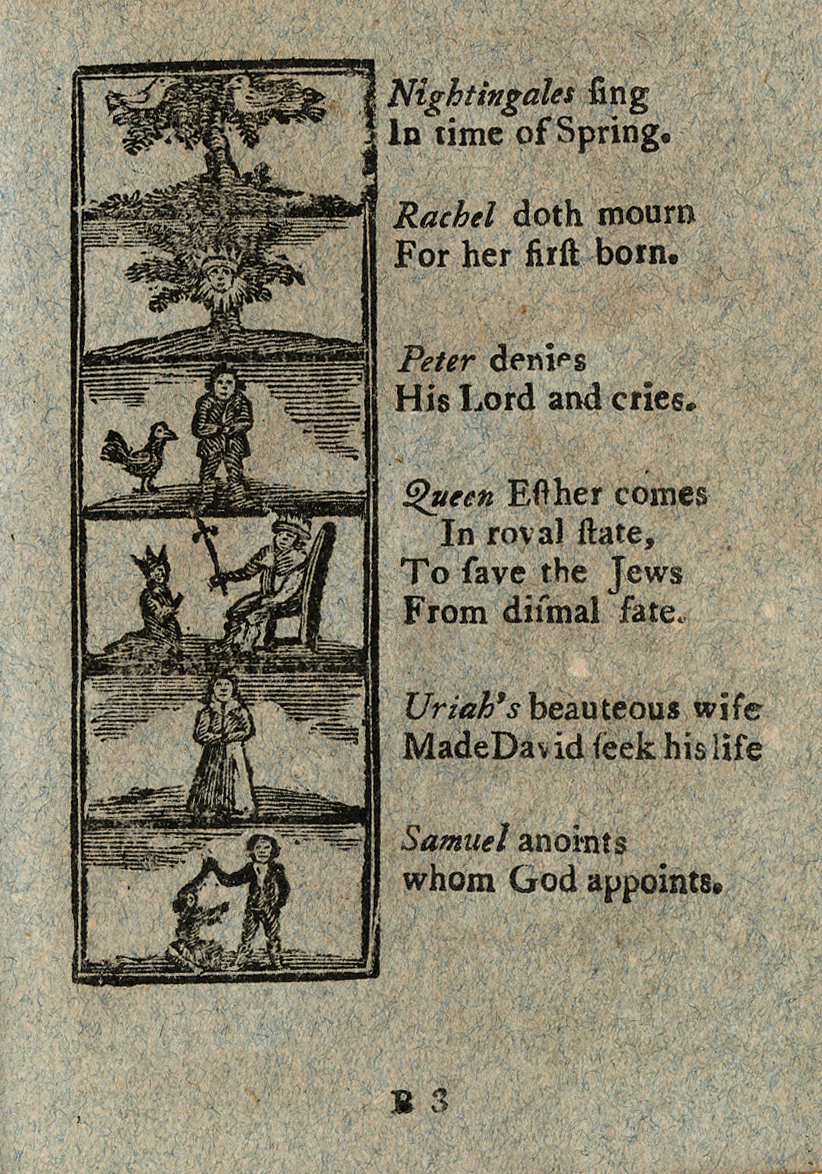 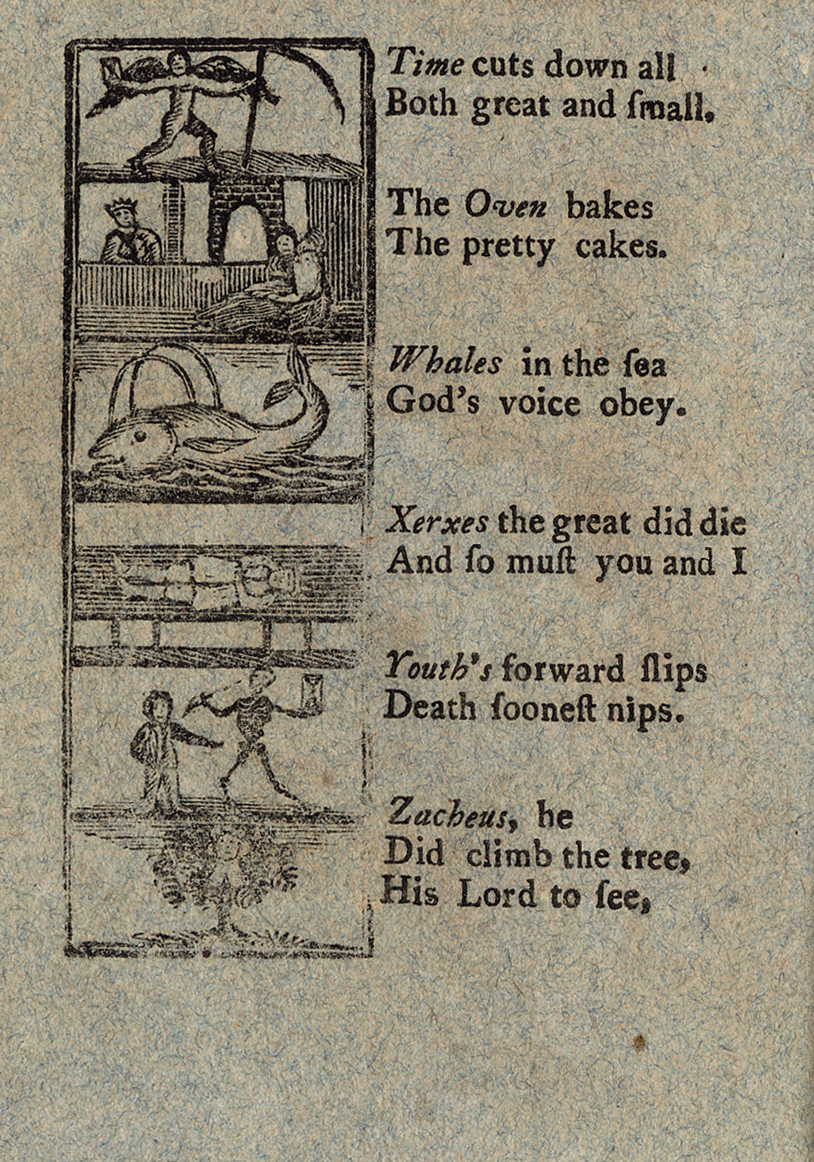 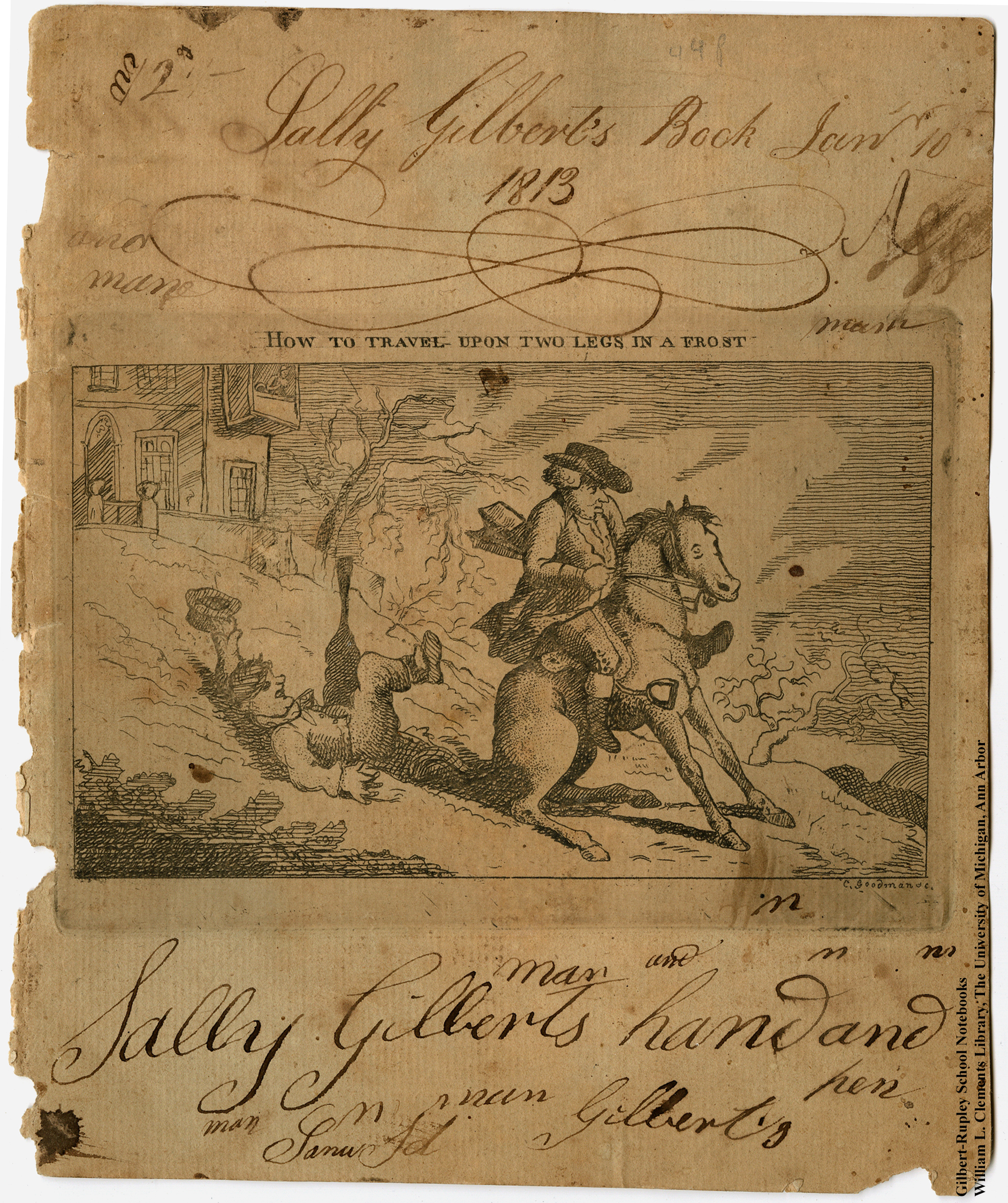 Families often lost multiple children at childbirth or in infancy.  Although death was a familiar visitor to many homes, the anguish of the bereaved seems no less severe than in the 21st century.  Nancy’s letter to her sister vividly illustrates the despair felt by a parent who has lost a child and the conflicting emotions associated with the consolation of an afterlife.

“if we have such excruciating bodily agony in bringing a little mortal into this world, it is far greater anguish, to see the little immortal take its never-returning flight, to see its little spirit striving to be gone, to see the stretching limb the heaving heart, the faint cry, Oh sister sister it is agony such as you have never yet been called to hear, it seems as if my heart will burst when its dying hours in all their freshness return to my mind, as its illness was severe & short, its last moments were dreadful, Oh how much it suffered is known only to God, but it was a long contest it was from 4 o’clock untill after six in the agonies of death, every breath it drew I prayed may be the last, its little arms were often thrown over its head, while every feature would be distorted untill we would think its little frame would be torn in pieces, & untill the last breath, it sent out a feeble cry, what a struggle, it seemed to me angels were hovering over it, waiting & witnessing the scene, waiting to carry the pure soul to God who gave it, you cannot imagine what I felt that in a moment more my precious babe who was so dear to my heart so sweet so interesting would soon know more than all the learned the great good or wise it left here on earth, nevermore to feel a pang or shed a tear, it made me feel how selfish how wicked it was to wish to keep it here, when Jesus loved it as well as I, & could be far more tender far more kind. but as he wept at the tomb of his friends so does he allow us to weep for the loved & the lost, not lost but gone to await our coming. but Mary how desolate seems my room, my bed, my arms, my heart, it almost overcomes my better feelings sometimes, I long to press again those sweet lips to inhale her sweet breath & to see her little outstretched arms & sparkling eyes, when I had left her for a while she was exceedingly attached to me for two months before her death & was not contented with anyone else except her father of course she was in my arms almost constantly you will judge how much I feel the void.” 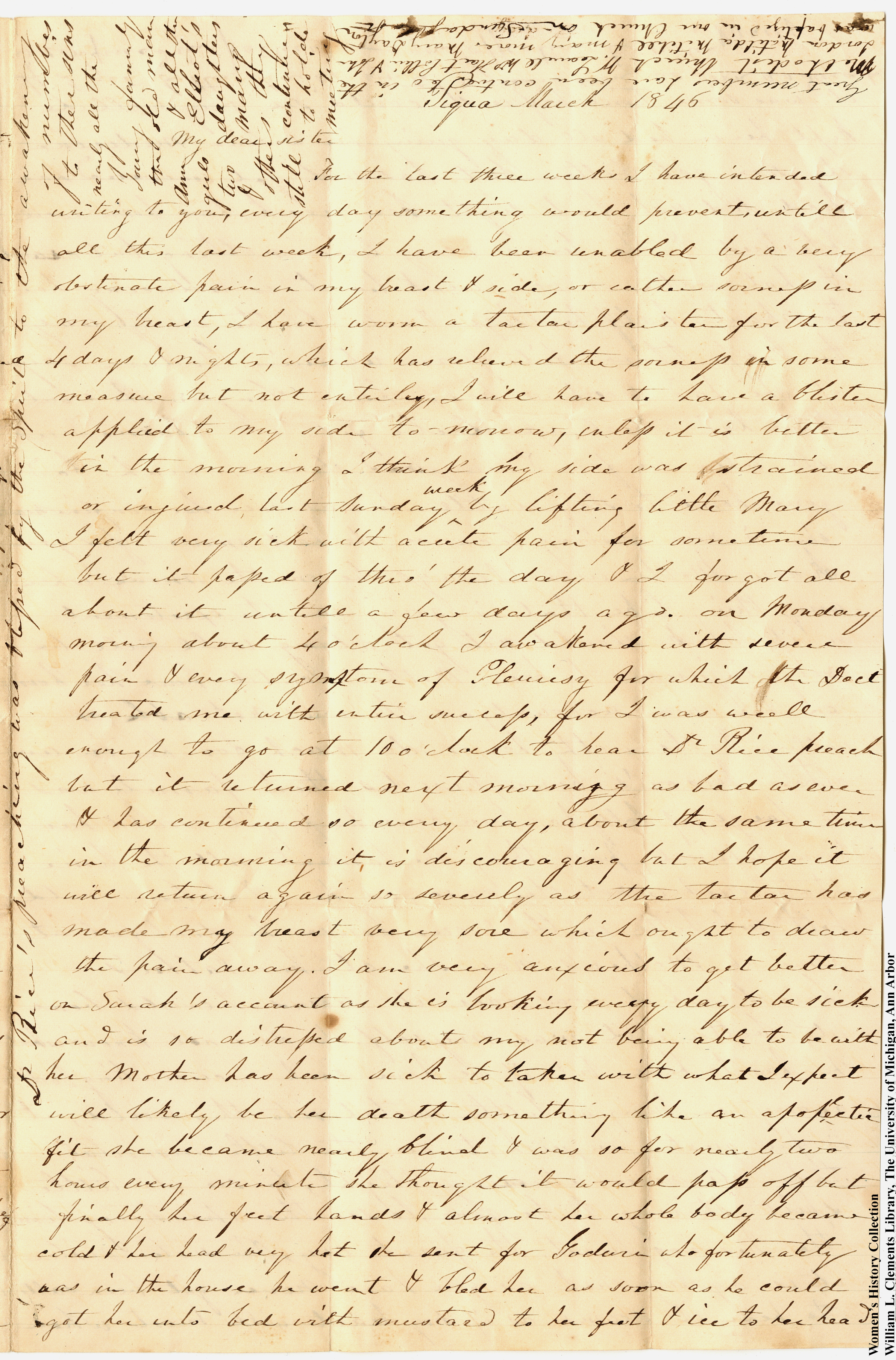 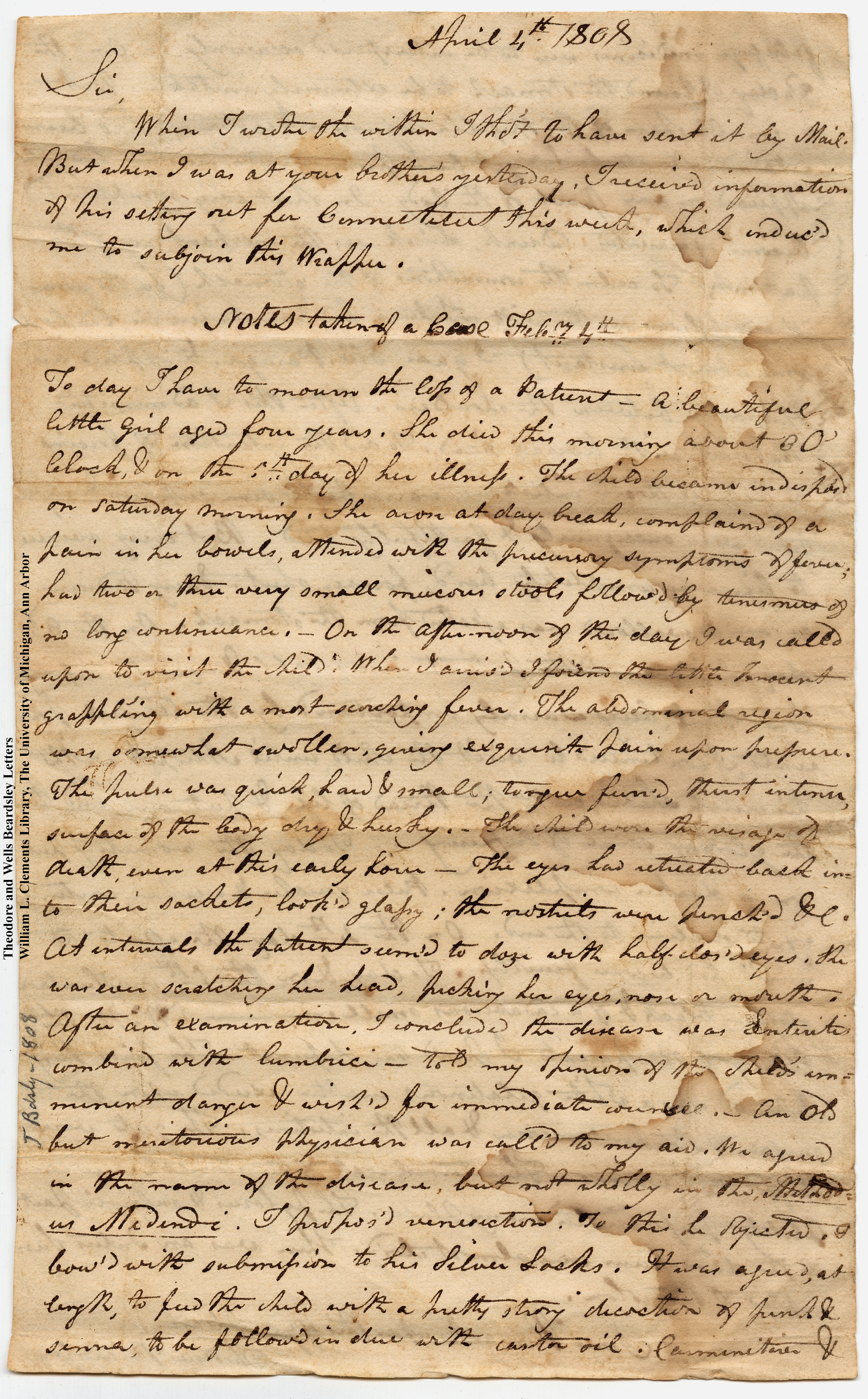 “After this I administer’d Calomel with liberal hand.  To aid the intention of forcing a passage thro’ the intestines, warm bath, semicupium & [injections?] were successively & faithfully tried.  But every avenue to life was completely bar’d, forever shut.  Every Medicine as soon as swallow’d was ejected from the stomach.  On the 3d. day I pronounc’d the patient irrecoverable & requested dismission.  But being warmly importun’d by the tearful parents, I continued to visit the child, until Atropos, with his cruel shears, cut the thread of life, & put an end to the gloomy scene of suffering.  To day the vomiting put on a darker complexion.  Pulse quicker & weaker, continuing to decline to the end.  On the 4th day the efforts to vomit had become fruitless.  To day, & on the 5th. involuntary stools – black & of a cadaverous smell.  With the liberty of the parents I open’d the defunct.  The first thing I observ’d was a white gelatinous matter exuded upon the surface of the peritonaeum & all the intestines.  The guts were stuff’d with worms.  The internal coats of the somach were completely perforated in many places.  The pylorus & superior part of the duodenum were almost clos’d.  There was an Intus Susceptis of the colon.”

Absalom Jones and Richard Allen, A Narrative of the Proceedings of the Black People During the Late Awful Calamity in Philadelphia, in the Year, 1793 : and a Refutation of some Censures, Thrown Upon Them in Some Late Publications, Philadelphia: 1794.

African Methodist Episcopal Church founder Richard Allen and African Episcopal Church of St. Thomas founder Absalom Jones published this pamphlet to illustrate the vital role of the black community during the 1793 yellow fever epidemic in Philadelphia.  They cared for the sick and the dead in the city.  This pamphlet is also one of the earliest political tracts produced by African Americans.

James A. Marshall Diary: 1853.
James A. Marshall’s 1853 travel diary includes the following passage on a yellow fever outbreak in Natchez and Vicksburg, Mississippi.  Marshall believed that proper diet would help prevent the sickness; unfortunately, the fever killed him later in the year 1853.

On board the Steamer Frank Lyon enroute for the farther South, I shall not stop at Natchez on account of the Quarantine which has been established both at N. and Vicksburg on account of the prevalence of yellow fever at New Orleans, and where I would be obliged to be some days should I stop.  Most people are fearful of going down the river on account of the fever, but I am convinced that there is little if any danger to any one who used due caution in diet &c. The deaths in the city are now ranging above 150 per day, and all who can by any means leave are doing so.” Before the advent of modern medicine, high mortality rates ensured that most Americans regularly experienced the deaths of one or more family members or friends.  Mourning and sentimental imagery represent a person’s desire to retain some tangible memory of loss.  Despite Protestant beliefs that death ultimately led to eternal life, the sentimental and mourning imagery of the 19th century suggests that people felt profound despair when dealing with the death of their loved ones – and that feelings of anger, frustration, and sadness were common sentiments of the bereaved.  The examples in this case suggest the variety of mourning images created to remember the deceased and for personal and collective consolation.

A death mask is a cast of a deceased person’s face.  Death masks originated in the late Middle Ages and were produced in Europe and, later, in America.  These casts were used as objects of memory for the bereaved and as likenesses for the use of portrait painters.  Miss Arma Bley, the owner of this watercolor illustration of a death mask, believed it to be a representation of Alexander Hamilton.  Allan M. Hamilton remarked in 1917 that although the nose was similar, he did not believe it to be a portrait of his grandfather Alexander. 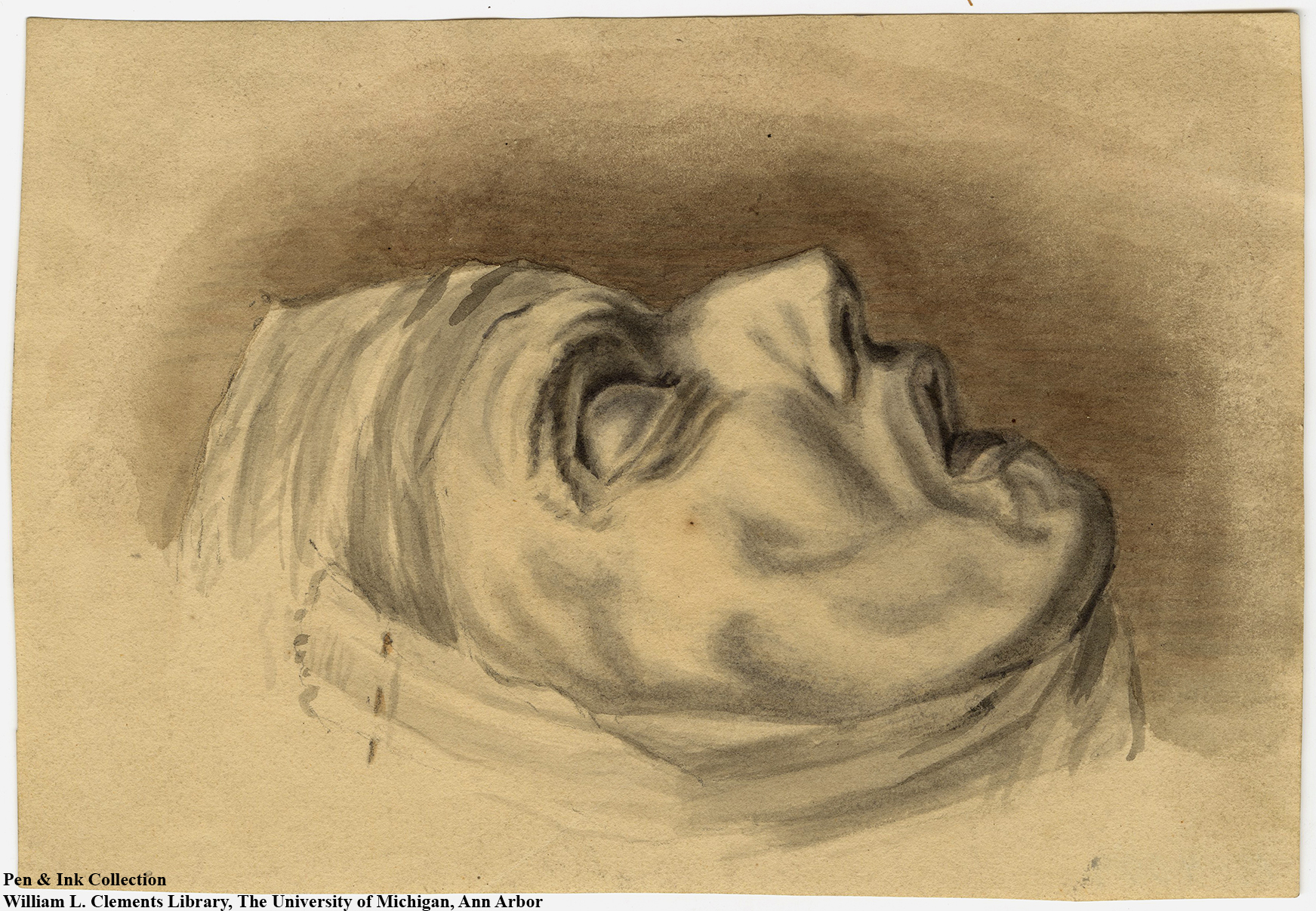 Companies such as E.B. & F.C. Kellogg and Currier & Ives produced mourning prints in the 19th century.  These prints showed mourners in lush garden cemeteries and included stately monuments with blank sides so that the purchaser could write in the name, age, and death dates of their own loved one. Victorian music included sentimental ballads, folk tunes, brass bands, and other genres.  The subject matter of published sheet music frequently reflected themes of loss, death, mourning, and consolation.  In part, the popularity of these themes stemmed from consumers’ shared experiences of loss.  “They are waiting o’er the river, Where the strife and pain are o’er!  Ev’ry home has lost a darling, Some dear loved one gone before!” (Every Home has Lost a Darling, 1873)  The following three examples are selections from hundreds of similar works in the Clements Library. 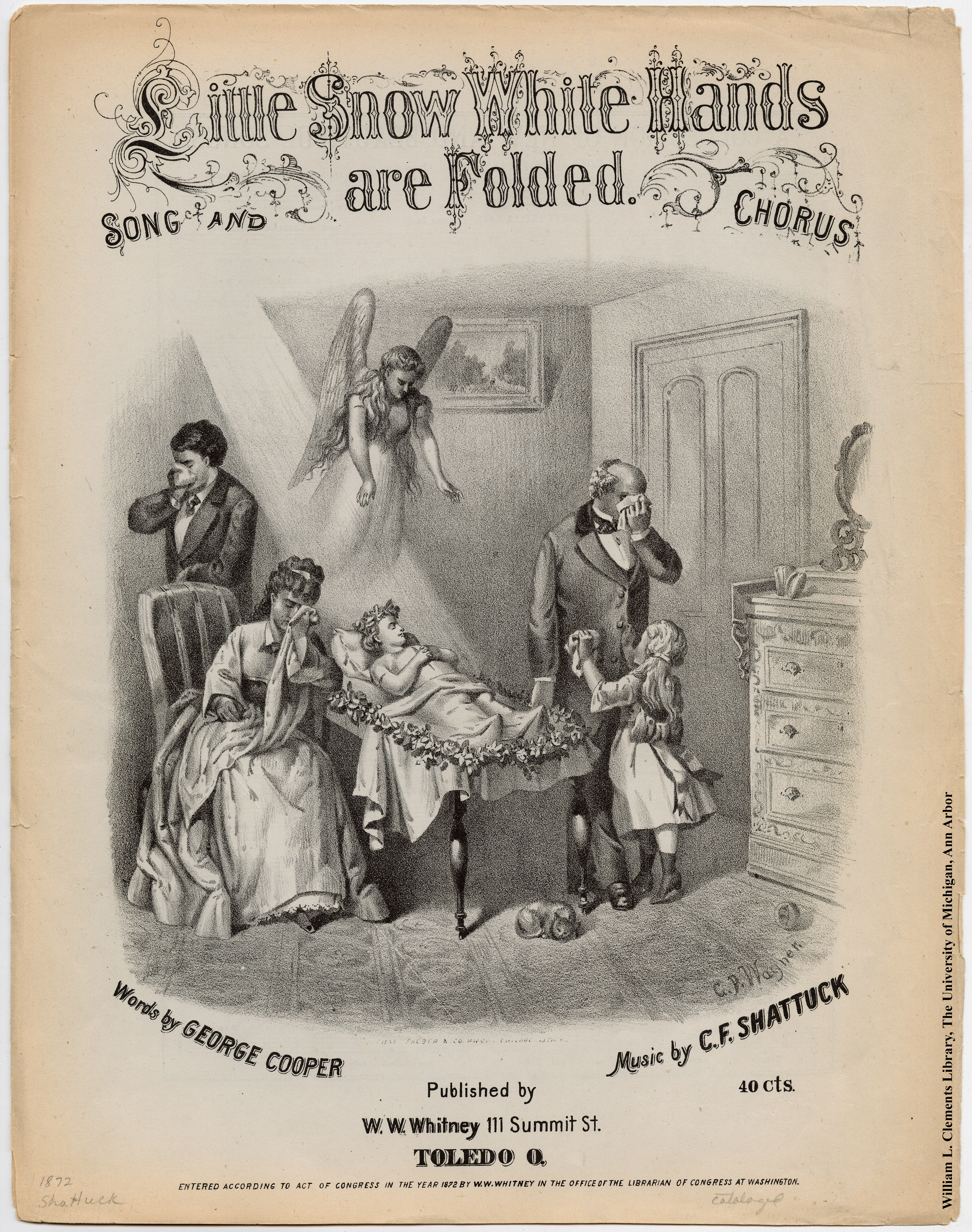 Rembrandt Peale created the massive 138″ x 281″ painting The Court of Death in 1819 and 1820.  From 1820 to 1823, the painting toured the eastern United States and its larger-than-life-size neoclassical figures drew over 30,000 paying customers to view it.  Gardiner Quincy Colton purchased the painting to capitalize on the successes of the tour, had it reproduced using color lithography, and sold copies for $1.00.  Colton later sold the printing plates to Caldwell & Company, who printed the advertisement below offering subscription for chromolithographs of The Court of Death by Peale and The Last Supper by Leonardo da Vinci.  The original painting changed hands several times before George H. Scripps donated it to the Detroit Institute of Arts in 1885.

The content of this allegorical work reflects early 19th-century Unitarian beliefs about the moral responsibility of individuals – in this case, Peale’s own belief in the immorality of war and intemperance.  The following passage is quoted from American Paintings in the Detroit Institute of Arts : Works by Artists Born Before 1816 (Founders Society, Detroit Institute of Arts, 1991):

“Peale composed a frieze of figures flanking the central hooded figure of Death within a dark grotto.  At his feet lies the body of a man struck down in the prime of life, his head and feet touching, in Peale’s own words, the ‘waters of oblivion.’  To the left are the kneeling figure of pleasure and her entourage:  Remorse, Intemperance, Frenzy, and Suicide.  Beyond is ‘a darkened group of disease and misery, the victims of luxury and intemperate pleasure’:  Gout, Dropsy, and Apoplexy; Hypochondria, Fever, and Consumption.  At the right are the agents and attendants of war.  A warrior – ‘depicted with a countenance agitated by ambition and revenge’ – strides past his victim and over an infant and its widowed mother; Want, Dread, and Desolation complete the scene.  In the foreground stands ‘venerable Old Age, supported by Virtue,’ which Peale meant to personify also hope and religion…  Peale’s point, then, is that ‘Death has no terror in the eyes of Virtuous Old Age, and of Innocence, Faith, and Hope’.” 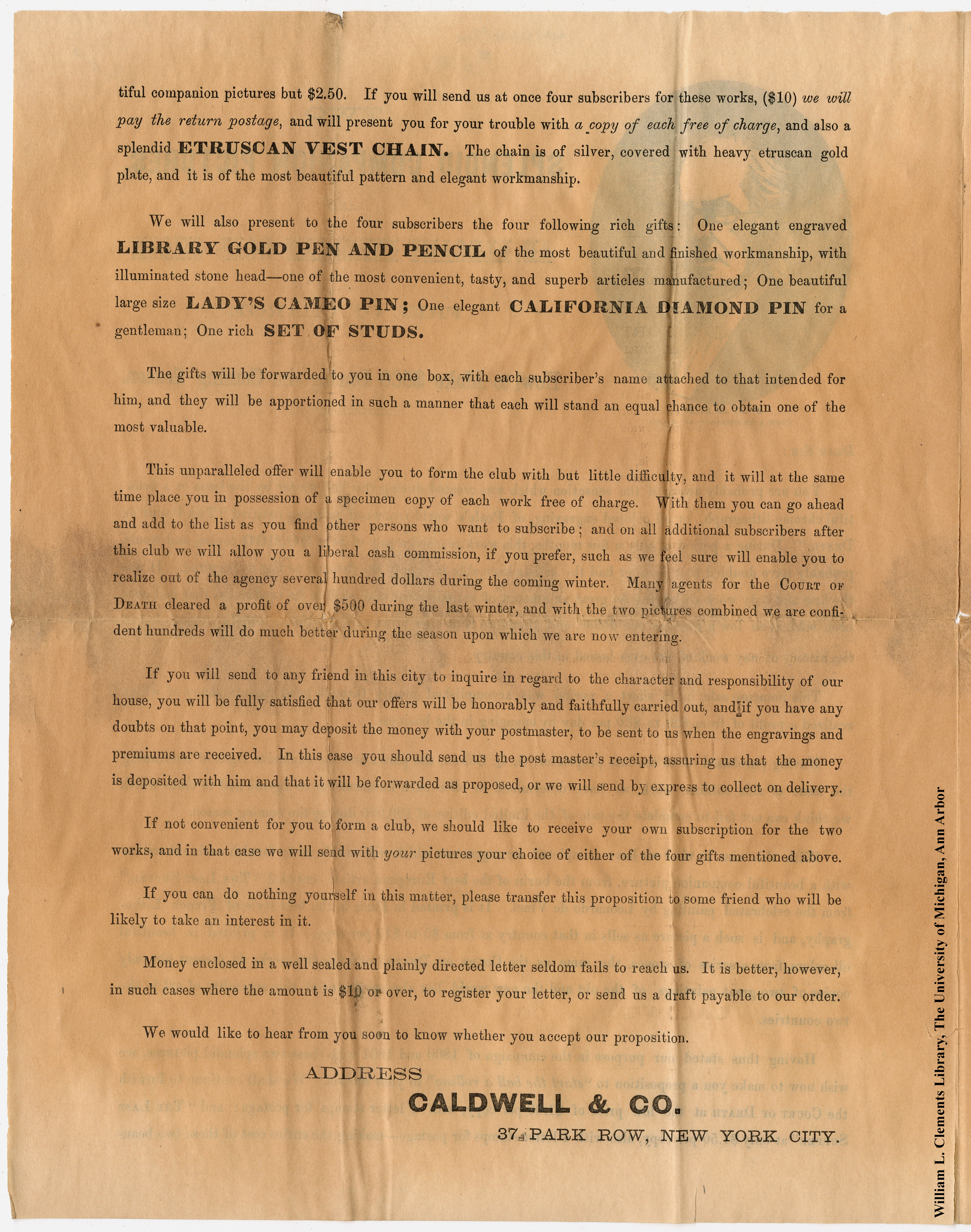