Home » Public Programs » Online Exhibits » “So Once Were We”: Death in Early America » Post-Mortem Photography: Examples by Photographic Type 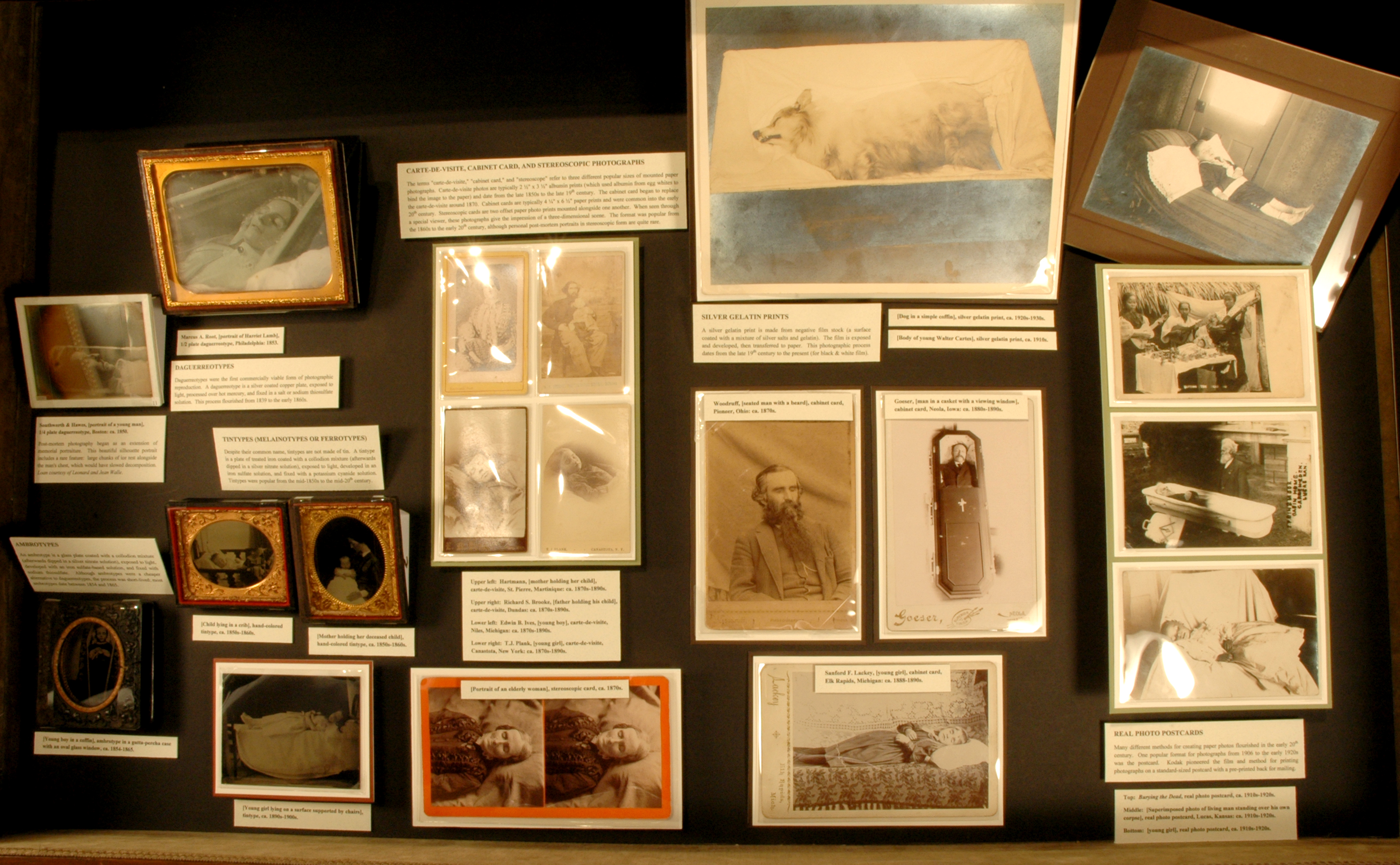 Unless otherwise specified, the examples below belong to the Mark A. Anderson Collection of Post-Mortem Photography.

Daguerreotypes were the first commercially viable form of photographic reproduction.  A daguerreotype is a silver coated copper plate, exposed to light, processed over hot mercury, and fixed in a salt or sodium thiosulfate solution.  This process flourished from 1839 to the early 1860s. 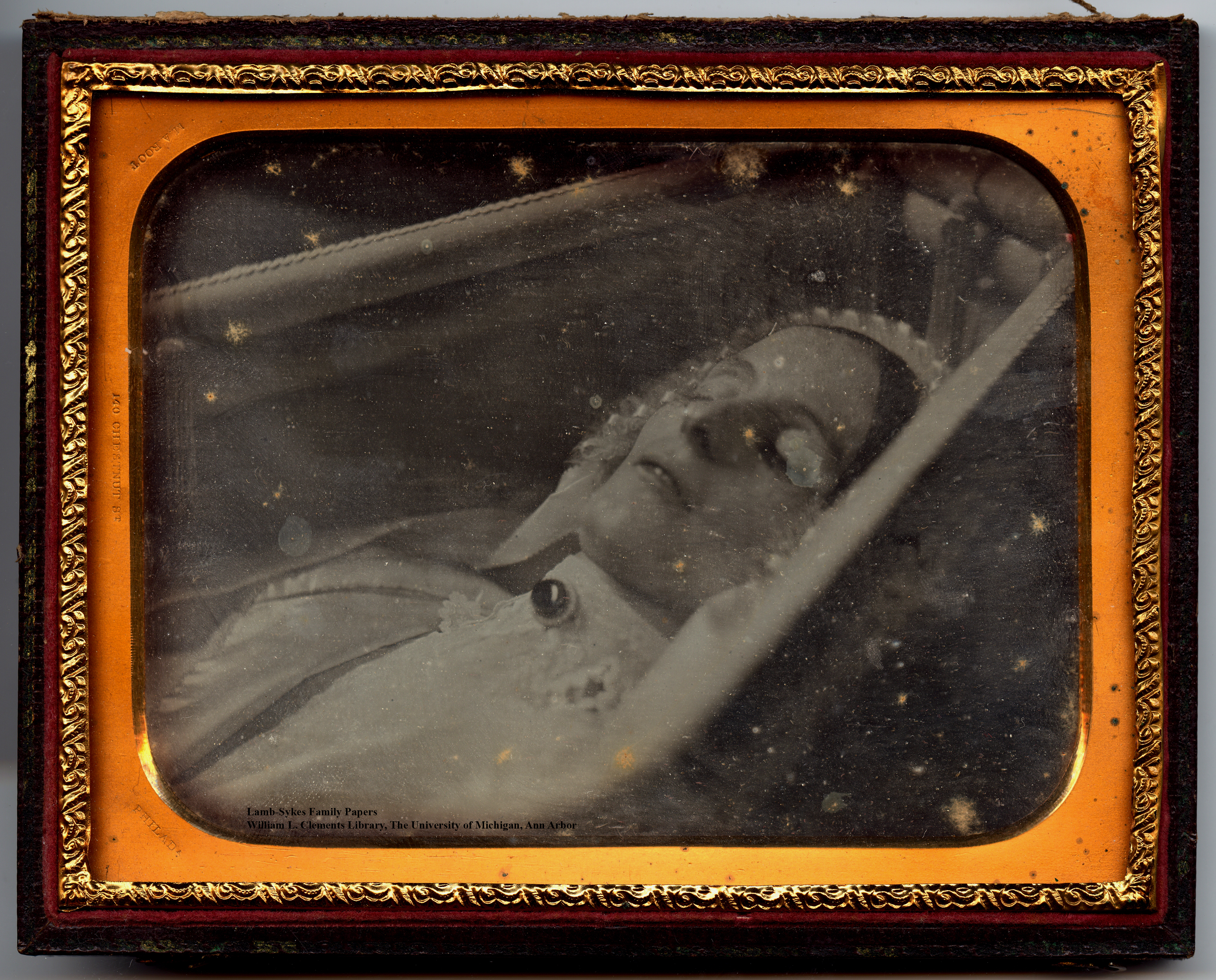 An ambrotype is a glass plate coated with a collodion mixture (afterwards dipped in a silver nitrate solution), exposed to light, developed with an iron sulfate-based solution, and fixed with sodium thiosulfate.  Although ambrotypes were a cheaper alternative to daguerreotypes, the process was short-lived; most ambrotypes date between 1854 and 1865. 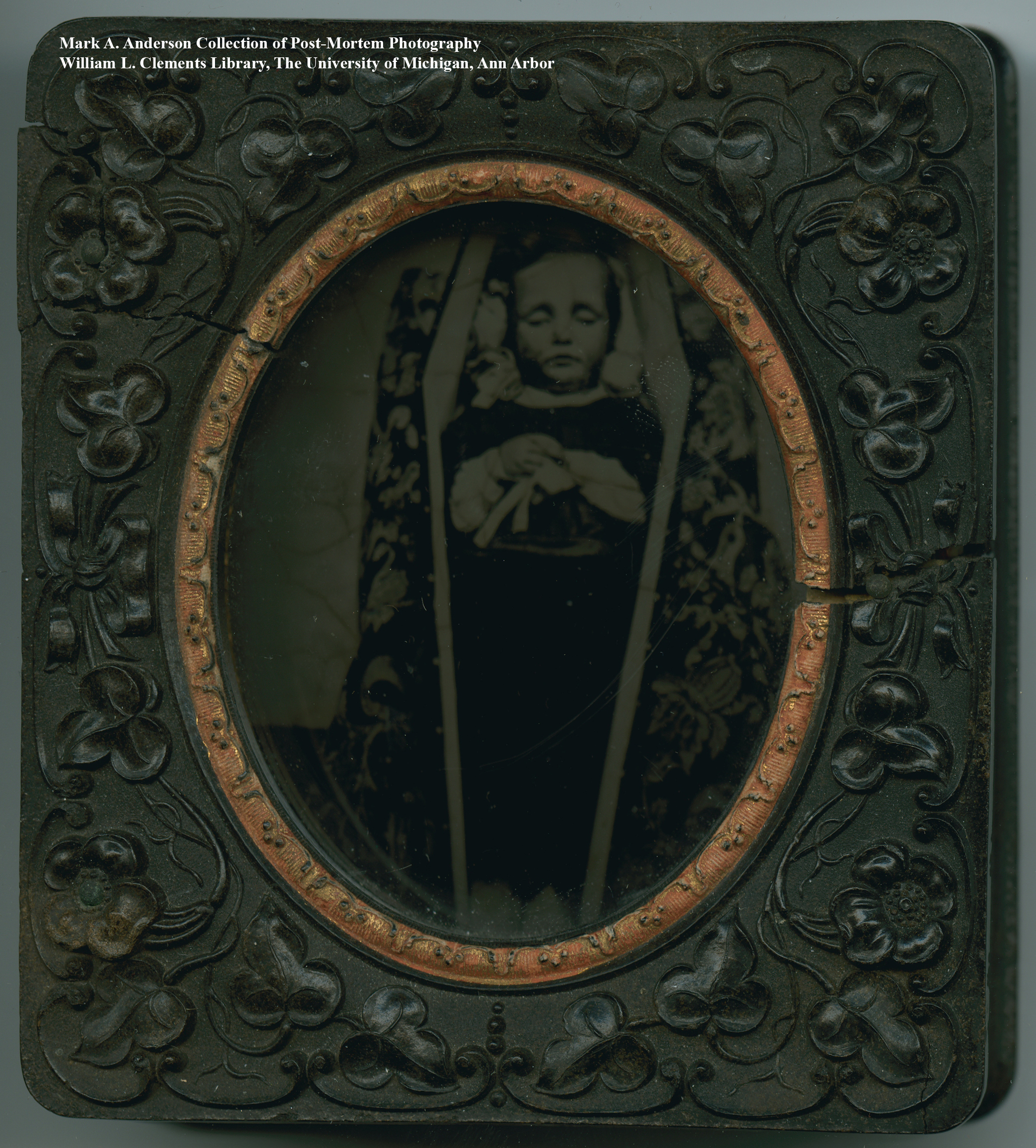 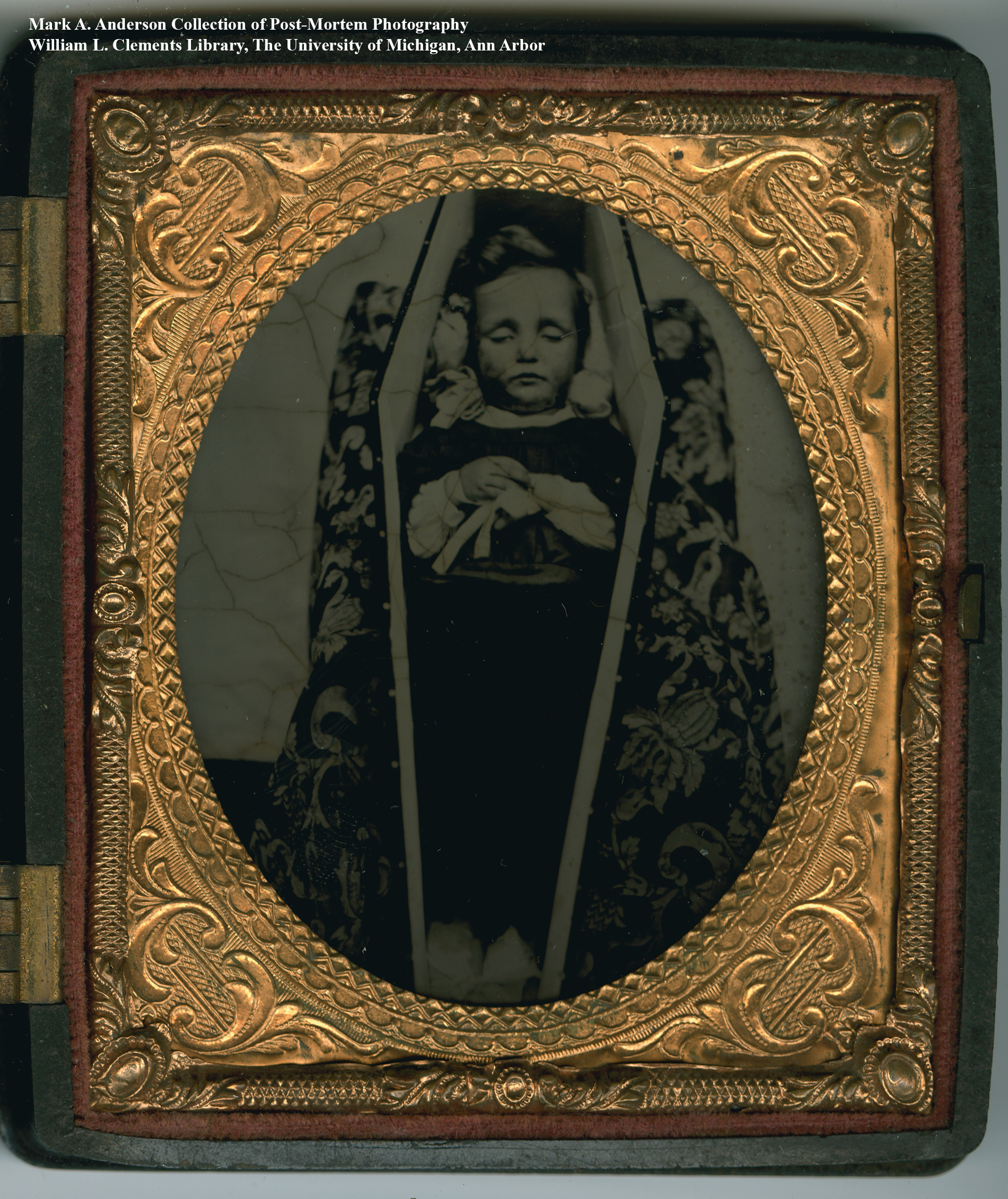 Despite their common name, tintypes are not made of tin.  A tintype is a plate of treated iron coated with a collodion mixture (afterwards dipped in a silver nitrate solution), exposed to light, developed in an iron sulfate solution, and fixed with a potassium cyanide solution.  Tintypes were popular from the mid-1850s to the mid-20th century. 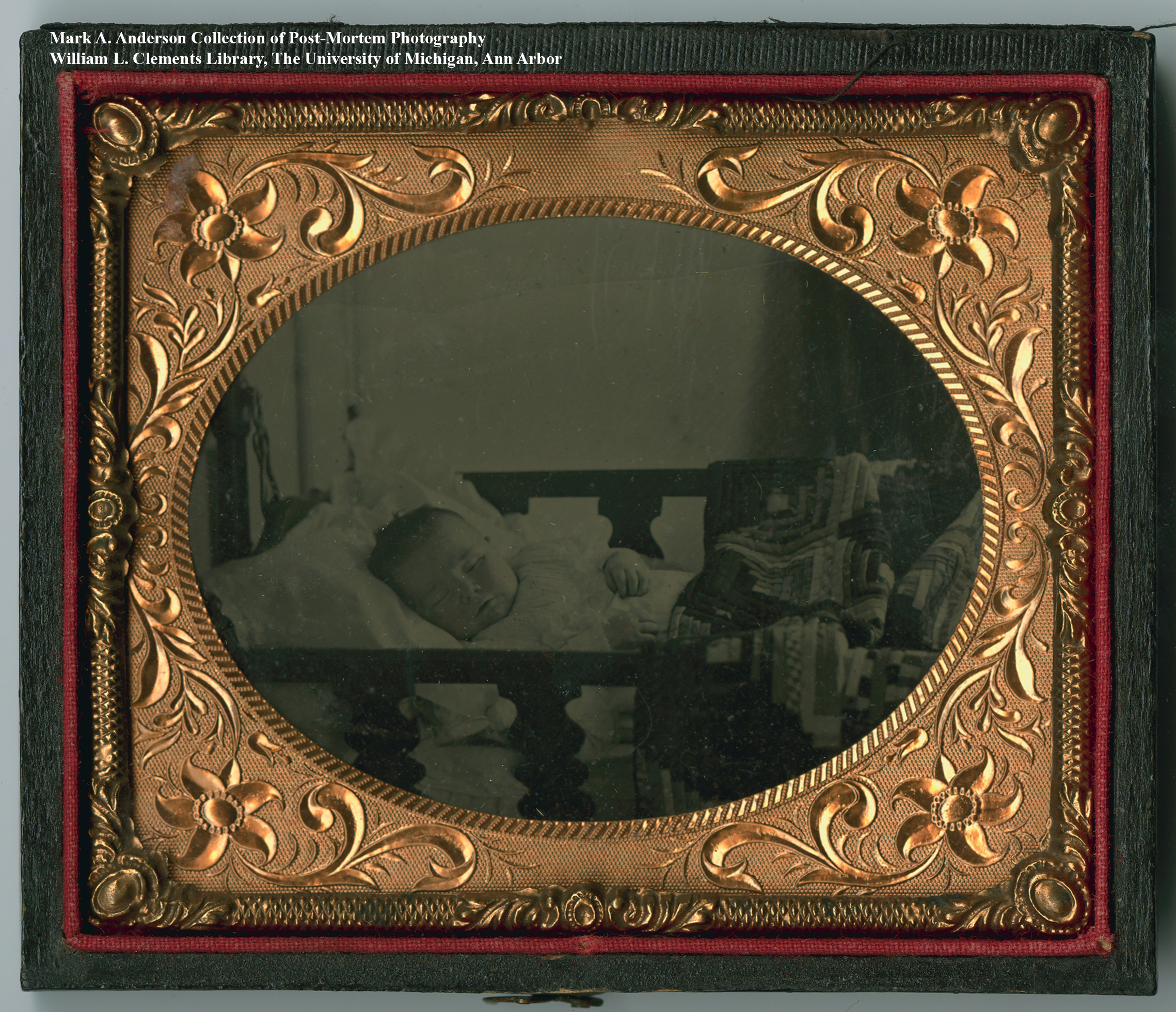 The terms “carte-de-visite,” “cabinet card,” and “stereoscope” refer to three different popular sizes of mounted paper photographs.  Carte-de-visite photos are typically 2 ½” x 3 ½” albumin prints (which used albumin from egg whites to bind the image to the paper) and date from the late 1850s to the late 19th century.  The cabinet card began to replace the carte-de-visite around 1870.  Cabinet cards are typically 4 ¼” x 6 ½” paper prints and were common into the early 20th century.  Stereoscopic cards are two offset paper photo prints mounted alongside one another.  When seen through a special viewer, these photographs give the impression of a three-dimensional scene.  The format was popular from the 1860s to the early 20th century, although personal post-mortem portraits in stereoscopic form are quite rare. 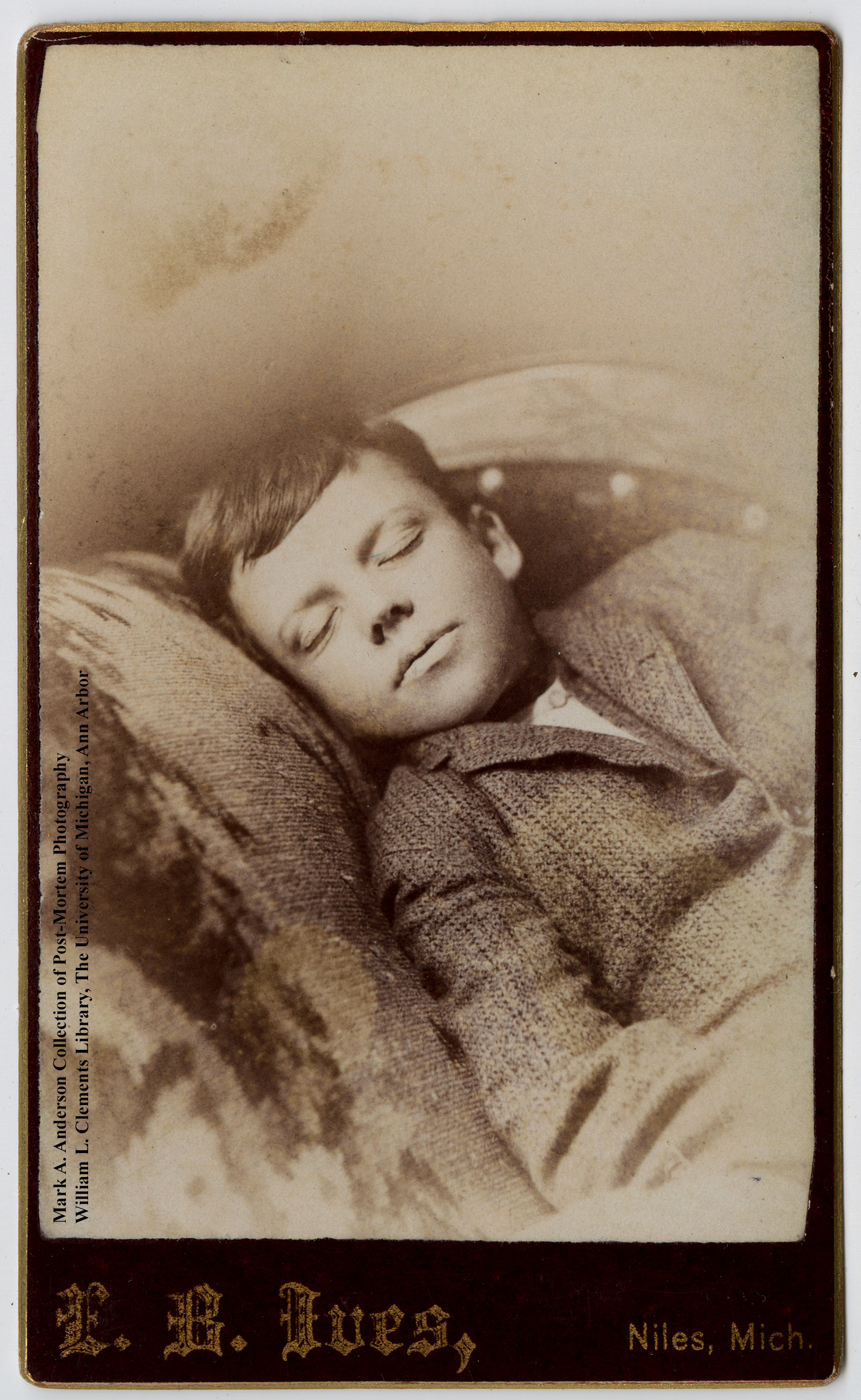 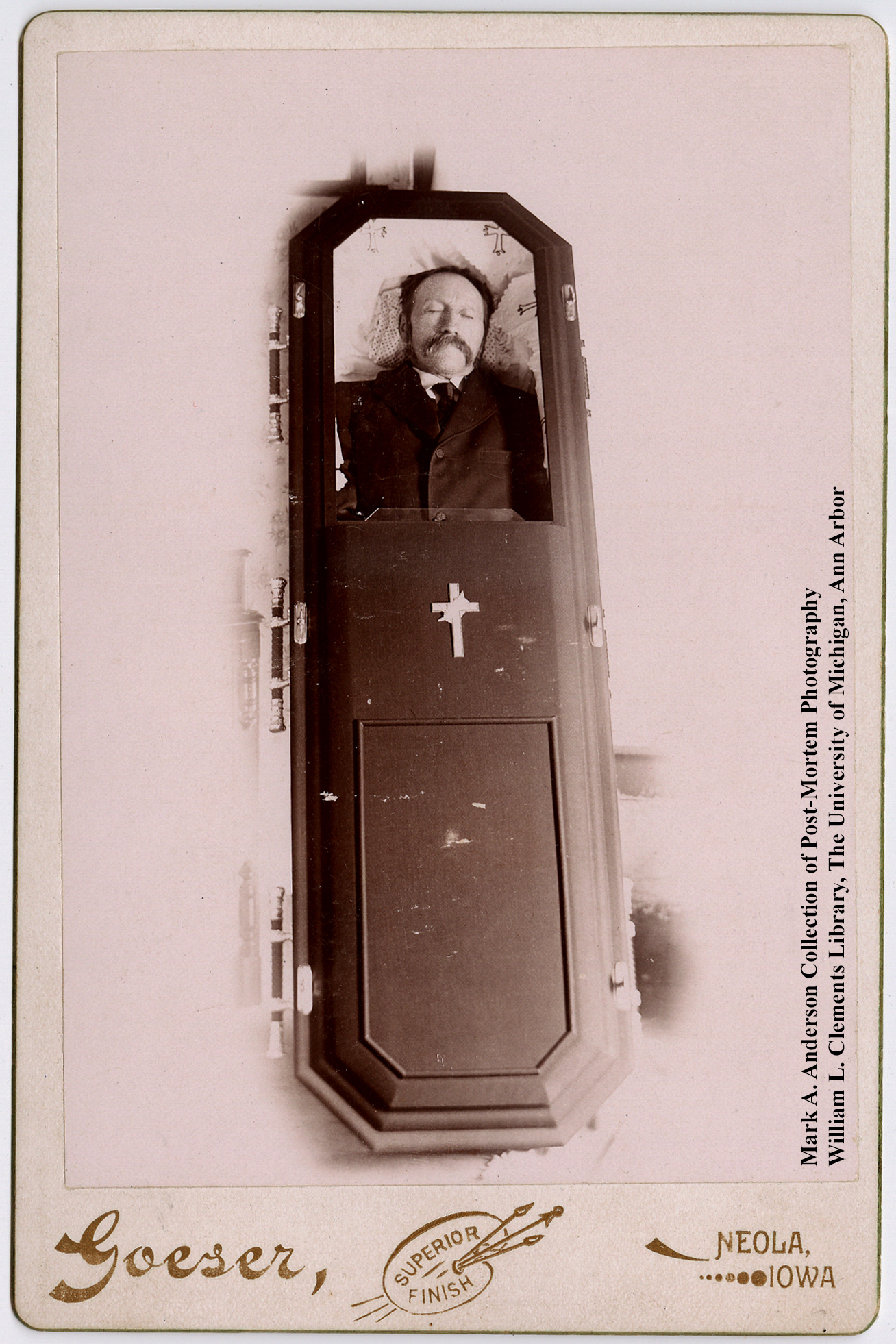 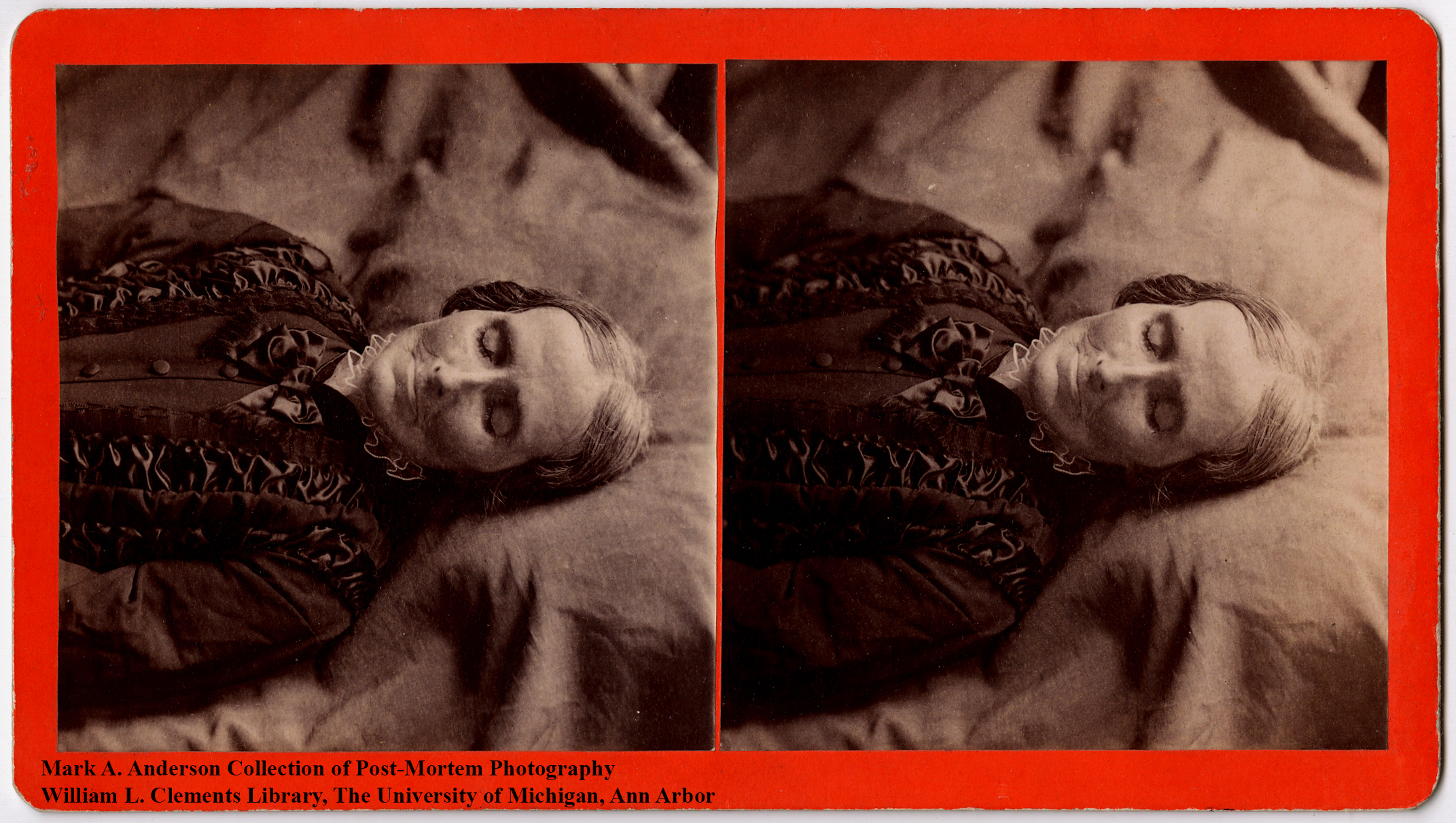 Many different methods for creating paper photos flourished in the early 20th century.  One popular format for photographs from 1906 to the early 1920s was the postcard.  Kodak pioneered the film and method for printing photographs on a standard-sized postcard with a pre-printed back for mailing. The square and compass emblem, with a trowel at the center, positioned atop this unidentified man’s unusual coffin suggests that that he may have been a Master Mason. The portion showing the man upright appears to be a rotated post-mortem photograph, which means that this may be a thrice superimposed composite image of the casket in the cemetery (left), the man ‘standing’, and the building foundation (right). A silver gelatin print is made from negative film stock (a surface coated with a mixture of silver salts and gelatin).  The film is exposed and developed, then transferred to paper.  This photographic process dates from the late 19th century to the present (for black & white film). 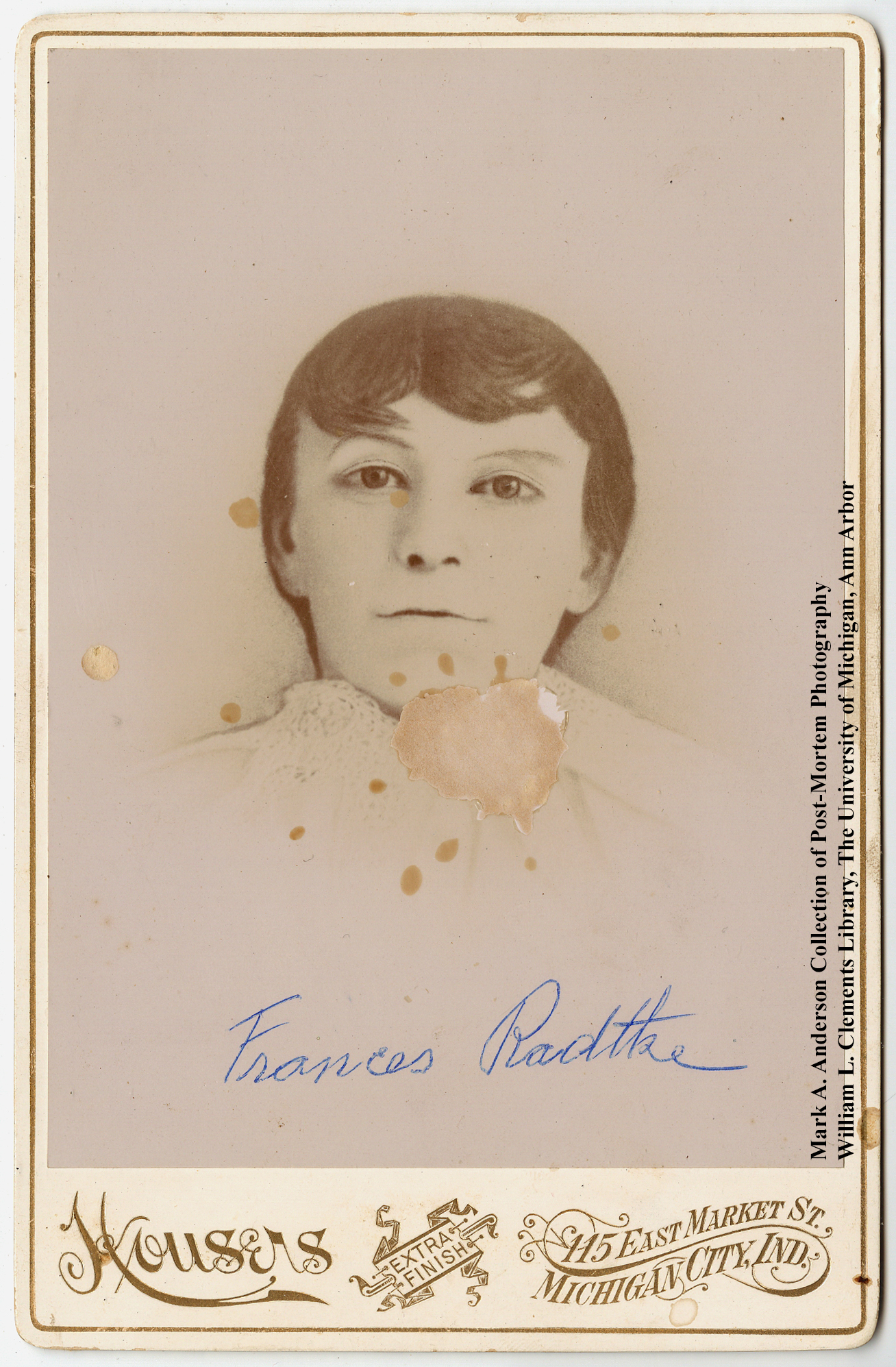