Home » Public Programs » Online Exhibits » “So Once Were We”: Death in Early America » Memorial Cards and Floral Arrangements Memorial, remembrance, or funeral cards were made of paper, often with black borders, ornate lettering, and illustrations of monuments, cemetery scenes, or other imagery. The cards included the name, birth and death dates, and other information about the deceased. They appeared in England in the 1840s and the United States quickly adopted the practice. The cards were (and still are) distributed at funerals or mailed as announcements or invitations. 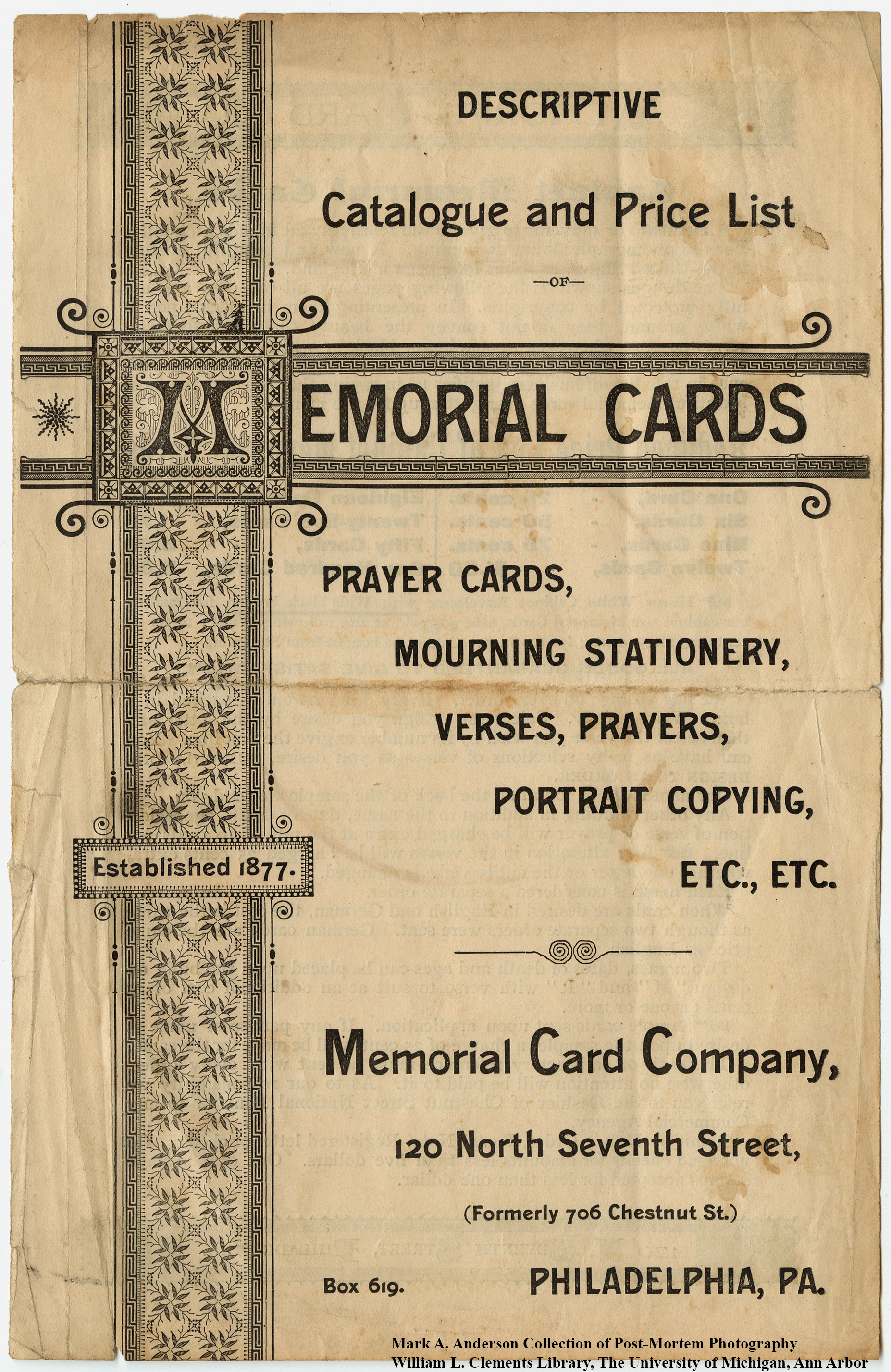 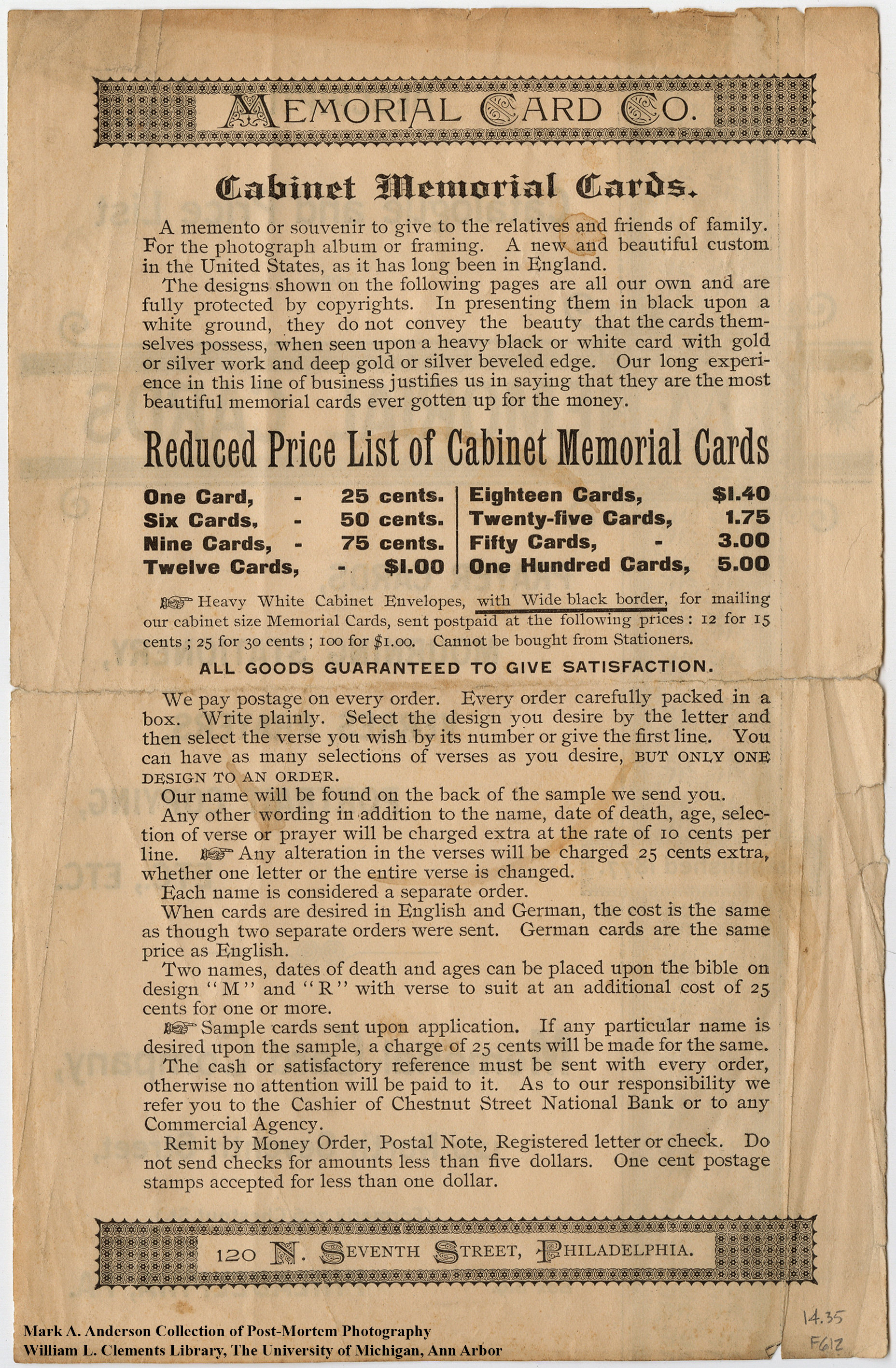 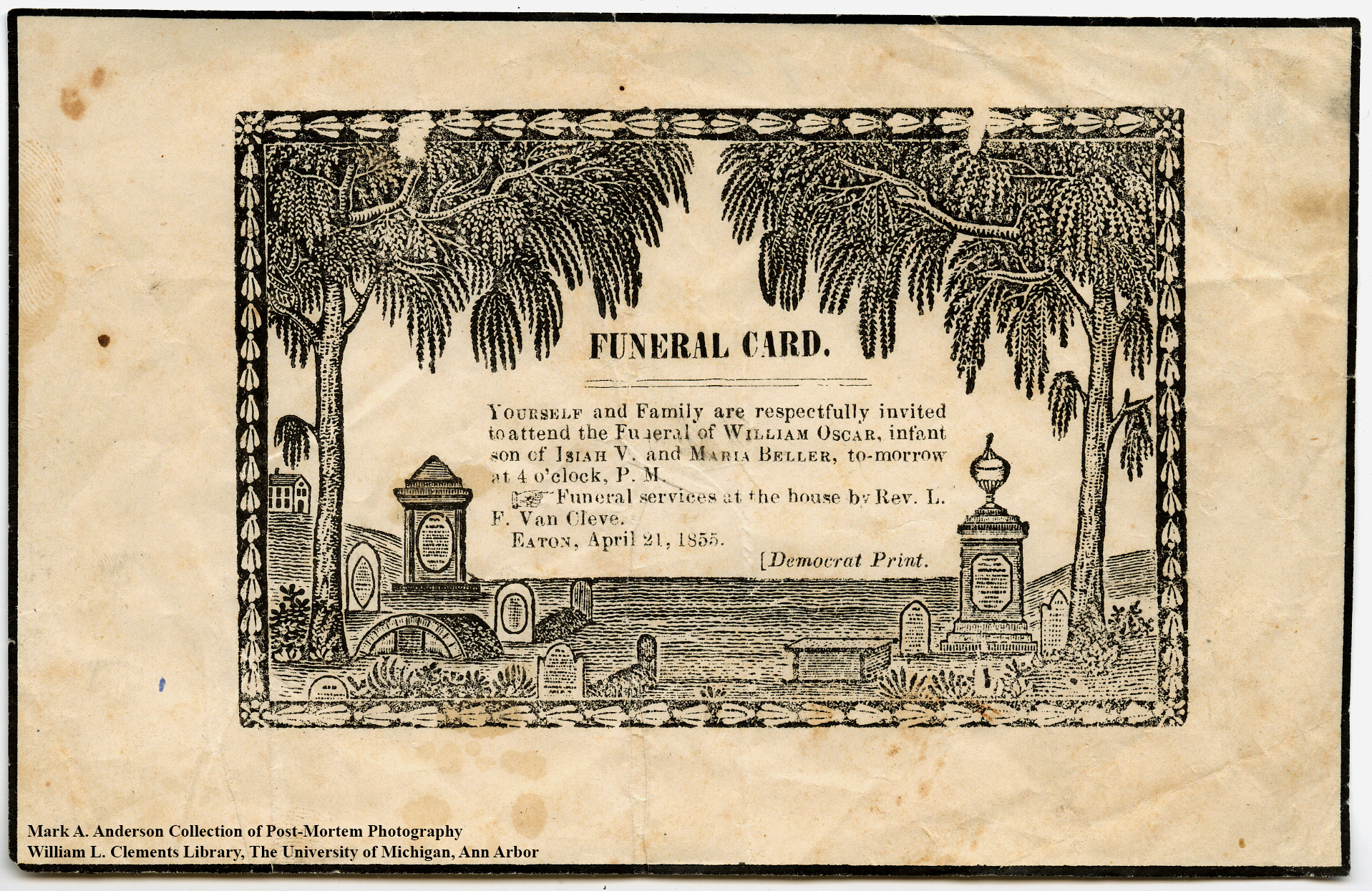 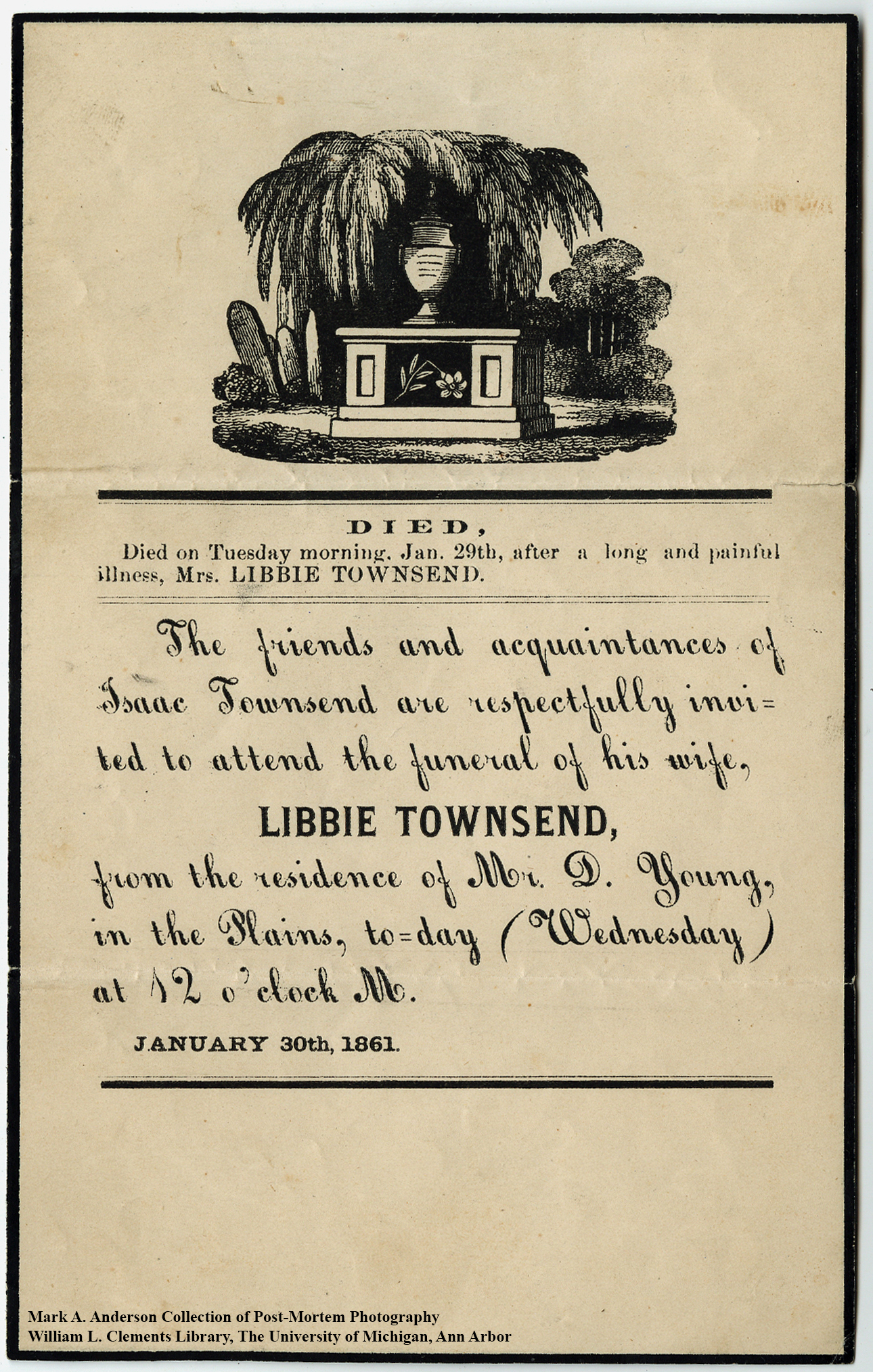 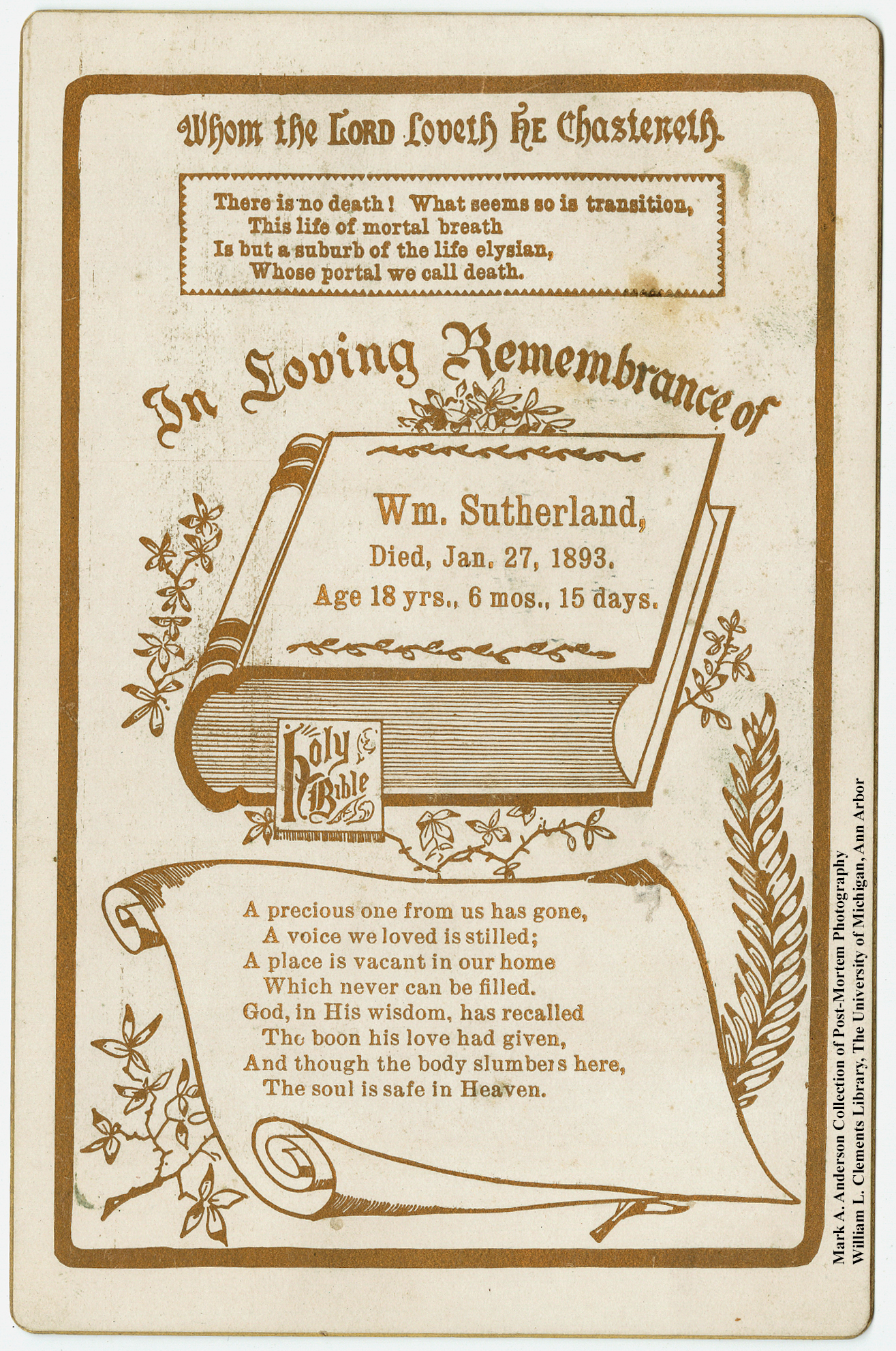 Flowers were used as expressions of affection and beauty as well as sources of fragrance to mask the smell of the decomposing body. Floral arrangements in the shapes of common funerary symbols were produced in the last half of the 19th century as funerals became more lavish. In addition to post-mortem photographs, photographers took still-life portraits of floral arrangements as tokens of remembrance. Firms such as Hardy & Yarnall offered to preserve flowers and arrange them with photographs and the deceased’s hair as a memento. 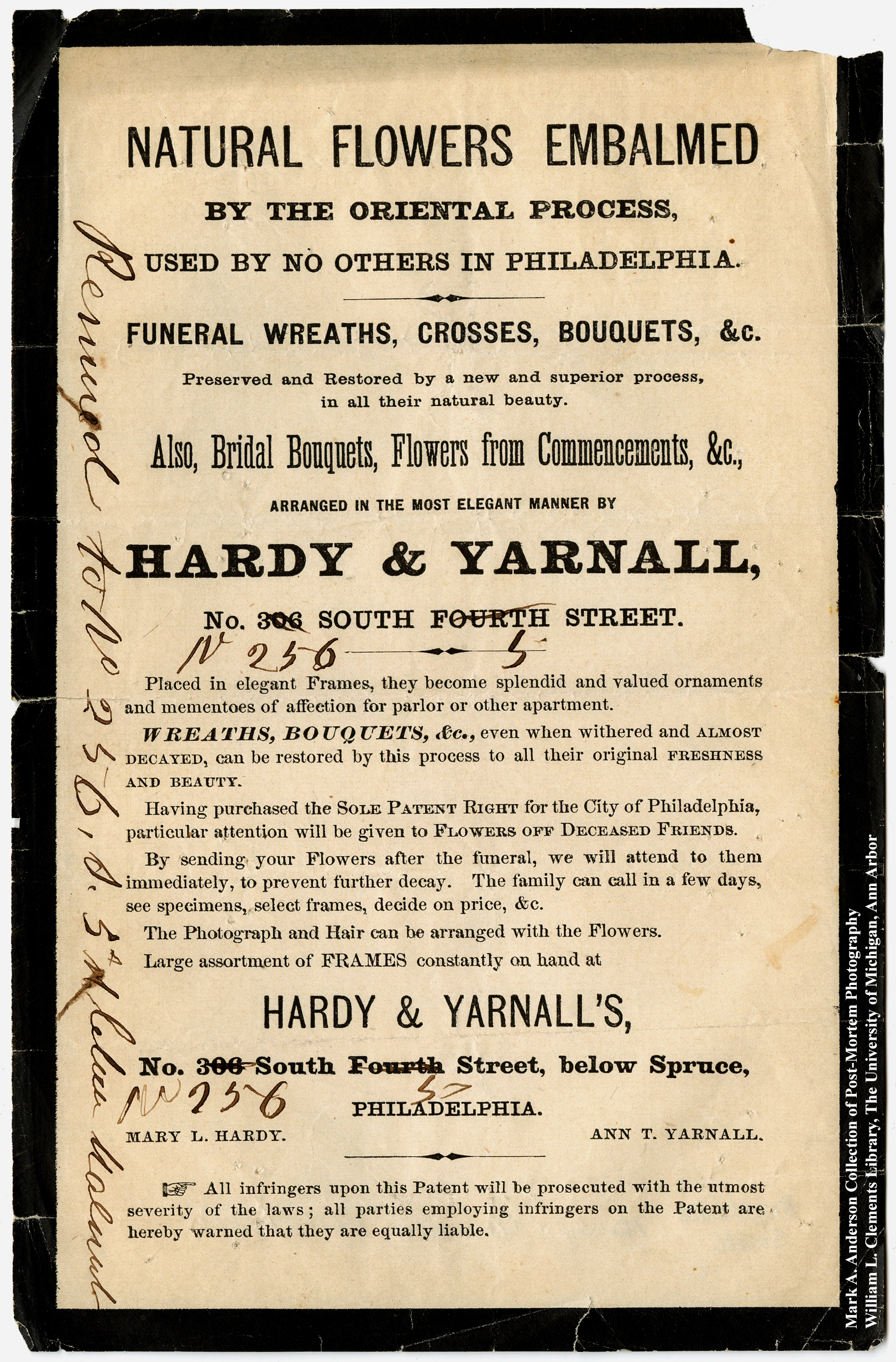 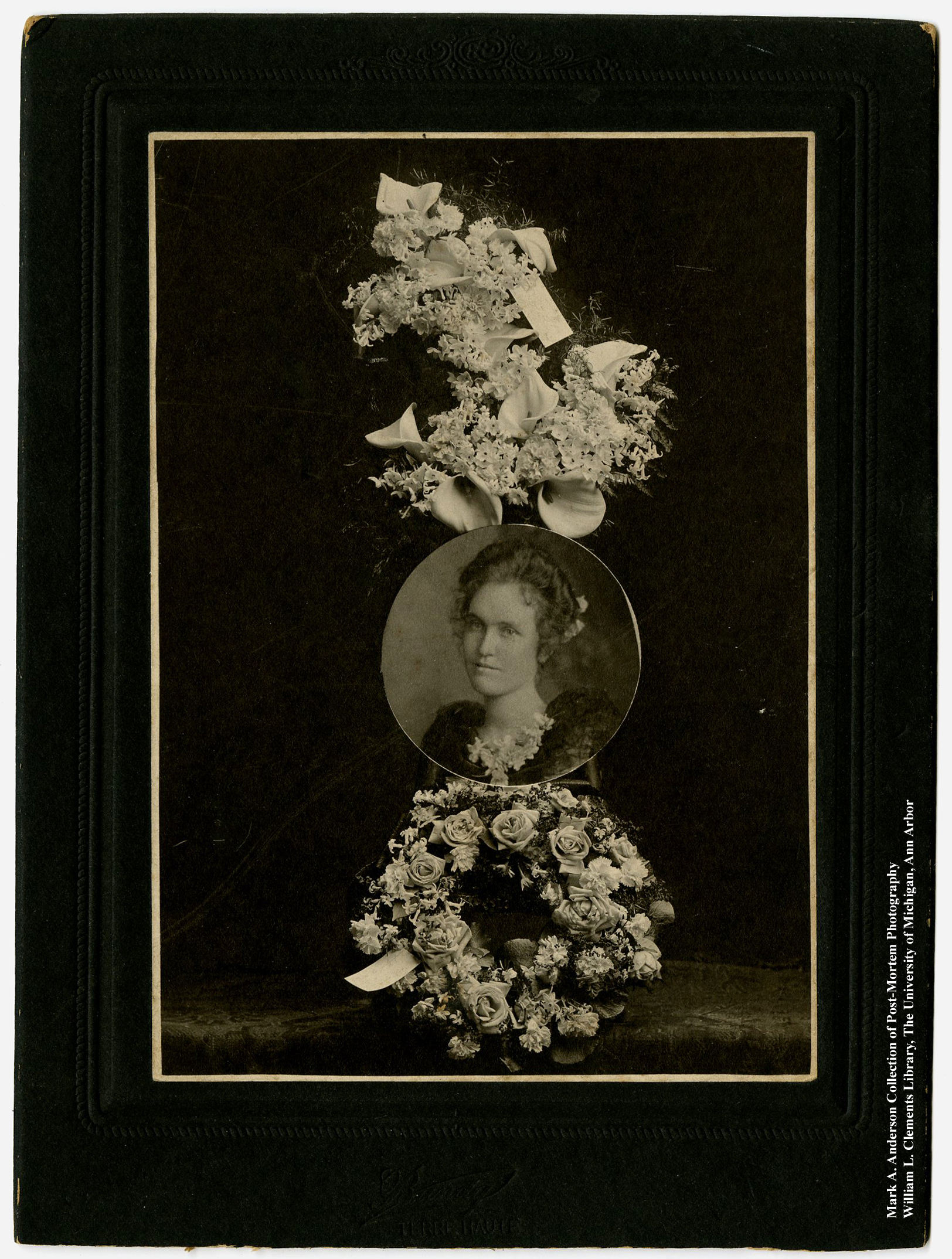 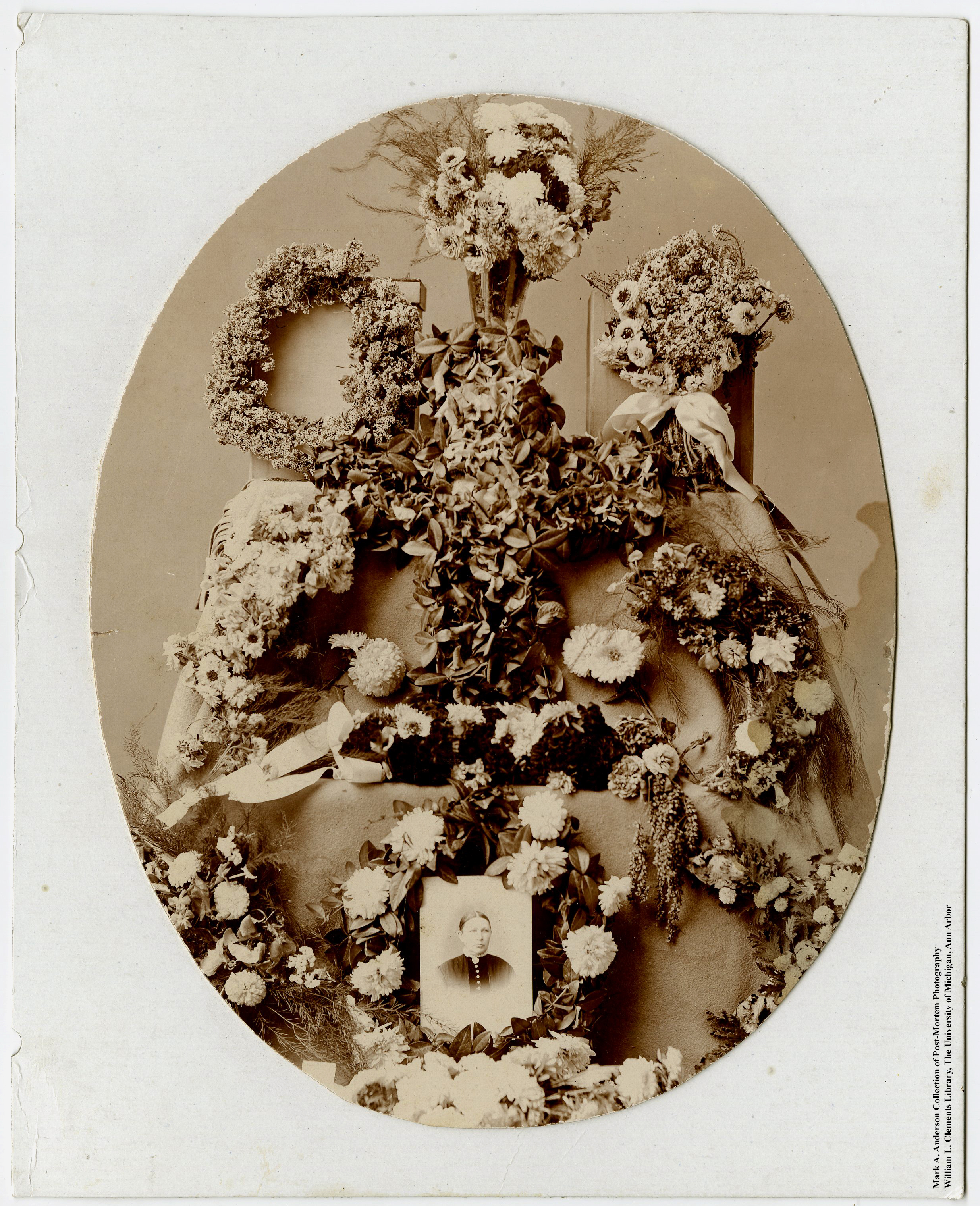 This example shows many different floral representations of funerary symbols in a makeshift display beside an exterior wall of a building. 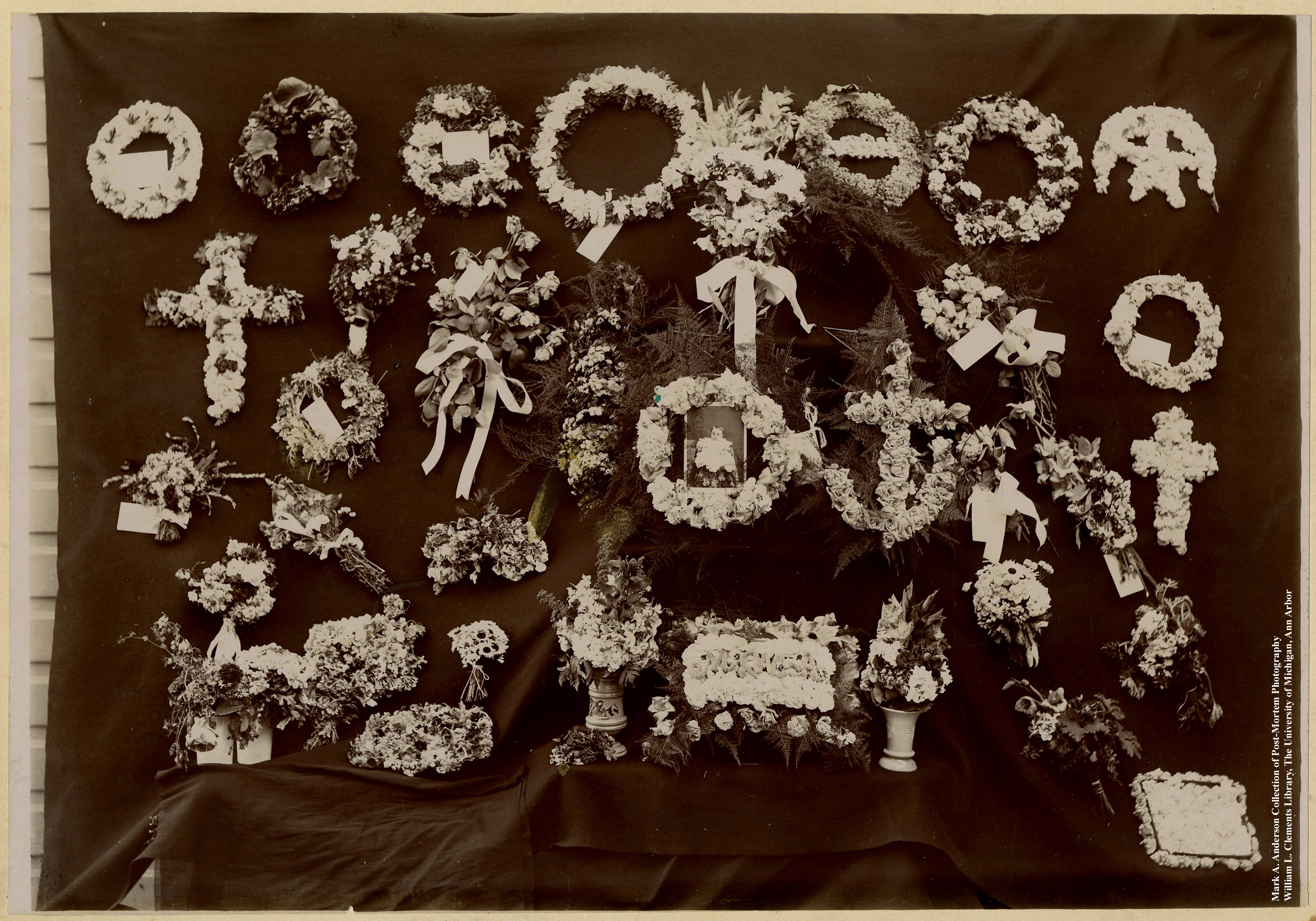 This massive photograph of Joshua Mull’s floral arrangements include a cabinet card portrait and a colored enlargement of the same portrait. The arrangement in the lower left corner is Jacob’s Ladder, a ladder to heaven. A pillow, signifying rest, and a bouquet also accompany the portraits. 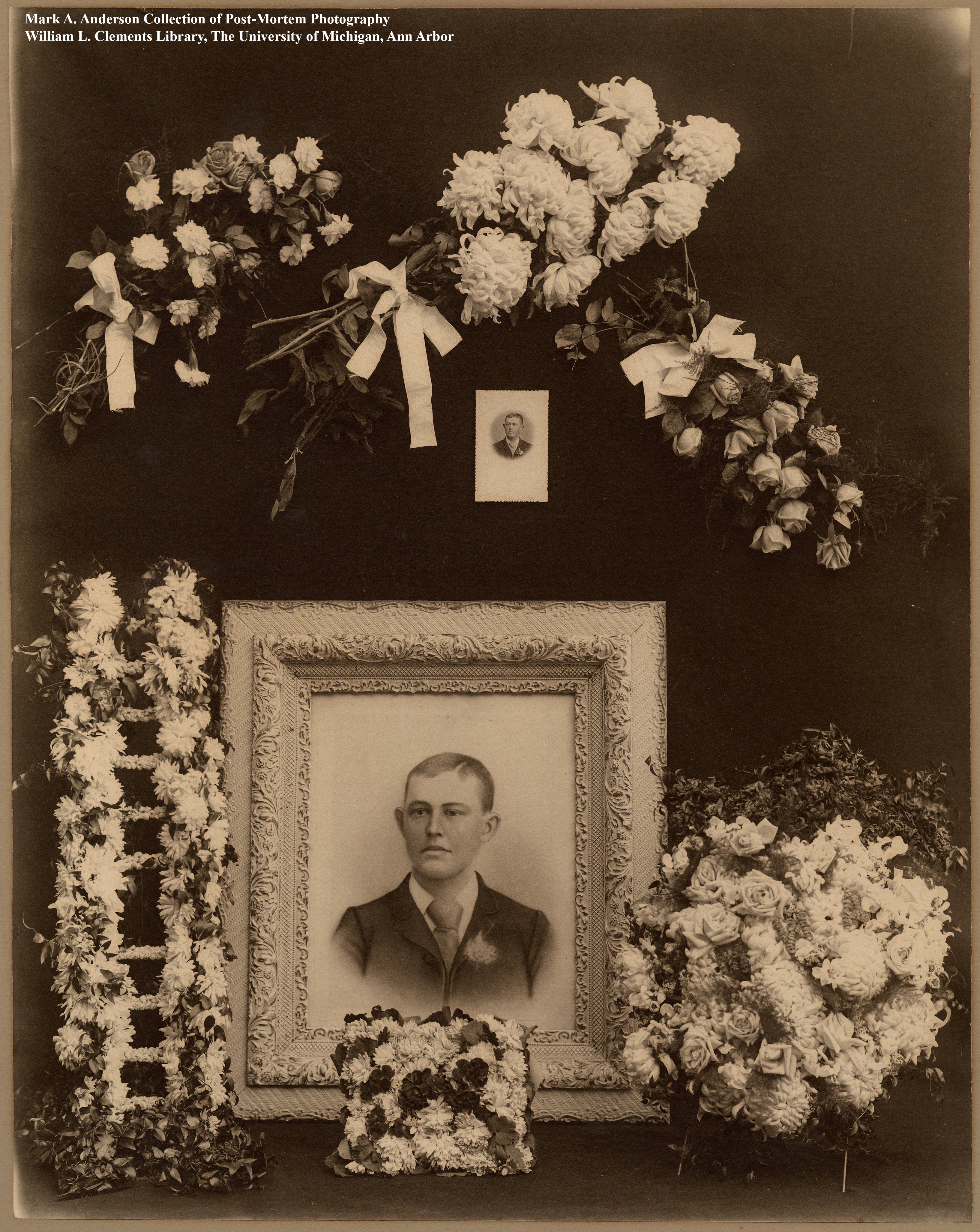 The photographer wrote instructions to himself on the back of this portrait, describing the necessary colors for the framed enlargement: “Water color eyes Dark Brown Hair Dark Brown complexion medium” 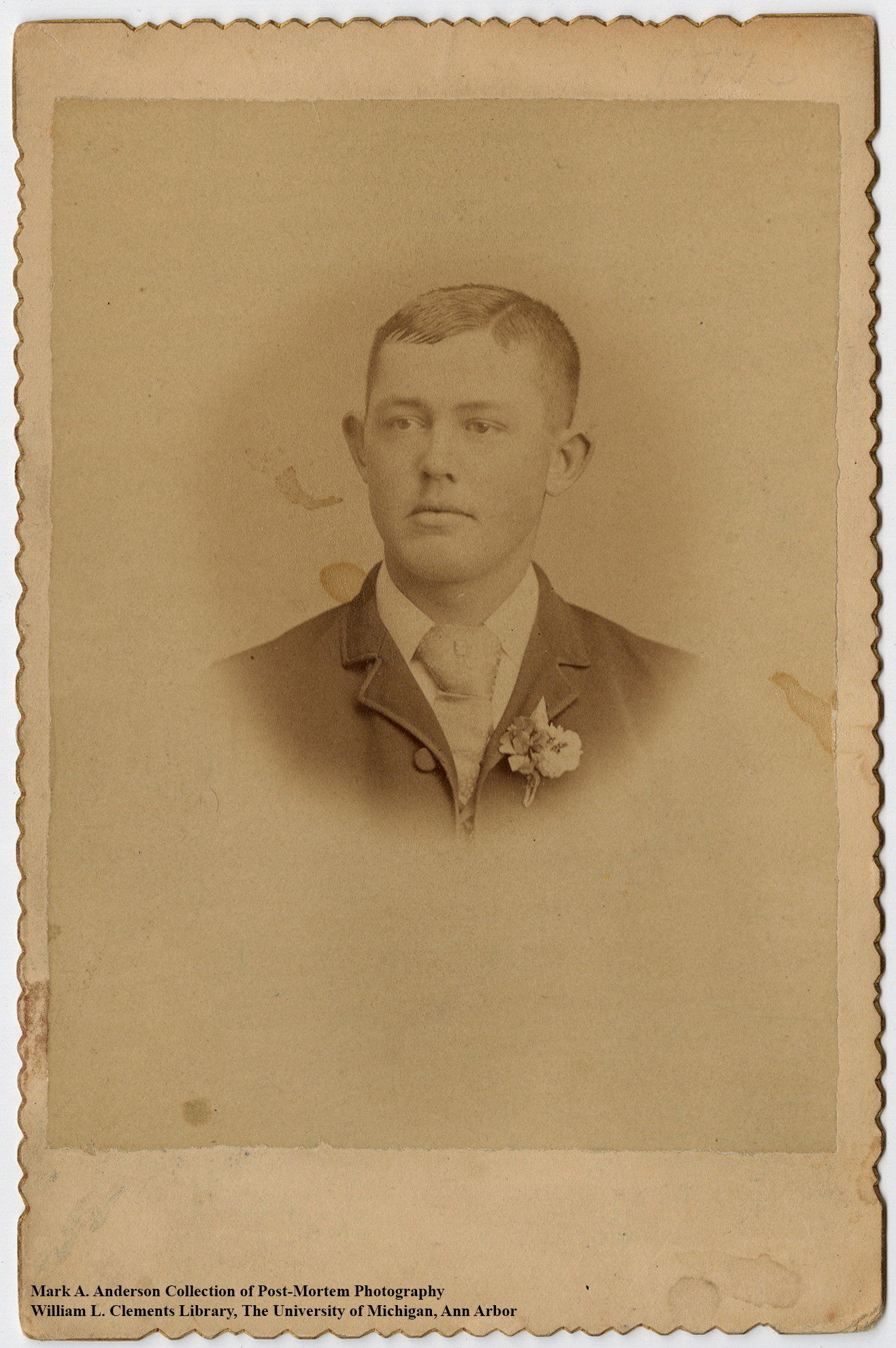