Home » About » Blog » From the Stacks: Battle Estrays

From the Stacks: Battle Estrays

Soldiers’ wartime letters and diaries sometimes contain references to items picked up on the battlefield or seized from enemy property. For example, the Henry Clinton Papers at the Clements Library contain letters and other materials captured or intercepted from Americans during the Revolutionary War. Battlefield artifacts such as bullets and other objects may be found in the realia collections of the Graphics Division.

In the Book Division, we have traditionally catalogued books of this kind using the local subject heading “battle estrays,” apparently a usage unique to the Clements Library. This terminology hints at the circumstances of the book’s capture without specifying the manner in which the item may have been acquired. Under this heading, you will find a handful of books in our collection with interesting stories to tell. Our “battle estrays” are usually inscribed with a brief note from a previous owner outlining the history of the object, purportedly captured during a military conflict. In some cases, this history may be supplemented by later notes from family lore. In researching these items, one must consider whether the inscriptions can be taken at face value. Whether to tell a better story, conceal wartime looting, or provide a more valuable association, it is always possible that the inscriptions do not tell the whole truth about the provenance of these books.

The earliest known example in the collection is a book from 1733, Robert Warren’s The Devout Christian’s Companion. It bears the inscription: “Jesse Banister at Saratoga Oct ye 11 1777 This book was taken from one of Burgoins men at the above date.” This date falls just after the Second Battle of Saratoga on October 7, 1777, when British forces led by General John Burgoyne were defeated by the American forces under Benedict Arnold. 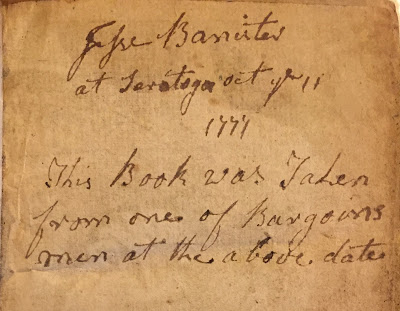 Volume 3 of Jonathan Swift’s Miscellanies (London, 1742) is the second “battle estray” connected to the American Revolution. This volume is inscribed: “22d-43d-54th & 64d Regiments took possession of New York 5 Brigade. Taken in ye Field of Battle the 16th of September 1776 T:B:” First Library director Randolph Adams noted in The Colophon that the British occupied the lower part of Manhatten Island on the 14th and 15th of September, then started up the island on the 16th. The battle on the 16th, in which this book was picked up, took place about what is now 126th St. 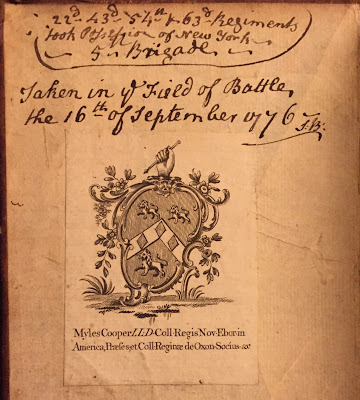 We have one item linked to the Mexican War, Instruccion para la Infanteria Ligera del Ejercito Mexicano (Mexico, 1846). It contains the signature of Lieut. Thomas R. McConnell, 4th Inf’y. U.S.A. Fort Chapultapec. Mexico, Sep. 13th 1847. This is the date of the U.S. attack on Chapultepec Castle, during which this book was apparently taken.

Nine “battle estrays” can be found among our Civil War books. Unsurprisingly, five are Confederate imprints, such as William Gilham’s Manual of Instruction for the Volunteers and militia of the Confederate States (Richmond, Va., 1861) captured at Fort Donelson; William Hardee’s Rifle and Light Infantry Tactics (Nashville, Tenn., 1861) “taken from the Rebels at Nashville, Tenn. March 26th 1862,” A Manual of Military Surgery (Richmond, 1863) picked up after the Battle of Atlanta, and A Digest of the Military and Naval Laws of the Confederate States (Columbia, 1864), removed from General Lee’s captured baggage train. One prayer book was reportedly “thrown overboard from the rebel blockade runner Robert E. Lee off Wilmington, N.C.” in November of 1863. 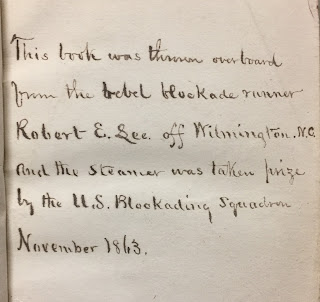 Other purloined titles included The Washingtoniana: Containing a Biographical Sketch of the Late General George Washington (Baltimore, 1800), The Letters of Curtius (Richmond, 1804), and Reliquæ, a book of poetry by Emma M. Blake.

One particularly interesting item is the Lectures of Lola Montez (Countess of Landsfeld) Including Her Autobiography (New York, 1858). According to the inscription, it was taken from a deserted mansion in Charleston, South Carolina in March of 1865 by Luis F. Emilio, a Captain of the 54th Massachusetts Volunteer Infantry. The 54th Massachusetts was the first Union regiment to consist of African American enlisted men. Captain Emilio became acting commander of the regiment on July 18, 1863 and mustered out of the army on March 29, 1865. 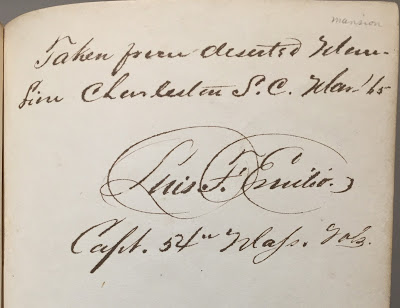 Finally, the collection contains three examples of books salvaged from World War II. Major Robert Benaway Brown, Curator of Books from 1946 to 1950, brought back a slim volume recovered from the city of Isernia in 1944. Another book, Royal Westminster and the Coronation, was damaged by a bomb in London. The inscription reads, “One of some 2000 books variously injured in 217 Amesbury Avenue, Streatham, London by a flying-bomb on June 29th 1944. Four were killed in the opposite house. I, the occupant of No. 217, and my wife were seriously injured and buried under debris. R.P. Howgrave-Graham.” 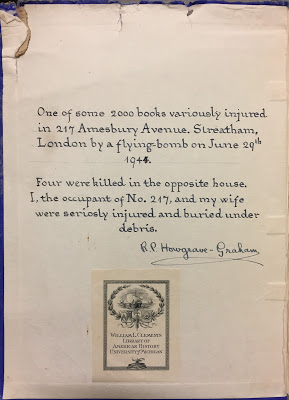 The last item, a charred remnant of a book from a burned library, was salvaged by an American soldier and is now preserved in a cloth case. These artifacts remind us of the great losses suffered during wartime as well as the personal stories behind many of the books we care for in this collection.