Home » About » Blog » Imperial Spanish Symbolism: The Pillars of Hercules

This essay by volunteer Derek Brereton examines three examples of the same Spanish cultural symbolism found in some of the oldest collection items at the Clements Library.

The Clements Library is fortunate to possess at least three fine examples of illustrations exploiting the Spanish imperial theme of the Pillars of Hercules. The most ornate of these appears in a publication by the Spanish explorer Álvar Núñez Cabeza de Vaca, dedicated to King Carlos V. Cabeza de Vaca’s prose is spare and utilitarian, as befits his purpose—a straightforward, unembellished account of a journey that began in 1527 with a shipwreck off the coast of what is now Alabama, and became a circuitous, Herculean trek overland from there to Southern California in search of what might be called “The Spanish Mecca”: gold. Indeed, so spare is Cabeza de Vaca’s narration, that, nowadays, to begin to grasp the hardships and dangers he experienced, the reader must supply substantial interpolations, in light of what is now known about the harsh and unforgiving types of environment and terrain through which he suffered and persisted for a total of some nine years, until 1536. 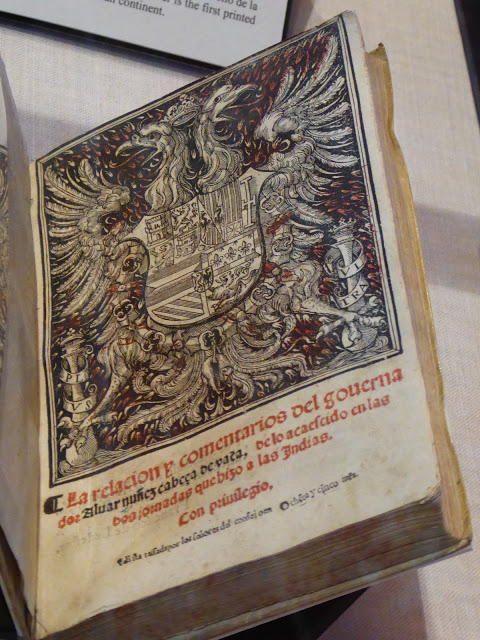 Today we notice first the double-facing Hapsburg eagle, displayed because Carlos V was indeed related to the Hapsburgs. But then we notice the eagle’s talons, each set clutching one of a pair of the “Pillars of Hercules,” whose capitals are not traditionally Grecian, but royal crowns. Geographically, the Pillars of Hercules include the Rock of Gibraltar and its Moroccan counterpart across the strait. The Latin motto, “Non Plus Ultra,” or, “Nothing Beyond,” had, since classical times been used to indicate that there were no lands lying west of the strait. But with Spain’s discovery and colonization of the New World, epitomized by Cabeza de Vaca’s hazardous journey, the royal motto became, and still is, “Plus Ultra,” showing how the range of Spanish sovereignty had far superseded that of classical Greece and Rome. 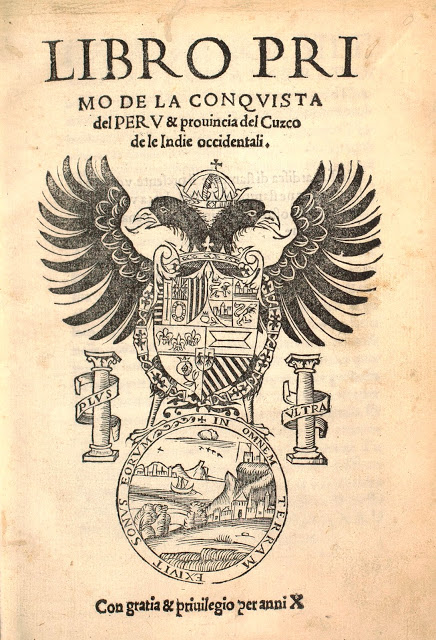 In keeping with this self-conception of Spain, from 1535 we find the Italian Libro primo de la conquista del Peru &amp; provincial del Cuzco de la Indie Occidentalia, with another double-facing Hapsburg eagle, pillars, and motto. This title page illustration includes elaborate, jumbled, heraldic quarterings, indicating some of the royal houses with which the Spanish crown was connected: lion of Leon, castle of Castile, striped shield of Aragon, fleur de lis of France. The inscription in the circle below the pillars reads: “Exivit sonus forum in omnem terram,” which comes from the Vulgate Bible, Psalm 18 (or 19 in modern translation). According to U-M’s Professor of Spanish Ryan Szpiech, this means, “Their voice goes out through all the earth.” 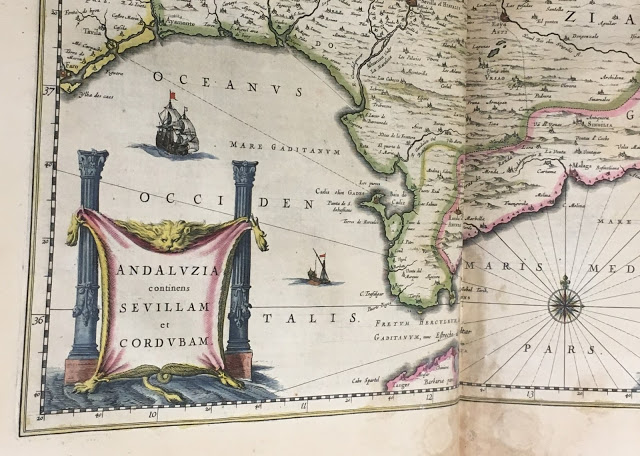 Another engaging iteration of the Pillars of Hercules theme appears in the map division’s 1635 atlas Le theatre dv monde ou Novvel atlas contenant les chartes et descriptions de tous les païs de la terre mis en lumiere by Guillaume et Iean Blaeu. Here, embellishing the map is an image of a lion skin stretched between two elegant fluted columns with Corinthian capitals. It’s an allusion to one of Hercules’ twelve labors, the slaying of the Nemean lion. These labors were imposed on Hercules by Zeus’ wife Hera, because Hercules was the illegitimate progeny of her husband by a mortal woman, and the living evidence of Zeus’ infidelity. In the Spain of recent centuries, however, it has tended to be another of the twelve labors, the slaying of the Cretan bull, that, because of its evocative suggestion of the bullfight, has garnered the most interest—from commentators seeking to cast the bullfight in the context of ancient Mediterranean culture. In the present image of the pillars there appear no eagle and no heraldic shield, yet the reference to royal Spanish sovereignty remains obvious.

Today, the idea of the Pillars of Hercules, with the implied extension of empire, is memorialized monumentally in several southern Spanish cities, most notably in Seville’s huge public park, the stone-paved Alameda de Hercules, and Ronda’s central Plaza del Socorro anchored by a statue of Hercules himself. During the centuries before and after Christ, the man-god was widely worshiped around the Mediterranean, and today the remains of a grand Grecian temple to him can be visited, and even walked through, at the UNESCO World Heritage Site at Agrigento in southern Sicily.

Together, these three illustrations shed light on several important themes: the image which Spanish royalty has of itself; the role of Andalucía as the historic point of departure for the intrepid Spanish galleons that, during the Renaissance transformed the Atlantic Ocean from a barrier into a thoroughfare; and the persistence into the present of ancient Mediterranean cultural themes.