I received my first introduction to the Clements Library during a class visit in the winter semester 2017. I immediately knew that I wanted to become a volunteer.  After contacting the Library, I began working in the Manuscripts Division, where the Curator assigned me the task of updating a finding aid and creating a supplementary recipient index for the letter books of John Louis Ligonier, the British Army’s Commander-in-Chief of the Forces, 1757-1759; Master-General of the Ordnance, 1759-1763.

The Clements Library acquired one letter book of John Ligonier, dating from 1758 to 1760, as a gift from the Clements Library Associates (CLA) in 1968.  Project archivist Philip Heslip wrote a descriptive finding aid for it in 2010, thanks to funding from the National Endowment for the Humanities (NEH) and the “We the People” project.  The Library continually adds to its manuscripts holdings and sometimes, good fortune allows them to bring formerly separated materials back together again.  In 2016, Lord Ligonier’s second letter book, 1760-1761, from the Torridon House of the Earls of Lovelace, came up for sale in Scotland.  Via intermediaries and again funded by the CLA, Ligonier’s letter books are now side-by-side at the William L. Clements Library.

As a student of history, I was ecstatic not only to explore handwritten primary sources from hundreds of years ago, but also to aid other historians and researchers by creating descriptive materials for the manuscripts.  I read every entry in each letter book and documented information such as letter dates, contents, recipients’ names, and other details.  The resulting spreadsheet may be consulted at the Clements Library and the data will be used for multiple purposes, including the eventual digitization of the volumes. 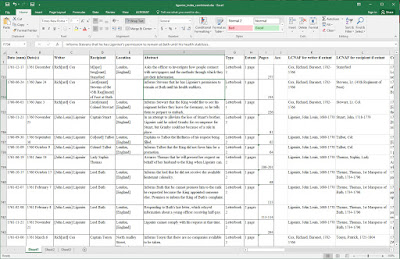 As Commander in Chief and as Master General of the Ordnance, Ligonier corresponded regularly with Secretary of War William Barrington, largely about the succession of officers, position vacancies, troop movements, the lack of new recruits, and depleted financial resources.  Ligonier received a flood of letters from aristocrats and others seeking commissions for family or friends.

Most of Ligonier’s letters are cut-and-dry administrative orders, with the occasional touch of irritation, as when Nehemiah Donnellan sent a staggering 52 petitions seeking assistance.  Despite Ligonier’s having secured him a Lieutenant Colonelcy, Donnellan never joined his regiment at Guadeloupe, instead tendering a resignation to Barrington.  When Ligonier refused to do anything more for him, Donnellan accused Ligonier of injustice.  Ligonier concluded their correspondence:  “So handsome a Behaviour dispenses me certainly from answering your Letters any more . . . His Majesty has never named your name to me, and I am sure I shall not name you to Him, till you take a very different method, than what you are now following.” (November 25, 1760) 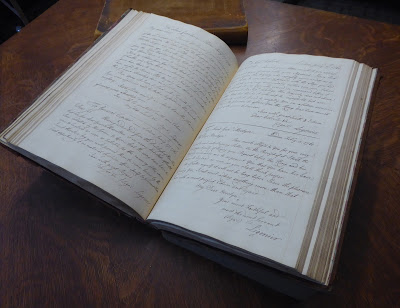 The Ligonier letter books offer visiting researchers a view of military administration during the Seven Years’ War.  I hope that the revised finding aid and recipient index makes these manuscript volumes more accessible.