Home » About » Blog » Joseph Cabay, or Kewakezhig: A Home in the Skies

The Clements Library is thrilled to have recently acquired a mid-19th-century calling card for a Saginaw Band Ojibwa man named Joseph Cabay which will be a welcome addition to the Native American History Collection. Born around 1837 in Saganing, Michigan, to Ca-ba-o-sau-dung/Elliot Cabay (a son of Chief O-ta-was) and Pedah-bore-no-qua, Joseph was living at 5 Tremont St., Boston at the time this calling card was produced. Like many Native Americans of his day and age, Joseph had to navigate between two vastly different worlds: the predominately white civilization prevailing in the country he lived in, and the indigenous civilization he was born into. Part of this cultural balancing act is reflected in the multiple names Joseph listed on his calling card. His Western-normative name “Joseph Cabay” pays homage to his personal lineage as well as his family’s love of scripture, while he also included his Anishinaabemowin name “Kewakezhig,” which he translated as meaning “A Home in the Skies.” 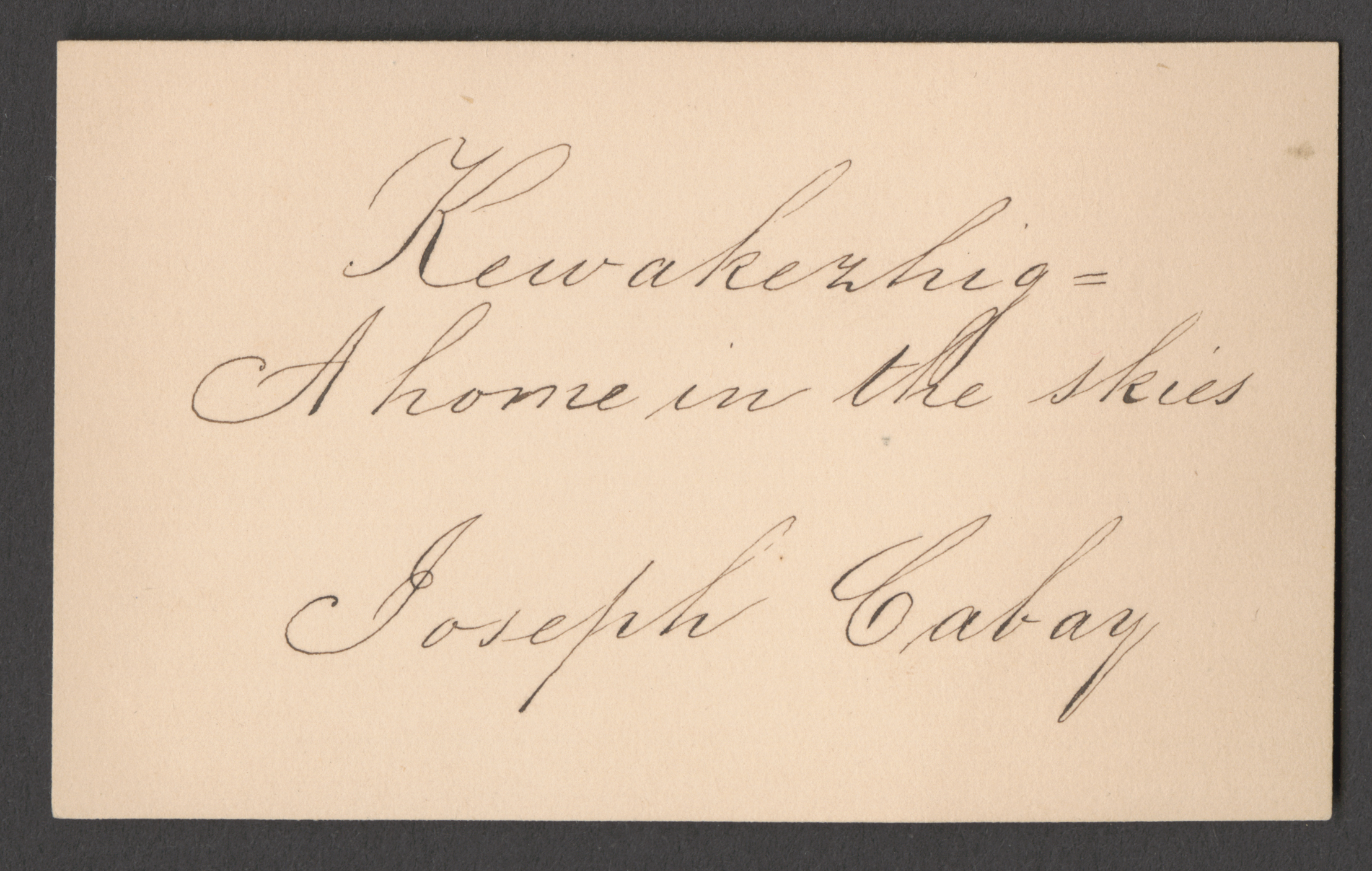 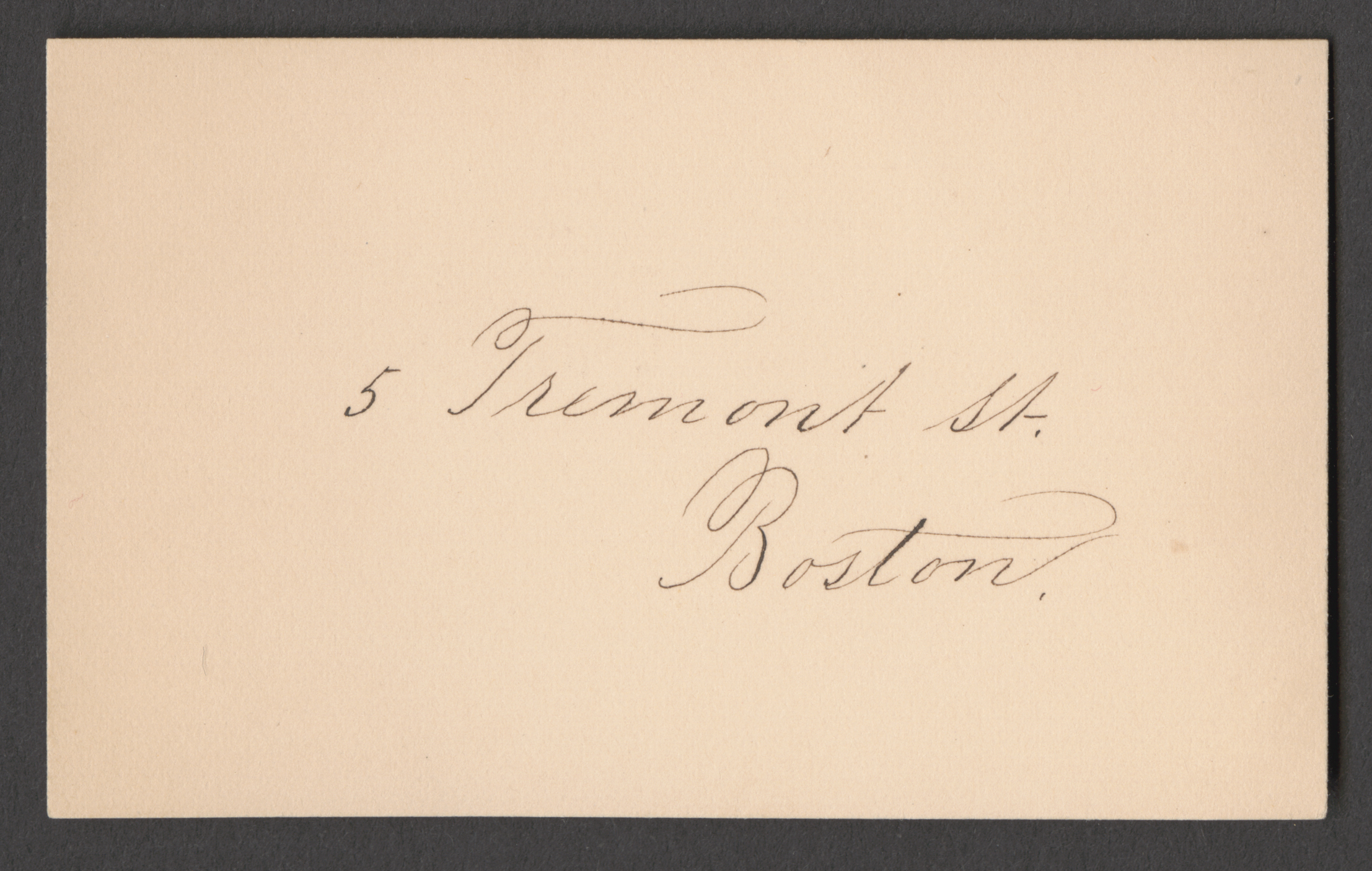 Some additional details of Joseph’s life are also revealed in the text of Wah Sash Kah Moqua: Or, Thirty-three years among the Indians, a book written by his wife Mary Sagatoo (née Henderson) about her experiences living with the Saginaw Ojibwa while engaged in missionary work. According to Mary, she and Joseph first met each other at Bromfield Church in Boston, where she was reading aloud a piece she had written for the church’s paper. During her speech, Mary noticed that a stranger had been giving “close attention to the reading,” and afterwards she was introduced to the young man whom a friend described as “a young Indian chief from Baldwin University.” After exchanging pleasantries and departing, thinking that she would never see him again, Mary was surprised to see Joseph back at Bromfield Church the very next day. He had been invited to give a speech at the church’s Sabbath School which included the singing of “a verse in the Indian language.” Joseph ended up staying in the Boston area for three years, where his activities included preaching, networking with clergymen, and engaging in religious studies at Harvard’s Theological Library. After getting to know each other during this time, Joseph asked for Mary’s hand in marriage and inquired if she would be willing to come with him to Michigan to help conduct missionary work among his people. Despite some reticence from her mother and father, the latter of whom stated he would have preferred her to “marry one of your own race,” Mary accepted the proposal. 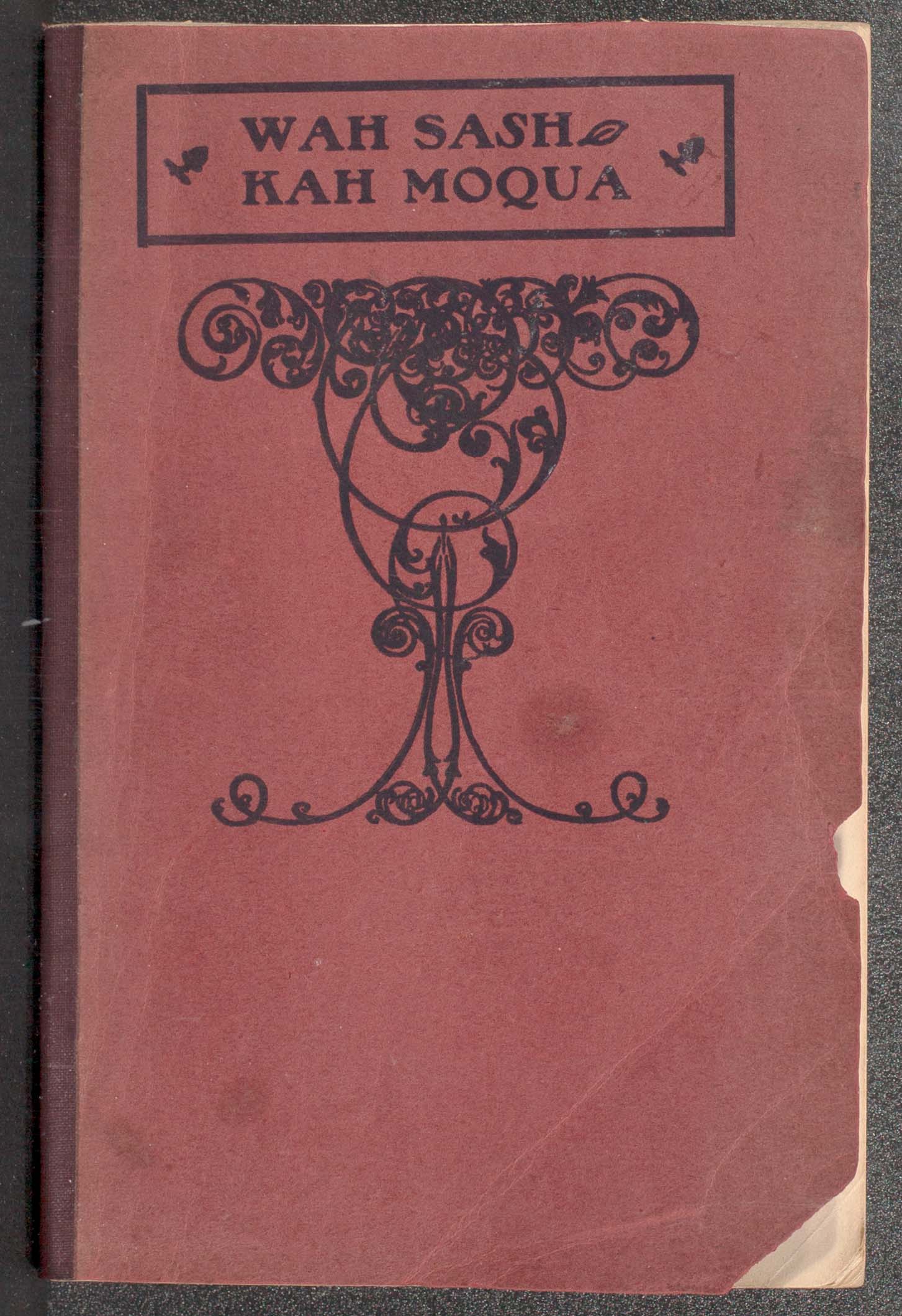 Tragically, as the couple prepared to head to Michigan, Joseph was diagnosed with tuberculosis and told that he did not have much time left to live. Initially, he asked Mary if he could return home by himself as he did not want her to feel obligated to go through with the marriage anymore, but she refused to abandon him and the two wed on March 5th, 1863. A month later they set out for Michigan, whereupon their arrival in Saganing Joseph’s family was surprised but happy to see their son had gotten married (Mary’s letter to Joseph’s father Elliot announcing the marriage and subsequent travel plans had never arrived). By this point Joseph’s condition had deteriorated severely, and as he lay on his deathbed he asked Mary to promise that she would carry out all of the plans they had made; she agreed and was ceremonially adopted by Joseph’s father before being given the Anishinaabemowin name “Wah Sash Kah Moqua,” meaning “There was darkness but your coming brings light.” On June 13th, 1863, a few days after their arrival and a mere three months into their marriage, Joseph died while surrounded by his family. He was approximately 26 or 27 years old. 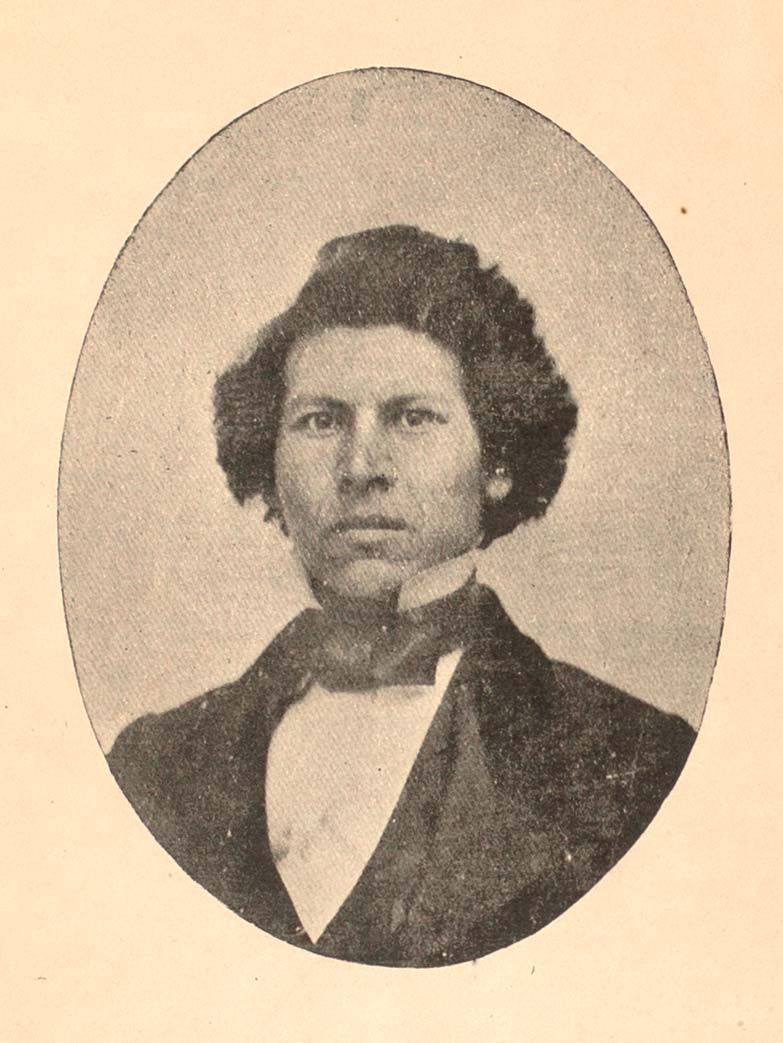 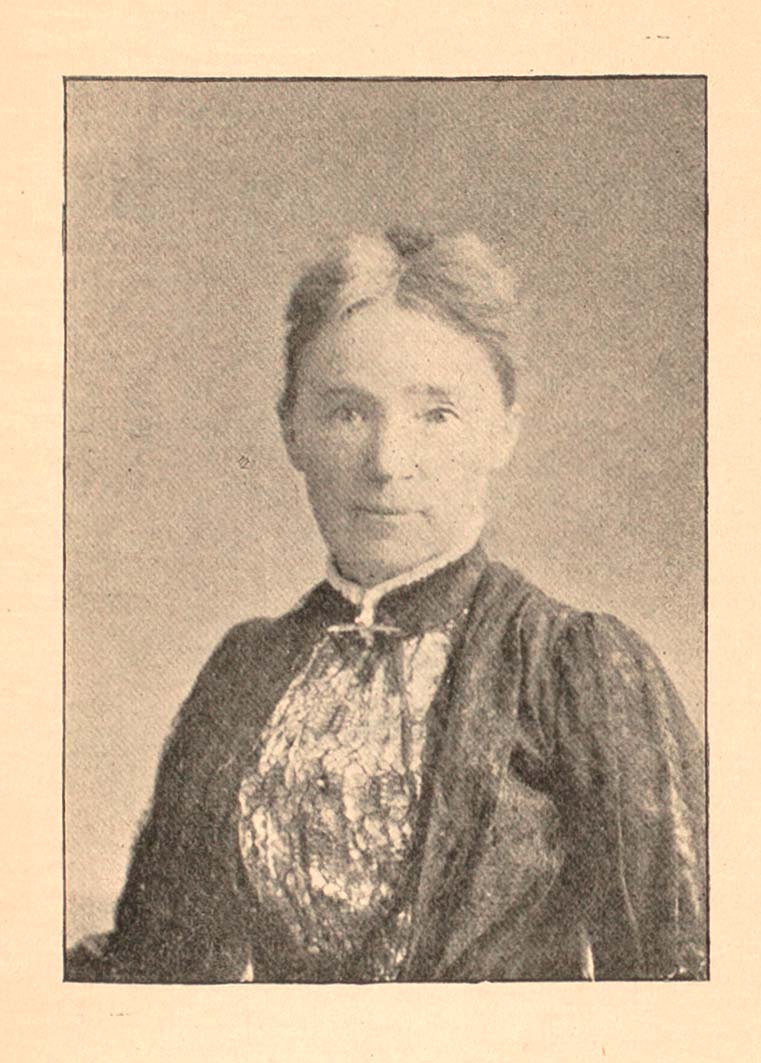 Mary tells of being devastated by Joseph’s death, and for many a night after his passing she found herself going to his grave at night to “lay my head down where his head rested, and cry till I had no more tears to shed.” Despite being far from home, newly widowed, and unable to understand a word of Anishinaabemowin, Mary still wanted to make good on her promise to her late husband and planned to commit the rest of her life on Earth exclusively to missionary work in the Saginaw Bay region before eventually being reunited with Joseph in heaven. However, a cousin of Joseph’s named Peter Sagatoo began to express an interest in her, and after two years of widowhood Joseph’s and Peter’s fathers approached Mary to assess her interest in the possibility of remarriage. Her initial reaction was to immediately pack her belongings and head to Bay City, but Peter hurried after her and managed to convince her to marry him the following day. With the support of her second husband, Mary forged ahead with her life and for the better part of three decades devoted herself to the missionary work that she and Joseph had originally planned to undertake together.

In many ways, Joseph Cabay was a quintessential example of what his white-skinned contemporaries would have considered a “Good Indian”—successfully assimilated, a practising Christian, dressed in western clothing, fluent in English and well-educated. He was described as deeply committed to spreading the gospel among his people, and sincere in his belief that Christianization, western education, and the adaptation of American culture would ultimately benefit them. That being said, he was also clearly proud of his indigenous background as evidenced by the traditional names included on his official calling card, his apparent willingness to incorporate Anishinaabemowin into public recitations, and his outspoken desire to improve the well-being of his beloved people. He appears to have managed the complex cross-cultural difficulties faced by Native Americans of the time with consummate skill and was able to command respect in both cultural universes he inhabited while maintaining his personal dignity. Had his life not been cut so terribly short, who knows what else Kewakezhig might have been able to accomplish before being called to the home in the skies.