While the origins of this obscure December 7 holiday are unclear, the tradition of having letter-writing days can be traced back to a time when handwritten letters were the most common form of communication. Before the invention of the telegraph, the typewriter, or the computer, handwritten letters were both an art form and an essential part of everyday business. To illustrate this history, we present the following examples from the Book and Manuscript Divisions of the Clements Library.

Numerous books offered advice on the etiquette of writing letters, improving one’s penmanship, and using handwriting analysis to learn about a person’s character. 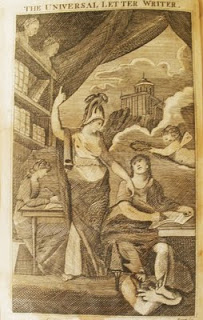 The universal letter-writer; or, Whole art of polite correspondence: containing a great variety of plain, easy, entertaining, and familiar original letters, adapted to every age… (1808)

Image caption: “MINERVA Recommending YOUTH of BOTH SEXES to acquire a knowledge of Writing Letters on the various Occurrences of Life, while Genius attends with a Crown of Laurel, and Ignorance, ashamed of being seen, is trampled under foot.”

Etiquette books like this one provided aspiring letter-writers with samples of letters to write for every occasion. This particular book includes such varied and useful examples as “From a young Gentleman to his Father claiming a promised Increase of Allowance,” “From a Gentleman to a young Lady of superior Fortune,” “From a Gentleman, who had long neglected a Correspondence to his Friend,” and “An ironical Letter to a Slanderer.”

If you would like to know how to properly issue a challenge for a duel, see page 120:

“Sir,
The epithets which you were pleased to bestow upon my late conduct, being, in my opinion, illiberal and impertinent, I demand that satisfaction due to injured honor, — and, therefore, insist upon your meeting me tomorrow, with whatever friend you may think proper, in order to settle this business according to the laws of honor.

I am, Sir,
Your humble servant.”

Dean’s analytical guide, to the art of penmanship (1805) 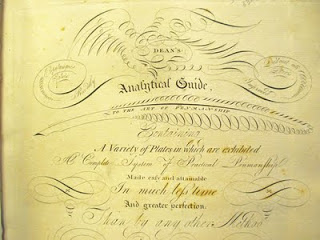 This book by Henry Dean offered, according to the title page, “a variety of plates in which are exhibited a complete system of practical penmanship made easy and attainable in much less time and greater perfection than by any other method in present use.”

The ornamental flourishes on the title page attest to the author’s own skill and dexterity. Good penmanship was an important consideration at this time for many people. It was an essential skill for aspiring businessmen to enter the world of commerce. Women of leisure were expected to develop a more delicate, feminine style of handwriting for social correspondence. Gentlemen of higher status, by contrast, sometimes affected an illegible scrawl to show that they did not have to work for a living.

Handwritten letters make up a large part of the manuscript collections at the Clements Library. Courtship letters, letters home from soldiers on the battlefront, business letters, and many other types of correspondence found in these collections can provide a glimpse into people’s lives in the past. These three examples illustrate the great variety of handwriting that can be found in such collections. 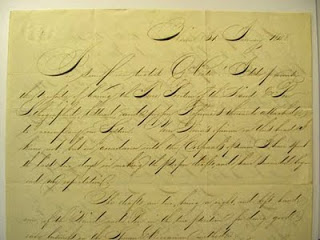 In the 1840s, Platt Rogers Spencer (1800-1864) and Victor M. Rice (1818-1869) developed a system of cursive handwriting, to facilitate the quick and legible authorship of letters and documents (for business and personal use). The Clements Library’s Victor M. Rice papers contain around 380 incoming letters to Mr. Rice, including a large selection of Platt Spencer’s correspondence. In the decades following their initial 1848 publications, “Spencerian penmanship” was integrated into schools across the country. 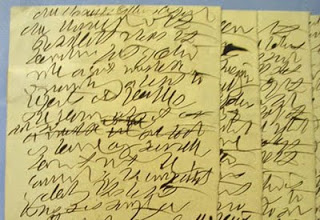 This manuscript, written by George M.D. Bloss (1827-1876), lawyer, editor of the Cincinnati Enquirer, and Democratic political writer, shows the importance of penmanship by negative example. So poor was his handwriting that only one compositor at his Cincinnati office was supposed to have been able to read it – and this employee was apparently retained for that purpose. 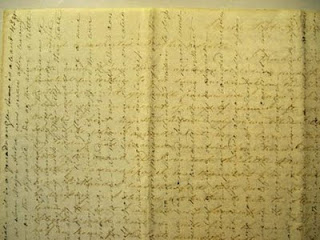 This image shows part of the first page of an extensive letter respecting a family move from Bridgton, Maine, to Sharon Centre, Ohio, jointly written by Sargeant and Martha Beach.

Cross-writing was a letter-writing technique employed to conserve space on costly paper and to minimize postal fees. The writer or writers would fill their paper, then return to the first page and continue by writing over the original text at a 90 degree angle. The practice was generally disliked for the difficulties it posed for the recipient, as cleverly noted by Charles Dodgson (Lewis Carroll) in his 1888 booklet Eight or Nine Wise Words About Letter Writing: “When you get to the end of a note-sheet, and find you have more to say, take another piece of paper – a whole sheet, or a scrap, as the case may demand; but, whatever you do, don’t cross! Remember the old proverb, ‘Cross-writing makes cross reading.'”

If these examples from the Clements Library collections have inspired you, consider writing a letter to someone today to celebrate this little-known holiday. Even in the age of electronic communication, sometimes a handwritten letter still says it best.