The Clements Library is pleased to announce that the following collections are now described online. These materials may be requested for use in the reading room when we are able to resume library services. Before planning your research visit, please contact us to verify in advance if our normal open hours for researchers have resumed.

Henry Murfey letter book (1855-1856) – Processed by Cari Griffin
The Henry Murfey letter book contains copies of 12 letters addressed to Henry, of Cleveland, Ohio, ostensibly from his deceased sister and father via a spirit-writing medium. The letters date from December 28, 1855, to September 20, 1856. The longest and most revealing of the letters details the experience of his sister Mary’s physical death, her arrival at a “large spiritual temple,” and her introduction to a spirit guide named “Flora.” Mary then described her visit to the planet Saturn and its inhabitants. 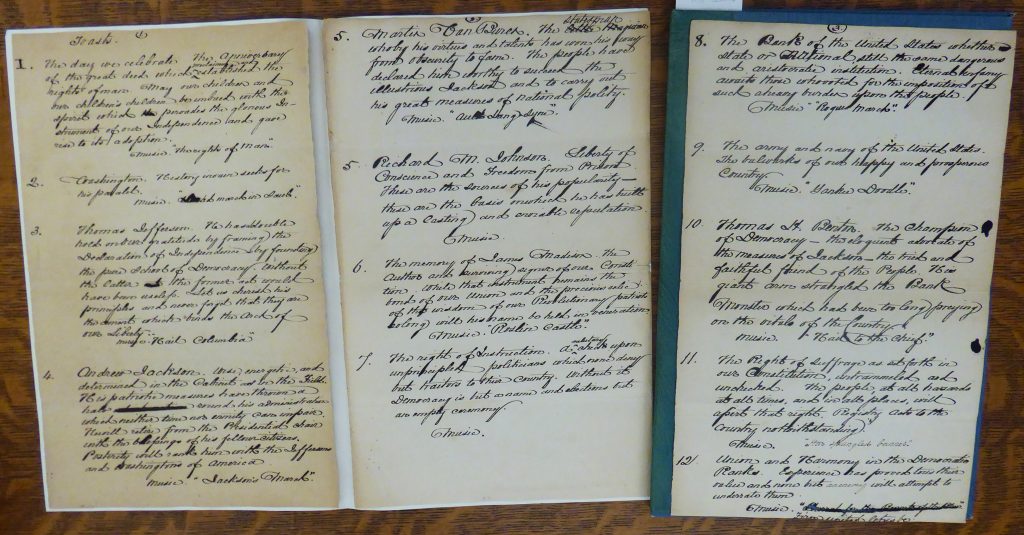 Letters, Documents, & Sermons, Blandina Diedrich collection (1652-1967, bulk 1726-1886) – Processed by Cheney J. Schopieray
The Blandina Diedrich Collection is a selection of manuscript items compiled by her son Duane Norman Diedrich and dedicated to her memory. The content of these letters, sermons, documents, and other materials reflect the life and interests of Blandina Diedrich (1903-1996), most prominently subjects pertinent to Christianity, home, and the family.

Letters, Documents, & Other Manuscripts, Duane Norman Diedrich collection (1595-2007, bulk 1719-1945) – Processed by Cheney J. Schopieray
The Letters, Documents, and Other Manuscripts of the Duane Norman Diedrich Collection is a selection of individual items compiled by manuscript collector Duane Norman Diedrich (1935-2018) and the William L. Clements Library. The content of these materials reflect the life and interests of D. N. Diedrich, most prominently subjects pertinent to intellectual, artistic, and social history, education, speech and elocution, the securing of speakers for events, advice from elders to younger persons, and many others.

Letters, Documents, & Other Manuscripts, E. L. Diedrich Collection (1789-1987, bulk 1795-1941) – Processed by Cheney J. Schopieray
The E. L. Diedrich Collection is a selection of manuscript items compiled by his son Duane Norman Diedrich and dedicated to his memory. The content of these letters, documents, and other manuscripts reflect the life and interests of E. L. “Bud” Diedrich (1904-1988), most prominently subjects pertinent to government, business, and patriotic music.

Ruben Hammer and Ruth McCall letters (1942-1945) – Processed by Sara Quashnie
This collection is made up of four love letters by Private First Class Ruben Hammer of the United States Army, written while stationed at Camp Howze, Texas, to Mrs. Ruth McCall of Dallas, Texas. The letters mostly pertain to when Hammer will have leave to visit McCall again and to previous romantic encounters.

Stark family papers (1913-1929, bulk 1920-1923) – Processed by Cheney J. Schopieray
The Stark family papers are comprised largely of the newlywed correspondence of lithographer Eugene R. and Catherine Dehn Stark of Brooklyn, New York, and Springfield, Massachusetts. The couple lived apart during the three years following their 1919 marriage so that Eugene could take a job in Springfield. During that time, the couple wrote deeply affectionate, sometimes sexually explicit letters expressing longing for one another and discussing finances, family updates, and the birth and infancy of their son John Eugene Stark.

In addition to the new finding aids above, the Clements Library has added descriptions of all of the individual letters and documents in several of our miscellaneous subject collections. In the following collections, researchers will find new and extensive box and folder lists that revolutionize access to items hidden within papers formerly described only by broad subjects or themes.

Quaker Collection, 1700-1888.
The Quaker Collection consists of miscellaneous letters, diaries, and documents relating to the religious and social history of the Society of Friends in America during the 18th and 19th centuries.