The Clements Library is pleased to announce that the following collections are now described online and may be requested for use in the reading room.

Moses Brown Diary in Memoirs of Major-General Heath, 1776-1777, 1798 – Processed by Theresa Dowker
This volume is a manuscript copy of Captain Moses Brown’s diary, August 9, 1776 to January 22, 1777, bound into the end of a copy of Major-General William Heath’s published memoirs [Memoirs of Major-General Heath (Boston: I. Thomas and E. C. Andrews, 1798)]. Captain Brown served in the 21st Massachusetts Provincial Regiment and the 14th Continental Regiment. His 11-page diary contains brief, daily records pertinent to the Battles of Long Island, White Plains, and Trenton, as well as returns of men belonging to Brown’s company that went to Trenton, and of prisoners taken at Trenton. The volume is extra-illustrated with two printed portraits, one each of Brown and Heath.

Church v. Warner Collection, 1813-1814 – Processed by Cheney J. Schopieray
This collection is made up of 16 documents pertaining to a slander trial in the Ohio frontier during the War of 1812. Aaron M. Church sued Wright Warner for accusing Church of being a Tory and for “aiding and assisting” the British. Church was ultimately successful in his suit.

Ontario (Sloop of War) Journal, 1829-1831 – Processed by Cheney J. Schopieray
This deck log for the sloop of war Ontario (1,004 pages), commander Thomas Holdup Stevens, contains daily information on the weather, ship location, movement and response to the weather, crew activities, sicknesses, and out-of-the-ordinary events, while serving in the Mediterranean Squadron. Also recorded in the volume are 28 port stops, the most frequent at Mahon and Gibraltar, for ship repairs, delivery of specie and other items, transport of diplomats, demonstrations of amity, and other purposes.

R. Henderson, Journal of a Cruise on the U. S. Ship Lexington, 1832-1833 – Processed by Cheney J. Schopieray
R. Henderson, a sailor aboard the U. S. sloop of war Lexington was assigned to keep a journal of the sloop’s activities during his voyage with the Brazil Squadron for the Falklands Expedition. This journal covers the period from December 13, 1832, to September 24, 1833, and Henderson’s frequent (but not daily) entries provide an account of a sailor’s life aboard the American warship.

William N. Ames Logbook, 1832, 1838 – Processed by Cheney J. Schopieray
This volume largely consists of William N. Ames’s logbook entries for the 369-ton whaleship Martha, Master Joseph Wheldon, January 14-March 25, 1838 (14 pages and fragments of pages). The Martha departed Hudson, New York, heading for the Indian Ocean with stops at Gough Island and Madagascar. The remainder of the volume is pages or fragments of pages for the ship Alexander Mansfield, 1832, including the poem “The Yankey Privatear” (4 pages); one letter fragment; and pages of additional accounting and poetry (9 pages).

Autumn (Barque) Abstract Log Book, 1845-1849 – Processed by Ellen Gleason
This volume contains extracted log entries from the Barque Autumn‘s whaling voyage from Stonington, Connecticut, to the Indian Ocean and South Pacific between 1845 and 1849. Captain Edwin Augustus Perry commanded the vessel. This abstract log provides a condensed version of the official log, only documenting days the crew saw or captured whales. The volume contains 48 pencil drawings of whales and whaling scenes.

Marie Taber Logbook and Journal, 1853-1861 – Processed by Ellen Gleason
Marie “Alida” Taber, wife of whaling Captain George Taber, kept daily records of wind direction, speed, weather conditions, geographic location, and crew activities during two whaling voyages: the Brig Magdalene‘s 174-day voyage from Honolulu to Connecticut, January-July 1853, and the Barque William Wilson‘s 1,192-day voyage from Rhode Island to the island of Rodrigues in the Indian Ocean, May 1860-January 1861. The volume also contains personal journal entries kept by Marie Taber during her time in Acushnet, Massachusetts, while her husband served aboard the Barque William Wilson from October 1857 to 1859.

George W. and William F. Gragg Collection, 1853-1864 – Processed by Cheney J. Schopieray
This collection is made up of 12 letters and one manuscript map pertaining to George W. Gragg of the 6th Massachusetts Infantry and the U.S. Navy during the Civil War, and his father William Gragg, a career surgeon’s steward in the U.S. Navy. The bulk of the papers date between 1862 and 1864, respecting in part George Gragg’s service in and around Suffolk, Virginia, in early 1863. The manuscript map depicts fortifications around Suffolk at the time of the April-May 1863 siege. 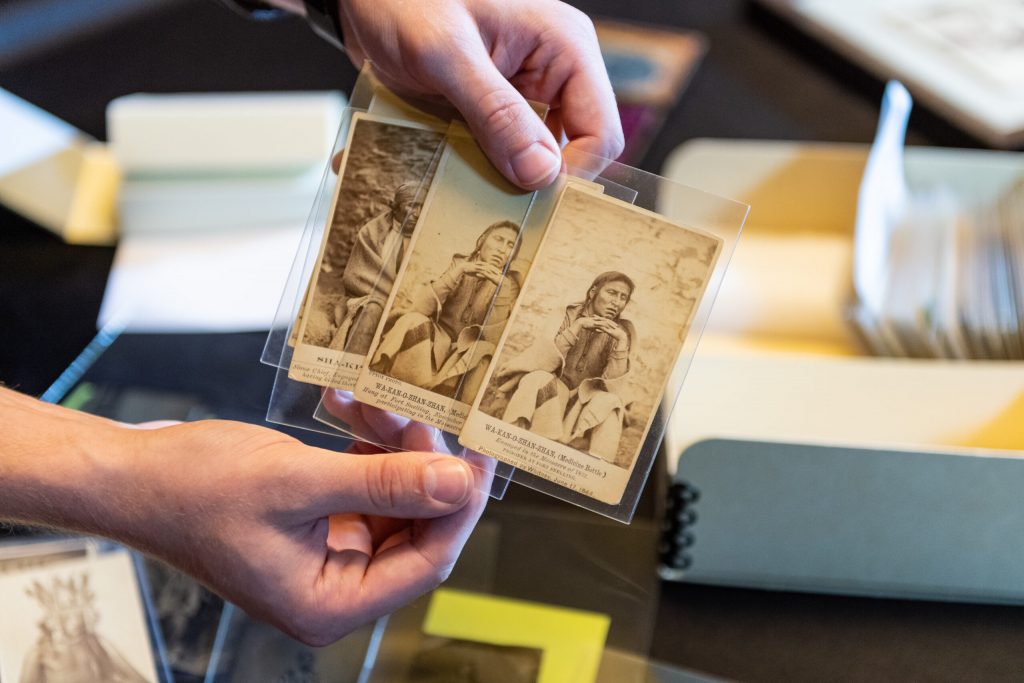 Richard Pohrt Jr. Collection of Native American Photography (ca. 1855-1940, bulk 1862-1900) – Processed by Andrew Rutledge and Jakob Dopp
The Pohrt Collection contains around 1,000 individual photographs, 12 albums, 3 portfolios and 1 piece of realia pertaining to 19th and early 20th century Native American history and the westward expansion of the United States of America. Over 70 Native American tribes and subtribes are represented in these images, with tribes of the Great Plains and Great Lakes regions particularly well-represented.

Miniature Moving Panoramas (ca. 1868-1878) – Processed by Erin Berger
This collection consists of three miniature moving panoramas. There are two educational toy panoramas, “The Historiscope: A Panorama & History of America” and “The Myriopticon: A Historical Panorama of the Rebellion,” both of which were created by Milton Bradley. The third item is a dual scroll lithograph produced by the Excursion View Co. titled “Excursion Views of Narragansett Bay and Block Island.”

George E. Boggs Collection (ca. 1845-1947) – Processed by Louis Miller
The George E. Boggs collection contains one photograph album, one letter, and one box of ephemeral materials pertaining to the military service of George E. Boggs and, to a lesser extent, his brother Hamilton Irwin Boggs during World War I. A number of images of the Boggs family prior to and after the war are also present.

Sophie Toclanny Photograph Collection (1910-ca. 1960, bulk 1910-1913) – Processed by Les High and Jakob Dopp
This collection consists of 25 postcards and 2 photographic prints, the majority of which were sent by Chiricahua Apache woman Sophie Toclanny to the family of George K. and Susan E. Geiser in Reading, Pennsylvania, in the early 20th century. A number of real photo postcards show Sophie and other members of her family at the Mescalero Apache Reservation.

Florida Vacations and Silent Movies Photograph Album (1916-1920) – Processed by Erin Berger
This album contains approximately 300 images of people vacationing in southern Florida as well as views of production sets of several Fox Film Corporation silent movies including The Jungle Trail (1919), A Woman There Was (1919), and A Fallen Idol (1919).

Thelma Clevenger School Friendship Book (1920-1925) – Processed by Erin Berger
This collection consists of one map of Freedom, Ohio, around 225 photographs of friends, family, and students known to Thelma M. Clevenger (1905-1985), as well as 38 pieces of ephemera.

Louis Miller WWI Exhibit Materials (1917-1930, 2018) – Processed by Louis Miller
The Louis Miller WWI Exhibit Materials consist of an assortment of visual materials and realia compiled by Clements Library archivist Louis Miller for an exhibit in autumn of 2018 marking the centennial of the Armistice. The vast majority of materials are related to the experiences of the American Expeditionary Forces during the First World War. The accompanying pamphlet that was produced for this exhibit is also available online.

Robert S. Martin Collection, 1941-1949 – Processed by Jayne Ptolemy
This collection consists of the outgoing correspondence of Robert S. Martin, primarily to his wife Margaret (Roth) Martin, as well as photographs and other materials documenting his service with the United States Army during the Second World War. The papers detail his relationship with Margaret, Army training at Camp Callan, his education with the Army Specialized Training Program at Compton College and Texas A & M University, and his service with the 3483rd Ordnance Medium Automotive Maintenance Company, near Tacloban City in the Leyte Province, Philippines.