The Clements Library is pleased to announce that the following graphics collections are now described online and may be requested for use in the reading room.

The Andrews’ Raid scrapbook and telegraph ledger contains newspaper clippings dating from 1887 that recount the story of Andrews’ Raid written by William Pittenger. Other clippings, almost all of which focus on the United States Army, are also included in the scrapbook. The majority of these clippings are glued onto the page, but some are loose. This scrapbook, whose compiler is unknown, was originally used as a telegraph ledger book for the Baltimore and Ohio Railroad, and more than half of the volume still has these records visible.

This collection of small paintings is housed in an embossed leather carte-de-visite album with a single metal clasp. Within are 12 landscape oil paintings of Lake Champlain, Lake George, and the Glens Falls area. Each image includes a caption denoting location. 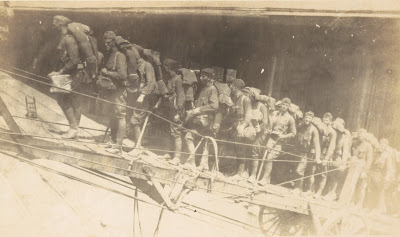 The Howard F. Barnum World War I photograph album contains 216 items relating to Barnum’s service during the war. A majority of the collection are personal photo-postcards of his time overseas and postcards from his travels with the Army of Occupation in France, Germany, and Luxembourg. Also included are photographs, letters, a print, and ephemera.

The United States Signal Corps Photographic Collection contains approximately 1,630 photographs of the American Expeditionary Forces taken by the Signal Corps during WWI throughout the Western Front. The collection is divided into three volumes and one box, all loosely arranged by topic. General topics include destruction, battlefields and trenches, artillery, monuments, and postwar celebrations.

This collection contains 11 pencil sketches of the Missouri and Ohio Rivers and their surrounding cities. The sketches depict cityscapes, scenic and street views.

The Harry Peter Boot photograph album contains 16 photographs from Harry Boot’s time as a missionary with the Reformed Church in Xiamen, China from ca. 1903 to 1907.

This collection consists of one bound volume including both financial receipts and sketches. The first part of the volume contains 38 pages of receipts of payments from John Sunnocks to various people he had transacted business with in the late 18th century. The rest of the volume contains sketches circa 1880, attributed to Newbold Hough Trotter, an American artist known for his work illustrating natural landscapes and animals.

This collection consists of six pages of pencil and ink sketches dated from 1861 to 1863 and signed J.M.S. The sketches depict various scenes of the American Civil War from the Union perspective including barracks, soldiers, and steamships related to the blockade of the Confederacy.