The Clements Library is pleased to announce that the following collections in our Graphics Division are now described online and may be requested for use in the reading room.

The Clements Library is now open for research by appointment. All researchers are encouraged to contact Clements Library staff for guidance on how to complete their research with both digital and physical materials. Please contact us with any questions about your research.

The Wella and Pet Anderson spirit drawings photograph album contains 26 cabinet card photographs of pencil-drawn portraits of spirits of various historical figures made by a spiritualist couple in San Francisco, California in the early 1870s.

The drawings of spirits by Wella and Pet Anderson that are photographically represented in this album were described as members of “The Ancient Band,” a collective of prominent spirits of historical figures who had supposedly used their combined wisdom to positively impact mankind over the course of many centuries.  While many of these figures were real people, such as Alfred the Great, Confucius, and Plutarch, numerous fictional characters were also counted amongst their ranks.  Several members were even purported to have belonged to the lost civilization of Atlantis, including the individual pictured here named “Orondo.” 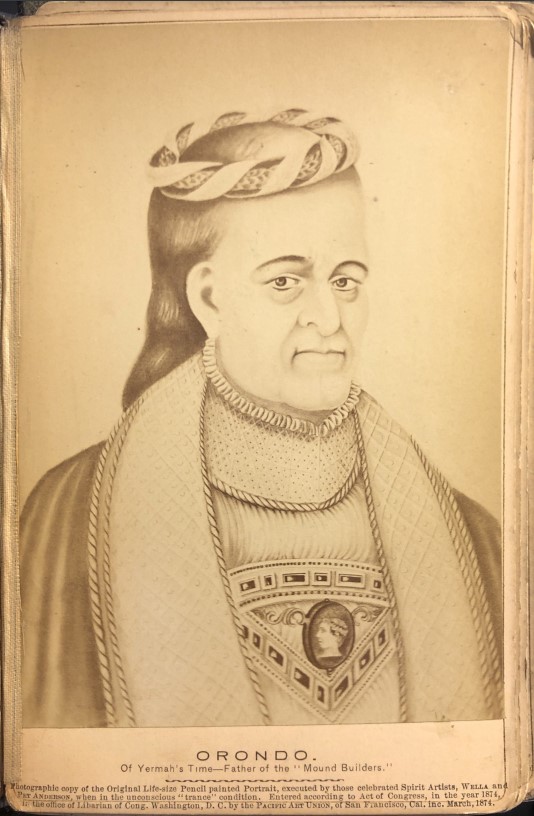 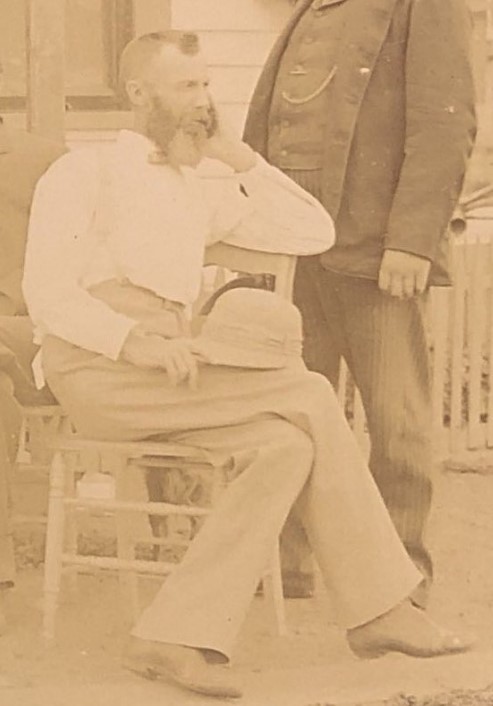 The Thomas M. Bridges Crow Creek and Fort Hall Reservations collection contains approximately 242 photographs in 5 albums, 13 loose photographs, a Catlinite pipe bowl, and a ball headed war club. These materials were associated with Dr. Thomas Miller Bridges, a physician and surgeon who was employed on Native American reservations during the late 19th and early 20th centuries.

Among the Library’s many commonplace books and memory albums is this unique example compiled by Edith A. Moore Frist (Pictured Left), which includes photographs of some of the signers.

The photograph to the right is accompanied by a typed caption stating “500 wagons for issue to the Indians at the Crow Creek Agency, S.D.” 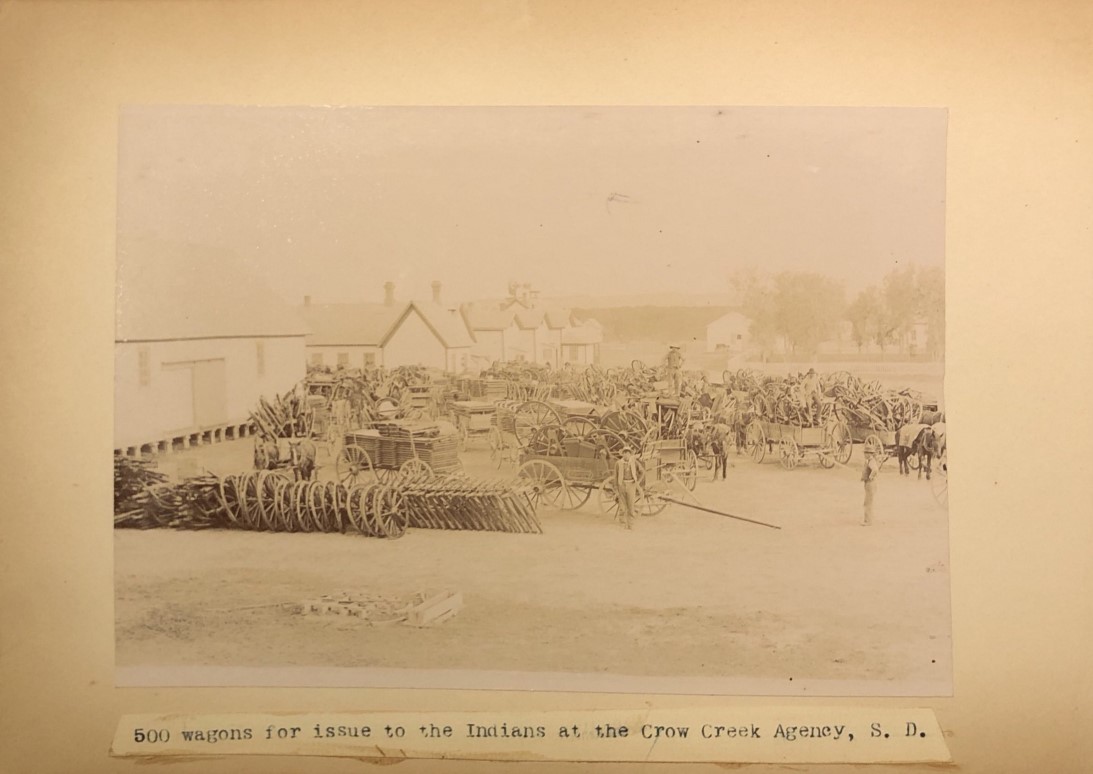 Watercolor depiction of Fort Pembina, Dakota Territory, ca. 1858.  While this piece is unsigned, it bears strong similarities to other works by Eastman.

The Mugshots collection consists of approximately 100 photographic portraits produced between 1892 and 1920, the vast majority of which are mugshots.

Lake Superior Scenery consists of 26 watercolor sketches produced by artist Albert L. Rawson during a steamboat tour of the Great Lakes (primarily Lake Superior) in 1865. The sketches were compiled into a presentation album gifted to Louise C. Ely, a fellow traveler befriended by Rawson during the tour. 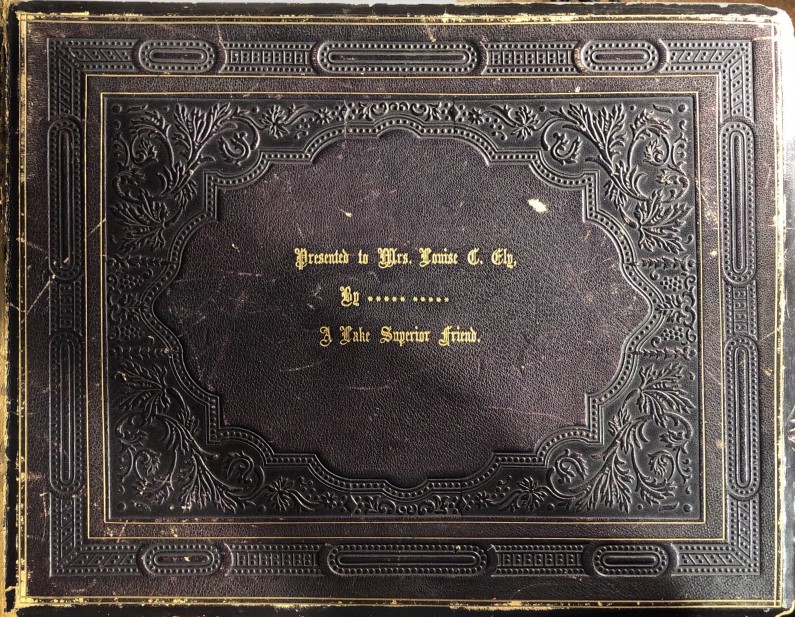 The front cover of this album bears a cryptic message of presentation to Mrs. Louise C. Ely by her “Lake Superior friend,” who is identified elsewhere in the album as Albert Leighton Rawson.  It is possible that Rawson (a noted engraver, artist, author, and conman) targeted Ely, a recent widow and wealthy individual, with an ulterior motive in mind. 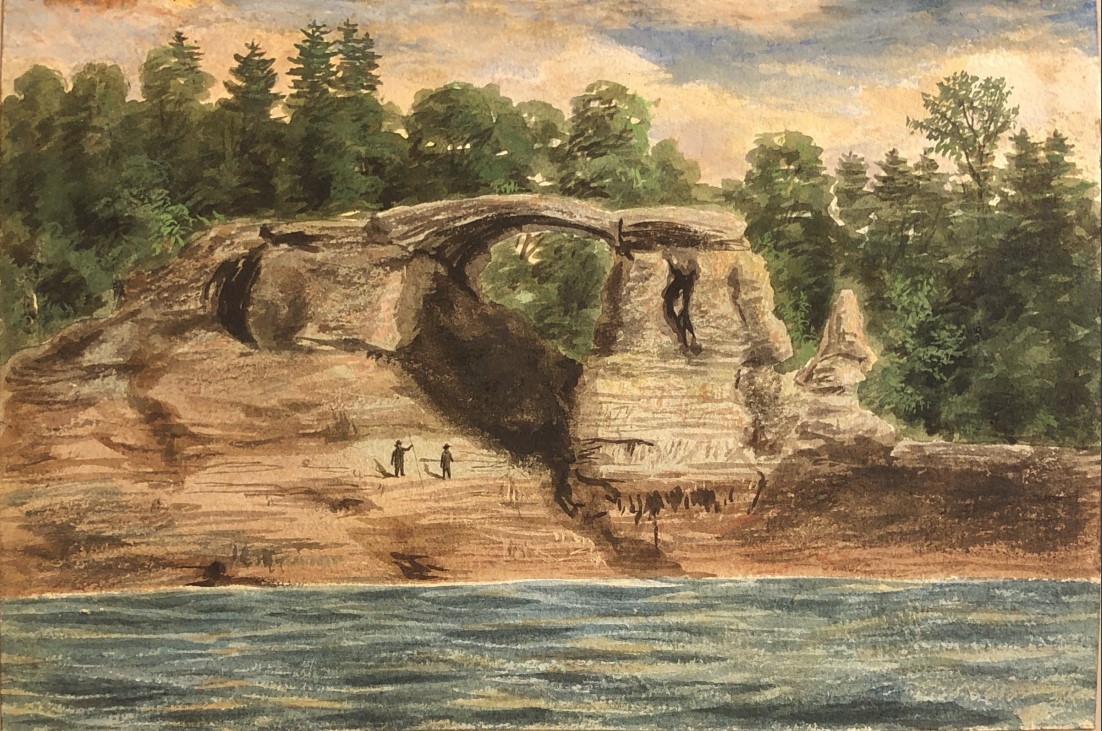 Many of the watercolors in this album depict scenes from Pictured Rocks National Lakeshore, including this view of Chapel Rock.

The Thomas Smith collection includes a disbound sketchbook of eighteen watercolors and six drawings depicting scenes in the northeastern United States and Canada made between 1820-1826 as well as three letters written by Smith between 1820-1822.

The Dennis K. Sullivan photograph album contains 28 images compiled by Detroit, Michigan-based detective Dennis K. Sullivan, including 27 portraits primarily of men and women accused of various crimes, the majority of whom are identified through inscriptions.

Views of Early St. Louis contains 27 photographs of scenes from St. Louis, Missouri, between 1840 and 1895 that were assembled by German American photographer Emil Boehl during the late-1890s, including several photographic reproductions of various works by other artists such as Daguerrean photographer Thomas M. Easterly.