Home » About » Blog » A nesting doll of copies: a digital facsimile of an engraved facsimile of a medieval manuscript copy of a Roman map

This image comprises all the engraved segments of a half-size facsimile copy of a medieval manuscript map known as The Peutinger Map. The engraved facsimile is found in later editions of the Theatrum Orbis Terrarum, edited and published by Abraham Ortelius (and often noted as the “first” modern atlas). The Clements Library’s copy is in the 1624 Theatrum (Atl 1624 Or).

All engraved segments of the Ortelius Peutinger map, digitally stitched together 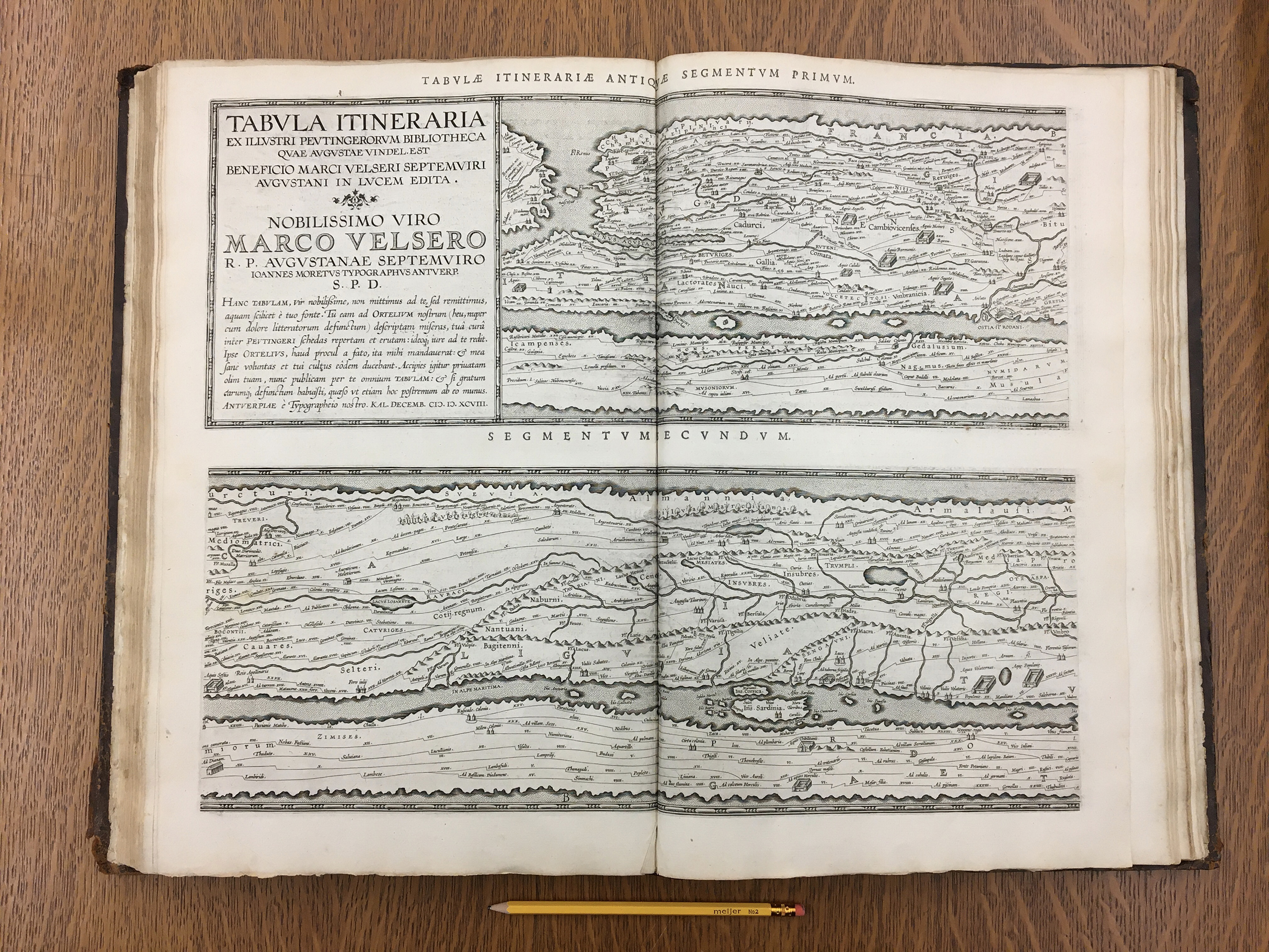 It is well known to map historians, but as it does not show America or anything related to American history, many researchers familiar with the Clements have not given it much notice. But as a former Latin teacher who embraces most things Roman, I have always been fascinated by this map and used to show it regularly (in facsimile) to my students. The definitive study of the Peutinger Map (or the “Peutinger Table”) is by Richard J.A. Talbert—Rome’s World: The Peutinger Map Reconsidered, Cambridge University Press (2010).

The original Peutinger Map is a 22 foot long, 1 foot high (6.72m x 34 cm) map drawn in colored ink on segments of parchment, dating from the 11th century. It itself is a copy of a 4th century Roman map of the known Roman world, stretching from the British Isles in the west to the Indus Valley in the east, and encompassing the entire Mediterranean Sea. Because of its extreme breadth and shallow height, this world map is projected in such a way that the geography of all the regions is squished in an west-east direction. In its original form, it probably hung in a public place, perhaps in a basilica (a Roman law court and official meeting place, before the term was used for a religious house). The Peutinger Map is often noted by historians for its depiction of the Roman road network, with mileages, throughout the empire, and for the extraordinary number of place names labeled on it, many only attested to by this map and not by other literary sources.

The parchment map is called the Peutinger Map because it was owned by a German antiquarian and scholar, Konrad Peutinger (1465-1547), who had inherited it from his good friend and fellow antiquarian scholar, Conrad Celtis (1459-1508), who in turn had acquired it perhaps from a monastery library (its exact provenance is unknown). Aware of its rarity and importance, Peutinger wished to prepare a copy of the map for printing and publication, but he died before this could happen. The Antwerp engraver and geographer, Abraham Ortelius, had heard about the map and also wanted to publish a facsimile. This came to pass finally in 1598, when Marcus Welser, a family friend of the Peutinger heirs, was able to see the map and organize copying it at half size; he supervised the engraving on eight plates, which were printed by Johannes Moretus, of the great printing house of Plantin in Antwerp. The original Peutinger map is in the Austrian National Library and may be seen in a digitized version. It is a salutary exercise to compare the original to the Welser/Moretus version as published in the later edition of Ortelius’ atlas, Theatrum Orbis Terrarum. One can see how the copyist was limited by working in black and white and the hard edges of engraving techniques; even the expression on the face of Roma is softer on the medieval map. 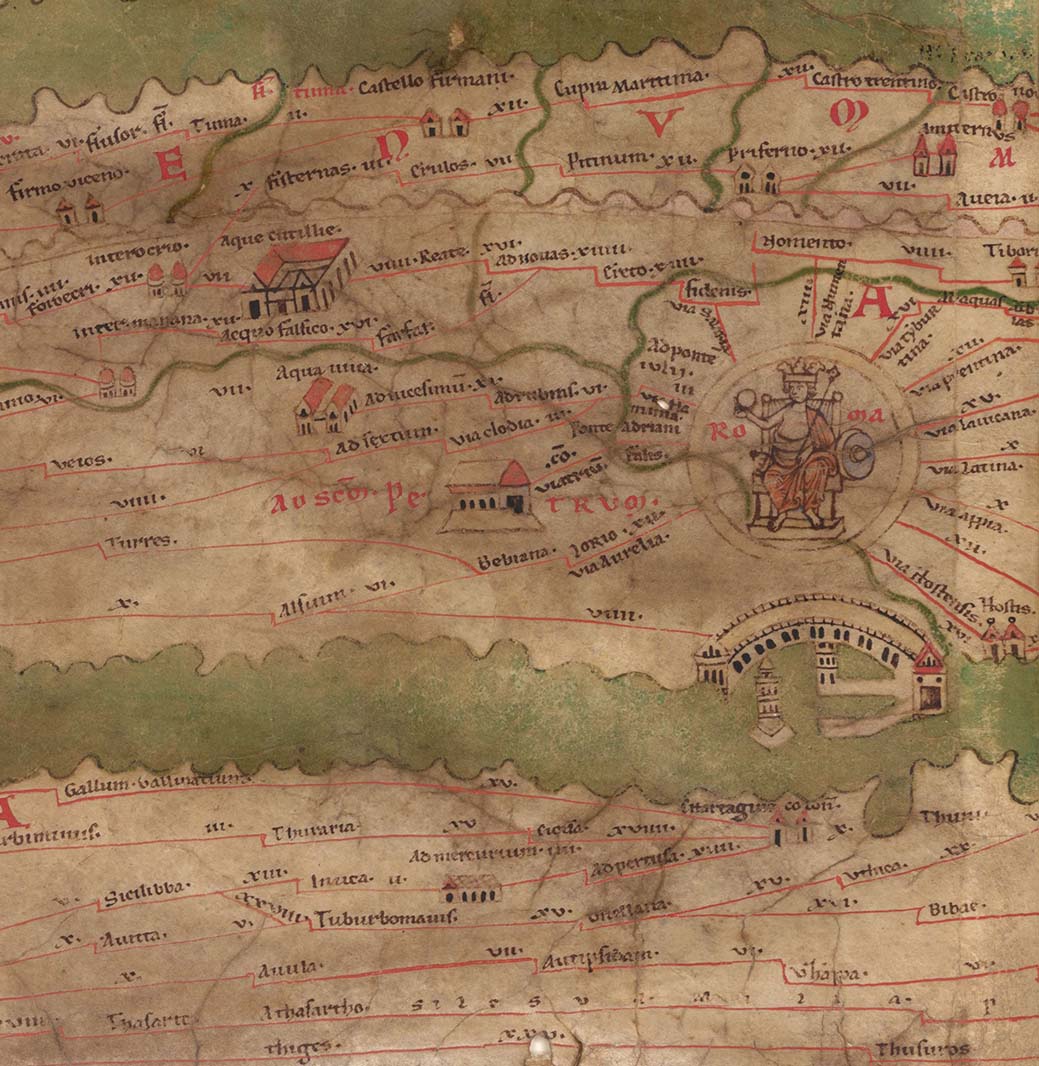 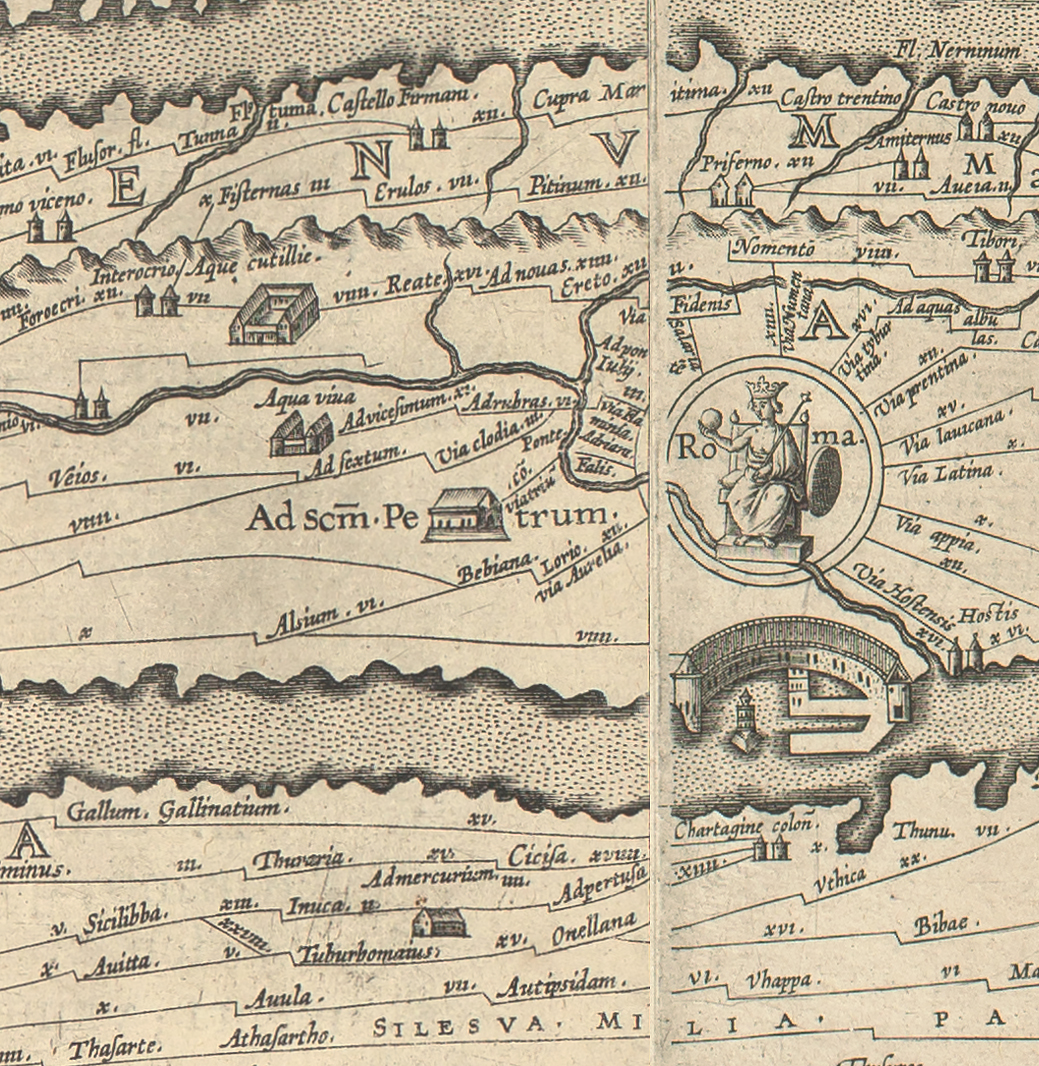 A portion of the Peutinger map showing the area around Rome (left) compared to the same area on the Ortelius facsimile. (right)

This digital facsimile was produced by Clements Library Digitization Technician Chris Ridgway, who scanned the eight segments of the Ortelius original and then stitched together the segments as they would be seen, one after another, by a viewer looking at the original Peutinger Map. Chris noted: “Digitizing and stitching the map segments together (16 of them!) really showed me the sense of scale and attention to detail of a map like this. . . . Digitizing a map like this often depends on a few things, and images scanned out of a bound volume sometimes require use of a computer to correct for lens distortion more than flat collection items. Using a computer, I also adjusted the opacity of each segment at times to stitch together the full map.”

My thanks to Chris Ridgway for making this image that brings the awe of the Peutinger Map to life. It was precisely the effect that the Roman viewer was meant to have in contemplating the expanse of the Roman world.