That look of surprise and joy on a map curator’s face can only mean one thing: something fine has just landed in his division. And what better acquisition for the Clements Library than a pair–and not just any pair–of Wilson globes. 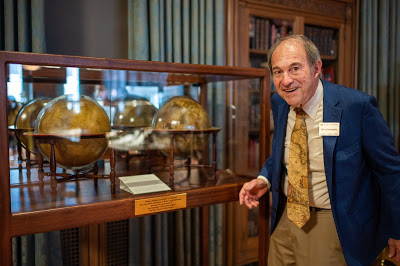 And what, we hear you ask, are Wilson globes? These two globes–terrestrial and celestial–were produced by Vermont farmer and blacksmith turned globemaker, James Wilson (1763-1855) in the first half of the nineteenth century, giving him the (exaggerated) moniker of “America’s first globemaker.”[1] 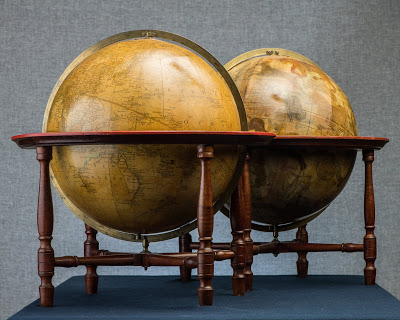 As they are dated 1811 (terrestrial) and 1812 (celestial), they are among the earliest globes that Wilson produced; his earliest are dated 1810. The 1811 globe is particularly noteworthy in that it bears the amended title: “A new American terrestrial globe.” 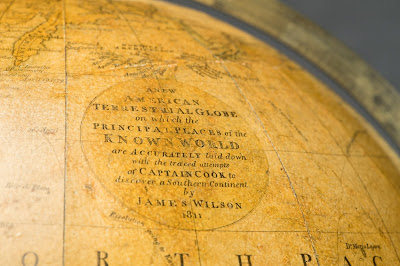 By calling them “American” Wilson insured that his globes were in a category different from all others on the market. American made and meant for American consumption, they were available in three handy sizes–13, 9, and 3 inches in diameter–at affordable prices (a broadsheet from 1832 advertises them at $55 for the most expensive stand to $3 for the 3-inch globe on fancy mounting. See a mini at the Library of Congress). The fact that he did not produce large globes of 24 or 36 or 48 inches, more typical for a gentleman’s library or an institution, demonstrates his awareness of his clientele’s pocketbook and available space for storage and display. Wilson’s goal was to allow the many, rather than the few, to have access to a beautiful piece of furniture that encompasses a world of knowledge.

Like many a map and globe maker before him, Wilson did not train to become a globemaker. He followed a fancy that turned into a dream that became a reality after intensive self-education, sweat application, and market “perspication.” Wilson was born in Londonderry, New Hampshire, and farmed 100 acres nearby, living in the log cabin he had built, until moving north to Bradford on the Connecticut River in 1796. As Bradford was only a mile north of Hanover, he took the opportunity to visit a friend at Dartmouth College where he saw (perhaps for the first time?) two globes. Fascinated by these three dimensional models of the earth and sky, he was determined to create a pair himself. Lacking much formal education, but possessing a prodigious appetite for reading, he bought the 18-volume third edition of the Encyclopedia Britannica with savings of $130 (perhaps around $2600 in buying power today) and by reading carefully the articles on “Geography” and “Globe,” taught himself the rudiments of globe production.[2]

The article on “Globe” showed him how to smooth and shape the ball of papier-mâché layers and plaster overcoat on which globe gores would be pasted. But to make globes to sell required learning how to engrave and print from copperplates, the best means of graphic reproduction available in the early years of the nineteenth century. To acquire this skill, he walked the 200 miles from Bradford, down the Connecticut River valley to New Haven, Connecticut, where another self-taught engraver and mapmaker, Amos Doolittle, had established a far-reaching reputation. Doolittle had engraved the maps in Jedediah Morse’s Geography Made Easy (1784), the first geography book published in the United States and a significant contribution in weaning American culture from British dominance.

After much trial and error (family lore claims it took him nearly a year), Wilson succeeded in engraving his globe gores on a large copperplate, although he had difficulty getting his meridian (longitude) lines proportional enough to fit the round ball of the sphere. To resolve this, he set out to visit the Reverend Morse in Charlestown, Massachusetts, whose disappointing advice was to start over again. Wilson persevered, and by January 1810 he had not only created a terrestrial globe but had even had sold two of them. Later in the year he recorded the sale of seventeen more. At least one of the pairs had sold for fifty dollars, helping to recoup his expense for buying the Encyclopedia Britannica. 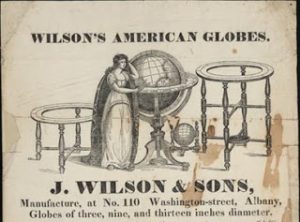 By 1811, Wilson had renamed his globes “A new American Terrestrial/Celestial Globe,” and soon opened a shop to manufacture globes on a commercial basis, aided by his sons Samuel, John, and David. Benefitting from the absence of European competition during the War of 1812, Wilson and his sons expanded their line to three sizes and several styles of stands. They built another factory in Albany, New York, in 1815 and by 1817 had opened another shop to meet the increasing demand for their globes, “equal, and in many respects, superior, to those manufactured in Europe.”

Wilson had not only found a niche market for quality globes at affordable prices, he also capitalized on the need for globes in the burgeoning number of classrooms filling the growing American educational system. Academies and schools, whether public or private, required books, maps, and globes for teaching geography and history. Jedidiah Morse declared independence from British geographies by writing Geography Made Easy and American Geography, which integrated the history of the fledgling United States with its geography. Morse, along with Noah Webster, the creator of spellers and grammars that trained school children in “American” English, were both convinced that teaching with American-authored texts was “a precondition to loyalty and civic identity.”[3] Using the economical Wilson globes in the classroom meant that no child would be deprived of an opportunity of “seeing the world.” Pioneer educator Emma Willard described one of the essentials of the Female Seminary or boarding school as “A library, containing books on the various subjects in which the pupils were to receive instruction; musical instruments, some good paintings, to form the taste and serve as models for the execution of those who were to be instructed in that art; maps, globes, and a small collection of philosophical [i.e., scientific] apparatus.”[4]

The Wilson globes are fitting additions to the Clements Library collections, which can already boast the 18-volume Encyclopedia Britannica of 1797, the texts of Morse and Webster, as well as the seminal American history atlases by Emma Willard. Taken together, they represent both the democratization of education and the access to knowledge that marked the society and culture of the early United States. Not made for the elite, Wilson globes were meant to be used, studied, and appreciated by all. In the Clements Library, they certainly will be! 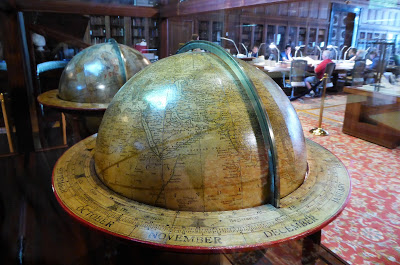 The Wilson globes were acquired with the help of several donors whose contributions allowed their purchase and installation in a specially built case. Their acquisition was made in honor of the retiring map curator, Brian Leigh Dunnigan, who completed 23 years of service to the Clements and to the map history profession, in June 2019. It is fervently hoped that Brian will return as a researcher to the library to have a closer look and study of these two fine globes.

[1] The honor of being “first” American globemaker probably belongs to another resourceful craftsman: the shoemaker and tanner Samuel Lane (1718-1806), from Stratham, Massachusetts, whose pine terrestrial globe from the mid-1700s is now in the New Hampshire Historical Society collection.