Home » About » Blog » “Notions of Freedom”: Slavery and Escape in the Southeastern Caribbean

“Notions of Freedom”: Slavery and Escape in the Southeastern Caribbean

Guest post by Patrick T. Barker, Clements Library 2019 Price Fellow. An earlier version of this post was published on April 7, 2020; it has been retitled and expanded with additional material.

During the early 1770s fugitives from slavery fled by sea from the then-British Caribbean colony of Carriacou, an island a short sail from Grenada in the southeastern Caribbean. The fugitives, wrote the British Windward Islands’ governor William Leybourne in 1773, “escape from us in boats to some of the nearest Spanish settlements,” induced by “unknown agents” who had “inculcated” in the escapees “notions of freedom.” Despite “repeated applications” to Spanish officials, Leybourne explained, “no redress [could] be procured.”[1] Those who fled Carriacou left a plantation colony where around 2,700 enslaved people labored, primarily on cotton plantations, under the supervision of around just one hundred white settlers.[2] To Carriacou’s south were several Spanish territories including Caracas, Cumaná, Margarita, and Trinidad. In the latter province, Spanish policies first decreed in 1680 theoretically offered sanctuary to fugitives, typically in exchange for Catholic conversion. In 1704, a similar proclamation was issued in nearby Venezuela. In 1750, the Spanish issued a Royal Decree stating that fugitives who escaped from Protestant-governed territories to any of Spain’s American domains could be declared legally free as Catholic converts.[3] 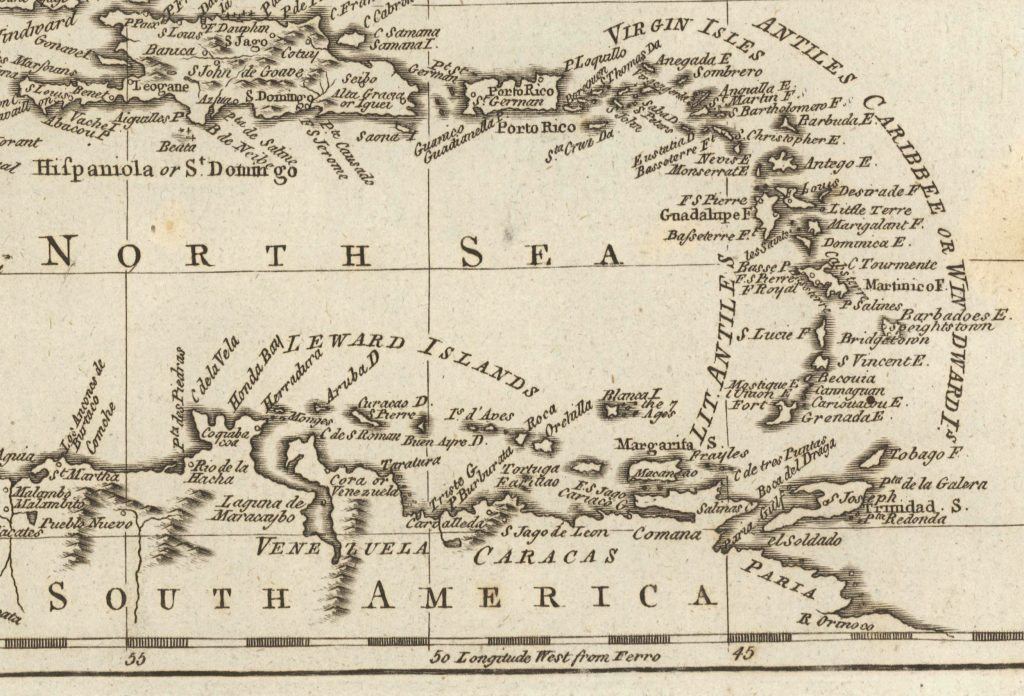 This detail, from a ca.1810 map of the West Indies, shows the proximity of the British Windward Islands of Grenada/ Carriacou, and the nearby Spanish coast.[4]

As Julius S. Scott’s The Common Wind shows us, news of such decrees traveled widely and quickly in the Caribbean.[5] Over time and between colonies, the mobile and masterless – small time traders and sailors, smugglers, runaways, rebels, deserters, and dock workers – circulated news and rumor that often found its way to those who remained confined on plantations. As Scott showed in such vivid detail, the mobility of these people posed a “steady undercurrent of opposition to the ‘absolute’ power of masters, merchants, and military officers” in the colonial Caribbean at-large.[6] As Scott put it, “local rulers were no more able to control the rapid spread of information than they were able to control the movements of the ships or the masterless people with which this information traveled.”[7] The commercial routes through which these people operated opened up subversive communication channels, “as well as tempting routes of escape.”[8]

That Carriacou’s fugitives managed to undertake such daring acts of escape, reminds us that despite the barriers presented by the Caribbean sea, enslaved people still found ways to flee and travel to places they believed could improve their lot in life. In details contained in the Henry Strachey Papers at the William L. Clements Library, we also see possible hints of the masterless people who may well have shared information with these fugitives that aided their escape. When Carriacou’s fugitives are mentioned in the island’s survey, Leybourne was sure to note that their “notions of freedom” had emanated from elsewhere, namely from “unknown agents” who he implied had visited the island. Who, precisely, these “unknown agents” were, is unclear. But their inclusion in Leybourne’s brief note suggests that, despite their best efforts, colonial elites could never fully control or suppress the circulation of subversive information, one of several enduring lessons we learn when reading The Common Wind.

Seeking to understand who these “unknown agents” may have been forces us to speculate. As The Common Wind demonstrates, an important means through which subversive information traveled in the 18th-century Caribbean was via commercial exchange, not all of which was lawful. Despite imperial regulations opposing such practices, illicit commerce between empires had long linked colonies in the region.[9] In Carriacou and neighboring Grenada, British authorities were all too aware of such practices. In the same survey series that contains the brief mention of the fugitives, Governor Leybourne noted contraband trading between the British islands of Carriacou and Grenada, and the colonies of competing empires close to them.[10] In Grenada, Leybourne noted contraband trade between the island and French and Spanish territories. Traders from the island bartered British manufactures in return for Spanish cattle and mules for the island’s sugar industry. The survey further noted trade in other items from the French islands of Martinique and St. Lucia.[11] Had the “unknown agents” described by Leybourne been involved in contraband trade in the region, we can assume that they likely knew a great deal about the region’s island and mainland geographies, further to the imperial laws that governed them. To remain undetected and uncaptured by government officials, they will have understood well the timing and volume of imperial patrols policing certain maritime routes. And if smugglers, they will have almost certainly known the most navigable routes linking islands like Carriacou and Grenada to the nearby Spanish territories in the region, where contraband trading had a long history.

Maritime Fugitives and the Southeastern Caribbean

Leybourne’s brief account of Carriacou’s fugitives in his survey gestures toward a complex regional dynamic. My time at the Clements Library inspired further research in other archives, both in the United States and Europe, to try and trace the struggles of enslaved people who fled British territory by sea in the late 18th century. As my research evolved, the geographies involved broadened. I found a more complicated set of connections between people in Carriacou, other British territories in the region, and the nearby Spanish territories than I had previously encountered. Between the 1760s and 1780s, British authorities in the region complained of enslaved people escaping by sea from several islands including Carriacou, Grenada, and Tobago. Their alleged means of escape ranged, as did their reputed destinations. In some cases, enslaved people were said to have fled by rowing canoes, while others reputedly seized vessels. Complicating the picture, not all cases of disappearance were escapes. For instance, French planters who fled British territory and settled in neighboring Spanish territory were accused of returning to British territories to take away enslaved people over whom they claimed ownership. In war-time, authorities even noted kidnapping by privateers. In some instances, authorities also confronted difficulty learning what became of escapees. Other fugitives were reported to have made it to nearby Trinidad, Margarita, or mainland Spanish territory.[12]

When maritime escapes to these territories did occur, however, thinking through inter-imperial communication channels can help us contextualize why such cases occurred in the moments they did. As The Common Wind shows us, for instance, in August 1789, Spanish Trinidad’s governor publicized a decree stating runaways from British and French territories would be offered protection if they could show a “legitimate” claim to freedom.[13] The following year, absentee planters and London merchants complained that the loss of British-owned slaves to Trinidad had been “very considerable.”[14] Settlers on the island of Grenada had even begun deploying “regular night guards on the sea side” to prevent what their London allies referred to as “a ruinous emigration of their slaves.”[15]

Transformations in the Southeastern Caribbean

At the time of these events, planters had already begun to expand plantation agriculture and slavery in Spanish Trinidad. But moving back to the 1770s, the island was a different place. Described as a “fruitful well watered extensive island” by Leybourne, it was not yet a place where plantation agriculture dominated the local economy.[16] At Leybourne’s time of writing, the island was one of a decreasing number of Caribbean islands where colonial society had yet to be fully organized around slave-cultivated sugar, cotton, cacao, coffee, and timber for export. Leybourne, much like his contemporaries throughout Britain and the Americas, had come to understand this form of racialized commodity production as “natural” to the Caribbean by the 1770s.[17] And so in many ways, Trinidad existed as something of an anomaly – something unnatural – to high officials like Leybourne.

Half a century later, no observer could have truthfully described Trinidad, after 1797 under British rule, in quite the same way. Nestled in the African American History Collection at the Clements Library, a short but remarkable document – a neatly folded overseer’s report from the Brechin Castle plantation dated to 1827 – illustrates some of the transformations which had transpired in Trinidad since the 1770s. In the late summer of 1827, preparations had begun for the 1828 sugar harvest on Brechin Castle, a medium-sized plantation in the center-west of the island. The report lays bare the heavy toll of sugar cultivation on the health of enslaved people. In August 1827, Brechin Castle’s overseer Mr. Philan wrote in his monthly report that the “cultivation of canes looks well.” But the prospect of a good crop came with costs for the health of those forced to labor on the plantation. Of fifty-five enslaved laborers on the estate, fourteen people had spent time in Brechin Castle’s hospital that month – some eleven men and three women. “Clarissa has had the dysentary [sic] but is now well” wrote Philan. “Teddy,” an elderly man, had been “since June last in the hospital.” The other captive workers “who were in the hospital were sores and slight fevers” he wrote.[18] 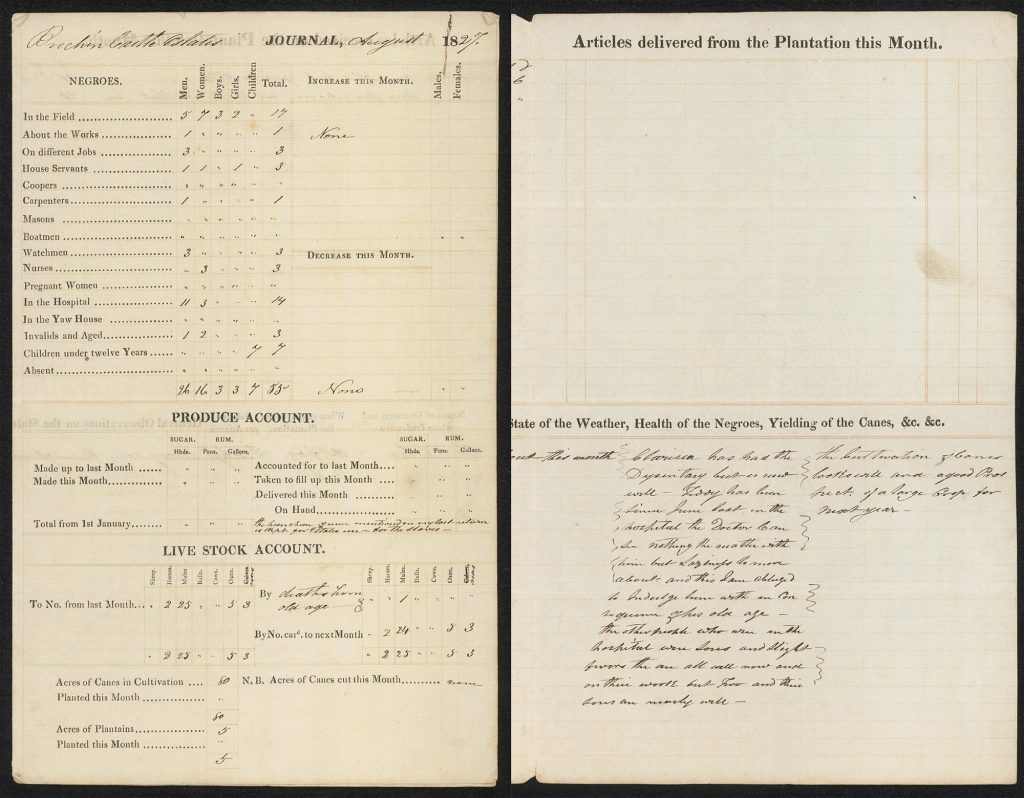 I came to the William L. Clements Library as a Jacob M. Price Fellow in an effort to better understand the transformations that shaped the southeastern Caribbean from the late 18th through early 19th century. The Caribbean-related manuscripts held at the Clements Library – from the aforementioned Henry Strachey Papers and the African American History Collection, to the George Macartney Papers, Maréchal de Castries Papers and the Alexander Wedderburn Papers – contain rich material pertaining to the transformations that marked the region during the late 18th and early 19th centuries. Read against the grain, such collections offer opportunities to think through the histories of a region – which like the Greater Caribbean more broadly – can only be partially understood when told through the histories of commodity production, imperial control, and expansion. 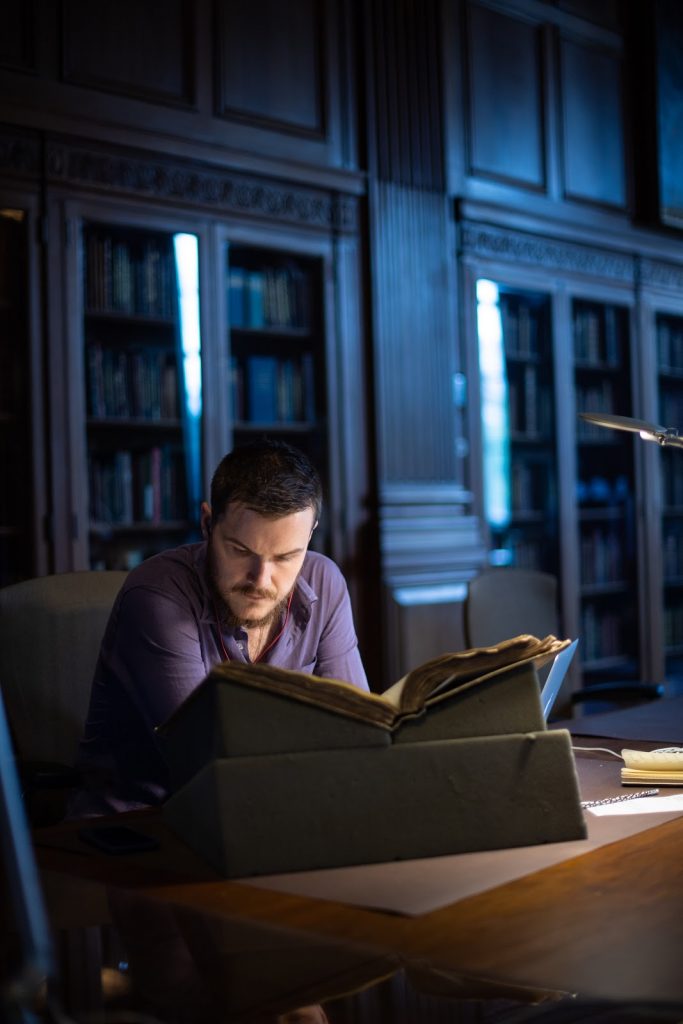 Patrick Barker at work in the Avenir Foundation Reading Room at the Clements Library, August 2019.

[3] Bram Hoonhout and Thomas Mareite, “Freedom at the fringes? Slave flight and empire-building in the early modern Spanish Borderlands of Essequibo-Venezuela and Louisiana-Texas,” Slavery & Abolition, 40:1, 62.

[4] Detail from The West Indies exhibiting the English, French, Spanish, Dutch & Danish settlements with the adjacent parts of North & South America, ca.1810. See also Thomas Jefferys, The Coast of Caracas, Cumana, Paria and the Mouths of Rio Orinoco with the Islands, 1801.

[12] These insights are drawn from my dissertation.

[14] Minutes of the West India Planters and Merchants, quoted in Scott, The Common Wind, 63.

[15] Minutes of the West India Planters and Merchants, quoted in Scott, The Common Wind, 126.

[17] On such commodities as the “natural” produce of the island of Grenada, see Ibid, 189.