Home » About » Blog » Virtual discussion: histories of race, gender, and the practice of citizenship

Virtual discussion: histories of race, gender, and the practice of citizenship

What makes someone a citizen of the United States? The Fourteenth Amendment appears to provide a clear answer: “All persons born or naturalized in the United States, and subject to the jurisdiction thereof, are citizens of the United States and the State wherein they reside.” But until the ratification of the Fourteenth Amendment in 1868, the Constitution said very little about citizenship, aside from Article 1, Section 8, Clause 4, which reserves to Congress the right to establish a “Rule of Naturalization.” Until Reconstruction, most Americans would have thought of themselves first as a citizen of a particular state. The legal status of “United States citizen” only had currency when Americans were overseas, particularly when they were subject to action by other nations—being impressed into the British Navy, or captured by Barbary pirates. Between 1789 and 1868, the clearest government guidance on who was or was not a citizen came from the Supreme Court in the Dred Scott decision in 1857, which held that an African American born in the United States could not be a citizen.

Beyond the legal category of “citizen,” however, Americans have long embraced two different models of citizenship, one based in rights, the other in responsibilities. Under the first model, citizenship consists in exercising the rights that citizens are guaranteed—the right to vote, to associate with like-minded people, to engage in political speech, to be part of a faith community. Under the model of citizenship based in responsibilities, citizens are people who fulfill a certain set of expectations: serving on juries, paying taxes, serving in the military, etc. Both models are rooted in the idea that citizenship consists in a set of practices rather than in a specific legal status. The idea that being a citizen in a democracy is based more in what you do than in who you are is one that is deeply rooted in the histories of people who over time were denied full civic participation. This denial was often most visible in debates over who was or was not given the right to vote, but voting is only one of the practices that helped define someone as a citizen. Our current understanding of citizenship has been shaped by almost two centuries of advocacy by African Americans, women, Native Americans, and others who argued that they deserved full recognition as citizens of the United States because they acted like citizens of the United States.

On Monday, October 19, the William L. Clements Library, in partnership with the American Academy of Arts & Sciences, will host a program featuring two leading scholars who will uncover different aspects of these histories, and will connect them to current political discussions. The program, titled “Race, Gender, and Rights: Histories of the Practice of Democratic Citizenship,” will offer a conversation between Derrick Spires, associate professor of English and American Studies at Cornell University and author of The Practice of Citizenship: Black Politics and Print Culture in the Early United States (Penn, 2019) and Martha Jones, Society of Black Alumni Professor and Professor of History at Johns Hopkins University and author of Birthright Citizens: A History of Race and Rights in Antebellum America (Cambridge, 2018) and Vanguard: How Black Women Broke Barriers, Won the Vote, and Insisted on Equality for All (Basic, 2020). This program is part of the university’s set of activities organized for its theme semester on “Democracy & Debate.”

Professors Jones and Spires display in their work the centrality of activism and advocacy to defining what it actually meant to be a citizen of the United States. Both Birthright Citizens and The Practice of Citizenship focus on the activity of African Americans who in the antebellum decades worked through advocacy, activism, and civic engagement to build a case that they deserved full recognition as citizens of the United States. Through everyday practice—that is, by behaving like citizens—African Americans worked to build norms that helped prove they deserved civic recognition. Spires’ work focuses primarily on the realm of print culture, examining how “black writers [and editors] themselves conceptualized and transformed the meaning of citizenship in the early republic” through political writing in newspapers, magazines, pamphlets, and other forms that were intended specifically for a Black audience (Spires, 2). In Birthright Citizens, Jones focuses primarily on legal history, specifically in Baltimore, showing how instead of waiting for legal citizenship status to be conferred upon them, Black people went about their lives as though they were already full-fledged citizens. They made contracts, filed lawsuits, built their own churches, and owned guns, even though those rights remained tenuous in the face of white dominance. Vanguard takes a longer chronological view of the work by Black women to claim civic recognition in ways that expanded beyond voting rights, through speaking in public, using public transportation, and playing leadership roles in churches and other civic organizations. 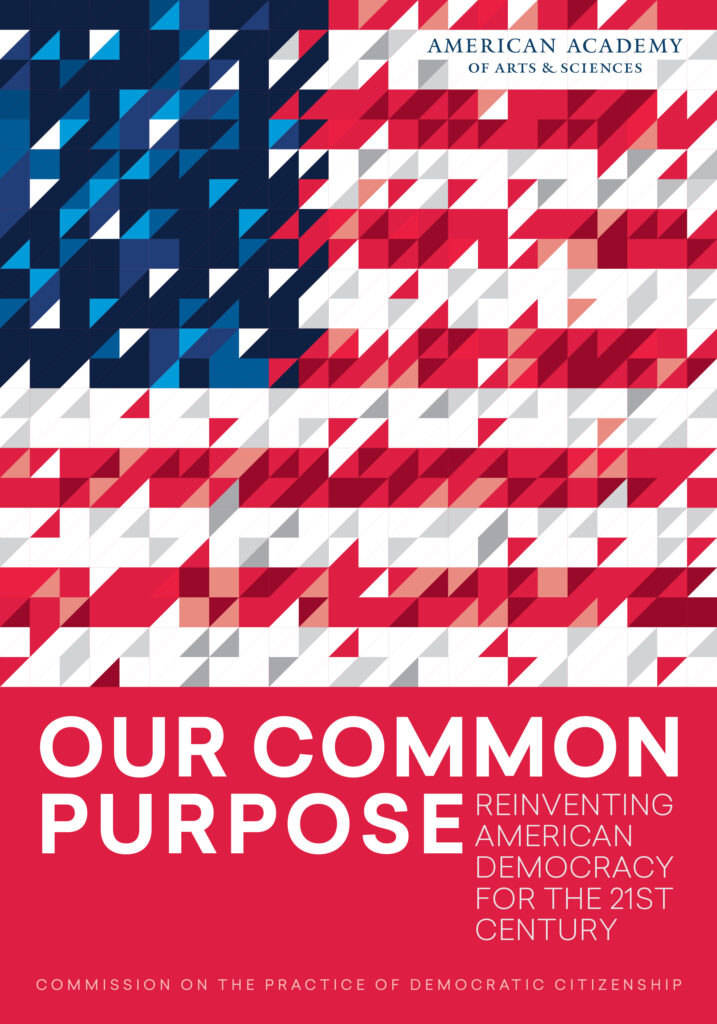 As is clear from recent political debates in this country, these questions are not simply of historical interest. Questions persist of who is acknowledged as a citizen, who is allowed to vote, and what forms of civic participation and protest are tolerated. Jones’ and Spires’ scholarship has direct connections to a recent project sponsored by the American Academy of Arts & Sciences, the Commission on the Practice of Democratic Citizenship. The commission’s final report, titled “Our Common Purpose,” focuses on ways that individual and collective forms of civic participation are part of a virtuous cycle that is necessary to reform our democratic institutions for the 21st century. As surveys have shown for years, most Americans feel that their institutions of government do not actually serve their interest, which diminishes trust in institutions, which in turn diminishes civic engagement. The Academy’s report offers a range of recommendations for how we can promote practices of civic engagement on the part of everyday people in the United States, and how our government can better serve the people that it represents. Many of these modes of civic engagement hearken back to the models of advocacy and activism engaged in by African Americans in the 19th century in their work to practice citizenship even before they possessed formal legal status as citizens. Ben Vinson, Provost of Case Western Reserve University and a member of the Commission, will moderate the conversation. I hope that you will join us for what promises to be a thought-provoking evening.

Register for the virtual panel discussion “Race, Gender, and Rights: Histories of the Practice of Democratic Citizenship,” on October 19, 2020.