As a student pursuing the Graduate Certification in Archival Administration at Wayne State University, Detroit, Michigan, I completed a 135-hour practicum applying my classroom learning to work in the field. For my project, I had the pleasure of processing two 19th century whaling logbooks recently acquired by the William L. Clements Library in Ann Arbor.

The whale is a majestic figure in the human psyche. Long before Herman Melville wrote of Captain Ahab’s foe, indigenous cultures in Greenland, Canada, and Japan hunted and harvested whales for food, clothing, and fuel. Most whaling enterprises gradually shifted from subsistence to commercial, as demand grew for whale products in American and European markets. Whale oil fueled lamps, lubricated machinery, and extended the scent of perfumes, while whalebone gave rigid but light structure to corsets and umbrellas.

Commercial whaling expeditions typically lasted from six months to three years. The most crucial factors to the length of the journey were the endurance of the crew and the cargo capacity of the vessel. In order to turn a profit, ships had to stay out as long as they still had room for product onboard.

One of the chief documents produced by whaling expeditions was the logbook. Whaling logbooks were kept in an official capacity, typically by the first mate on the vessel. They recorded daily entries with information on the ship location, wind speed and direction, crew activities, and whales seen, captured, or harvested. In between the lines of observations on the weather and the process of whaling, the narrative journal entries provide valuable context for the human perspective.

In addition to the historical and narrative value of whaling logbooks, researchers now mine these volumes for data pertinent to climate science. Daily accounts of weather patterns, wind and ocean current direction, temperature and ocean depths provide a wealth of information about 18th and 19th century oceanic life and its environments.

While the Clements Library has always held rich maritime collections, it lacked significant examples of documentation produced aboard whaling vessels. The recent acquisition of these two whaling logbooks in particular adds to the collection unique perspectives on commercial whaling in the mid-19th century and the communities the endeavor supported.

Marie “Alida” Taber, wife of whaling Captain George Taber, kept these daily records during two whaling voyages: a several month journey from Hawaii to Connecticut and a longer voyage from Rhode Island to the island of Rodrigues in the Indian Ocean. The volume also contains personal journal entries kept by Marie Taber on the U.S. east coast while her husband served aboard the Barque William Wilson from October 1857 to 1859. 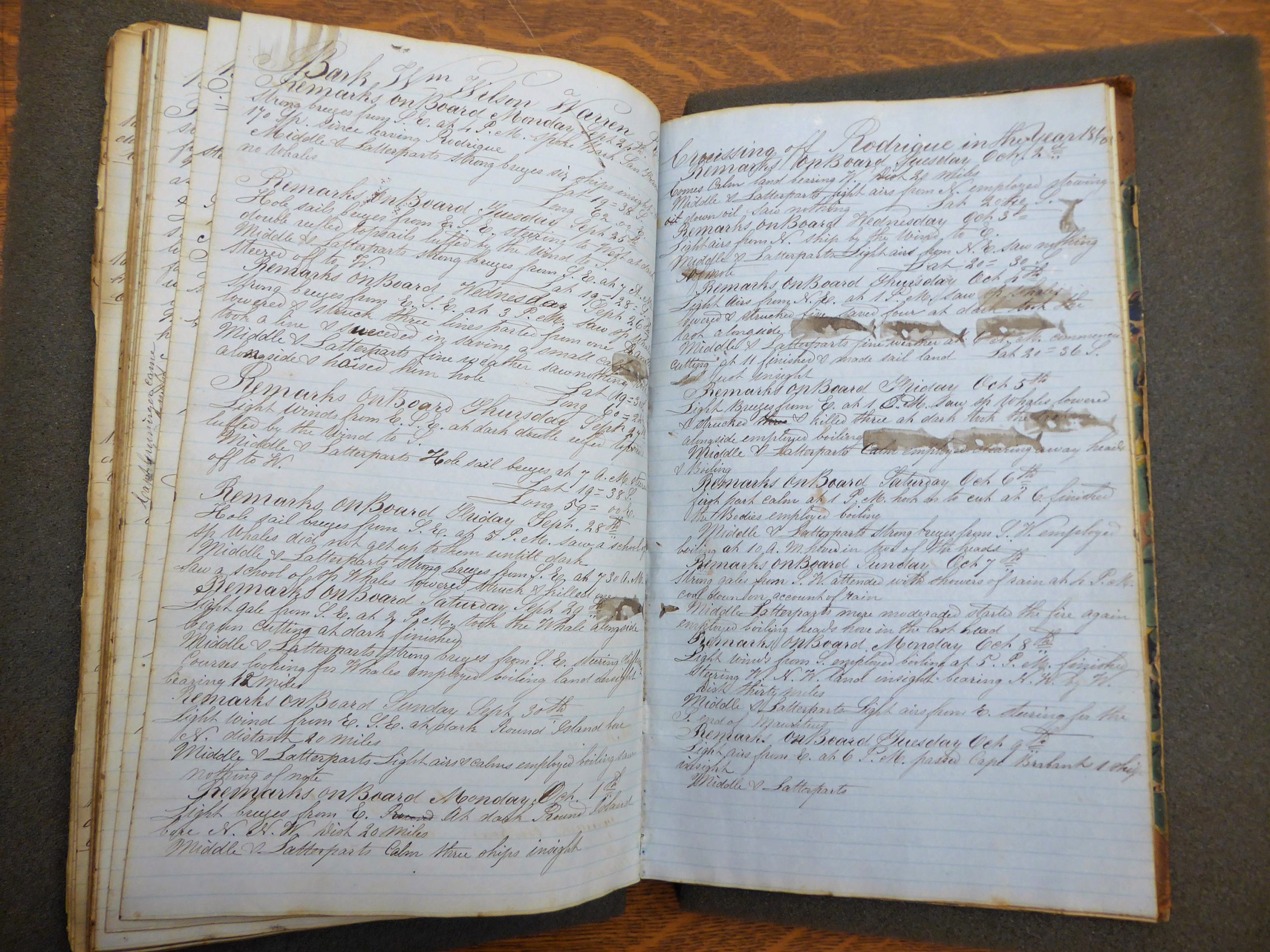 Marie was born as R. Alida Lehongre around 1830, to French parents on the island of Mauritius in the Indian Ocean. She met Captain George Taber of Acushnet, Massachusetts, and the two married in 1850. Marie acted as log keeper during Captain Taber’s expedition aboard the Brig Magdalene from January to July 1853 as the ship went south from Honolulu, through the Pacific Cook Islands, around the southern tip of South America before making final port in New London, Connecticut. She later kept the voyage log on the Barque William Wilson from May 1860 to January 1861.

While the presence of captain’s wives aboard whaling vessels was not unheard of, it was uncommon to have ships’ logs written by noncrew members. This manuscript is particularly interesting because of its hybrid content and formats. The log contains accounts of multiple whaling voyages as well as a personal journal documenting Marie’s life in Acushnet (near New Bedford), Massachusetts, while her husband was away. Her journal entries provide an intimate look into the loneliness and isolation of being far away from her Mauritius home and disconnected from her husband, friends, and family. 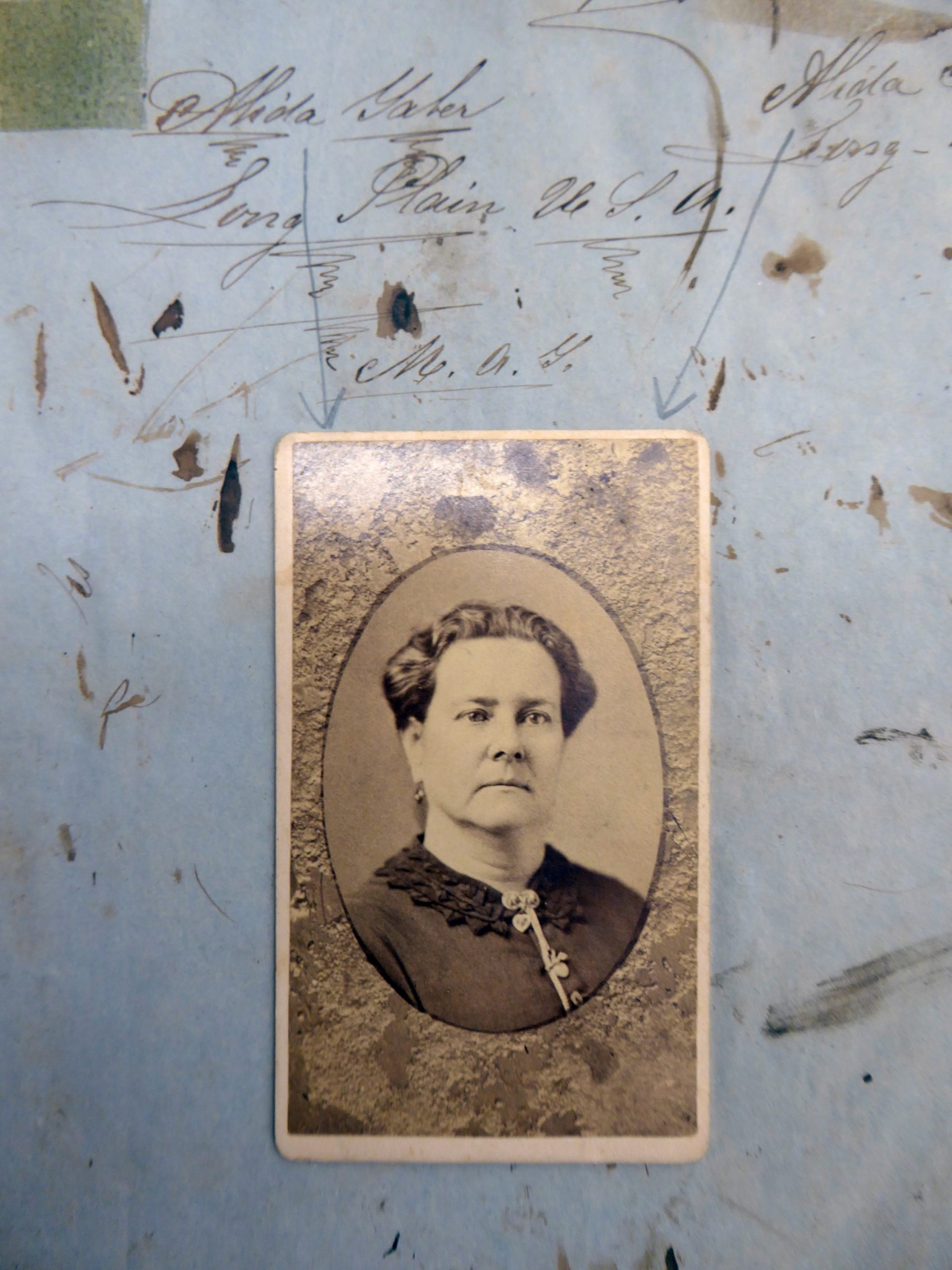 The Clements Library also recently acquired a volume of extracted log entries from the Barque Autumn. This abstract log documents a whaling voyage from Stonington, Connecticut, to the Indian Ocean and South Pacific between 1845 and 1849. Captain Edwin Augustus Perry commanded the vessel. Abstract logs are portions of the full log recorded into a separate volume, in this case to provide a condensed linear narrative of all instances of the crew’s encounters with whales.

Perhaps most remarkable in this volume are 48 pencil drawings depicting whales seen and captured. From the small details of whales’ individual teeth to the chaotic scene of a whaleboat capsizing under the force of a massive tail, this abstract provides the most eventful portions of the whaling voyage in both the written word and visual sketch. 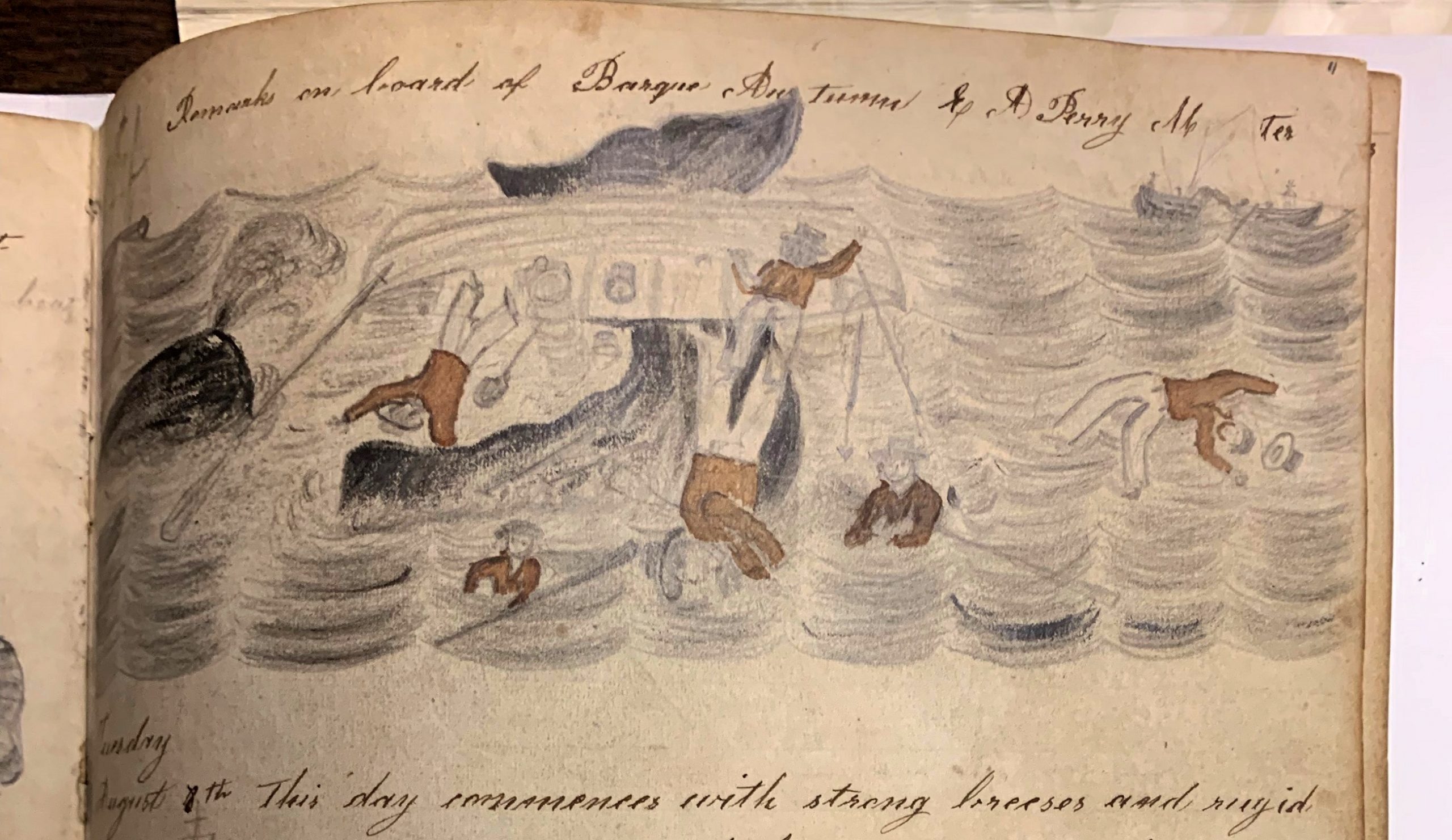 This illustration of interest depicts a whale’s tail slamming down upon a whaleboat, capsizing the vessel and sending six crewmen into the ocean. The crewmembers’ shirts are spot colored in brown ink.

In the course of my project at the Clements Library, I was able to gain experience creating finding aids for manuscript materials and creating files necessary to make the descriptions accessible online. I feel fortunate to have had the opportunity to work with these materials and expand my professional experiences to include special collections. It has been illuminating to see firsthand how the Clements Library works to connect students, scholars, and the public with the richness of American history through their wealth of primary source material.