Where did the authority to abolish slavery reside? In the pre-Civil War era, the dominant view was that state authorities each governed their own territory. The federal government was generally viewed as barred by the Constitution from interfering with slavery. Enslaved people themselves, along with their abolitionist allies, used individual and collective acts of resistance to challenge the power of lawmakers and slaveholders.

This equation changed with the outbreak of civil war in 1861. The power to abolish slavery appeared to reside in many places and “proclamations” against slavery took many forms. Enslaved people took advantage of shifting balances of power between North and South to free themselves, especially when near to Union forces. The Union army was confronted with thousands of fugitive slaves seeking refuge while plantation owners noted the disappearance of their laborers. Union officers responded by crafting field orders that liberated or confiscated Confederate property in persons. Congress released itself from earlier strictures by passing the Confiscation and Militia Acts that selectively freed the enslaved. The President in his role as Commander-in-Chief gradually arrived at the view that his authority also permitted interference with the property interests of slaveholders.  One result was the Emancipation Proclamation. 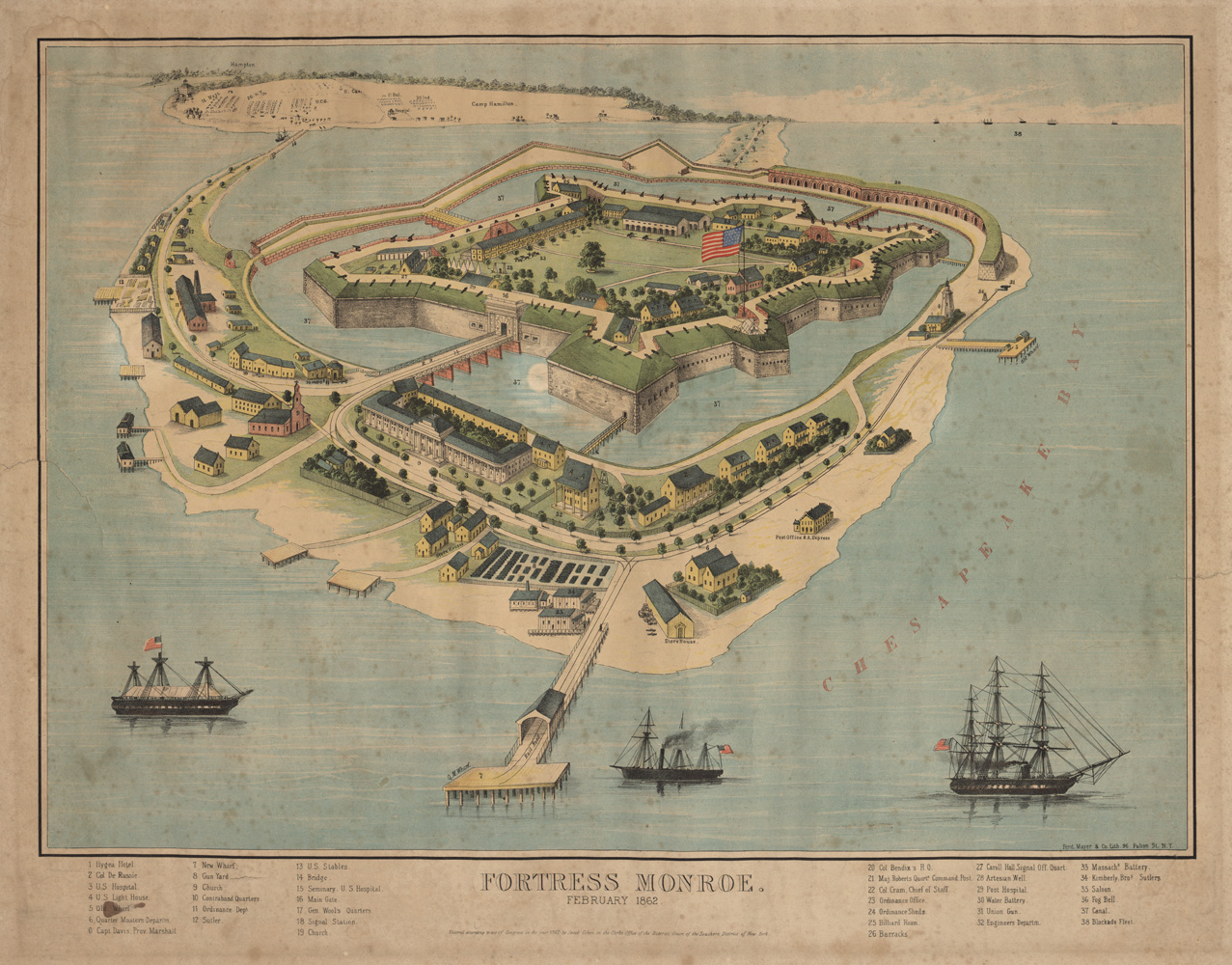 Union generals faced hundreds and then thousands of escaped slaves seeking liberty and safety behind Union lines. In May of 1861 General Benjamin Butler declared slaves to be property or “contraband of war” and hence subject to seizure and protection by the Union. In August 1861, General John Fremont imposed martial law in the state of Missouri and declared all rebel owned slaves to be free. Lincoln, fearing the loss of a loyal border state, rescinded Fremont’s order and relieved the General of his command. General David Hunter had already begun enlisting small numbers of African American soldiers when, in May 1862, he declared free all slaves held in Georgia, South Carolina, and Florida. Lincoln quickly stepped in to rescind Hunter’s order.

Benjamin Butler’s Fortress Monroe was depicted as an orderly, well-outfitted military installation. The inclusion of neatly laid out “contraband” quarters only hints at the human drama created by the thousands of former slaves, whose presence shaped military policy on emancipation. 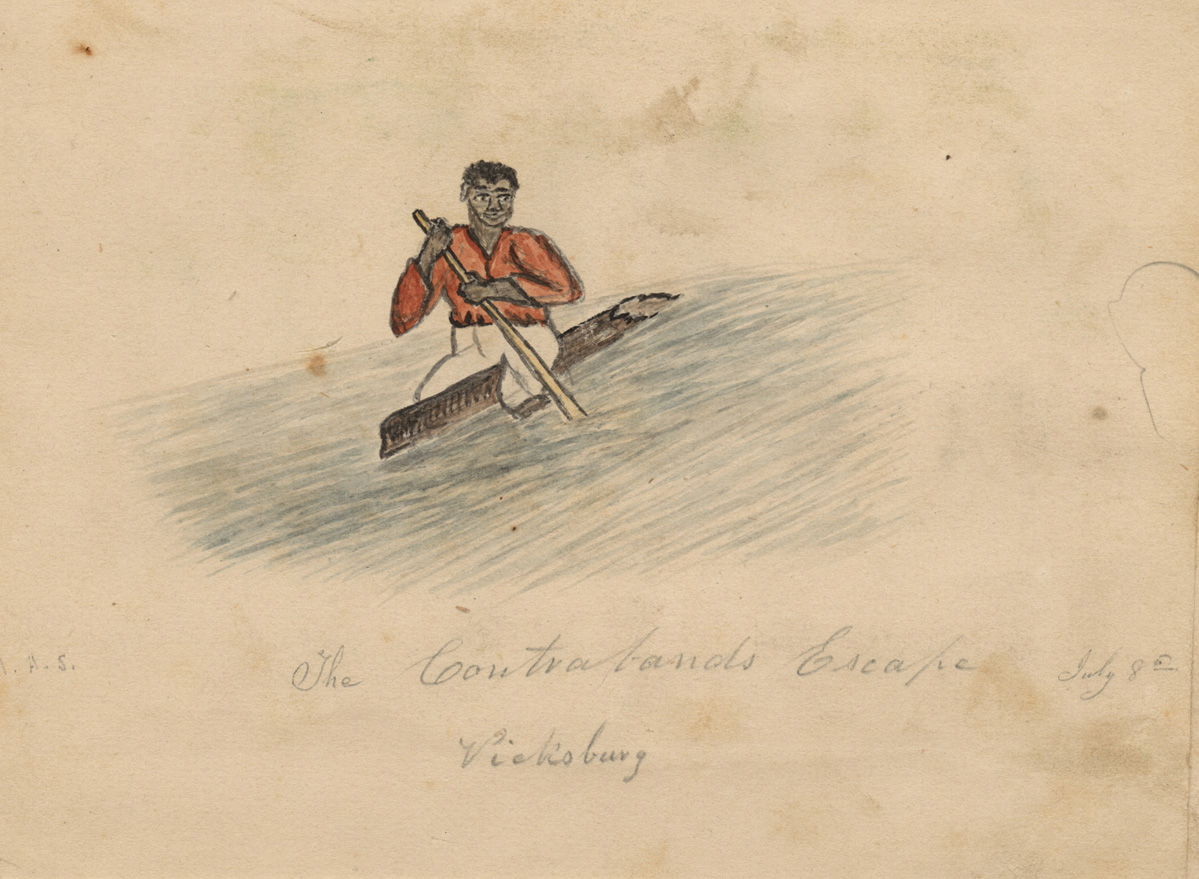 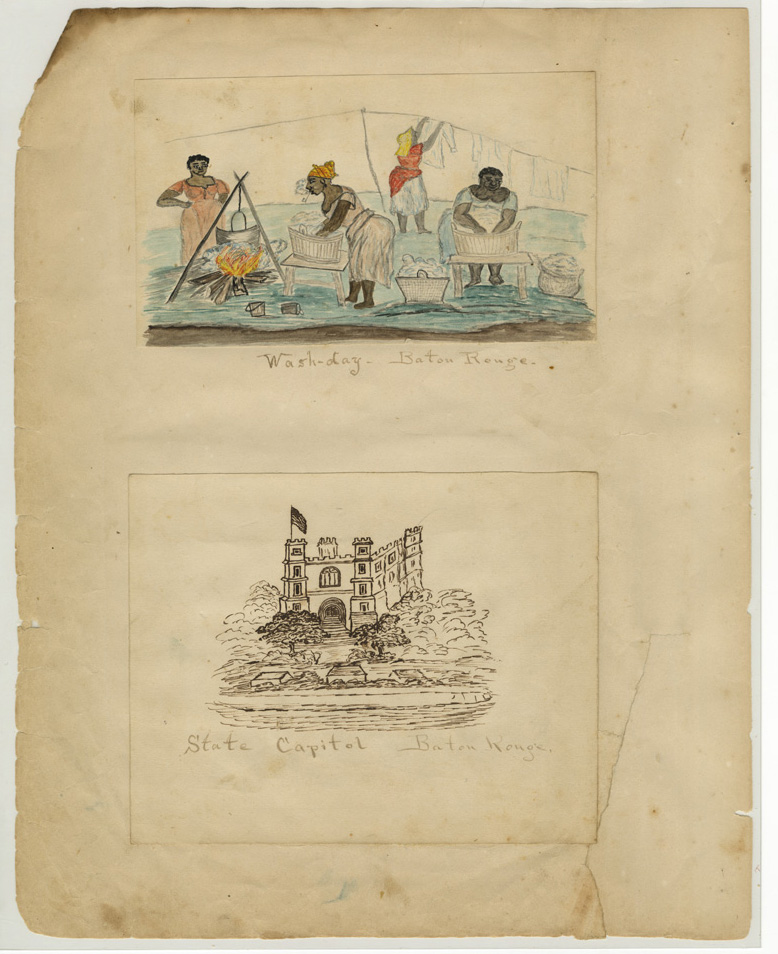 From the perspective of surgeon steward Harry Simmons, we glimpse how some enslaved people freed themselves: through escape and through work. Simmons sailed from New Jersey to Baton Rouge aboard the schooner USS Sophronia. 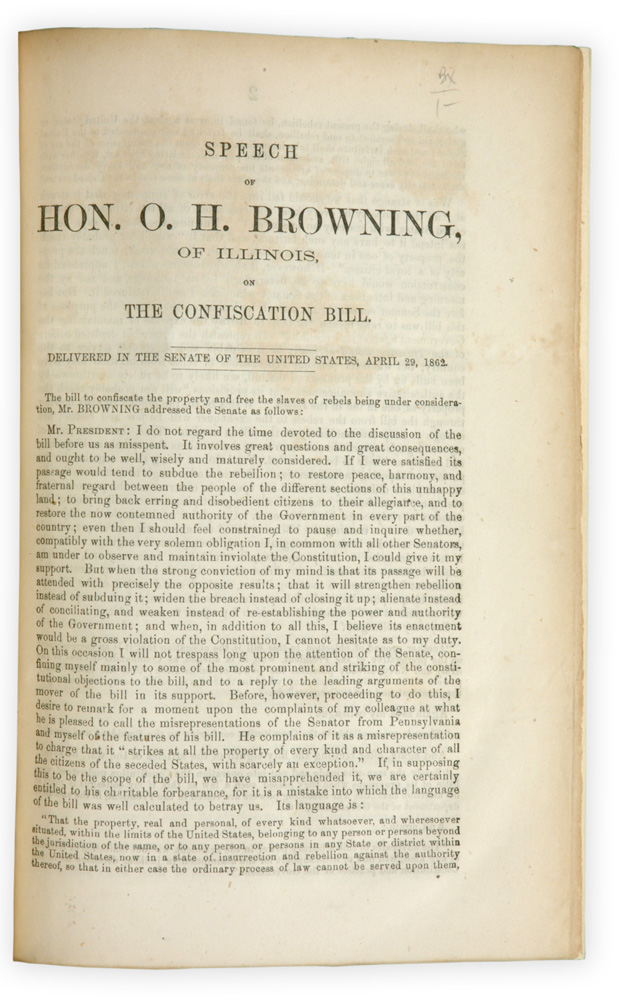 Congress, in August 1861, passed the First Confiscation Act permitting the seizure of property, including slaves, used to support the Confederacy. In July 1862, the Militia Act authorized enlistment of African American men as laborers and soldiers. In a companion piece of legislation, the Second Confiscation Act, lawmakers freed Confederate-owned slaves in areas already occupied by Union forces. 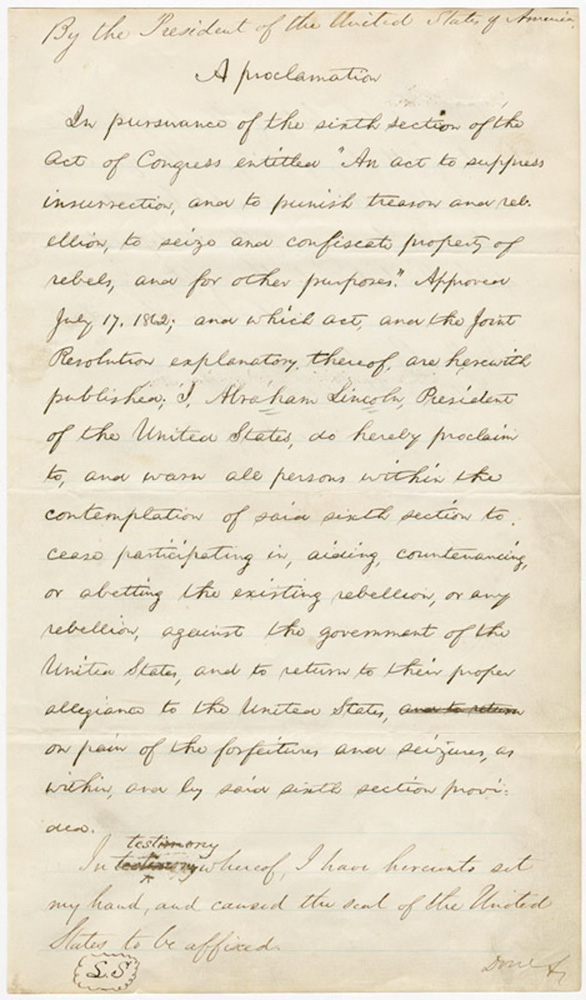 Abraham Lincoln (1809-1865)
“By the President of the United States of America, A Proclamation”
[July 25, 1862]
Manuscript document
The Library Company of Philadelphia

Months before issuing the preliminary Emancipation Proclamation, Lincoln issued an Executive Order that interfered with Southern slaveholding. The President acknowledge section six of Congress’s July 17th Confiscation Act and then again ordered the seizure of rebel property, this time by way of his authority as President. Novelist and journalist Anne Hampton Brewer of New Jersey won Lincoln’s draft order at an 1864 Philadelphia fair. It was later donated to the Library Company of Philadelphia. 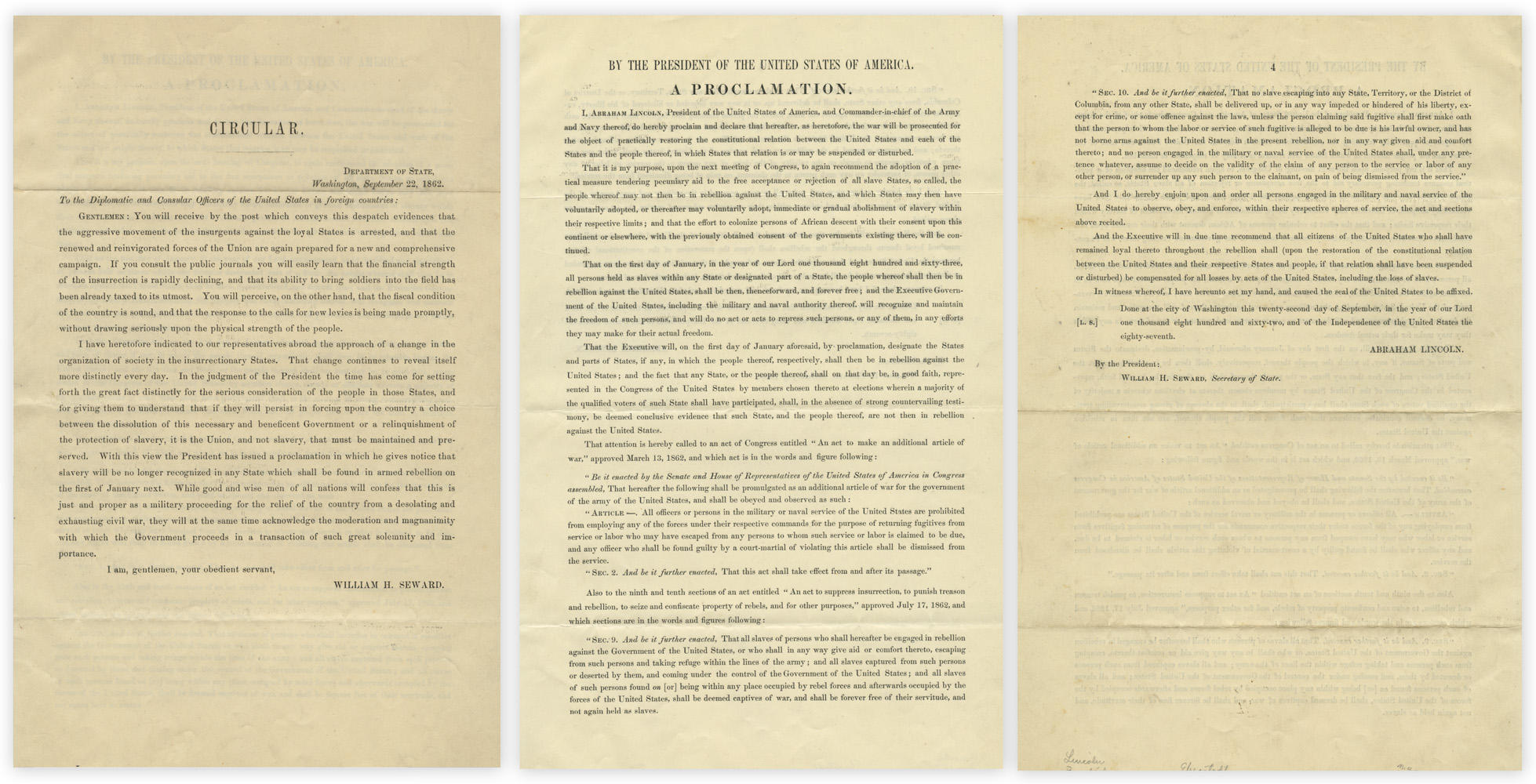 Lincoln’s preliminary Proclamation contained key contingencies. The President gave notice that he might abolish slavery in rebel territory, but offered states still in rebellion a final opportunity to rejoin the Union and continue to hold slaves. The preliminary Proclamation anticipated that slave holders would be compensated for the loss of their property and that newly freed African Americans would be colonized or relocated.