Many Americans understood and remembered the processes set in motion by the Emancipation Proclamation through images that were repeated but also reinterpreted to suggest differing views about the meaning of slavery’s demise. Among the most frequently reproduced illustrations of the era was what was variously titled “A Negro Family Coming into Union Lines” and “An Arrival in Camp—Under the Proclamation of Emancipation.” Set on the periphery of a Union Army camp, this scene captures the modest if not near-destitute circumstances of former slaves as they sought the protection of Union forces. 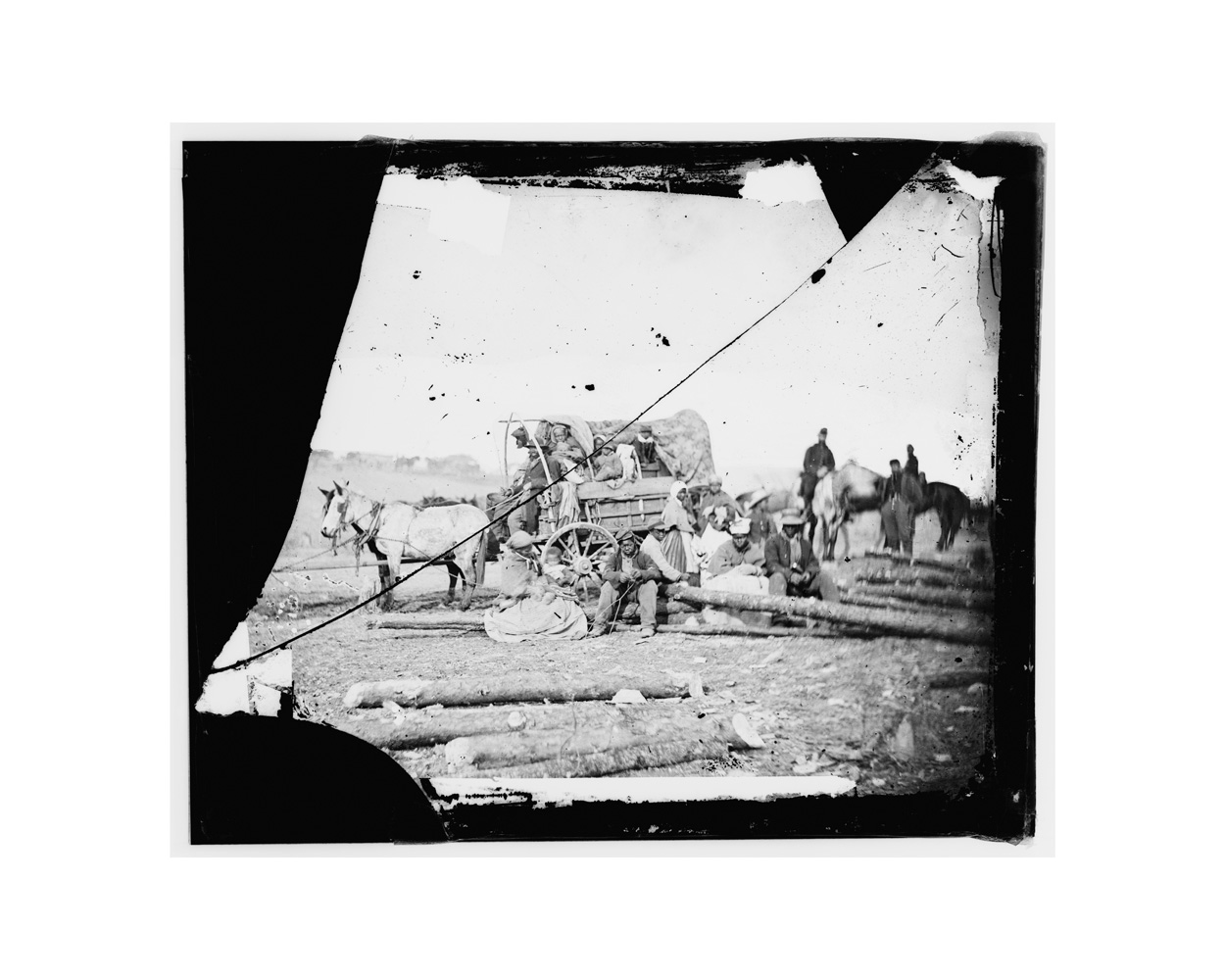 This repeated image originated in a photograph taken by David B. Woodbury, an operator for Matthew Brady. Woodbury shows men, women, and children—presumably former slaves—that arrived together in a horse-drawn wagon. Sketching in the field, newspaper illustrator Alfred Waud borrowed Woodbury’s image, but reconfigured the scene. Waud’s figures were more elegantly attired, including one gentleman with a satin hatband and umbrella. Waud regularly published his work in Harper’s Weekly, and this sketch was published in January 1863. The New York Illustrated News (not shown here) published a version of the same scene that was true neither to Woodbury’s photograph nor Waud’s sketches. Milton Bradley’s Myriopticon toy reproduced this scene yet again, now for entertainment in the family parlor.

What role did African-American soldiers play in the process of emancipation? Each iteration of the image offers a different answer. Photographer Woodbury placed an older black boy at the center of the scene with white soldiers on the periphery. 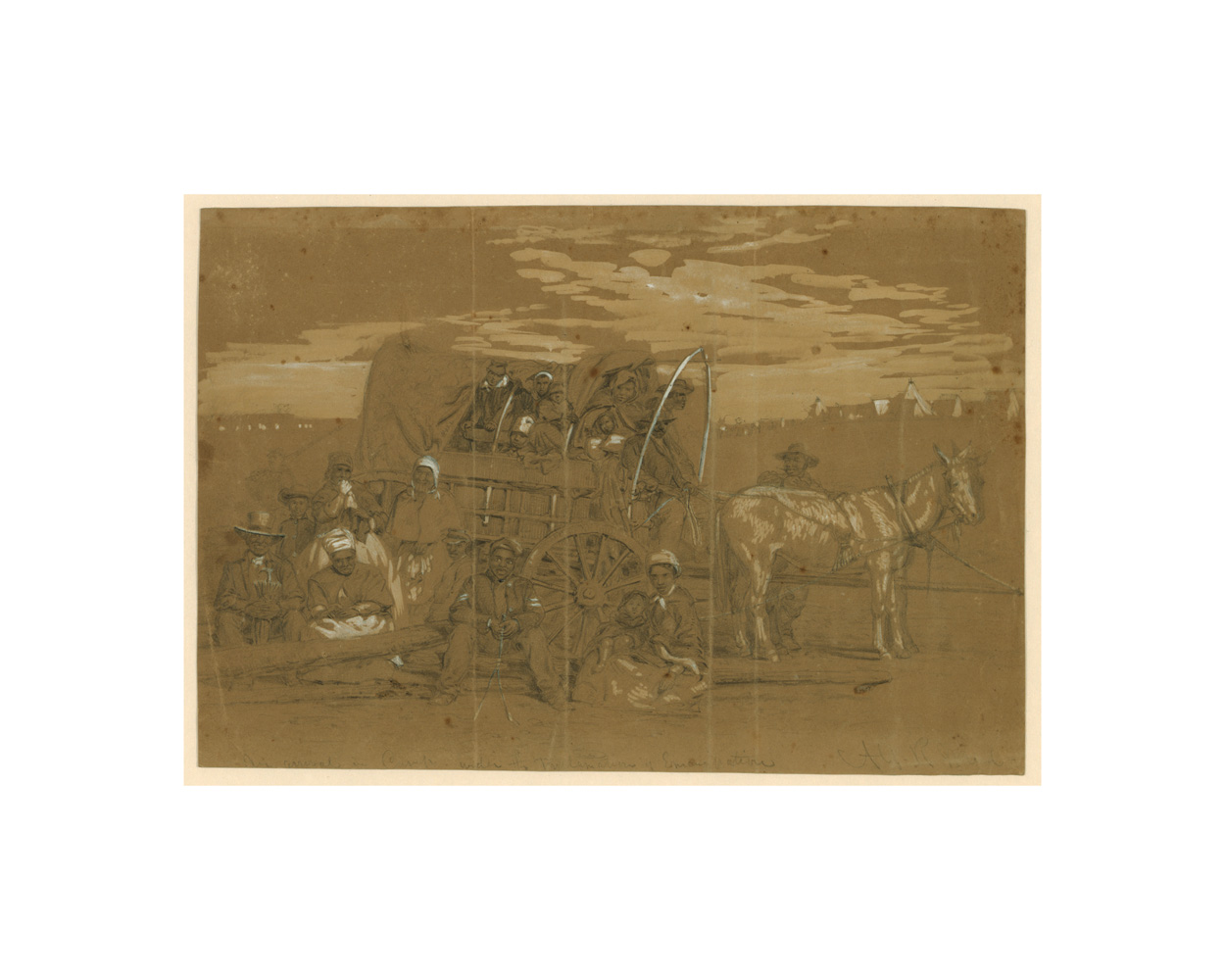 Alfred R. Waud (1828–1891)
“An arrival in Camp under the Proclamation of Emancipation.”
[January 1863]
Drawing, pencil on brown paper with white watercolor highlights
Courtesy of The Library of Congress DRWG/US–Waud,
no. 489 (A size) [P&P]

Illustrator Waud took another view. Initially, he erased Woodbury’s soldiers and changed the central figure to that of an African-American soldier in uniform, holding a sort of dowsing stick. Does the stick in the soldier’s hand suggest his weapon is magic or superstition rather than a rifle? 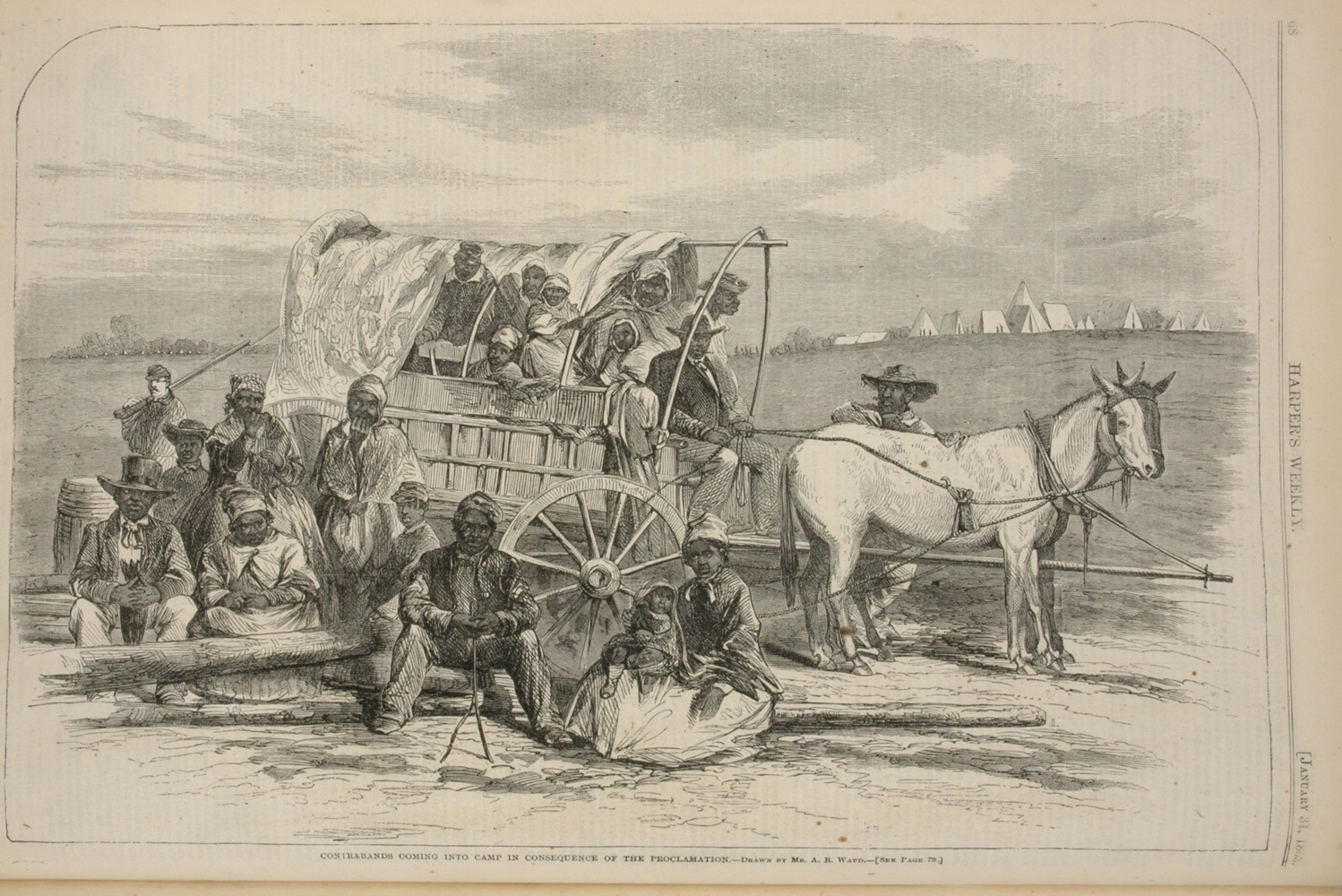 In the published version of Waud’s sketch, a white Union soldier with a rifle prominently resting on his soldier was added back. The New York Illustrated News artist offered yet another view. The group is under the watch of two uniformed soldiers, while the central figure—no longer a boy or a soldier—is depicted as an African-American man and a civilian.

Finally, the Myriopticon scales down this now familiar scene. Blue uniformed soldiers frame the image; we assume they are white men. The central figure has disappeared, but among the small group of former slaves is an elegantly dressed man, a civilian, still holding a simple stick.

The public memory of emancipation was also shaped by public monuments. These larger than life interpretations were expected to influence generations of viewers. The task of capturing a subject so complex as that of emancipation was not simple, and artists throughout the Americas have taken a wide range of approaches. 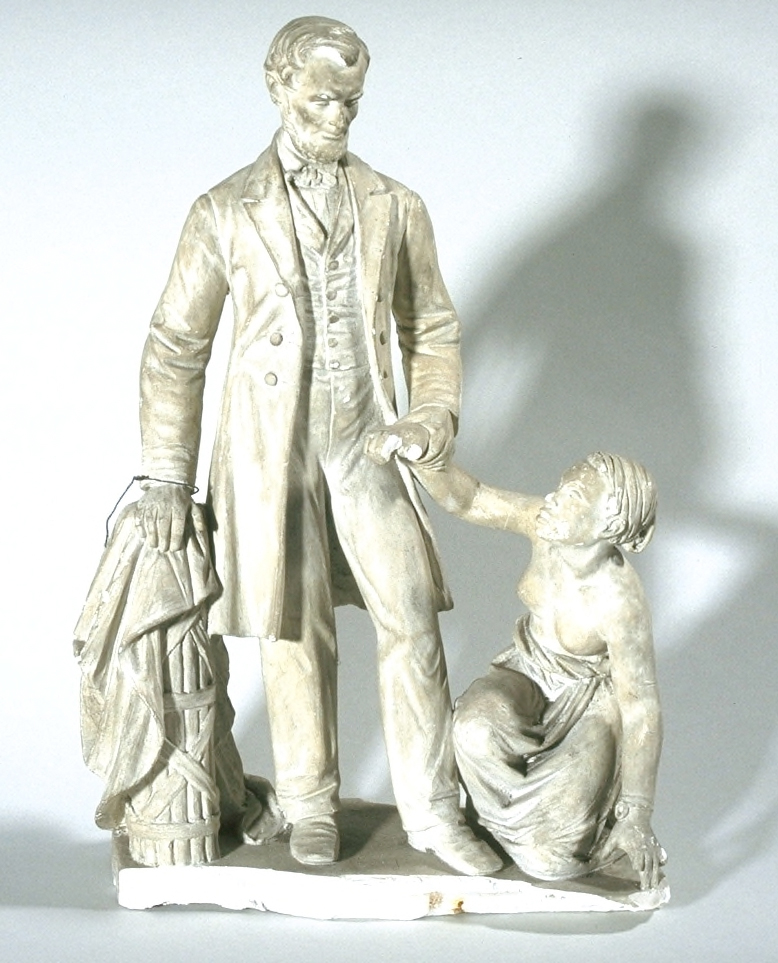 Shortly after President Lincoln’s assassination and the ratification of the Thirteenth Amendment, sculptor Randolph Rogers proposed a monument to Lincoln for the city of Philadelphia. The original design by Rogers survives in the plaster model in the collection of the University of Michigan Museum of Art. Rogers presented emancipation as a product of Lincoln’s benevolence to the slave. The final monument abandoned this approach to honoring the President. 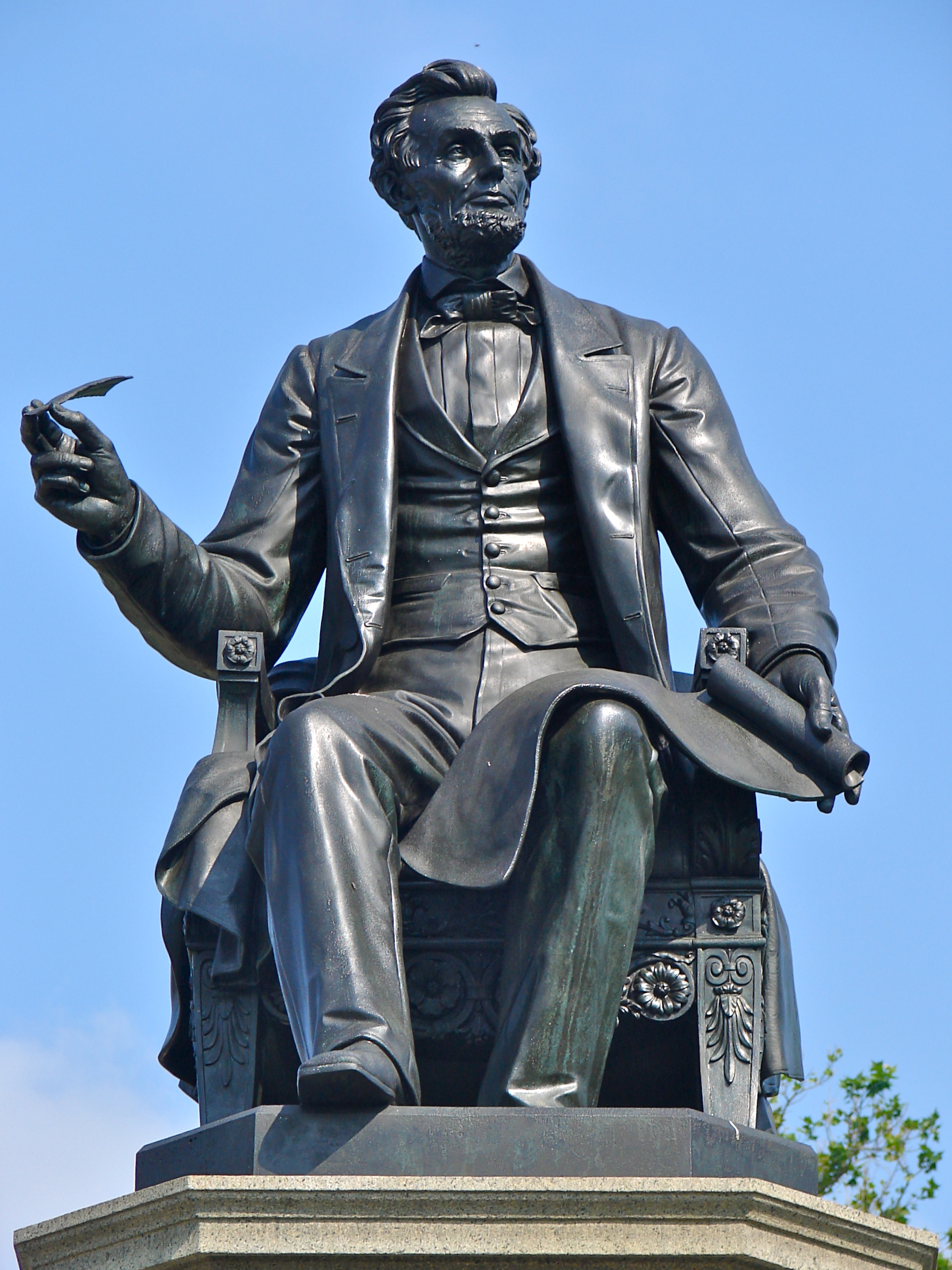 Still standing in Fairmont Park, Rogers’s re-interpretation featured a lone figure, that of Lincoln, holding a quill and parchment in hand.  Emancipation is represented by pen and paper along with a short paraphrase from the Emancipation Proclamation.  The enslaved woman figure is gone. 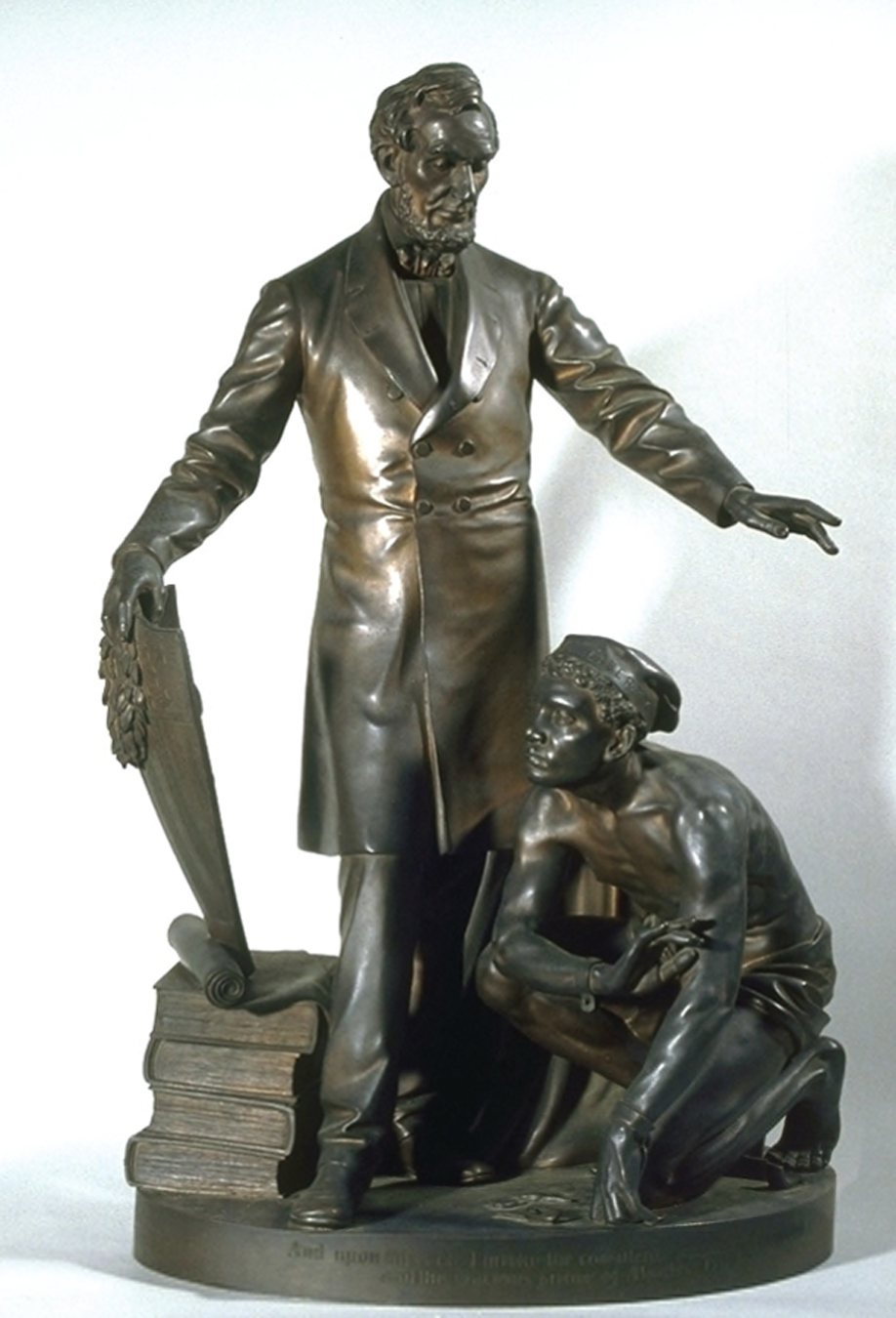 In the 1870s, the St. Louis based Western Sanitary Commission commissioned artist Thomas Ball to commemorate emancipation. Supported by a fundraising campaign primarily among African Americans, the monument’s design became the subject of much negotiation. In Ball’s original proposal, seen here in this maquette, also in the collection of the University of Michigan Museum of Art. 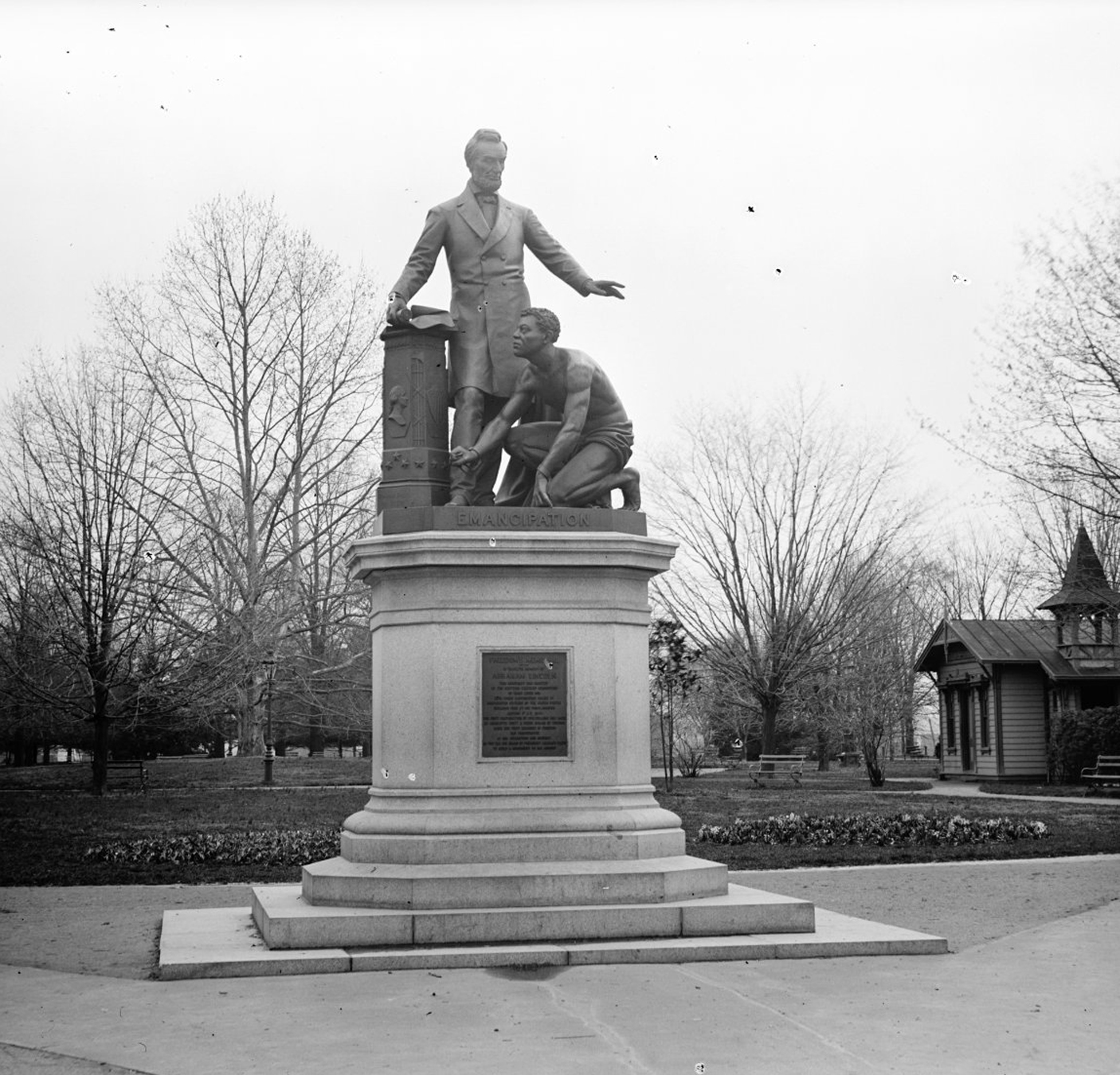 The memorial committee recommended changes that caused the final monument to have a different effect. These changes have led critics to suggest how this monument stands as much as a tribute to the myth of Lincoln as the Great Emancipator as it does to the view of enslaved people as the recipients of benevolence rather than agents of their own destinies. 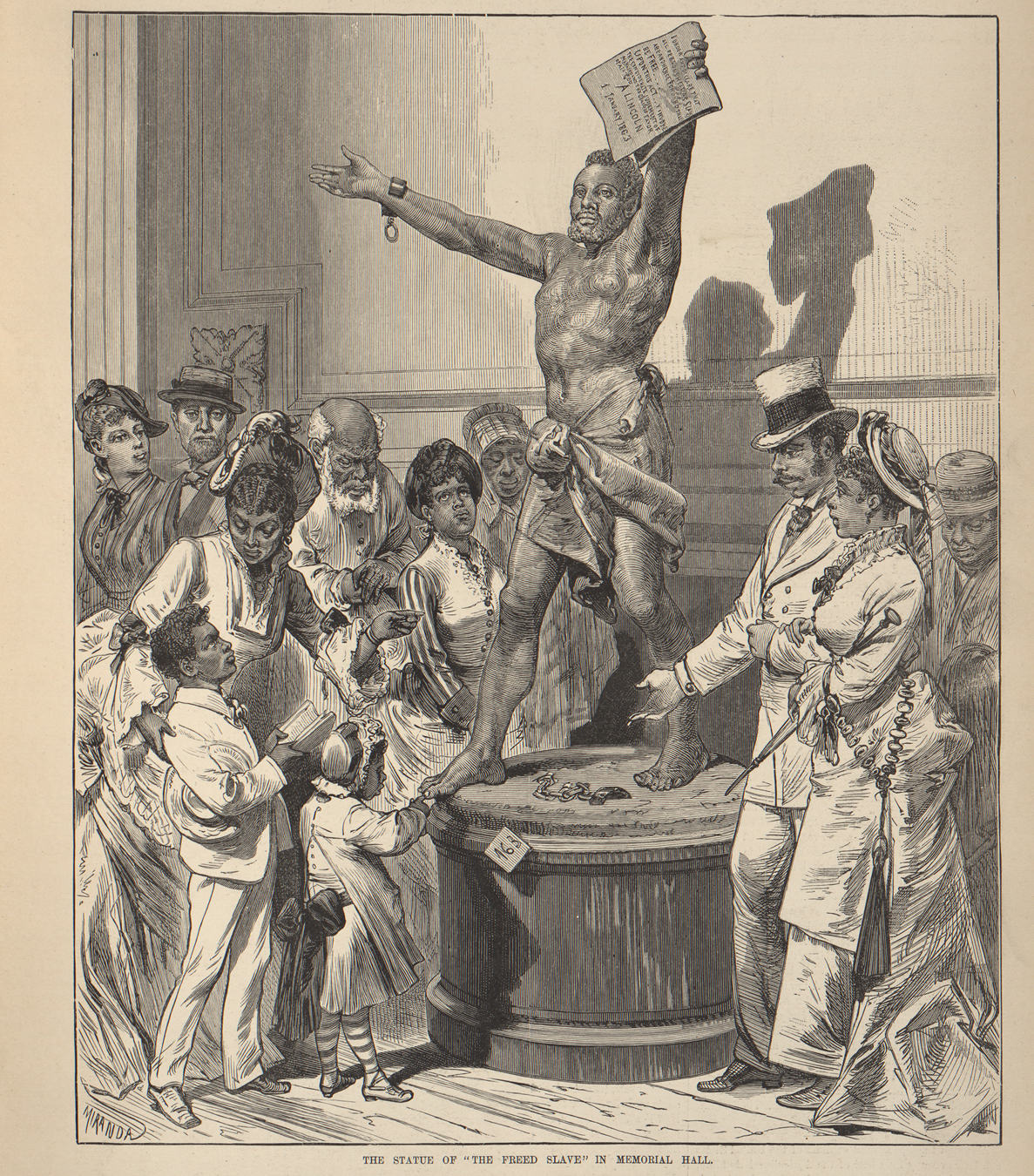 Fernando Miranda
“The statue of ‘The Freed Slave’ in Memorial Hall.”
From: Frank Leslie’s Historical Register of the Centennial Exposition.
Wood engraving
1876

In 1876 at Philadelphia’s Centennial Exposition, Italian artist Francesco Pezzicar’s statue The Freed Slave was first exhibited. This artist’s interpretation of emancipation – a lone man clutching Lincoln’s Proclamation and breaking his chains – stood in dramatic contrast to the memorials of Randolph Rogers and Thomas Ball. The great interest in Pezzicar’s statue on the part of African American visitors was captured in Fernando Miranda’s illustration for Frank Leslie’s Historical Register of the Centennial Exposition. The work received a gold medal. But white commentators were quick to criticize Pezzicar’s work and the artist failed to secure a buyer. The statue returned to Italy and was transferred to the Curatorio del Museo Revoltella at Pezzicar’s death, where it remains on display until this day. 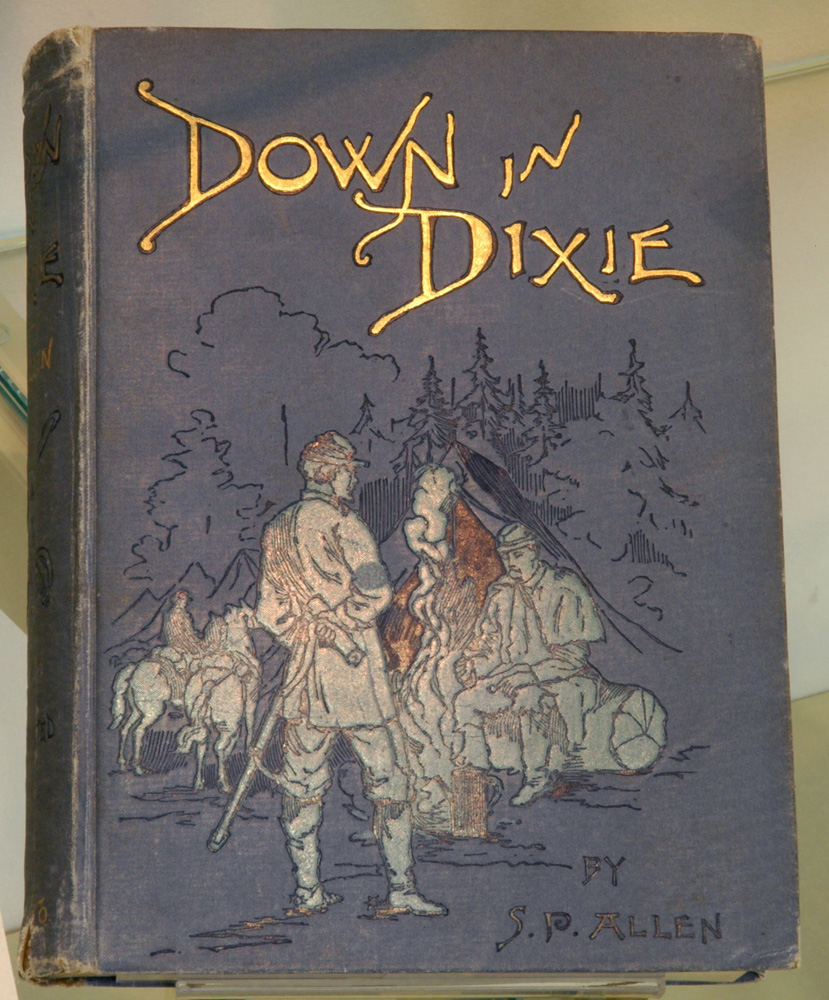 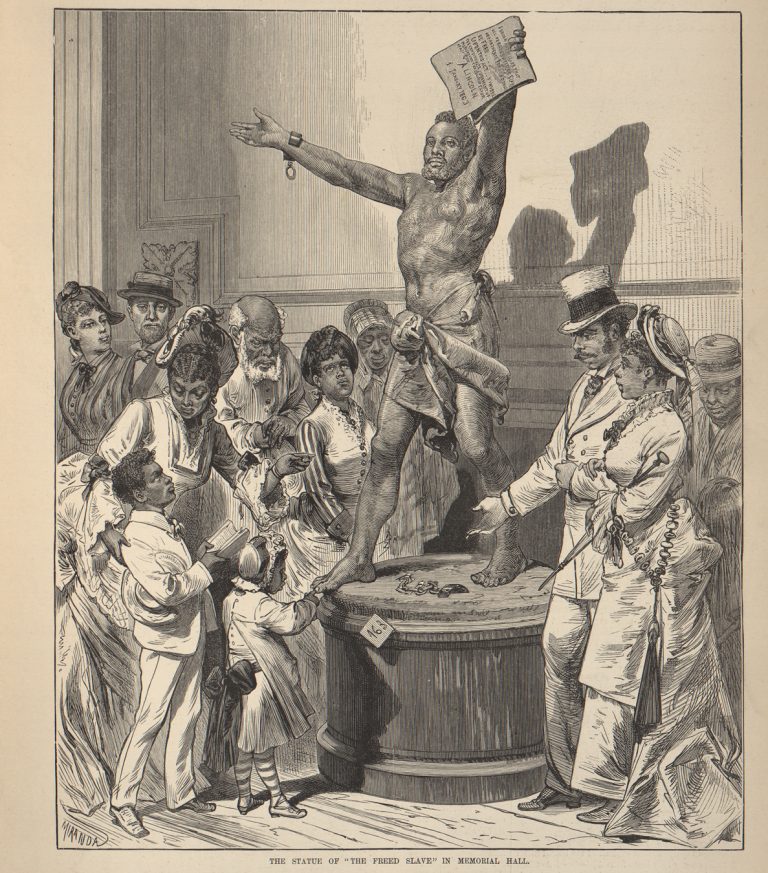