Advances in photographic techniques fueled the wide circulation of images during the era of emancipation. Expensive and constraining daguerreotype studio portraits had dominated the 1850s. By the early 1860s, photography was revolutionized by the albumen print, a versatile and inexpensive process. Photos could now be cheaply produced, replicated, and widely shared. Albumen prints on cartes-de-visite or photographic calling cards depicted famous figures and ordinary citizens. Large albumen photographs captured powerful panoramas and poignant vignettes on battlefields. Stereoscopes brought these images into the intimate spaces of middle-class parlors. Photographs would also shape ideas about the post-slavery world as published sets of photos incorporated signs of slavery’s past into notions of tourism and the picturesque. 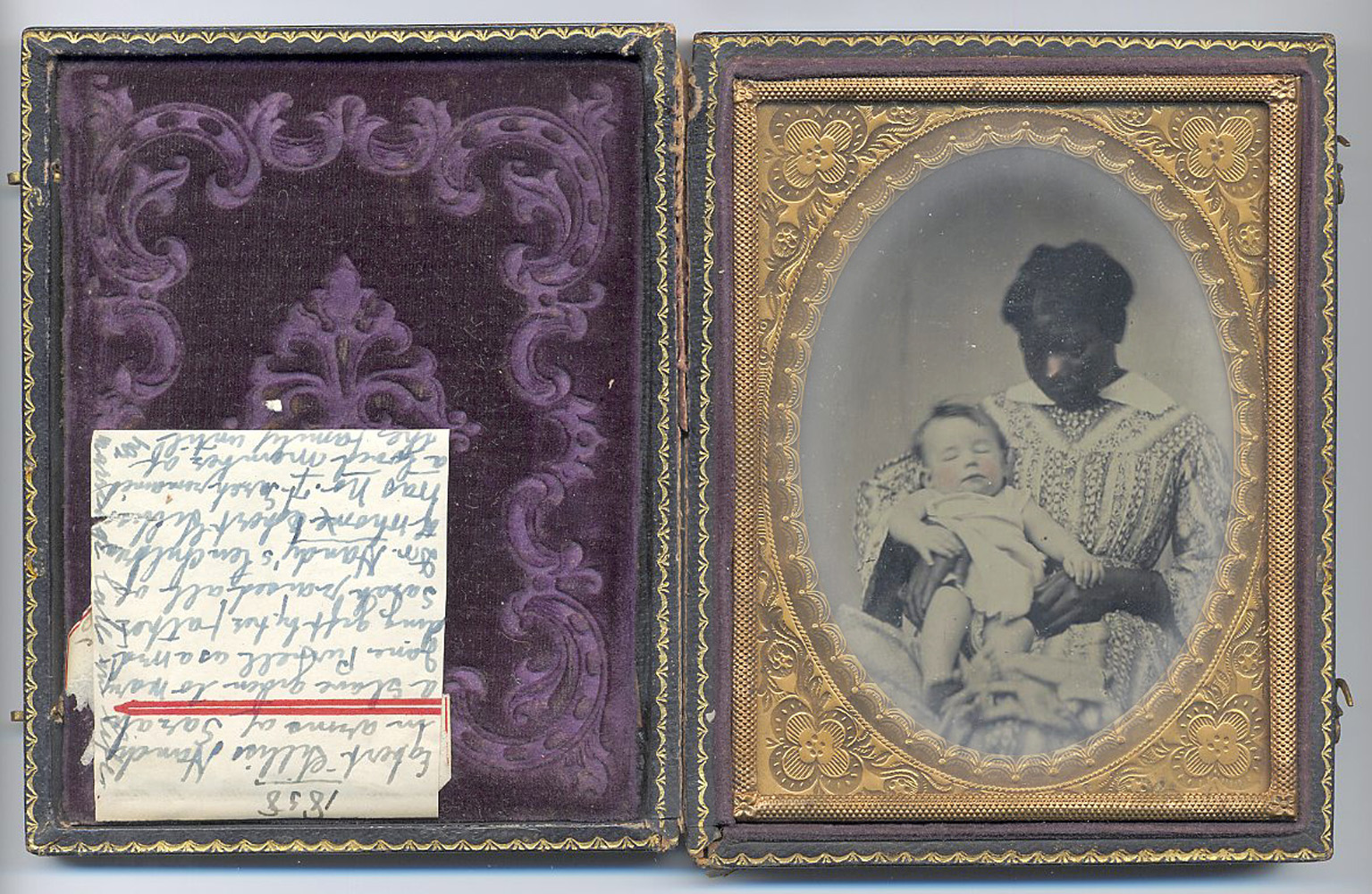 “Egbert Gilliss Handy in the arms of Sarah, a slave given to Mary Jones Purnell as a wedding gift by her father.”
ca. 1859
Handy Family Papers
Photograph, ambrotype

African Americans were at times exploited through early daguerreotypes, as in the case of Harvard University’s Louis Agassiz who used images of enslaved people to develop his theories of scientific racism. More typical were studio portraits of African Americans, both enslaved and free, such as those of Sarah, and Charles and Rose Denard. 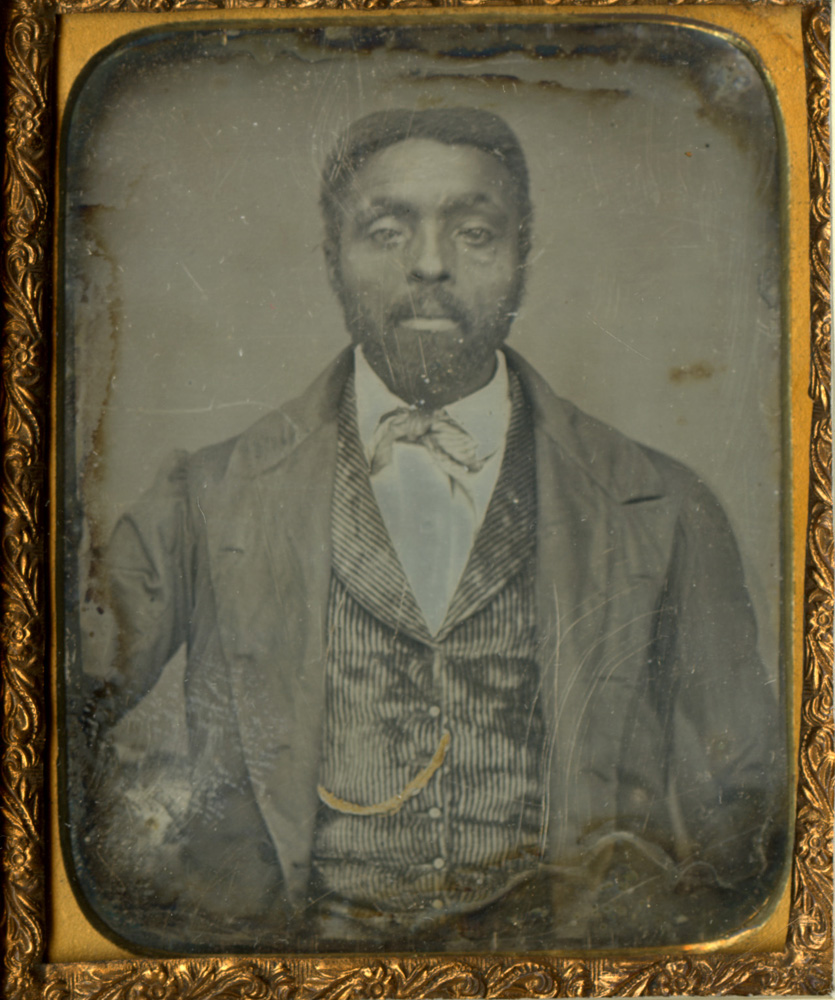 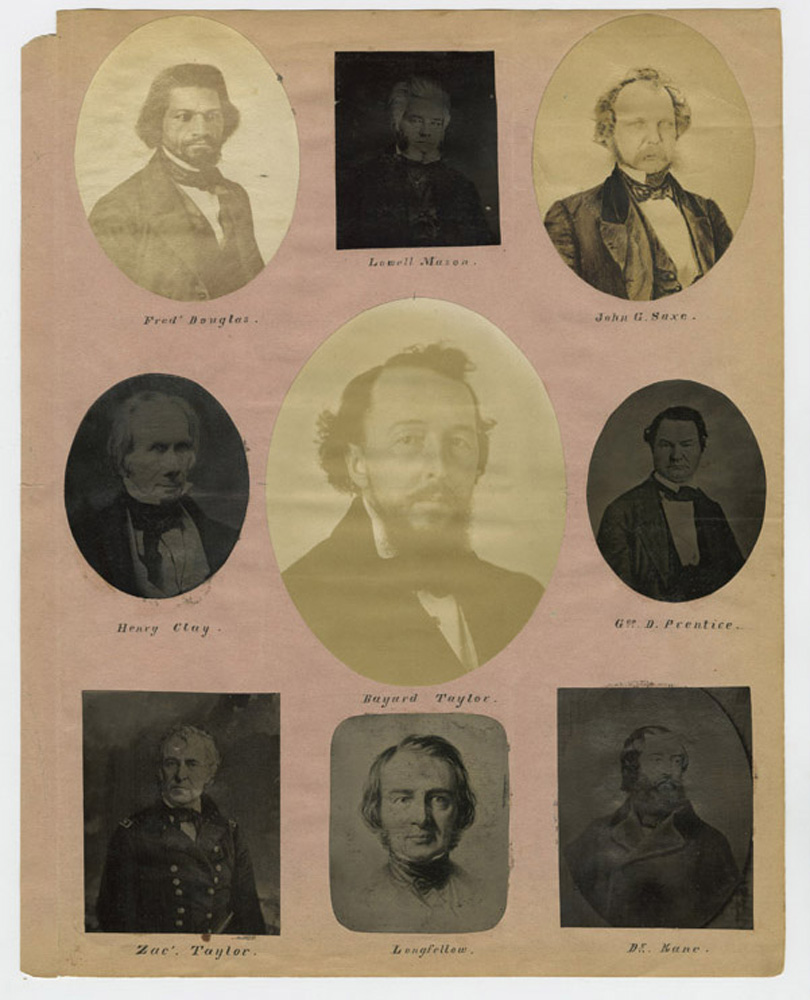 This rare and very early albumen portrait of Frederick Douglass was collected by an unknown scrapbook maker and pasted alongside other notables including poets, journalists, and politicians. 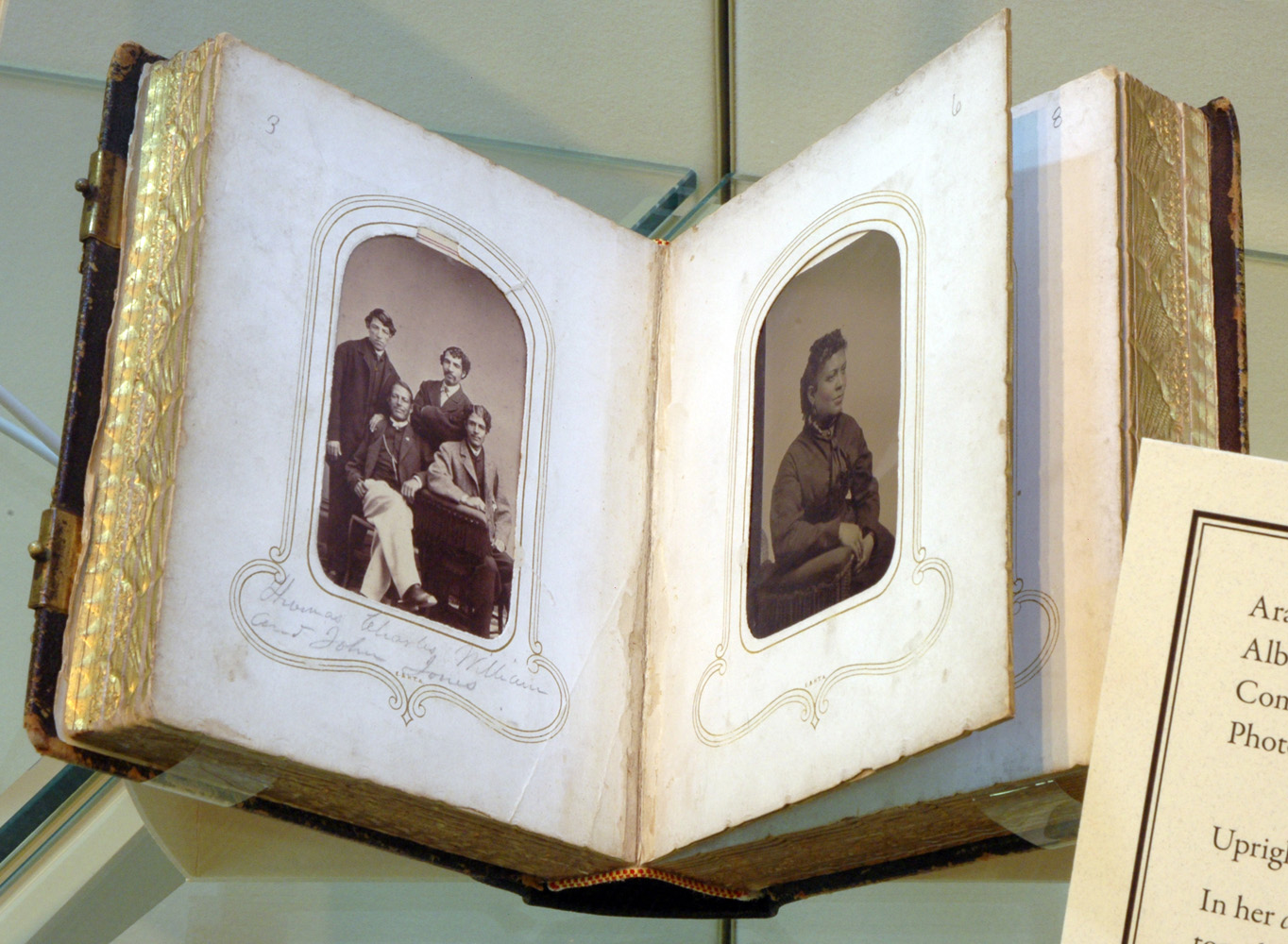 In her carte-de-visite album, young Arabella Chapman brought together Abraham Lincoln (the first photograph in the album), John Brown, Frederick Douglass, and her own family portraits. The album tells a unique story about the Civil War and emancipation from her vantage point in Albany’s African-American community. An unknown photographer caught this scene of former slaves gathered at the Hurricane plantation near Vicksburg, Mississippi. This community successfully operated the plantation after Union troops drove away the slaveholding Davis family. 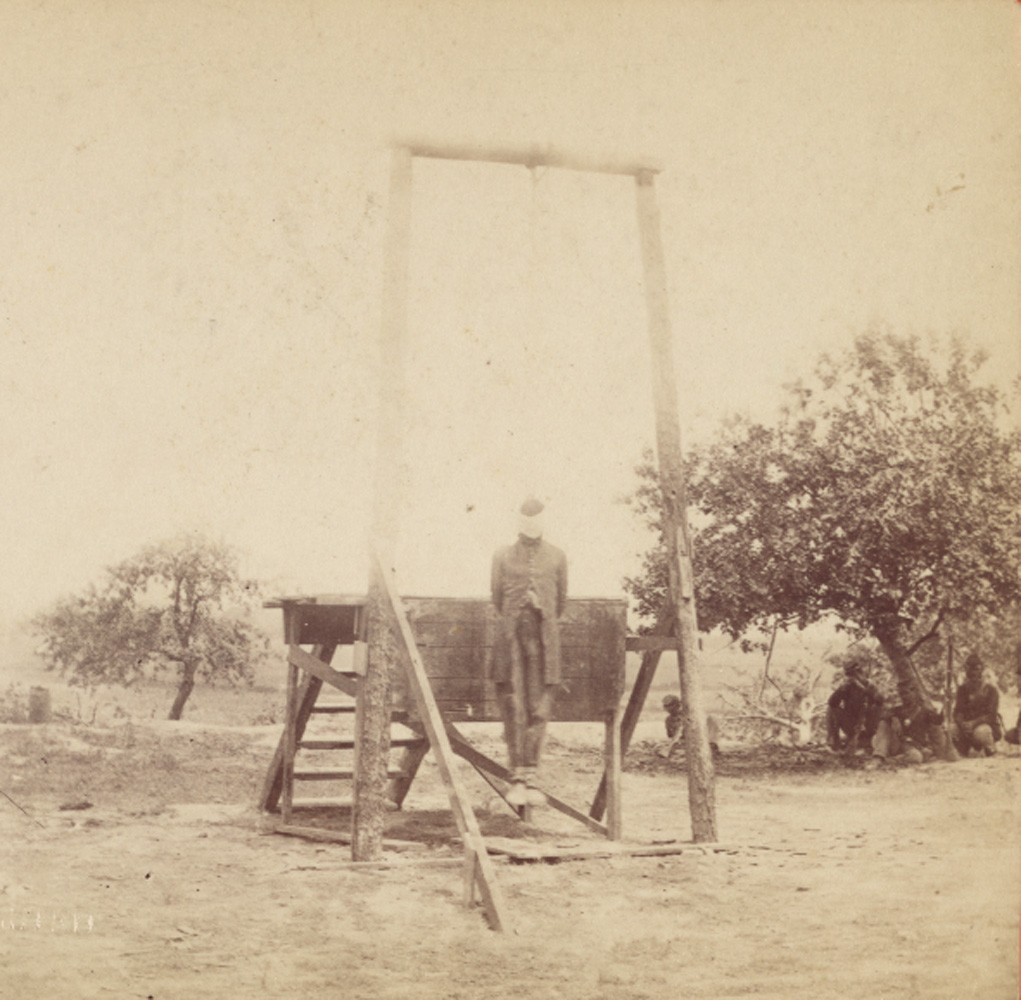 Matthew Brady’s operator Timothy O’Sullivan shot this image of the hanging of William Johnson, a member of the 23rd US Colored Troops. Provost Marshal Marsena Patrick noted in his diary that Johnson was executed after being convicted of desertion and the rape of a white woman. 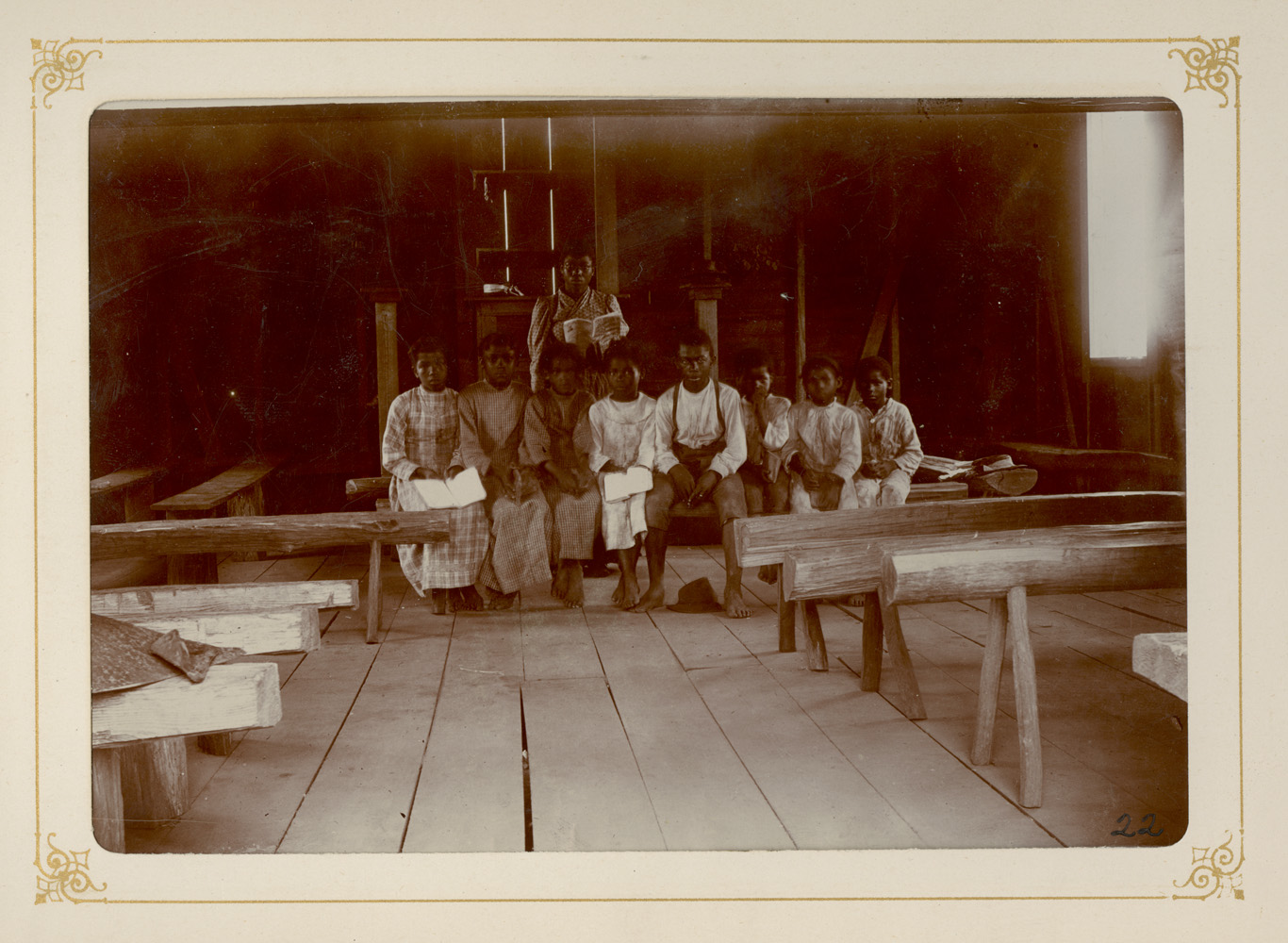 This one-room schoolhouse scene with students and their teacher posing with schoolbooks in hand allows a glimpse of early schooling among former slaves and their children. A photo of “Freedmen’s Quarters” in Florida was included with streetscapes and countryside panoramas to generate interest in southern tourism.

One-sided and typically on large sheets of paper, illustrated broadsides emerged as technological advances in printing made their production inexpensive. They aimed to spread news, shape public opinion, and rally people to action. Their visual appeal was achieved by varying type style and size and including illustrations that could be bold or elaborate. Broadsides were encountered posted on buildings, hung in coffeehouses and pubs, and in homes as decorations. Surviving broadsides permit us to glimpse the making of public opinion in the era of emancipation. The Emancipation Proclamation enjoyed numerous broadside treatments, from simple texts to complex illustrations. While broadsides were widely produced during the era after the American Revolution, only a few legal documents were the subject of repeated broadside interpretation. The circulation of broadside reproductions helped ensure that the Declaration of Independence would maintain its exalted status in the nation’s memory. This example from 1818 sets the text of the Declaration within a series of medallion illustrations. George Washington, John Hancock and Thomas Jefferson are the only Revolutionary-era leaders depicted. The original thirteen United States are represented, each with its own identity. 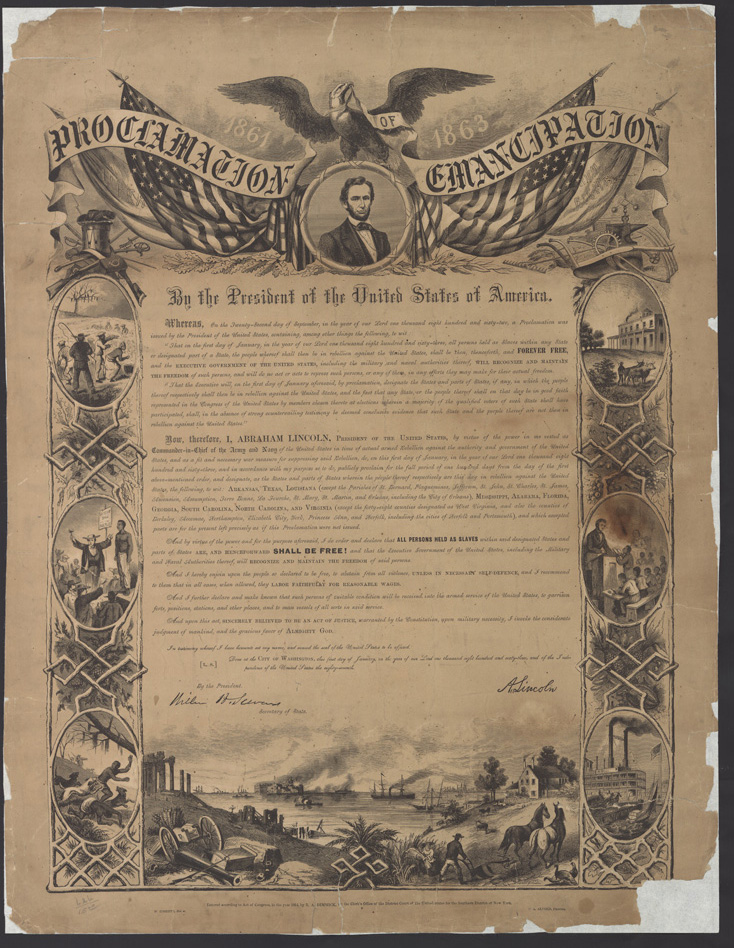 Reprinting the Declaration of Independence presented illustrators with an opportunity to explain what bound the nation together. The broadside treatment of the Emancipation Proclamation was done with the same intent. In this example from 1864, publisher R.A. Demmick explained the Civil War, Lincoln, and the Proclamation through vivid illustrations. The whip, auction block, and slave catchers, depicted at left, were replaced by free labor, education, and economic prosperity, illustrated at right. Lincoln alone sits above this process in which the destruction of war has given way to peace and good order. In this view, the Proclamation and the abolition of slavery are stated as key to understanding the nation’s future well-being.

While today we most often encounter Lincoln’s words through printed text, many Americans first encountered the Emancipation Proclamation when they heard it read aloud. Some readings were intimate, taking place in a home.  Other readings were collective, with groups gathered to hear Lincoln’s words. Dramatic public readings took place before crowds that included anti-slavery activists, former slaves, and soldiers. Artifacts from these scenes evoke the powerful effect of hearing the proclamation read. 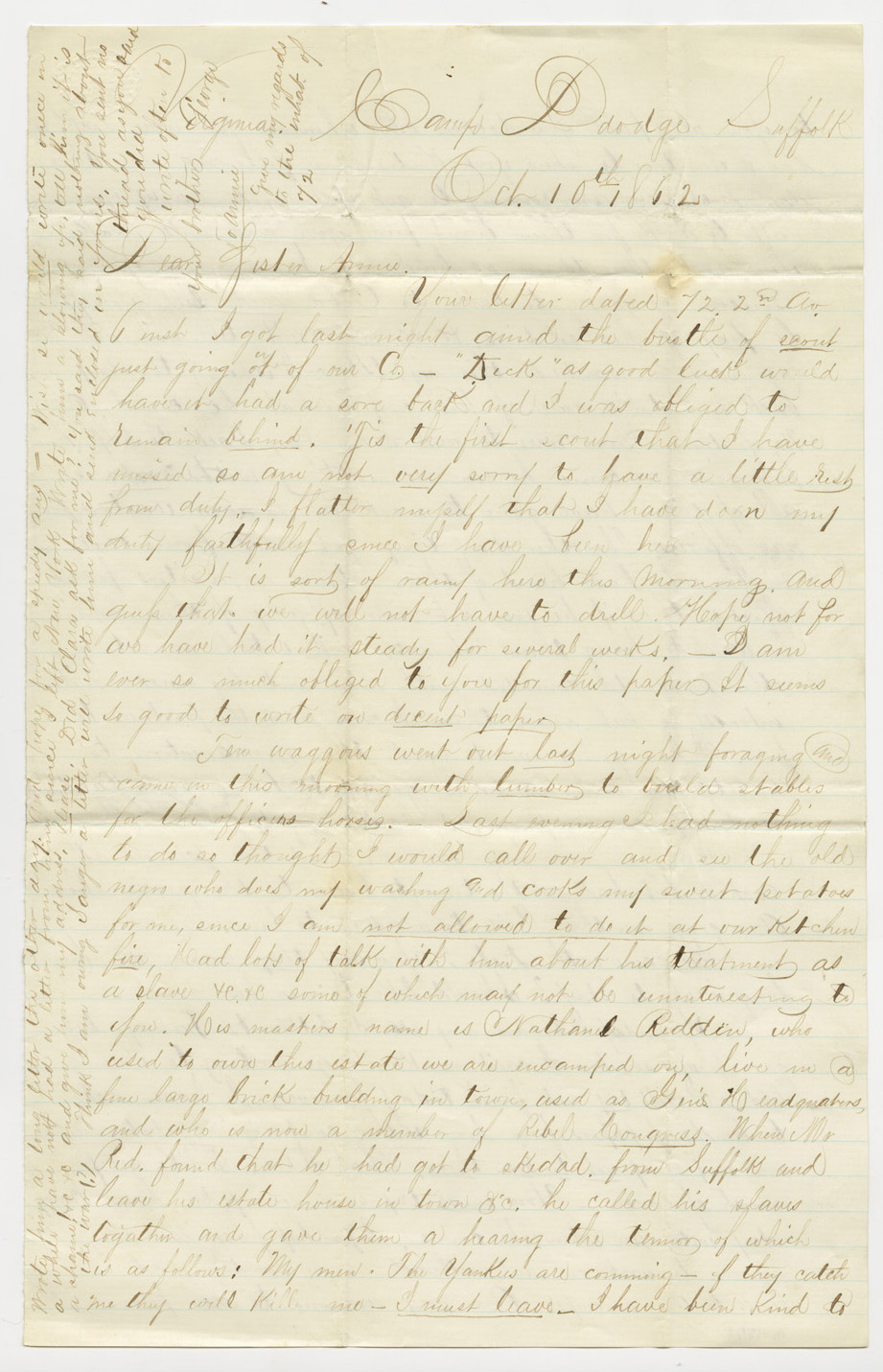 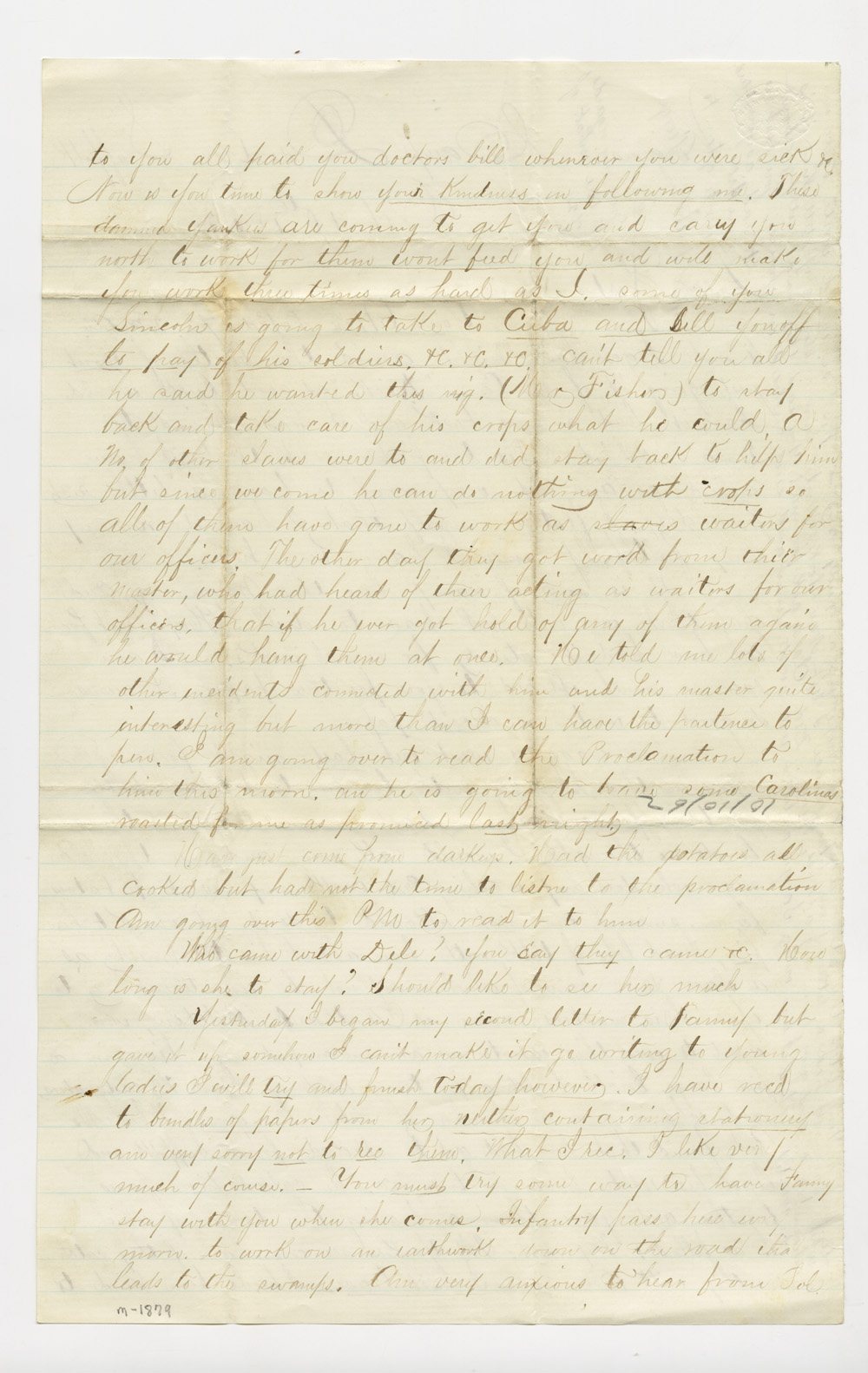 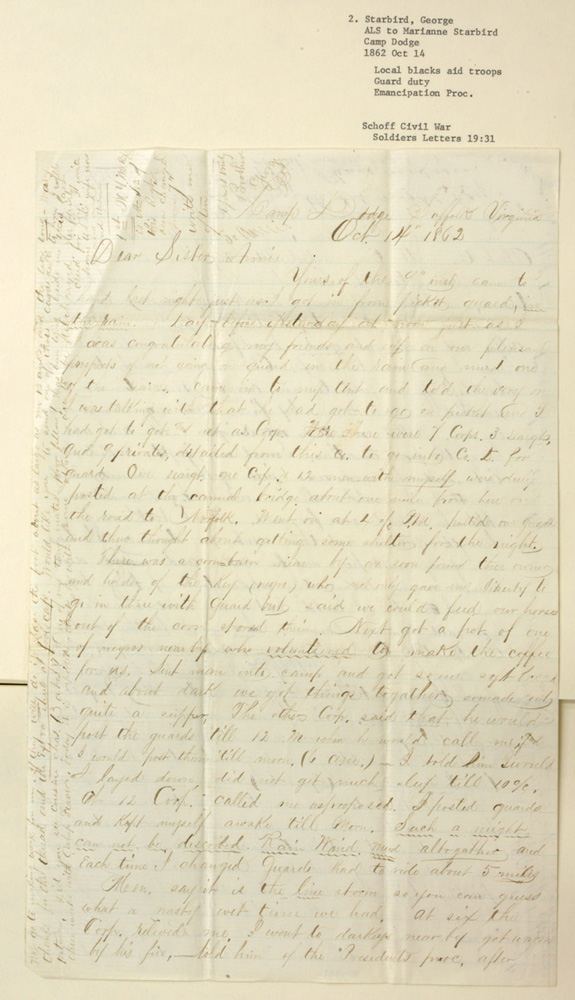 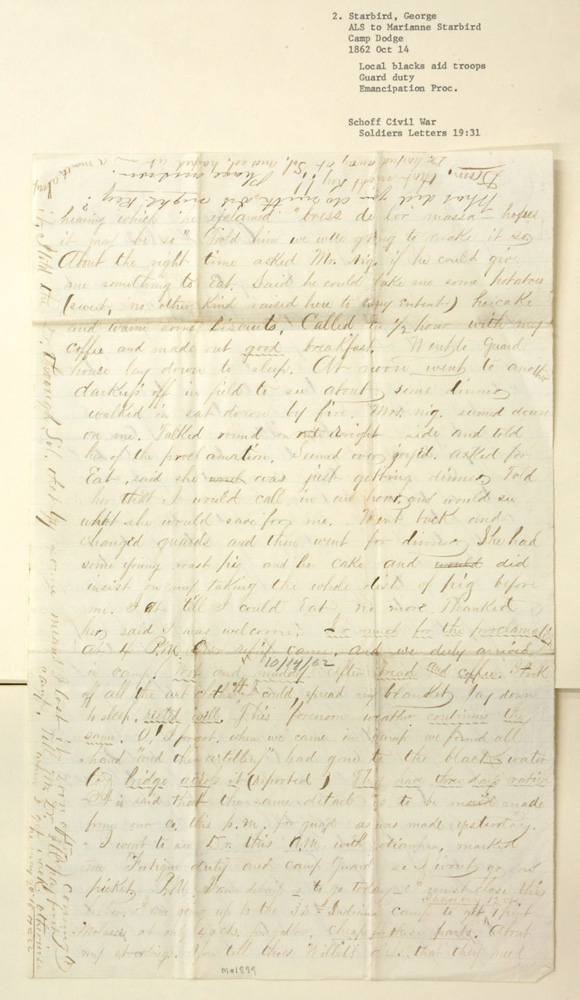 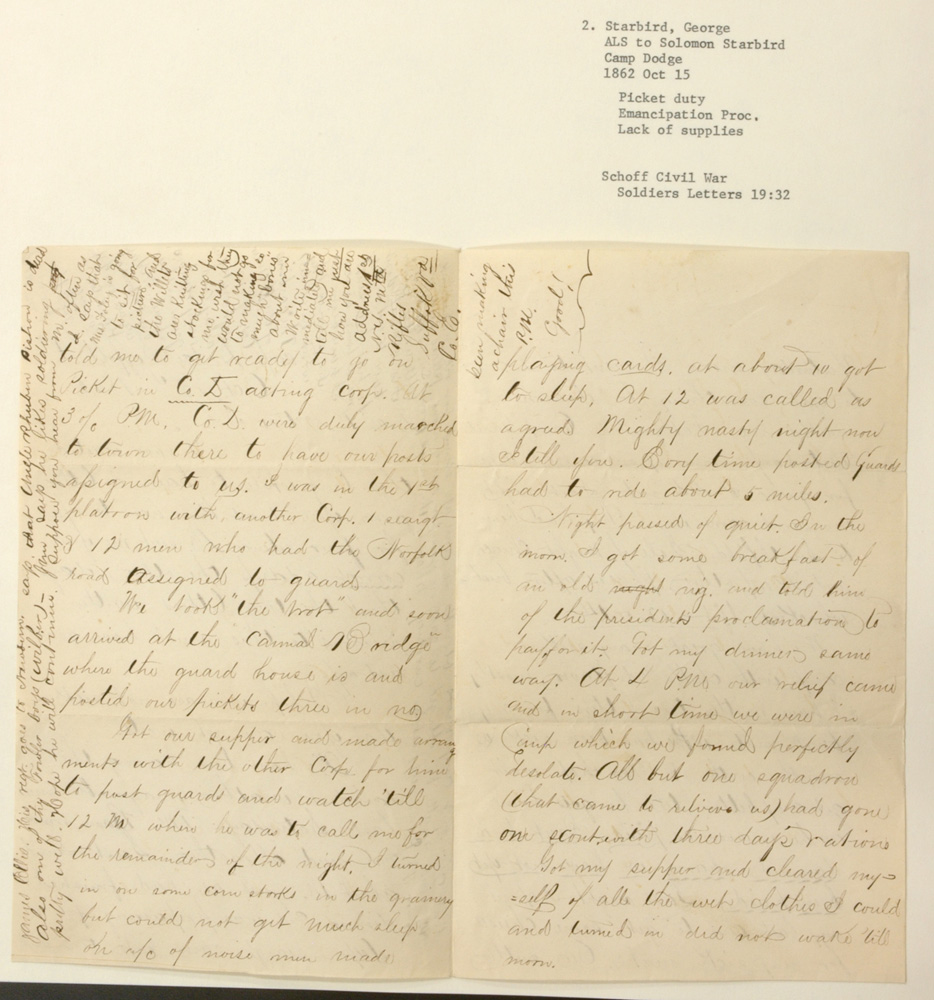 In letters to “Annie,” his sister Marianne, George Starbird, a lieutenant in the 1st New York Mounted Rifle Regiment, describes reading the Emancipation Proclamation in the field. Encamped in Virginia, Starbird explains in crude terms how he bartered readings of the preliminary proclamation for home-cooked meals. African Americans were not satisfied with news of the Proclamation, and they asked for it to be read, word for word, and were willing to share their meager food stores in exchange: “October 10, 1862….Have just come from darkeys. Had the potatoes all cooked but had not the time to listen to the proclamation. Am going over this PM to read it to him.” George Starbird likely carried with him this small pamphlet version of the preliminary proclamation. 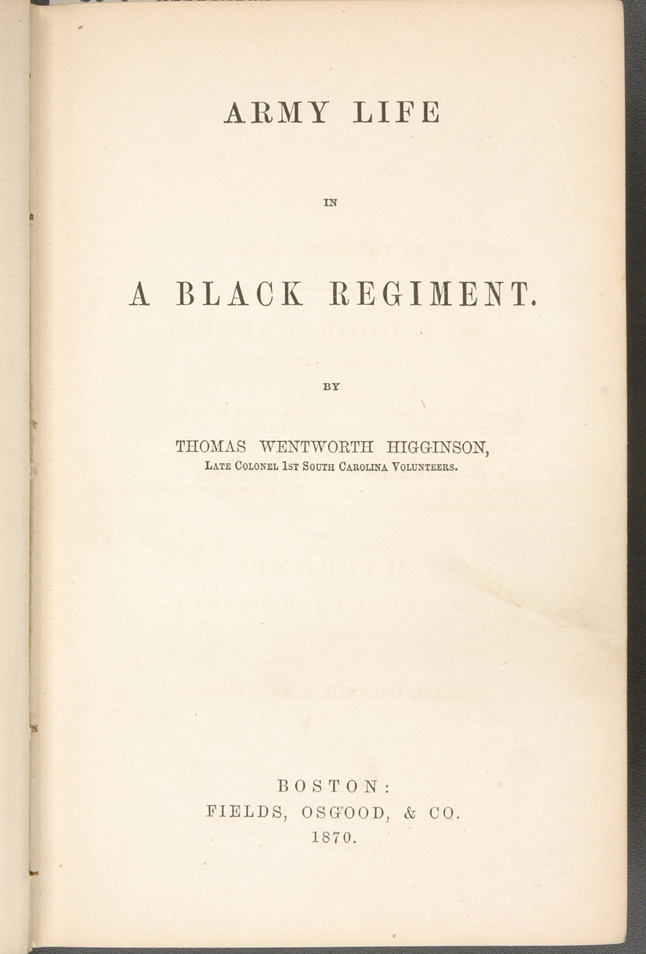 Thomas Wentworth Higginson served as colonel of the 1st South Carolina Volunteers, a regiment of former slaves. Higginson’s troops were stationed at Camp Saxton, near Beaufort, South Carolina. In his memoir, he describes a powerful but unexpected effect of hearing the Proclamation:

Then the President’s Proclamation was read by Dr. W.H. Brisbane….Then followed an incident so simple, so touching, so utterly unexpected and startling, that I can scarcely believe it on recalling, though it gave the key-note to the whole day. The very moment the speaker had ceased, and just as I took and waved the flag, which now for the first time meant anything to these poor people, there suddenly arose, close beside the platform, a strong male voice (but rather cracked and elderly), into which two women’s voices instantly blended, singing, as if by an impulse that could no more be repressed than the morning note of the song-sparrow.—
“My country ‘tis of thee,
Sweet land of liberty,
Of thee I sing!” 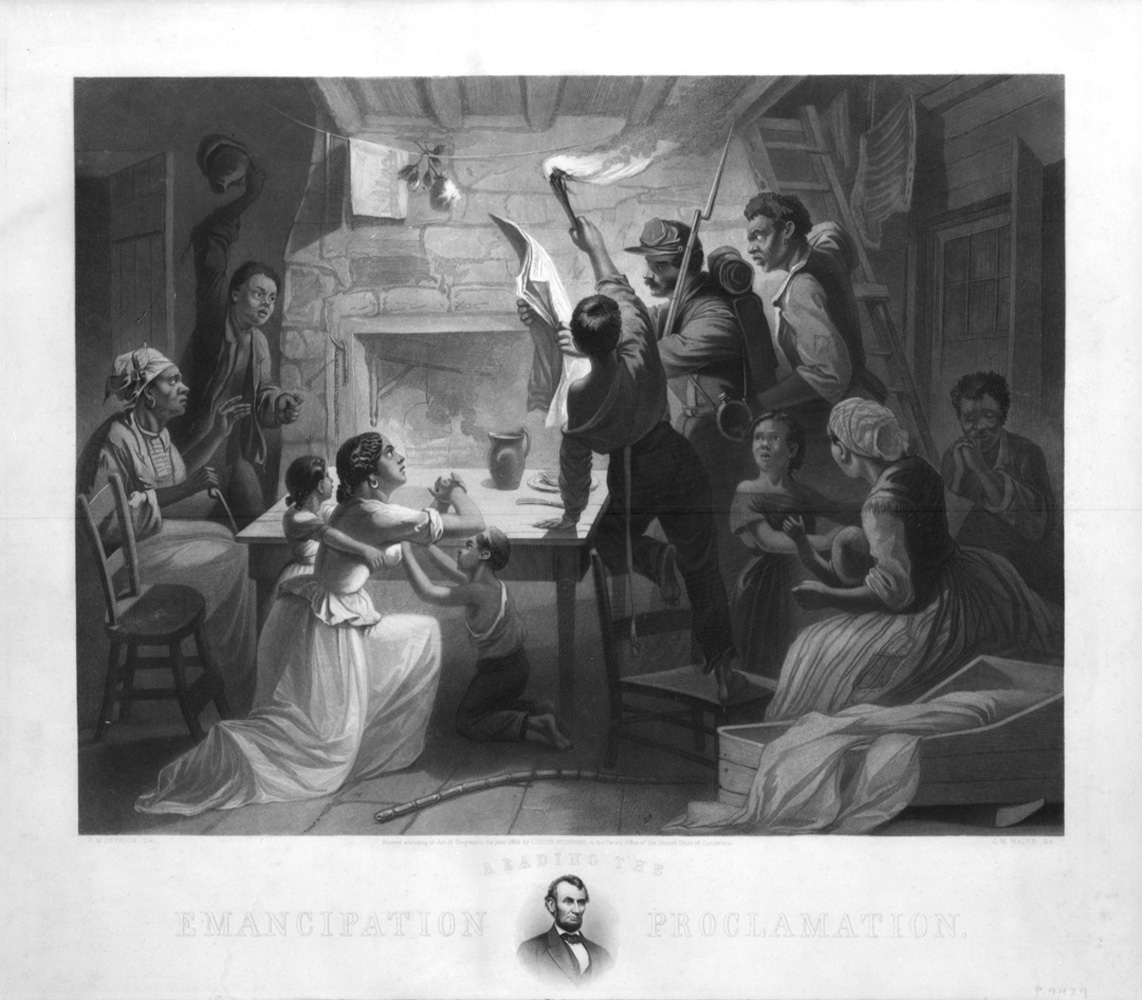 Not all readings were by white officials. This 1864 print, published in Connecticut, suggested the role played by African-American Union soldiers. A family is gathered in a southern slave cabin and gives its complete attention as the Proclamation is read aloud from a newspaper at “the midnight hour.”