Henceforward Shall Be Free

Henceforward Shall Be Free

While the Proclamation provided for freedom, it made only a few suggestions about what freedom might mean. There was military service: many African Americans saw the opportunity to serve in Union forces as an avenue to citizenship. There was security: a federal government that had once used its courts to return fugitives to their owners was now committed to defending the liberty of former slaves. There was labor: when Lincoln stated that freed people should labor for “reasonable wages,” he suggested that the conditions of work would be subject to express negotiations rather than the threat of force. But this was just a start. Enslaved people questioned–even writing directly to Lincoln–whether or not they were free. And if they were free, what might that mean? In the months and years that followed, former slaves, fleshing out the meaning of freedom, reached beyond Lincoln’s short list toward education, family integrity, the capacity to travel, and the building of institutions. 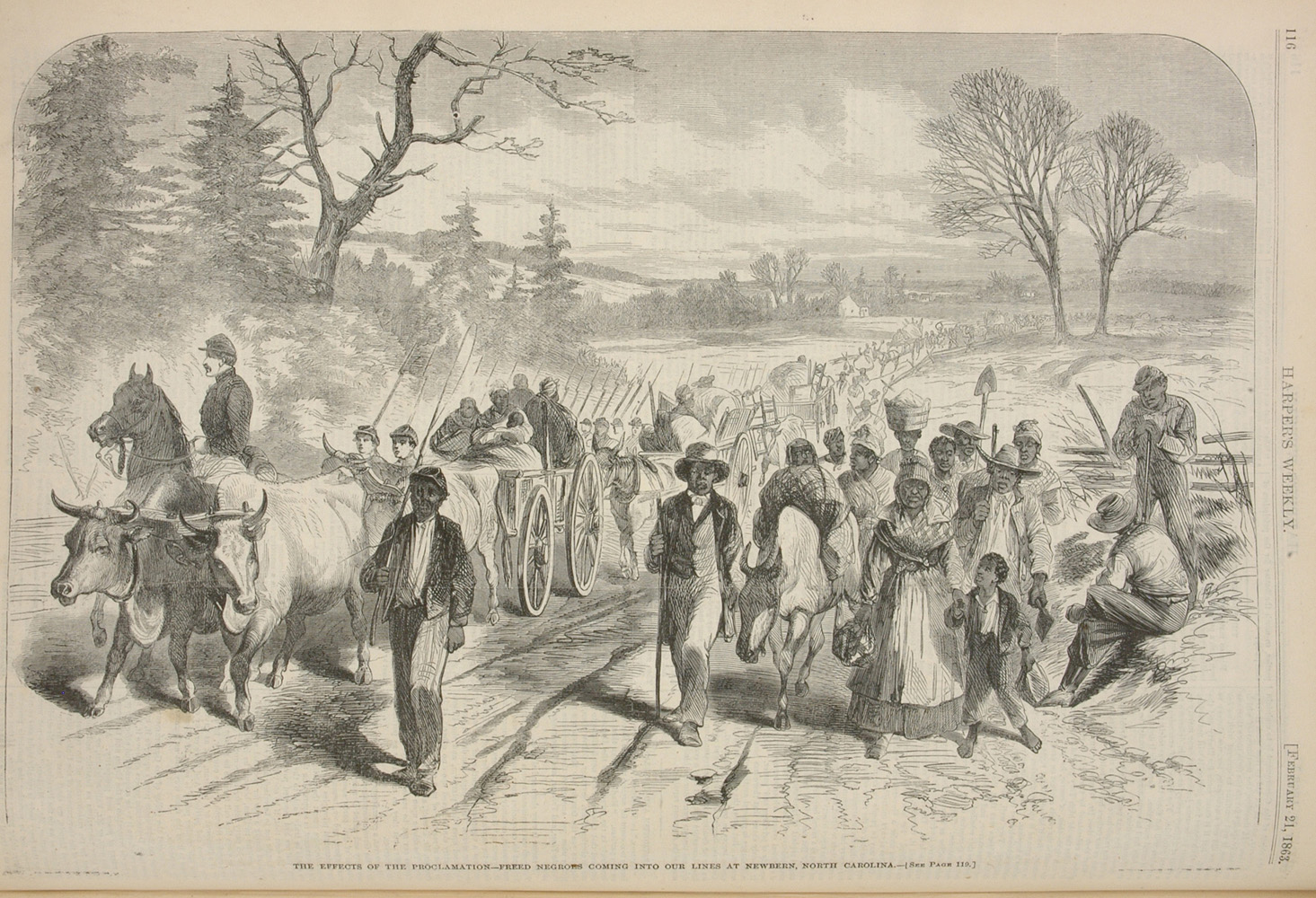 “The Effects of The Proclamation – Freed Negroes coming into Our Lines at Newbern, North Carolina.”
Harper’s Weekly. A Journal of Civilization.
February 21, 1863
Wood engraving

Harper’s Weekly explained to its readers that the original sketch for this image had come from an “amateur,” who wrote:

I inclose [sic] a sketch of a very interesting procession which came to Newbern from “up country” a few days ago. It is the first-fruits of the glorious emancipation proclamation in this vicinity, and as such you may deem it worthy of engraving in your illustrated Weekly.

On our late expedition into Greene and Onslow Counties our company (Company C, Fifty-first Massachusetts Regiment) was out on picket duty the night before our return to Newbern, when an old slave came in to us in a drenching rain; and on being informed that he and his friends could come to Newbern with us, he left, and soon the contrabands began to come in, with mule teams, oxen, and in every imaginable style. When morning came we had 120 slaves ready to start with their little all, happy in the thought that their days of bondage were over. They said that it was known far and wide that the President has declared the slaves free.” 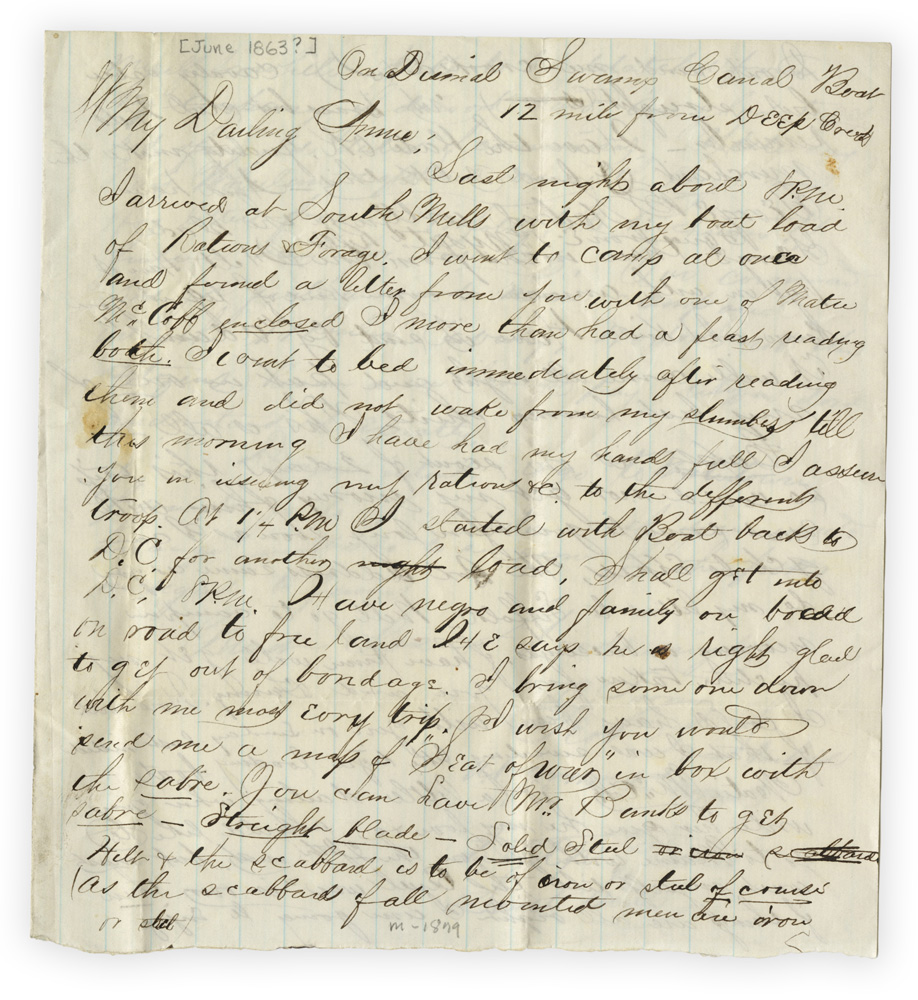 The freedom to travel was an early hallmark of emancipation. George Starbird describes encountering former slaves during his work navigating the Dismal Swamp Canal as a member of the 1st New York Mounted Rifles: “Have negro and family on board on road to free land. He says he is right glad to get out of bondage. I bring some one down with me most every trip.” 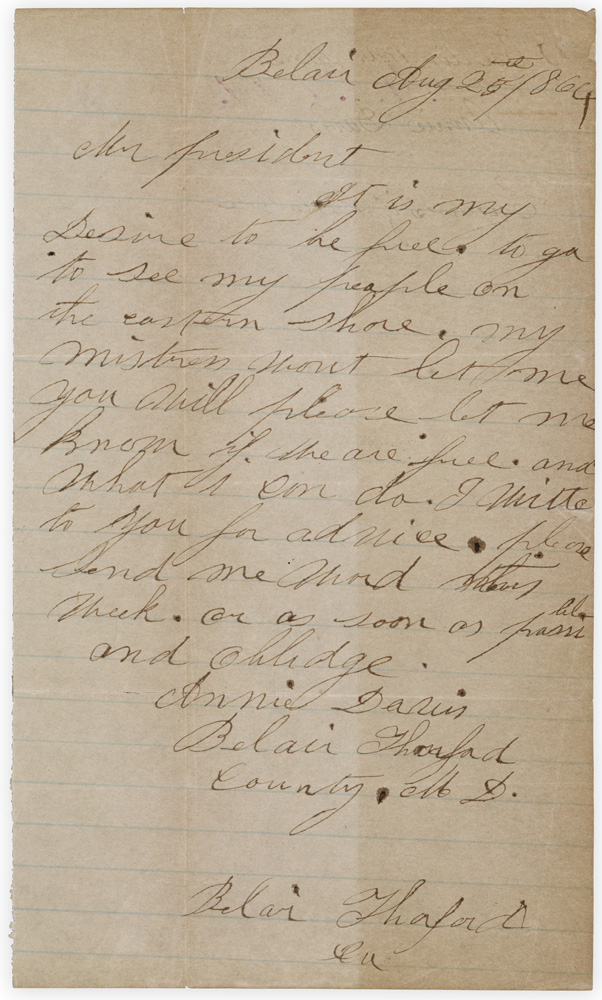 After the Proclamation, some enslaved people remained uncertain about their status. Annie Davis in the border state of Maryland writes directly to the President, asking for clarification. Mrs. Davis was likely still enslaved when she wrote in August 1864; Maryland abolished slavery months later in November.

“Belair Aug 25th 1864
Mr President
It is my Desire to be free, to go to see my people on the eastern shore my mistress wont let me you will please let me know if we are free and what i can do. I write to you for advice please send me word this week or as soon as possible and oblidge.
Annie Davis 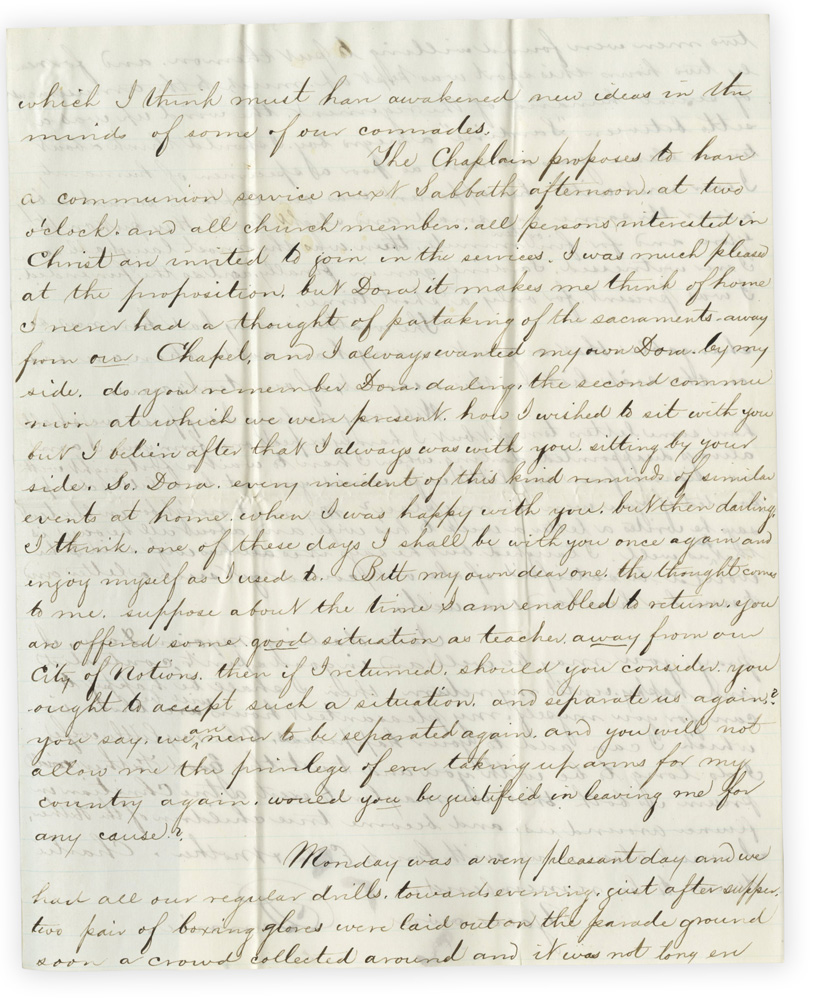 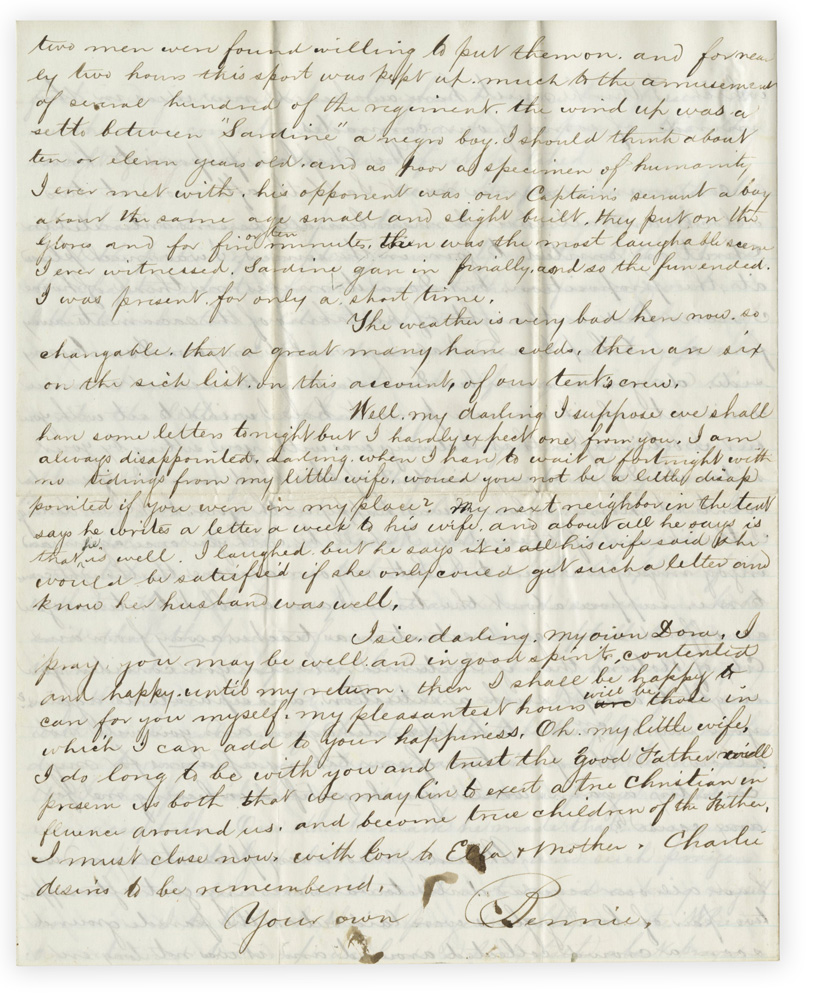 Encamped in Maryland, Benjamin Lincoln commented on how young men became a source of entertainment: “Just after supper, two pair of boxing gloves were laid out on the parade ground . . . The wind up was a sette between “Sardine” a negro boy, I should think about ten or eleven years old, and as poor a specimen of humanity I ever met with. His opponent was our Captain’s servant a boy about the same age small and slight built. They put on the Gloves and for five or ten minutes there was the most laughable scene I ever witnessed.” 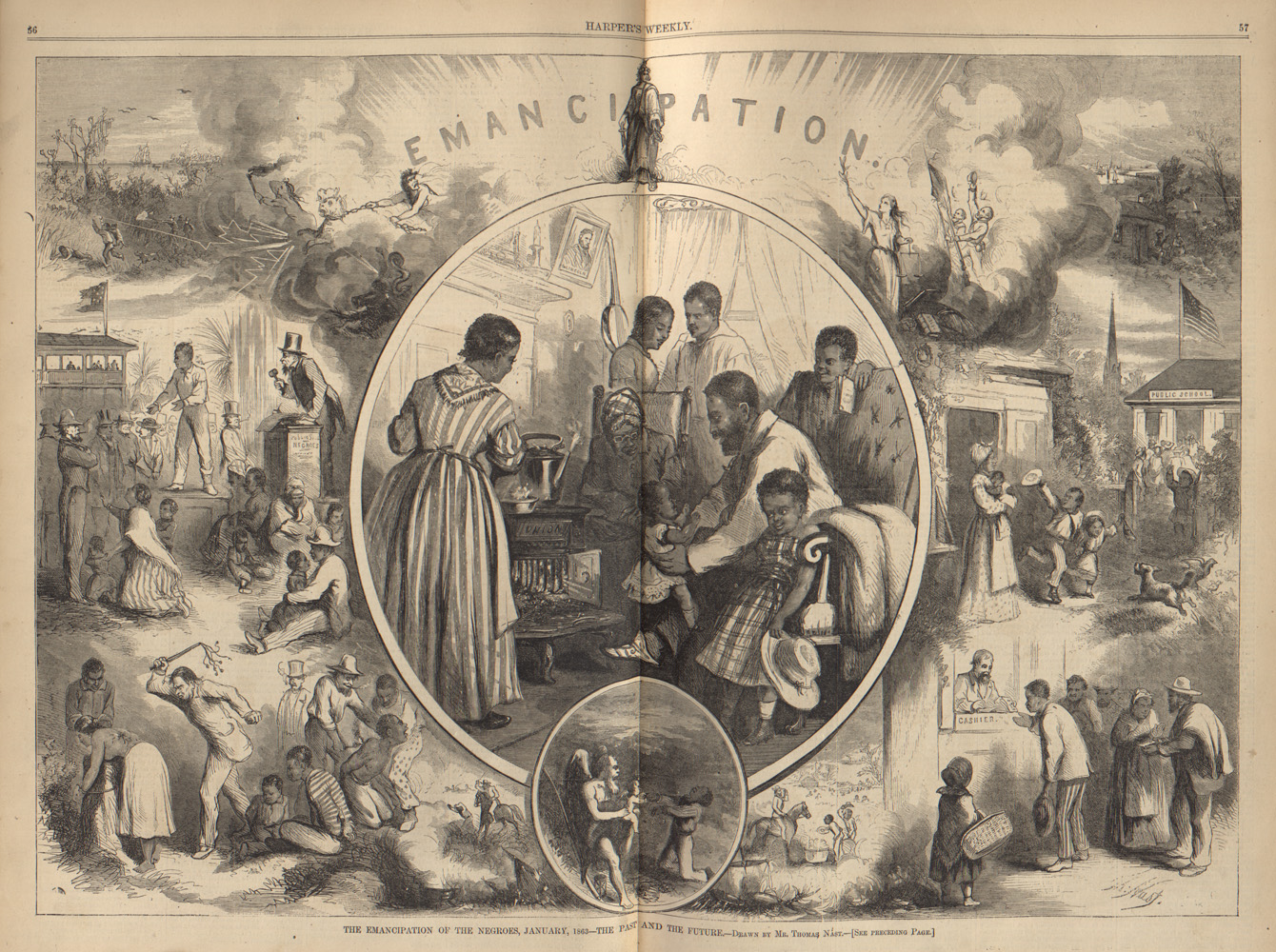 The Emancipation Proclamation opened the door to ambitious new imaginings of freedom. Here, Harpers Weekly’s best remembered illustrator Thomas Nast produced a powerful rendering of an enslaved past and a free future. At the center is family, and the auction block and whip are replaced by school, church and work for wages. 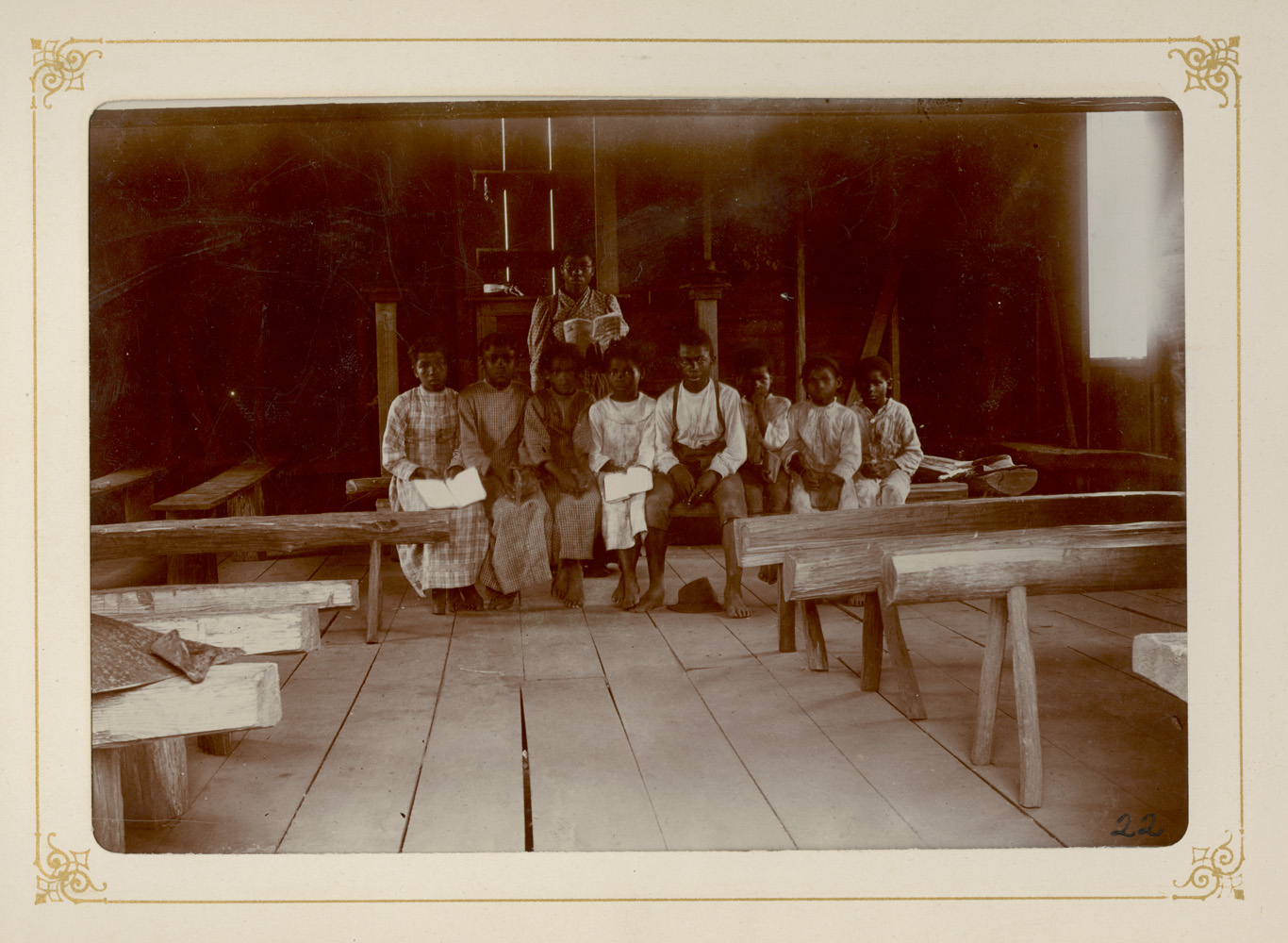 Education very quickly emerged as a key dimension of freedom as African American communities, missionary societies, and the military organized schools. A young woman teacher, likely educated during the immediate post-war years, gathers with her own pupils. 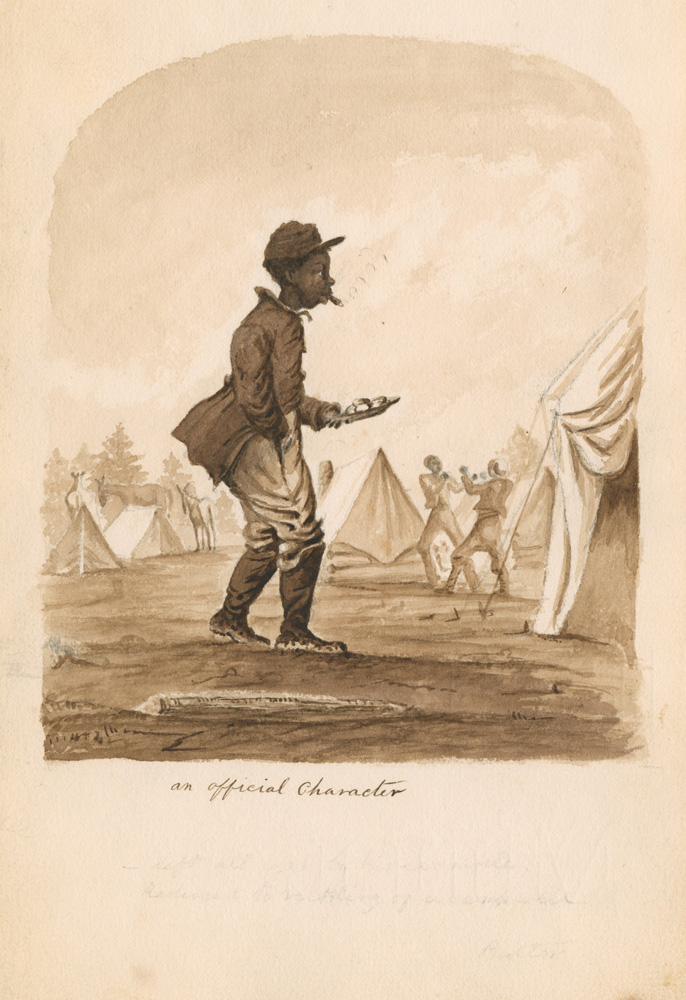 Trooper Edgar H. Klemroth of the 6th Pennsylvania Cavalry sketched his way through Virginia. Here, his curiously titled portrait of “An Official Character” suggests the complex demands put upon young African American men when they joined with Union forces. Was working in Union camps freedom?