The Clements Library is pleased to announce that the following collections are now described online and may be requested for use in the reading room. (The Clements Library is currently open by appointment only for U-M faculty, students and staff and Clements research fellows.) Before planning your research visit, please verify in advance if our normal open hours for researchers have resumed. For all researchers, we are happy to schedule a video consultation instead of a visit to the library. Please email us at clements-reference@umich.edu to set up a consultation.

Thomas Leech collection (1811-1816)
The Thomas Leech collection primarily consists of six letters from coffee planter Thomas Leech of Havana, Cuba, to his nephew Charles Jenkins at the plantation at San Marcos, Cuba. The letters pertain largely to the transportation of horses, jugs, ropes, onions, snuff, clothing, coffee, tobacco, and other goods between the city and the plantation. Leech remarks on the low price of coffee, recovering escaped enslaved persons, and business prospects. Two additional letters in the collection are by Joseph Scull, executor of Leech’s estate following his death in 1815, to N. B. Boileau in Philadelphia (possibly the family’s attorney stateside). Scull’s letters shed light on problems that Leech was facing, including a mortgage with Savage & Dugan, insufficient slave labor, and a falling out between Leech and Jenkins.

George S. Payne letters (1838-1845, 1857)
This collection is made up of ten energetic and at times impolite letters from sailor George S. Payne to his cousin Fayette W. Pierce, 1838-1845, and two miscellaneous incoming letters to Pierce. Payne wrote six letters from areas around New York City, both on land and shipboard (the brig Erie, bark Chancellor, and schooner Laurel), describing his leisure activities, attendance at church services, preparations for sailing, and a robbery of items on his boat. On arriving back at New York from a voyage to Buenos Aries, Argentina, in June 1842, he vividly described political assassinations and executions under General Juan Manuel de Rosas. The same year, he wrote a diatribe against the Thanksgiving holiday, focusing on the inhumane treatment of farm animals. Payne suffered from rheumatism and spent part of 1845 receiving treatment near Tampa, Florida, and recovering in St. Louis, Missouri. One of the remaining letters to Pierce, from J. F. Payne in 1857, includes a vivid and poetic description of travel to Florence, Nebraska.

Nelson W. Winton diary (1843-1847)
Nelson W. Winton kept this diary between 1843 and 1847, at the ages of 14 to 17, while living with his aunt and uncle (a physician) in Havana, Chemung County, New York. Winton wrote about his attendance at district and select schools at Havana, taught by Rufus Burr and James H. Gage, and at the Owego Academy. He attended Episcopal, Methodist, and Presbyterian religious meetings, as well as temperance gatherings. Winton wrote regularly about helping with labor, such as killing and butchering cows and pigs, and chopping wood. He documented leisure activities, such as sleighing, skating, sledding, attending picnics and concerts, spending time in nature with his friends, interacting with young women, and other activities. On multiple occasions, he traveled to Geneva, Oswego, Syracuse, Binghamton, and other areas in New York State. Winton regularly recorded information about events that took place on holidays, including George Washington’s Birthday, Independence Day, Thanksgiving, Christmas, and the New Year. At the end of the diary (pages 106-108, 118-157), Nelson Winton copied his compositions and speeches on subjects such as a dream, Greek and Roman history, pin making, the deleterious effect of reading novels, slavery, and other topics.

Jonathan D. Roberts account book (1855-1865)
This volume contains accounting pertinent to Jonathan D. Roberts’ guardianship of Timothy Stevens of Farmington, Strafford County, New Hampshire between 1855 and 1864, with all accounts settled in 1865. Timothy Stevens had been a farmer, but by 1850 suffered from some form of mental illness that prevented him from managing his own finances or property. Roberts’ accounts include an inventory of Stevens’ estate, probate court costs, various sundry bills and costs for farm repairs, annual payments for Timothy’s clothing and board, the rental of his farm, and interest.

Hosea Allen and Rodman Palmer collection (1857-1870)
The collection consists of correspondence and financial documents between Rodman Palmer, surveyor and land agent, and Hosea Allen concerning land in Chippewa Falls, Wisconsin, granted to Ann Meech Williams (1776-1857), Hosea Allen’s mother-in-law, as a land bounty which was part of her widow’s pension granted on the basis of husband David William’s (1748-1835) Revolutionary War military service. Allen was Williams’ executor who handled both of her military pension claims–the other was based on the service of her first husband, Timothy Meech (1741-1825).

Phebe Whitford diary (1862)
Eliza “Phebe” Whitford kept her diary between January 1 and December 31, 1862, recording her itinerant life away from home with various relatives in Cattaraugus County, New York, and reflecting on her psychological and religious inner life. She recorded her diary entries in the regular blank pages of a small (3.25 x 2.5″) printed volume, “Daily Texts, with Verses of Hymns: Adapted for General Use” (N.Y.: American Tract Society, n.d.). Phebe Whitford was a Seventh Day Baptist and attended regular services and meetings. She ruminated on her faith and on her anxious and nervous state, noting that when disappointed she was apt to distrust God. She remarked on hearing Elder [Julius M.?] Todd (passim) and Silas Burdick (March 22) preach, friends going off to fight in the Civil War (June 30), attendance at a Gerrit Smith meeting (July 20), the arrival of a “real smart” fugitive slave in town (August 8), and the presence of an African American man named West at their meeting (August 10). She also attended singing school and practiced on the melodeon. 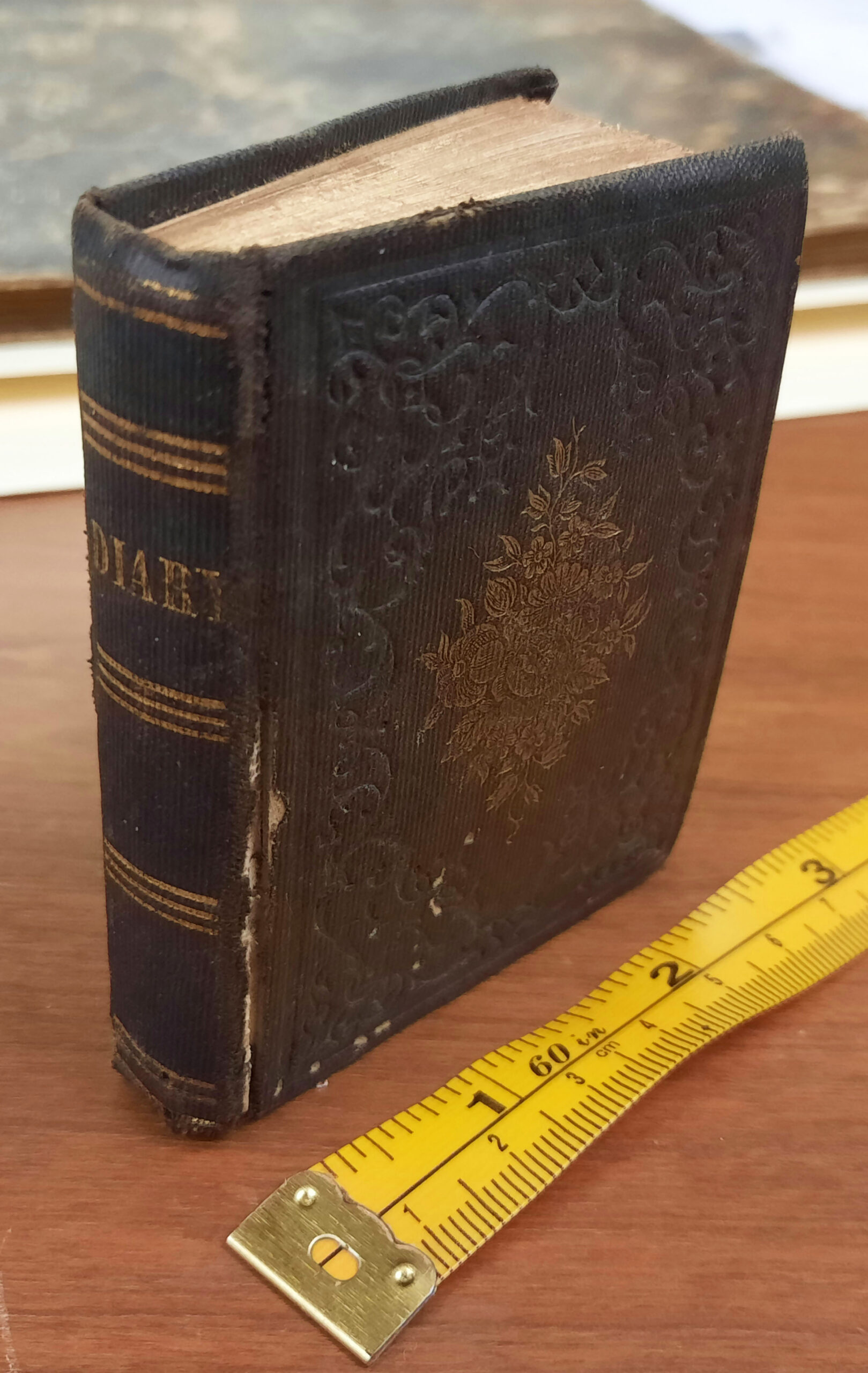 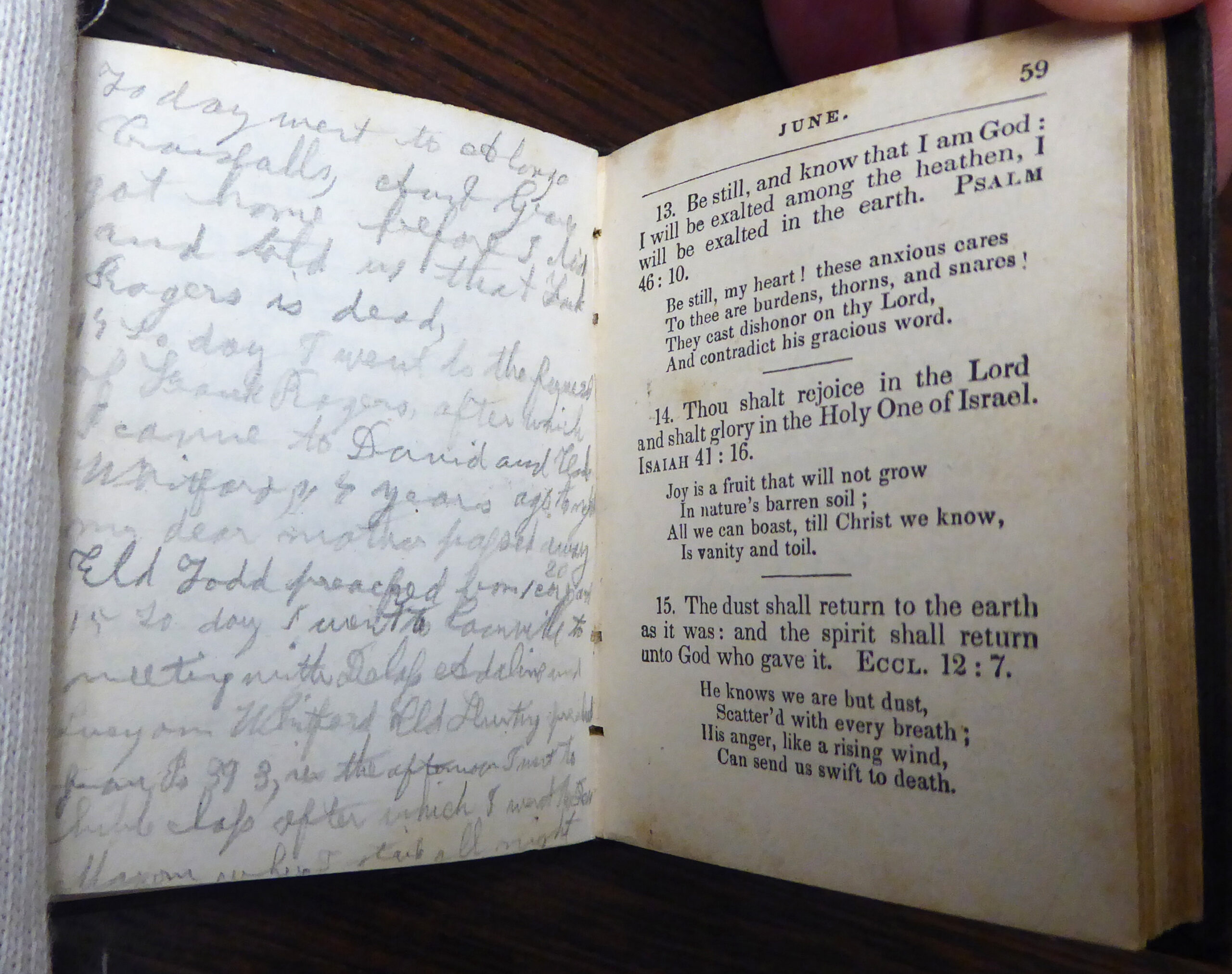 Austin E. Lyon diary (1862-1866, bulk 1863)
This collection is a single pre-printed 1860 daily diary kept by Austin E. Lyon of Dundee and Tecumseh, Michigan, largely documenting his April-May 1863 travel from Southeast Michigan to California, via Detroit, Windsor, Niagara Falls, Rochester, Northville, Poughkeepsie, New York City, the steamer North Star, and across Panama (17 pages). The account ends around the time his ship reached Cape St. Lucas, May 24, 1863. Lyon tended to describe the various landscapes he viewed during his travels, focusing particularly on Northville, New York, where he visited family. He also wrote about seasickness, playing games with fellow travelers, and attendance at church. On April 28, 1863, he wrote about the arrival of the 7th and 8th Infantry in New York City to great fanfare. Twelve pages at the opening and closing of the volume are filled with accounts, notes, and lists, dating from 1862 to 1866.

John D. Townsend scrapbooks (1869-1893)
New York City lawyer John Drake Townsend kept these two scrapbooks between 1869 and 1893. Numbered seven and eight and totaling approximately 340 pages, they contain pasted-in newspaper clippings chronicling his court cases or cases that interested him. The bulk of volume seven pertains to the removal of N.Y.C. police commissioners by Mayor Edward Cooper in 1879. Much of volume eight regards the 1879 murder of socialite Jane Lawrence DeForest Hull, who was accidentally suffocated while being robbed by her former lover Chastine Cox, an African American man.

Samuel W. Bragg Obstetric Practice record (1879-1909)
This volume is made up of Dr. Samuel Watson Bragg’s entries regarding his obstetrics practice in Burlington and Lincoln, Maine, 1879-1909. Each entry may include the name of the mother (sometimes listed by their husbands’ names, i.e. “Mrs. Rev. John Todd”), the date, the sex of the child, complications or ease of labor and delivery, notes on premature birth, whether or not the child was the woman’s first or not, whether or not ether or instruments were used during the birthing process, and other information. The weight of the child was occasionally documented. Dr. Bragg also noted purposeful or accidental abortions and miscarriages, and in some cases the deaths of mothers. A photograph of Dr. Bragg in front of his office, apparently with his daughter, is pasted into the inside cover of the volume.

Leflore County (Miss.) Coroner’s Jury documents (1887)
This collection is made up of five documents or drafts of documents pertinent to a coroner’s jury called to investigate the discovery of the body of a deceased black man in the Tallahatchie River near Shellmound, Mississippi, September 1887. The documents include an order by Justice of the Peace A. P. Parks for the sheriff to summon a coroner’s jury (September 28, 1887), the jury’s certification of the death of Harry Taylor (September 28, 1887), testimonies of witnesses providing hearsay about the discovery of two bodies in the river and the role of local black Freemasons in their deaths, a jury statement that the body was that of Harry Taylor and that he’d been killed by named black Masons, and a manuscript account for payment to the jury and others (September 30, 1887).

Edward A. Roher letters (1901)
This collection is made up of six letters (with five accompanying envelopes) from Confederate veteran Edward A. Roher to his friend E. P. Freeman, written from the Bloomingdale Insane Asylum in White Plains, New York. Freeman and Roher were fellow residents of the Home for Old Men and Aged Couples in New York City, or as Roher called it, “the Home.” Roher wrote that “Mr. Cammon” [President of the Home, Hermann H. Cammann] placed him in the asylum and that only with his approval could Dr. Durham be convinced to send him back to the Home. In an undated letter, Roher wrote that a former matron of the Home had him removed because she was afraid he “was becoming mad or unmanageable of otherwise undesirable for a boarder.” He also described his section of the asylum, lamented his loneliness and unhappiness at being retained against his will, and noted that he destroyed many of the letters he had written because they were “queer, disconnected, ridiculous, and useless.” 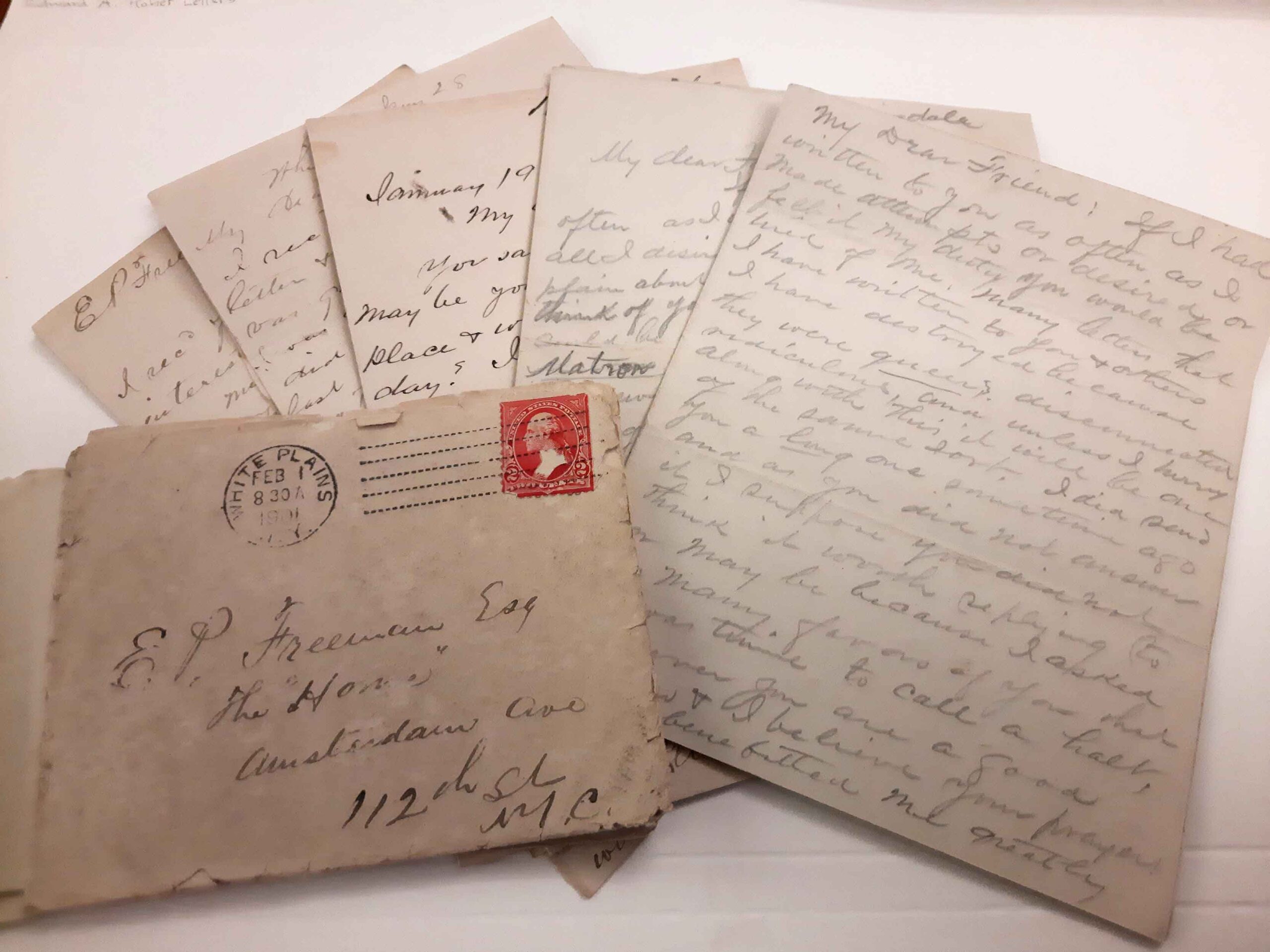