This third blog post in a three-part series titled “Empire and Encounter at Detroit” (read part 1 and part 2) uses James Sterling’s letter book to enter the world of early 1760s Detroit, as the British Empire sought to exert power and influence in territories newly won from New France in the Seven Years War. From mundane packing of fur bales to a dramatic narration of Detroit’s siege by Native forces, Sterling’s letters cover many topics and are of great interest to historians. Most interesting are Sterling’s relationships with local French and Native communities, often fraught but ultimately central to Sterling’s commercial and social success.

James Sterling’s letter book begins with a vivid retelling of a Native Council held at the “Wiandot Town [sic]” near the mouth of the Detroit River on July 3, 1761. Sterling looked on, and may have interpreted, as representatives of the Six Nations met with British Indian Department officials, military officers like Captain Donald Campbell, and leaders and ogimaag (chiefs) from local Ottawa, Wyandot, Ojibwe, and Potawatomi villages. Adding in interpreters, family members, spectators, and others, this was a large and important gathering meant to establish some sort of accommodation and understanding between Native polities and the recent newcomers, the subjects of the British Empire.[1]

The Wyandot village mentioned by Sterling, near today’s Wyandotte, Michigan, was just one of many Native American villages located in the broader region extending from the mouth of the Detroit River north through Lake St. Clair, and up the St. Clair River to Lake Huron. From the time of Sterling’s arrival in Detroit in 1761 through to his departure, this region, and indeed the entirety of the Western Great Lakes, was a space dominated by Native peoples, where settlers remained a demographic minority well beyond the turn of the century.

As a fur trade entrepôt and collection point for surrounding regions, Detroit attracted Native peoples with beaver, raccoon, fox, otter, deer, bear, wolf, marten, and buffalo pelts to trade.[2] But to barter and trade with Native people, some of whom travelled from as far away as present-day Minnesota and North Dakota, Sterling needed to be able to communicate. To that end, he hired a Mohawk man to serve as a translator. This man would accompany Sterling on trading forays to nearby posts at Sandusky and Mackinac, translate and perhaps guide, make introductions, and generally facilitate the exchanges central to Sterling’s business. 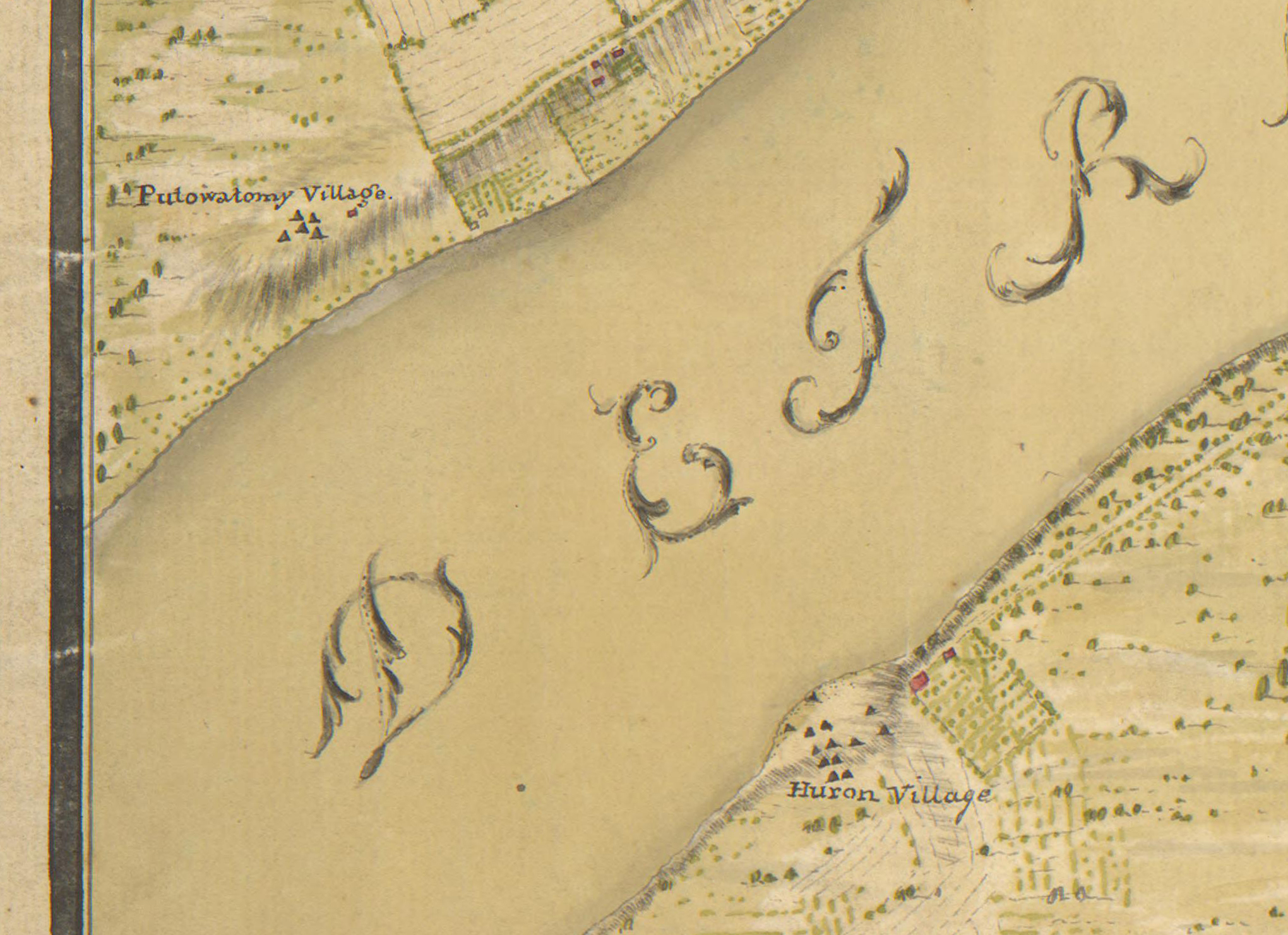 On the north side of the Detroit River a road extending west from the fort terminated at a Potawatomi village located on a high ridge. Almost directly opposite, on the south shore, stood a Huron village, Jesuit mission house and church, and farmlands. Detail from John Montrésor, Plan of Detroit with its environs, ca 1763.

We know how much this Mohawk man earned—£30 Pennsylvania currency for one year’s service—but few other concrete details.[3] He could converse with the local nations that made up the Three Fires Confederacy (Ojibwe, Ottawa, and Potawatomi), and perhaps travelled through the region in earlier decades as part of Iroquois diplomatic efforts. Sterling could leverage his linguistic abilities and geographic knowledge to form trade relationships with local communities. References to Native workers and Native labor shed important light on the activities of Native Americans beyond the traditional leadership figures that appear in manuscript sources like treaty documents, Council minutes, and land deeds. Sterling’s letters are rich in this material and his correspondence reveals a wide variety of arrangements with Native workers from contracted labor to piecemeal work to in-kind payments of goods for various services.

Native men, and occasionally Native women, found employment in Detroit by carrying the letters of merchants and other figures back and forth across Great Lakes trade routes. Mention of delivery by “Indian Express” or the expectation of a letter carried by a Native person is a frequent refrain in Sterling’s correspondence, and it seems that military officials also hired Native men to carry important military communications. Whether by foot, by horse, or by canoe, Native men travelled between fur trade and military posts carrying the vital correspondence of Imperial authorities and mercantile figures. 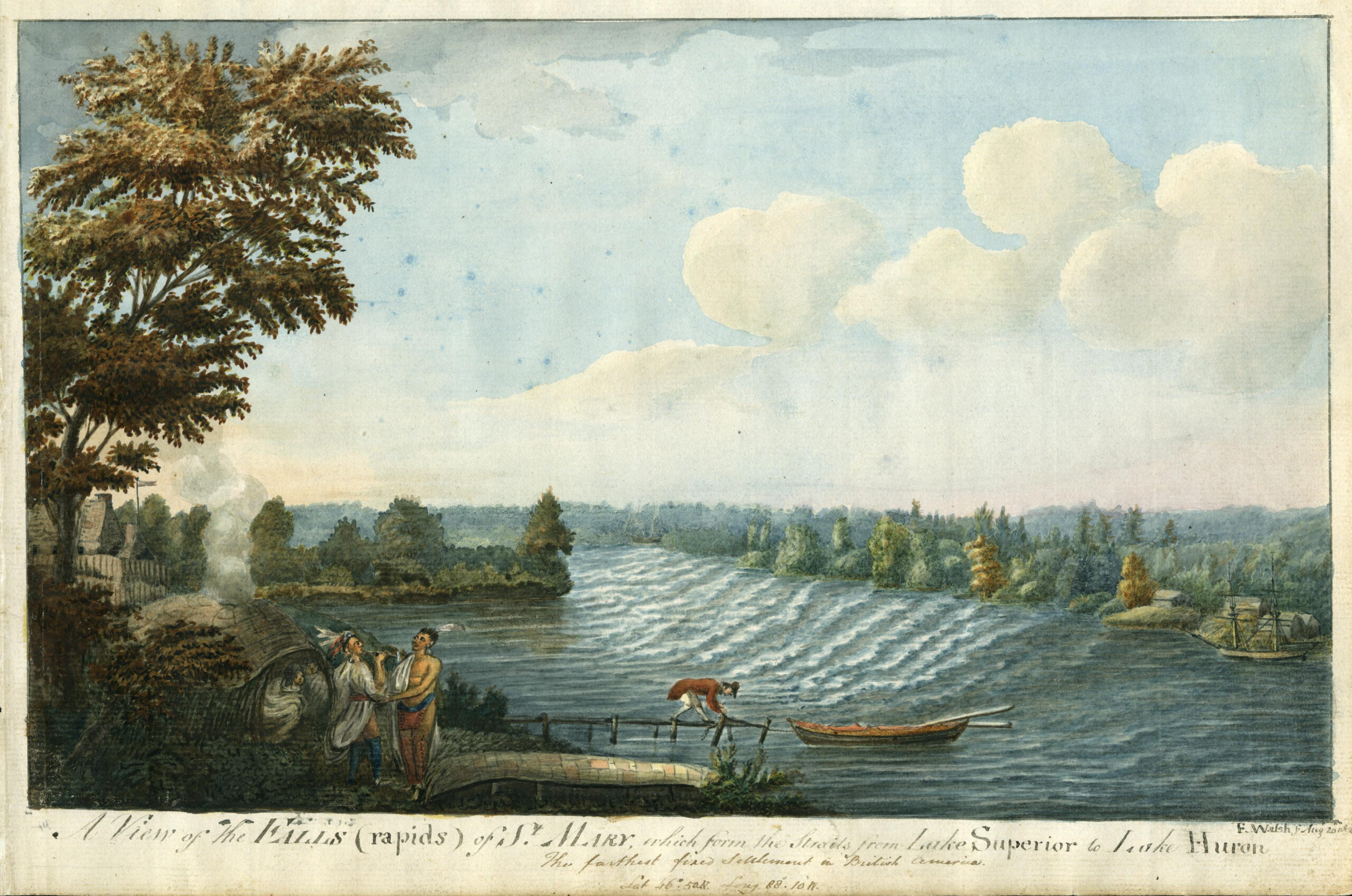 Archaeological evidence suggests Native American populations lived at the “Straits,” today Sault Ste. Marie, Michigan, for at least 12,000 years. This was an important fur trade site and Sterling frequently visited, or dispatched clerks, to trade with Native populations residing there. Edward Walsh, A View of the Falls of St. Mary, which form the Straits from Lake Superior to Lake Huron, ca 1804.

Native women appear less frequently in Sterling’s letters. Beyond the wide range of labor performed by Native women within their communities, historians have shown that Native women from the Detroit area worked to produce moccasins that were sold to merchants and subsequently exported to Atlantic World and European markets. Tanneries were other potential sources of employment, and there is evidence that Native women worked as couriers. When Native women are mentioned by Sterling, they are often crudely racialized or sexualized. The below letter from 1762 is one example:

…but sorry on the other that you find the place so disagreeable for want of the Company of the fair sex: my hurry of Business prevents my having so much pleasure in their Company as might be expected by one in such an agreeable situation, wherefore am obliged to content myself with those of the Copper Hue; I would humbly recommend the same to you, pro tempore it is a good standing colour, and like the True Blue, which never stains.[sic][4]

Written long before Sterling’s 1765 marriage to a French woman of elite status, Angélique Cuillerier, this letter brings into relief the attitudes of British men, most unmarried, who flocked to the Great Lakes. For Sterling, Native women were viewed as sexual objects and not suitable marriage partners like their white French female counterparts. An allusion to a “Seraglio of Indian Squaws” and excessive drinking at a storehouse near Niagara suggest, darkly, that concubinage or sexual exploitation existed across the eighteenth-century Great Lakes landscape.[5] Other sources record marriage or relationships formed between British traders and Native women, some of whom were enslaved.

Descriptions of these varied experiences of colonial encounter are commonplace throughout Sterling’s letters. Readers see clearly that Sterling’s fur trade enterprise depended on the labor of Native men, free and enslaved Native women, French colonists, and enslaved Black men and women. Sterling was ignorant of this reality, and his discussions of workers, slaves, or hired help are often accompanied by slurs or maligning comments, or complaints about labor costs or inadequate work. At the same time, these glimpses reveal much about the identities and experiences of the multicultural workforce laboring at Detroit, a distant frontier of the British Empire. As procurers of furs, oarsmen, laborers, couriers, domestic workers, quarry workers, translators, and in a variety of other roles, these people’s labor enabled merchant James Sterling’s rise to prominence and stature in colonial era Detroit. 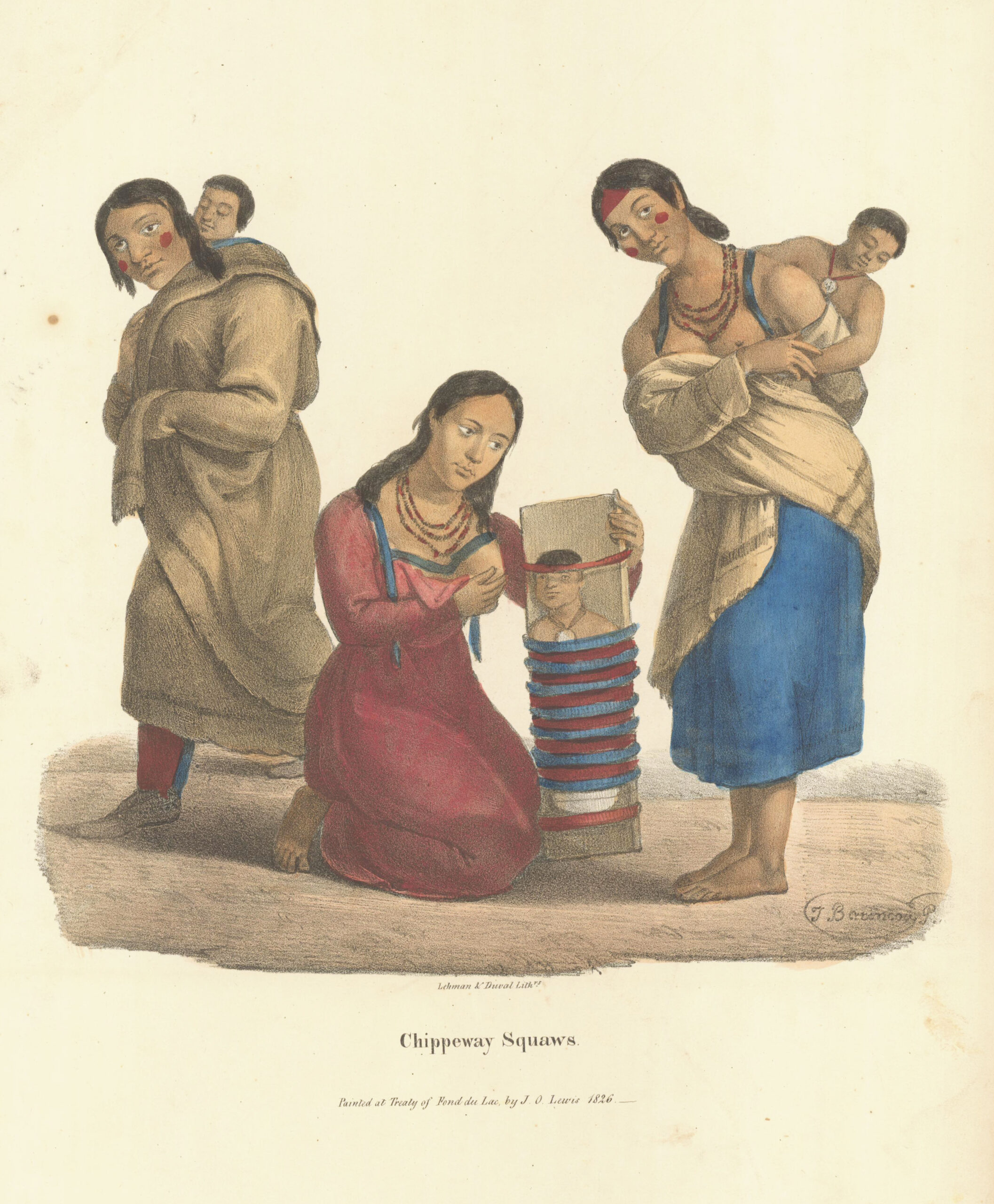 Chippeway Squaws / Painted at Treaty of Fond du Lac by J.O. Lewis 1826. Chippewa (Ojibwe) women and children depicted by James Otto Lewis around 1826. Part of a larger illustrated collection of Native American people and scenes and accessible via the Clements Library Image Bank.

[5] Literally, a Seraglio is the private rooms or apartments of wives and concubines in an Ottoman domestic space. James Sterling to John Duncan, 10 January 1762, James Sterling Letter Book.